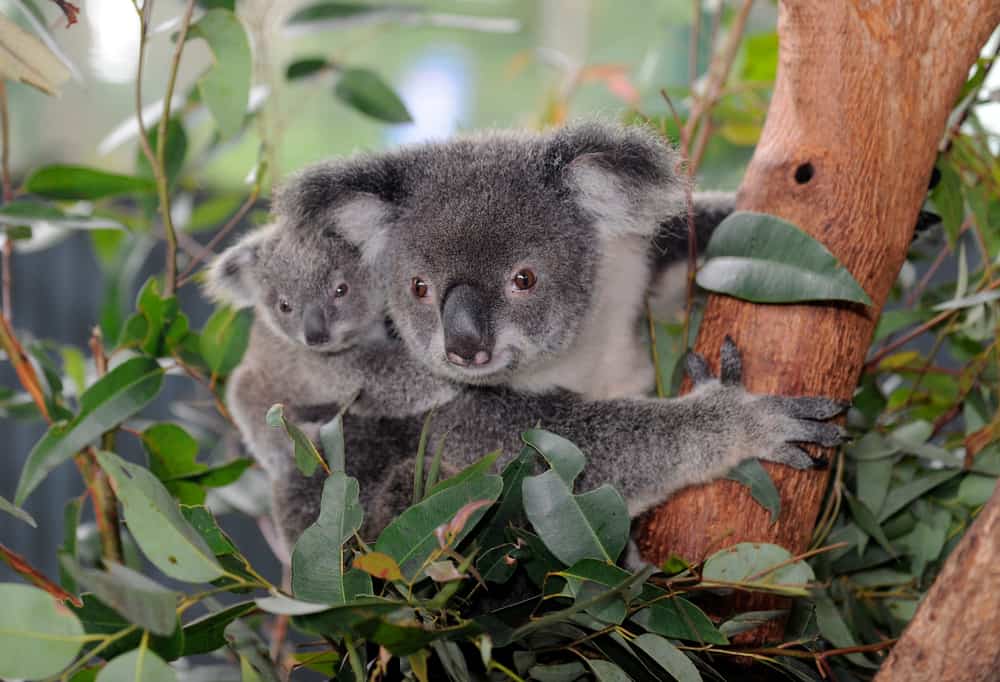 We’d not be surprised if you’ve never actually set eyes on a koala bear before, since these super cute marsupials are native only to Australia, and then only to the eastern and southern coastal regions of that vast country. The states in which koalas can be found in the wild include: Queensland, New South Wales, Victoria, and South Australia.

If you’ve never seen a koala before, you should know that they are simply some of the most adorable animals alive on this planet today. Chunky, soft grey fur bodies are topped with a big round head and two extremely fluffy ears above a big black ‘spoon-shaped’ nose. They are, to put it simply, the puppy dogs of the tree-climbing world.

Unfortunately, today koalas are categorized as an ‘Endangered Species’ and ‘Vulnerable Species’ across Australia, where a range of different factors (essentially all ‘man-made’) have cause koala numbers to drop dramatically in recent years.

In this article, it’s our hope that we can shed some light on these loveable creatures, and in doing so raise awareness to their plight, and to how best we can help to protect them and enrich their lives in the wild, and in captivity.

We’ll walk you through a koala bear’s lifestyle, its diet (both in the wild and in captivity), some interesting koala facts, and information on the factors threatening koalas’ survival.

Koala bears are truly unique animals. They are the only extant (surviving) member of their animal family Phascolarctidae and as such are somewhat of an anomaly in the animal world. Koalas spend much of their time climbing, eating, sleeping, mating, and even giving birth in the canopies of one very specific plant: eucalyptus trees. In more scientific terms, koala bears are tree dwelling mammals which lead sedentary lifestyles.

Koala bears, as we’ll soon come to find out, are very picky eaters, and the food that they like to consume is so low in calories, energy, nutrients and the like that koalas spend the vast majority of their waking day simply eating. In fact, koalas get so little nutritional value from the food they eat, that they have to sleep for up to 20 hours a day just to conserve the energy they need to eat for the other 4 hours!

When attracting mates, adult males shout in loud bellows designed to ward off predators (like dingoes and owls) and competition, whilst simultaneously attracting female koalas to them. Being marsupials (mammals which give birth to undeveloped young), koalas moms carry their new-borns (called ‘joeys’) in pouches below their bellies.

From their mother’s pouch, joeys are able to feed on a milk-like secretion produced by the female koala. Baby koalas eat like this until they are strong enough to fend for themselves, usually at around 1 year old. The koala mating season is regular, leading to koala births taking place between October and May, or between Australian Spring and early Autumn.

In the wild, if lucky and healthy, koalas can live to be up to 18 years old. 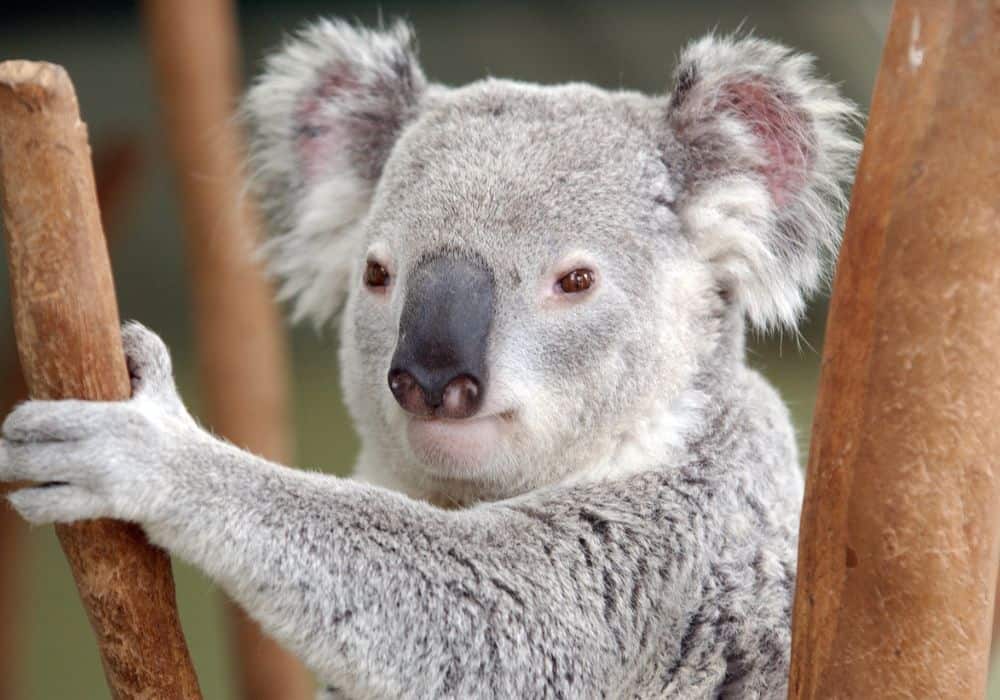 What do Captive Koalas Eat?

Perhaps the most well-known fact about koalas is that they have a very peculiar, and very specific, diet. But does this change when koalas are in captivity, compared to when they’re in the wild? The short answer is: no.

Koalas are so fussy about what they eat, that carers at conservation centers and zoos must feed them only what the koalas would seek out as food in the wild: namely, eucalyptus leaves.

There are over 600 different species of eucalyptus trees native to Australia and the Australasian Sub-Continent, and of these, koalas eat the leaves of just a few dozen varieties.

This is because eucalyptus varieties like Eucalyptus microcorys, E.  camaldulensis, and E. tereticornis are much higher in protein and other vital nutrients than the hundreds of other species available: a fact which koalas have adapted to over many hundreds of thousands of years of evolution.

Occasionally, koala bears will also consume the bark and leaves of native Australian trees like brush box, paperbark, and bloodwood trees, but at the end of the day they could not survive without the eucalyptus.

In captivity, koalas have the benefit of being fed a consistently appropriate quantity of fresh eucalypts by their carers. Carers also attempt to feed them a nice variety of different eucalyptus tree species, since different leaves contain different nutrients important to the health and wellbeing of koalas. 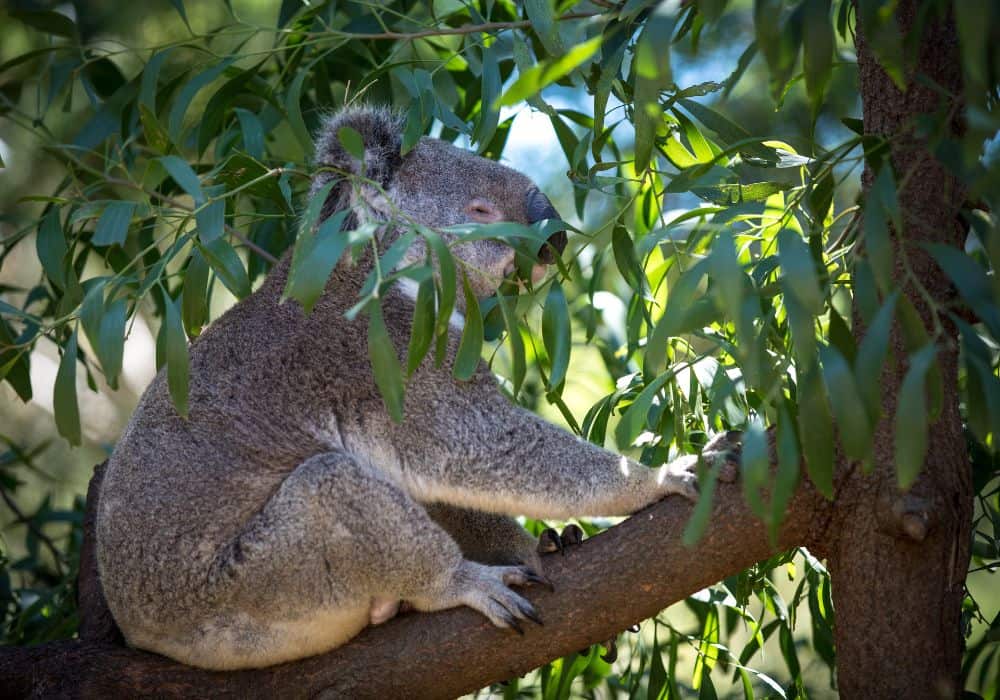 What do Koalas Eat in the Wild?

In the wild, koalas have been munching on the leaves of the eucalyptus tree for their entire existence, using their keen sense of smell and acute scent glands to seek out trees safe to eat. As herbivores, they evolved to live off these leaves, as one of the few reliable sources of protein around. Interestingly, however, a diet of eucalyptus leaves is not exactly particularly beneficial to any animal.

Eucalyptus leaves are so low in protein and nutrients, and so hard to digest, that koala bears spend the vast majority of their lives just processing these foods. Naturally, however, they’ve evolved a very specific physiology in order to do so.

Sharp front teeth in the form of vicious incisors, as well as grindstone-like back teeth molars, help koalas to chew the fibrous leaves. The koalas’ digestive system is also pretty special.

The leaves of the eucalyptus tree are actually toxic to eat. Koalas have an especially large organ called a caecum, located by the large intestine, which contains millions of bacteria that break down the dangerous toxins of eucalypts, enabling koalas to digest them safely. These toxins are produced in the gum leaves of the eucalyptus to stop predators from eating them – koalas clearly just earned how to outsmart this system! 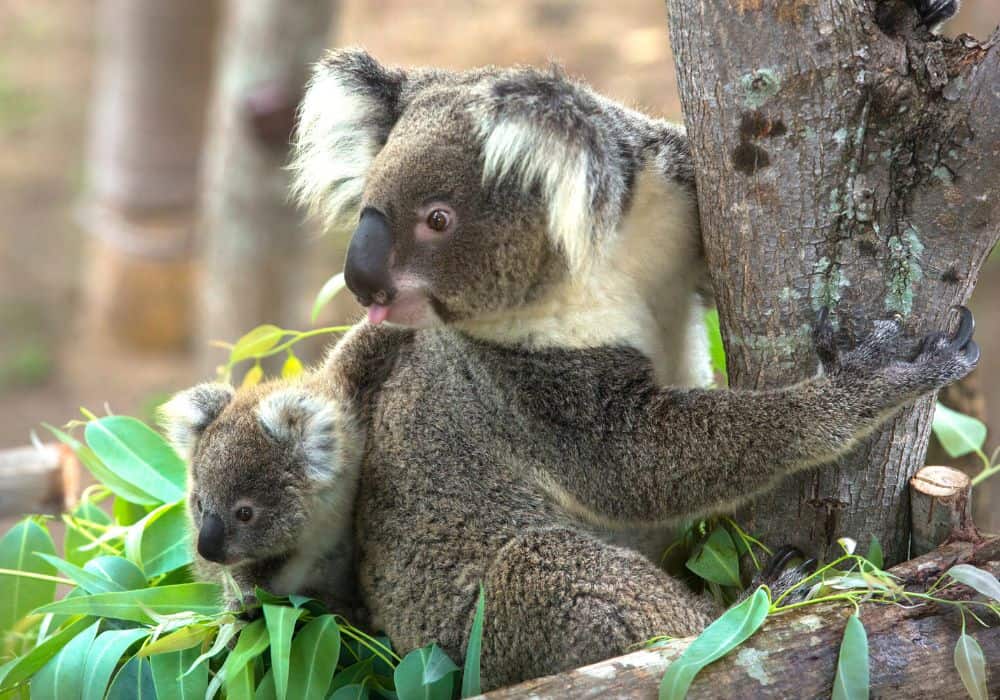 Why do Koala Bears hang out in trees all the time?

Koalas almost exclusively live in the treetops of eucalyptus forests, a little like most species of monkey and primate. But why, exactly? Well, the main reason is that the plant matter that comprises their diet takes so long to digest, they have to remain as close to it as possible in order to thrive.

In fact, koalas, though themselves weighing-in at just 9-33lbs, must consume 1-1.5lbs of leaf matter (453-679 grams of leaves) every single day just to stay alive. What’s more, the energy koalas derive from eucalyptus is so little that it would be wasteful, and ultimately dangerous, for koalas to spend it travelling down to the ground and back up again too often.

Instead, the vast majority of energy gained from their particular diet is used digesting their food. One other reason that koalas spend so much of their lives in the treetops is that there they are much safer from predators which have been known to eat their young, like dingoes. 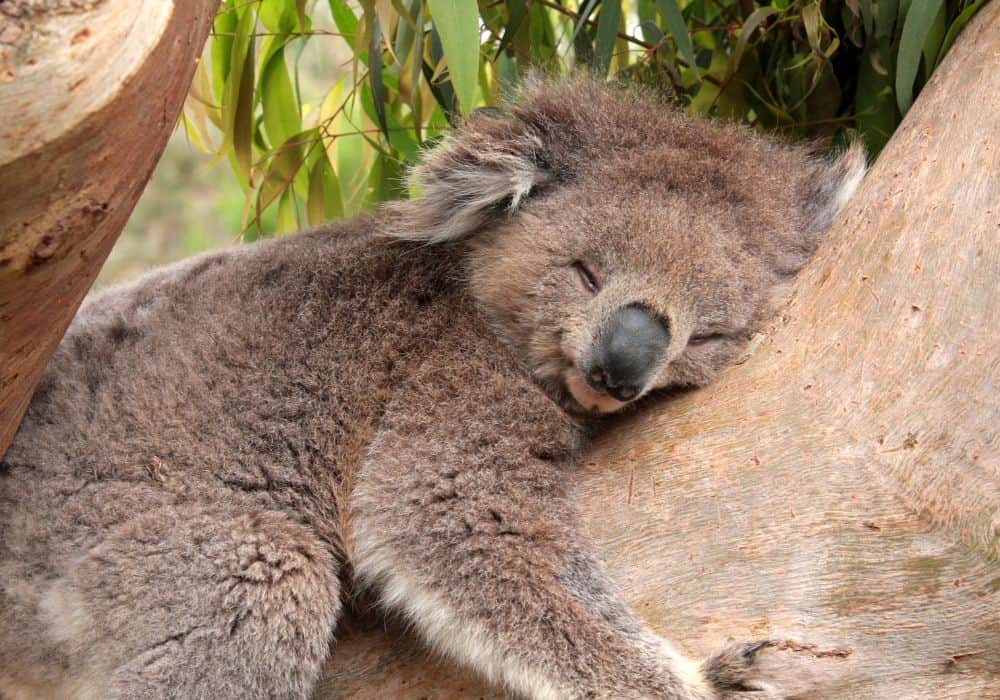 Interestingly, koala bears don’t really drink! Instead, they derive all of the water they need from the leaves they eat. Eucalyptus leaves have a relatively high water content, enabling koalas to rely on them solely for hydration (except in all but the most extreme of circumstances).

So yes, it may seem crazy, but even in one of the world’s most infamously hot countries, there exists a native species that never takes a sip!

Are Koala Bears even bears?

Good question. Koalas look like bears, they climb trees like bears, and they’re even called koala ‘bears’! Yet, despite all this, they aren’t actually bears at all. Koalas are instead marsupials: a very peculiar class of animal known for the pouches into which their under-developed young are born, and in which those young mature gradually, until finally being weaned from their mother’s milk and released into the wild to fend for themselves.

Do Koalas have thumbs?

Look closely, and you’ll see that koala bear ‘hands’ or paws are incredibly utilitarian. They’ve had to evolve to suit a life spent in the treetops, clinging to tree trunks and leaping from branch to branch. Whilst we humans have one opposable thumb per hand, koalas have two! Topped with sharp claws, koalas’ two thumbs oppose their three fingers, allowing them to climb with ease.

What does the word ‘Koala’ mean to Aboriginal Australians?

In some Australian Aboriginal languages, the word ‘koala’ is thought to mean ‘No Drink’, in reference to the fact that koalas never drink water, but instead derive all the moisture they need from the leaves they eat.

Koala butts are comprised of very strong cartilage, which in effect act as a seat on which koalas can comfortably rest, even in the most uncomfortable-looking spaces and on the knobbiest, snarliest branches!

Koala bears are facing an ever-worsening set of circumstances in the Australian wild. The expansion of human habitation, wildfires caused by the ongoing climate crisis, hunting, deforestation of koala territories, and resultant habitat loss are all great contributors to the declining populations of koala bears in the wild.

Today, the koala is defined as a ‘Vulnerable’ species in most areas, and an ‘Endangered’ species in others. In 2022, AFK stated that there may be, today, fewer than 43,000 koalas left alive, compared to a whopping 10,000,000 (ten million) at the beginning of the 20th century.

Human negligence and over-farming, as well as deforestation and our contribution to the climate crisis pose the greatest threats to koala bear survival.

Koala bears are not actually bears, but marsupials who spend the majority of their lives eating and processing the leaves of the eucalyptus tree, high up in the canopies of eucalyptus forests. They are incredibly unique and beautiful animals which we must strive to protect through conservation methods and an improved relationship to the earth and our climate.