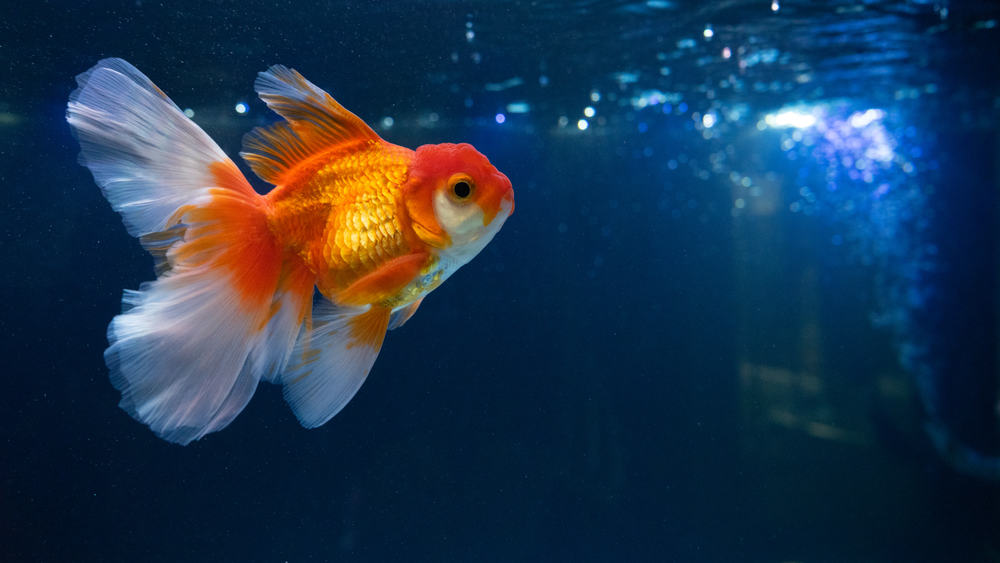 Goldfish is arguably the most popular fish to be kept at home. They make great pets because they’re easy to take care of and come in hundreds of different variations, so everyone can find the perfect variety to suit their preferences.

If you want to learn more about goldfish, this article is just for you. You’re going to learn everything you need to know about goldfish’s diet, from what kind of foods are the best, to how often you should feed it.

Goldfish are actually the first fish species to be selectively bred. It happened over 1000 years ago in China, where people started intentionally breeding goldfish to get demanded traits and features. As a result, there are several breeds and dozens of varieties of goldfish.

However, most goldfish raised in captivity grow up to 2 in (5.1 cm) in length, but it depends on the size of their environment, so goldfish kept in outside ponds can grow much larger, the biggest recorded pet goldfish reaching 15 in (38.1 cm) in length!

Similarly, their lifespan varies wildly. Most goldfish kept in fishbowls live just from 1 to 3 years, but some varieties kept in ponds can live as long as 40 years! Talking about varieties, there are over 300 different breeds of goldfish, and even more morphs or varieties. 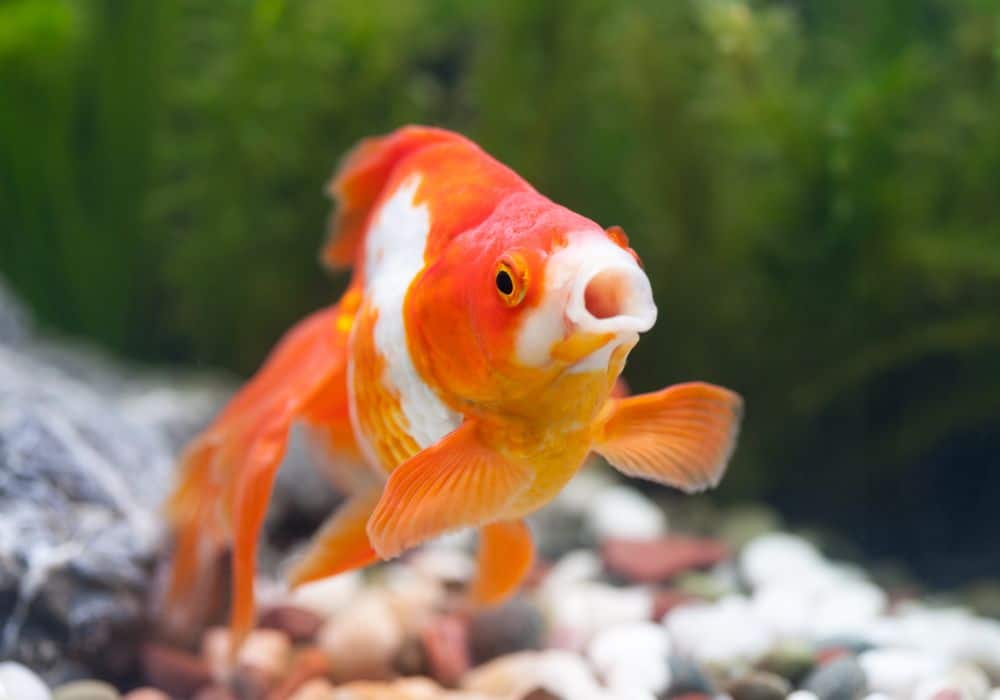 What Do Goldfish Eat?

In the wild, goldfish are opportunistic omnivores, meaning they will eat just about anything they encounter. As a result, they eat a varied diet consisting of both plant and animal material, getting both carbohydrates and protein.

It includes algae, aquatic plants, bloodworms, insects, fish eggs, larvae, tadpoles, and even other fish. Such a diet might seem too difficult to replicate at home, but it actually gives you a lot of options to choose from, and you can feet your pet goldish these foods:

This is among the most popular choices for feeding goldfish at home. Keep in mind that you should choose fish pellets that were specifically made for goldfish. Such formulas usually consist of more carbohydrates than protein compared to pellets made for other fish species.

The only downside of fish pellets is that most of them sink, meaning it’s difficult to remove those that were uneaten. Additionally, if you own a juvenile fish, pellets might be too big for them to feed on, so you might want to opt-in for other options.

Fish flakes are another manufactured fish food that is widely available in nearly every pet store. Just like with pellets, make sure to get flakes that were specifically made for goldfish. They’re great for feeding both, juvenile and adult goldfish, and include many nutrients.

The main downside of fish flakes is that they start decomposing quickly. If you don’t scoop uneaten flakes quickly, they will start deteriorating and ruining the water in the tank. Additionally, fish flake shelf life is usually shorter than fish pellets’.

Freeze-dried foods include small crustaceans and zooplankton like water fleas, daphnia, and brine shrimp. It’s frozen in such a way that moisture is drawn out in an instant, preserving most of the nutrients. Also, because such food doesn’t have any moisture left, it can literally be stored for decades.

However, this option is expensive and we recommend only supplying the diet of your goldfish with it, instead of basing the entire diet around it.

Frozen food is another option for occasional treats to spoil your fish. It preserves even more nutrients like minerals than its freeze-dried counterparts, but it has a shorter shelf life because it still contains moisture in the form of ice crystals inside.

Additionally, you need to thaw frozen food before feeding it to your goldfish. Most people leave some in the fridge overnight, but you might not be comfortable with having bloodworms close to your food.

This is the most nutritious option for your goldfish. It includes things like live brine shrimp, daphnia, types of worms, and even aquarium snails. Live foods are great because your goldfish has to prey on them, which stimulates living in a wild environment.

However, there are many downsides to feeding live food. First of all, you have to visit the pet store every day to buy some fresh animals, which is very inconvenient, especially if you have a busy schedule.

An alternative to that is buying bulk, but then you have to take care of the food itself until you feed it to your goldfish. Additionally, live food can come with parasites and diseases, which can infect your goldfish and have tragic consequences, sometimes even ending in death.

Unless you’re interested in growing your own live food, we recommend feeding it to your goldfish just once in a while.

As goldfish are omnivores, they don’t only eat meat, but also plant-based foods. That’s why you can supplement the fish flake or pellet diet with some vegetables, including unshelled peas, and leafy greens like lettuce, spinach, and kale.

You can also occasionally feed them small pieces of fruit like bananas, oranges, grapes, strawberries, and raspberries. They’re full of vitamins and will help your goldfish remain healthy. 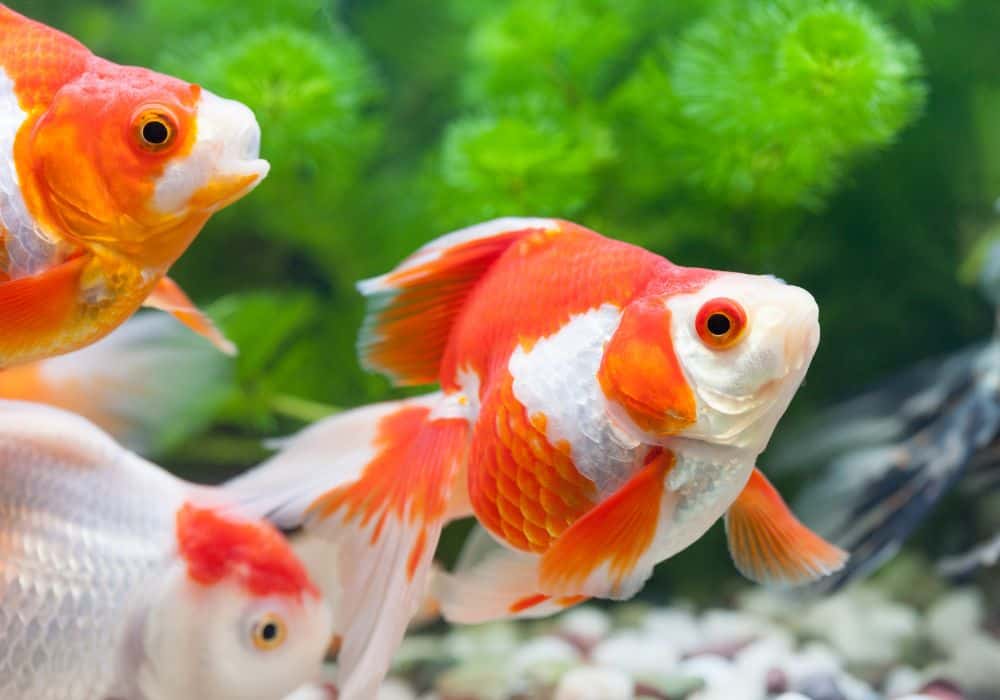 How To Feed Goldfish?

Appropriately feeding your goldfish depends on multiple factors, including its size, water temperature, and age. Naturally, bigger goldfish will require more food than smaller ones, and younger goldfish will need more frequent feeding than older ones.

It’s recommended to feed juvenile goldfish (younger than 1-year-old) twice or even three times a day. When your goldfish gets older than 1 year old, start feeding it once a day. It’s because metabolism decreases with age, and older fish requires less food.

There’s a useful rule of thumb which says that you should feed it food equivalent to the size of its eye, which usually results in 2-3 fish pellets.  However, avoid feeding it “as much as it can eat in X minutes”.

Goldfish are opportunistic feeders, meaning they eat as much as they find. If you just keep giving it food for X number of minutes, it’s likely to overfeed, which can lead to health problems like constipation.

If you notice your fish getting lethargic or bloated, it’s likely that you’re giving it too much food and you should start reducing the amount you’re feeding it.

The warmer the water, the faster the metabolism of your goldfish. If you’re keeping it at home in an aquarium that’s about 65 °F (18 °C) you should follow the usual feeding instructions that we explained above.

However, if you’re keeping your goldfish outside and the water is below 60 °F (15  °C) you should avoid giving it much protein in the form of animals (e.g., worms, shrimp) because the fish won’t have a high enough metabolism to use up all the energy it gets from such food.

Here are several things that you should keep in mind regarding feeding your goldfish:

While goldfish usually eat as much food as you give them, you’ll still have uneaten food in the aquarium. You should scoop it out as soon as you finish feeding your fish because food starts decomposing in water almost instantly.

As food is decomposing, it releases ammonia, and if enough of it builds up in the water, it will seriously harm your goldfish, even killing it.

If you’re giving your goldfish the occasional treat of bloodworms, brine shrimp, or some larvae, make sure you’re wearing disposable gloves. Even freeze-dried and frozen foods can come with parasites or diseases, that can infect you and your fish.

There are many products marketed as “Holiday Fish Food”, “Weekend Fish Food”, or “Slow Release Fish Food”, which are blocks of fish food that are slowly dissolving into bite-sized pieces so your goldfish can eat it.

As attractive as such an idea is, you should never use such products. If you have to leave home for a couple of days, don’t worry about your goldfish dying of starvation. If it was well-fed before, it can survive for up to 2 weeks without any food.

However, we don’t recommend not feeding your goldfish for any longer than 2 or 3 days. If you have to leave home for longer than that, ask your family or friends to come over and feed your fish.

Feeding bread to goldfish might be the single most frequent mistake new fishkeepers make. You should never do that because the bread will bloat up the gastrointestinal tract of your fish, leading to constipation and other health problems.

Some fishkeepers attempt to feed their goldfish mammalian proteins, including organs like the heart or liver, or even cooked protein like steak! You shouldn’t do it because goldfish aren’t capable of properly digesting such food.

If you want to guarantee that your goldfish gets all the necessary protein in its diet, simply feed it things like brine shrimp, aquarium snails, or worms.

We hope this article told you everything you wanted to know about feeding your goldfish. We wish you all the best in your fishkeeping journey!

1 thought on “What Do Goldfish Eat? (Diet, Care & Feeding Tips)”