Hornworms are one of many insects we incorrectly call “worms”. In reality, these interesting creatures are the caterpillars that later in their life turn into the large Sphinx moth. They have “worm” in their name largely because people back in the day didn’t care much about the difference between worms and caterpillars. As for the “horn” part, that’s due to their interesting appearance and the thin red “horn” coming out of their backside.

Now that we know what hornworms actually are, however, the next question is what do hornworms eat? Are they a pest in the wild? How should they feed them if they are a pet? Or, maybe you’re looking after them just as food for another pet of yours? Let’s go over each case one by one.

As caterpillars for the rather large Sphinx moth, hornworms live in this stage of their way for no more than 2 to 3 weeks. They spend that time eating as much food as they possibly can before burying in the ground as pupae chrysalis. After that, they emerge as their true selves – the large adult Sphinx moth or hawk moths.

Despite the short time these insects spend in their hornworm phase, they can still cause a lot of damage to farmers’ crops. That’s why they are often seen as pests by many people. Alternatively, when looked after at home, they will need quite a bit of food to grow well and healthy.

On average, hornworms grow up to 4 inches long (~10 cm) and about 4 grams in weight. To achieve and maintain that physique, however, they need to eat 16 grams of food every day, whether they are in the wild or in captivity – that’s 4 times their body weight.

What Do Hornworms Eat in the Wild? 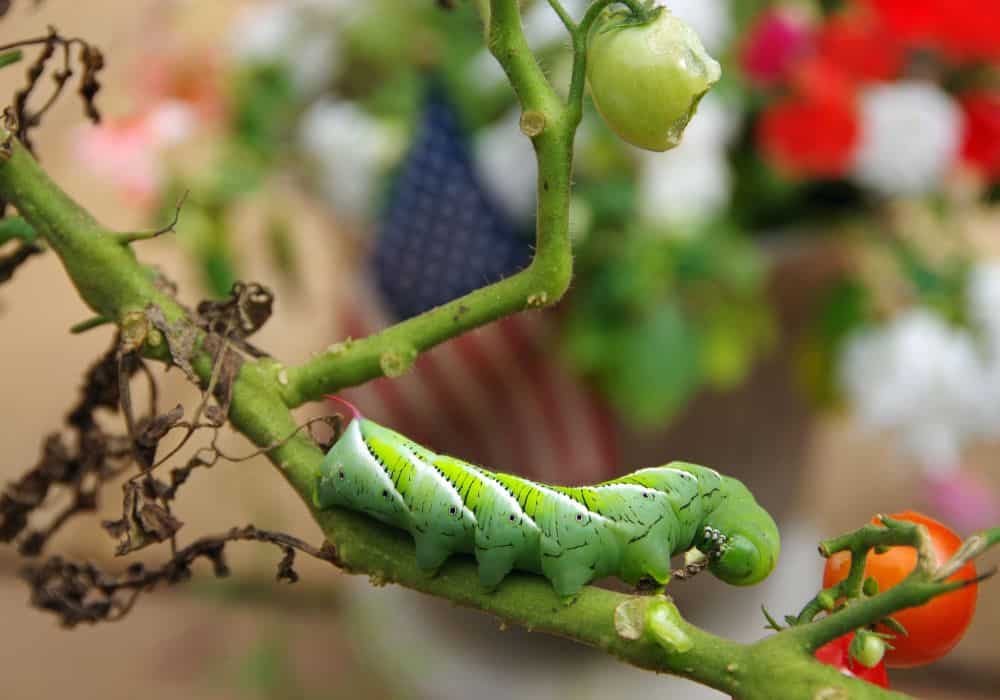 The reason why hornworms go after nightshades so passionately in the wild is twofold:

The other members of the Nightshade plant family hornworms tend to go for include:

Still, with over 120 hornworm species in North America and over 1,200 worldwide, it’s often difficult to know which type you’re dealing with.

So, the safest bet for farmers usually is to just assume all their nightshade plants are at risk if they start seeing large moths fly by or the hornworms themselves crawling around.

Hornworms aren’t harmful to people but they can wreak quite a bit of havoc in a farmer’s fields. A single hornworm eats about 16 grams of leaves a day so that’s several hundred grams through its 2 to 3 weeks lifetime. That doesn’t sound like much but that’s basically a whole tomato plant ruined.

And when you consider that hornworm moth infestations usually include numerous moths and an incalculable number of moth eggs that hatch into hornworms – it’s not uncommon for entire fields of tobacco or tomatoes to get devastated in a matter of days.

In that sense – yes, hornworms are quite harmful. But it’s not all bad for two main reasons:

While hornworms are nasty when they latch onto the wrong plant, they can be repelled via several different methods, including natural ones. And if you’ve managed to repel the moths from laying their eggs directly under their produce, there’s no harm done if they do so somewhere outside of your property.

What’s more, the moths the hornworms turn into are actually beneficial both for the environment as a whole and for our crops. That’s because – just like butterflies and bees – moths act as pollinators. So, they are essential for the whole ecosystem and the well-being of all the flora in it.

How to Control and Prevent Hornworms

So, how can we prevent a hornworm infestation in the middle of our tomato field, preferably without losing the beneficial effect of the moths’ pollination? Well, there are a few proven methods to consider:

How to Feed Hornworms in Captivity?

Now that we covered how to deal with hornworm pests in your garden, let’s look into raising these caterpillars at home yourself. If you don’t have nightshade plants to worry about, there’s no harm in looking after hornworms as you don’t have any crops for them to harm.

There are two main reasons why you’d look after hornworms at home:

If you want to raise hornworms into moths just for the sake of it, you can just feed them their natural diet – tomato or tobacco leaves as well as other easily available nightshade plants.

There is a problem, however, if you’re raising your hornworms as pet food – if you feed your hornworms with nightshade, they will become poisonous and may harm your pets. As we said above, that’s one of the hornworm’s defense mechanisms. Some reptiles would be immune to that but many others aren’t.

In such cases, you’re going to have to look for a different hornworm chow such as broccoli, mashed celery, spinach, collard greens, dandelion leaves, mulberry leaves, or commercial paste pet food that usually includes ingredients such as wheat germ, agar, yeast, dandelion, linseed oil, grapevine leaves, and others.

Hornworms can either be an annoying pest to have to deal with, a fascinating pet to raise, or pet food to keep well fed for your amphibian or reptilian pets. In either of these three cases, it’s important to know exactly what hornworms eat and how to approach the particular situation in the best possible way.