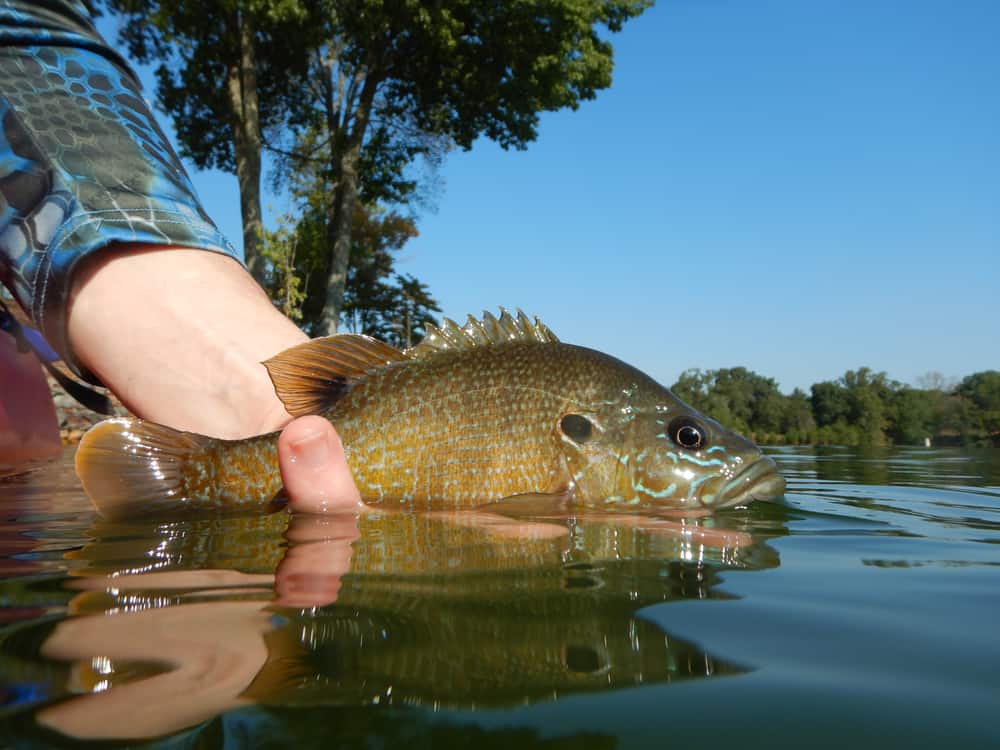 Bluegill are a common and tasty panfish enjoyed by anglers and cooks throughout North America and beyond. They’re also a popular choice with aquarium enthusiasts and pond owners.

Today, we’ll be taking a look at what bluegill are, how they live and feed, and how you can prepare and cook them yourself! 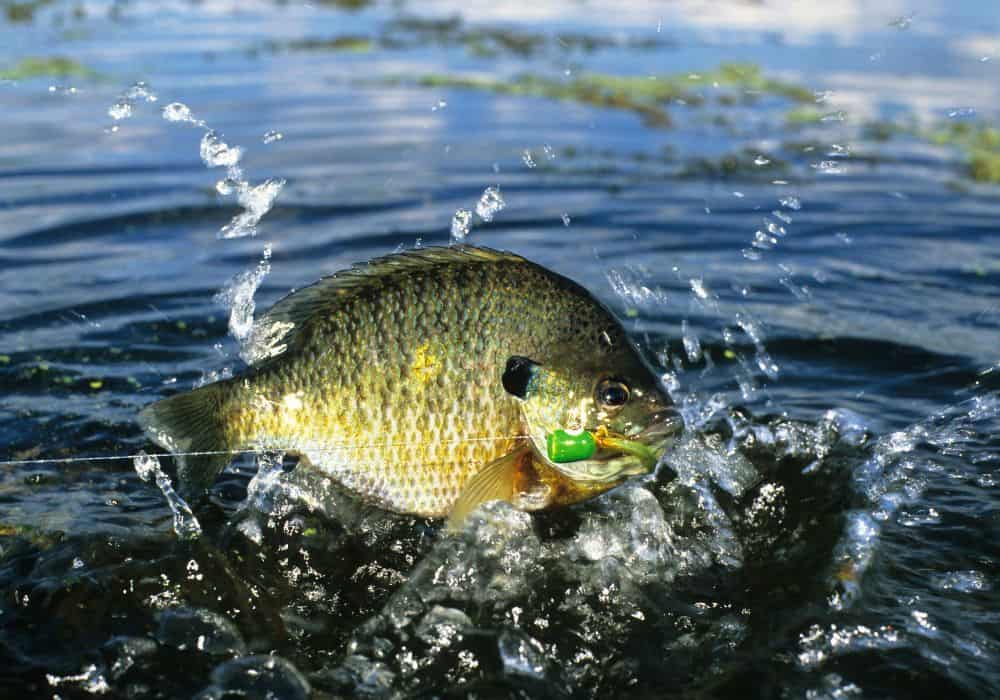 Bluegill are one of the most widely known freshwater fish, found in lakes, rivers, and ponds throughout the Central and Southern United States. They originated East of the Rockies, with native habitat all the way from the Virginian coast down to the swamps and mangroves of Florida.

Due to their popularity, ease of fishing, and versatility in the kitchen, the species have by now been introduced further afield. Today you’ll find them in ponds, lakes and rivers across the globe, in Europe, South Africa, South America, Oceania and Asia.

Bluegill’s popularity is also due to their relatively small size and fryability! Their broad, flat shape makes them ideal for skillets and flat-based pans.

They usually only reach between 6 and 9 inches in length but can also be feisty at the end of a line. This makes them perfect for both casual and keen anglers looking for a manageable but fun challenge to reel in!

You might also hear bluegill referred to as sunfish, copper nose, brim, bream, or perch (if you’re in the Southern States). The latter two names are particularly common in the kitchen.

What do bluegill eat in the wild? 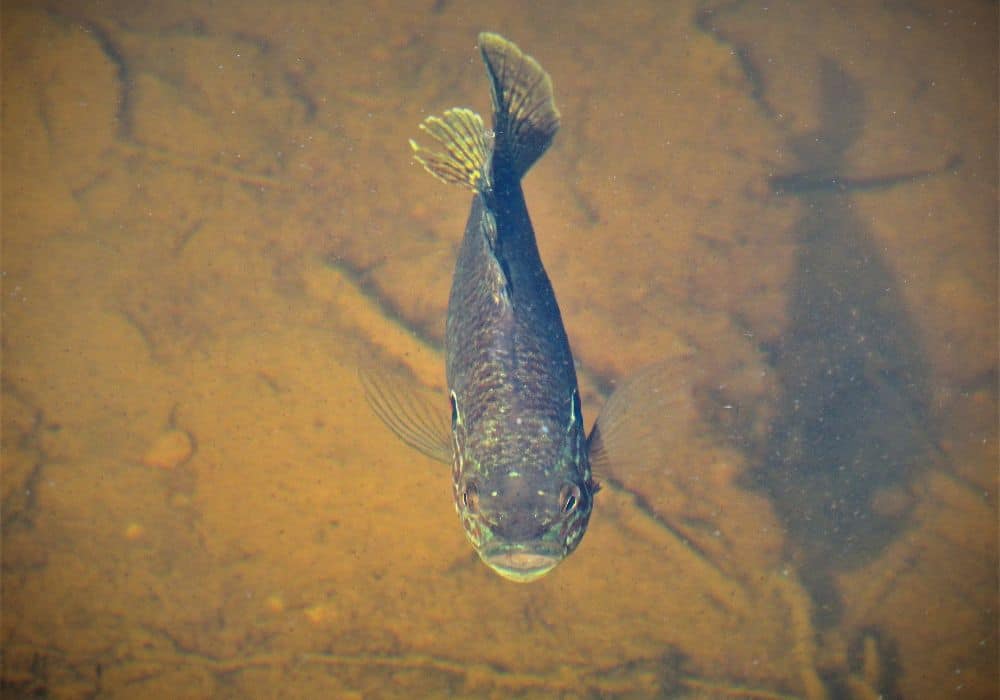 A bluegill’s diet changes as it gets older. After developing from spawn (fish eggs), young bluegill will often start out eating zooplankton. These are a type of microscopic organism plentiful in healthy, freshwater ecosystems.

As the fish get bigger, they will gradually start to eat larger and larger organisms. Young fish will eat copepods (tiny crustaceans), small insects, and water fleas. Larger, adult bluegill will go for insect larvae, shrimp, small crayfish, worms, snails, minnows, and other little fish. In desperate times, adult bluegill may even prey on their own species!

Bluegill often feed more heavily in the early morning and in the evening. During colder seasons, when animal-based food isn’t as readily available, bluegill can sustain themselves on algae and other aquatic vegetation.

What do bluegill eat in captivity? 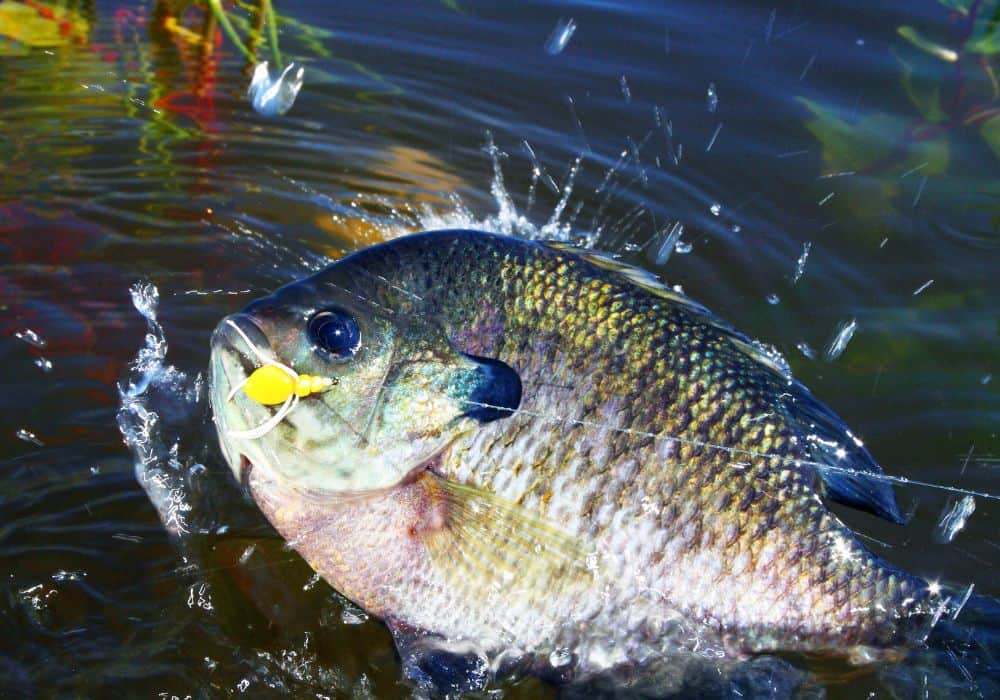 Since bluegill have such a broad appetite, it’s often not difficult to find either traditional bluegill prey or commercially available fish food in order to keep your captive bluegill going!

You can feed bluegill minnows, freshwater shrimp, crickets, mealworms or grubs. Many of these can be found in good pet stores. There is also plenty of commercially available, specially prepared bluegill fish food out there. Popular brands include AquaMax, Purina, and AquaNourish.

If you are trying to grow bluegill for the purpose of producing large, trophy fish, you’re likely going to want to invest in an automatic feeder. One which dispenses high levels of nutrients regularly is going to be key in ensuring your bluegill grow as big as they possibly can. Commercial fishing ponds will often want their fish to grow large for their angling clients.

In the wild, bluegill are prey to a number of predators. Due to their relatively small size, some larger fish such as largemouth bass, trout, and northern pike can target bluegill for food. Turtles are also known to eat bluegill.

Bluegill also have predators that live outside of the water. Birds such as herons and kingfishers will regularly target the fish.

Mammals can also eat bluegill. Otters have been observed to be bluegill predators and raccoons are also believed to be capable of catching them for food.

What is the best bait for bluegill?

Bluegill are loved by anglers because they will often go for a range of baits and can be surprisingly relaxed near humans. Many will eat food dropped directly into their water. There’s even one population of bluegill in Lake Scugog, Canada, that have become so relaxed around humans they even allow themselves to be ‘petted’ by tourists!

Live bait such as worms, crickets, grasshoppers, flies, maggots, small frogs, or minnows can all be used to coax bluegill to the line. They can also go for table scraps such as bread or corn.

Artificial bait and lures can also work well, including fake worms, spinners, crankbaits and poppers. Like some other freshwater fish, bluegill are sight feeders often drawn by vibrant colours. Orange, yellow, green or bright red are all worth trying.

Remember that bluegill are warm water fish. They feed most actively when the weather is temperate. During the cooler months, many bluegill will not bite or go for live–bait at all. If you are fishing during the colder months, you can try reducing your bait-size. Mini grubs such as wax worms are sometimes used by ice fishermen as their small size can coax even winter bluegill into biting.

How do you clean and cook bluegill?

So you’ve landed a healthy catch and fired up the pan. Not sure how to prep your fish before you cook it? Don’t worry, we have you covered. Here’s a simple method for cleaning, prepping, and then cooking bluegill using no specialist equipment. We’ve also included a little tasty recipe for you to get the most out of this delicious panfish!

Equipment you will need

Ingredients you will need

Clean your bluegill. They’re going to be scaly when they come out of the water. Scrape the scales off of both sides using either a dedicated fish scaler or a dull knife.

You do this by running your descaling tool down the sides of the fish from tail to head. This means you’re running it against the direction of the scales. Going the other way isn’t going to remove anything, you’re just going to be smoothing the scales down!

You want to keep scraping until all scales are removed on both sides. This should make the fish feel smooth.

Remove the head. You’ll need a very sharp knife for this and for the remaining steps.

You can cut the head off entirely, just behind the gills. Discard or, alternatively, remove the brains and use to make a fish stock!

Gut and debone the bluegill. Gutting is the term given to removing the innards of the fish prior to cooking. You want to be eat the flesh of your catch, not the internal organs!

Using that sharp knife once again, make an incision along the belly of the bluegill. Start from the tail and cut all the way up to where the head was.

You can then ‘butterfly’ the bluegill, which is a term meaning you remove the spine and attached bones from the flesh. In other, larger fish such as salmon or bass, you may fillet your catch by cutting the flesh away from the bone.

Check out this instructional video for more fish filleting advice!

Remove all the internal organs and discard.

Still got that sharp knife? Good, we told you you’d need it! Now you’re going to use it to cut off the tail and fins of the bluegill. By this point you’re almost ready to start frying!

Prepare your bluegill for the pan. This is where the mouth-watering part begins – there are many ways of cooking bluegill, including just seasoning and pan frying in some olive oil or butter. Some people also deep fry bluegill whole for a real decadent treat.

We recommend the following though, for a little added crunch. It also uses less oil than deep frying and is therefore a touch healthier.

Dip your bluegill in well-beaten egg or melted butter, then coat in a crushed up mixture of graham crackers, salt and lemon pepper.

Now for the sizzling – heat a good, heavy skillet pan with your cooking oil on medium-high heat. Make sure you let it get hot so that when the fish hits the pan, you hear it sizzle. This will help with the texture of the fish.

Fry your bluegill for roughly 5 minutes on either side and remove.

It’s now ready to be drizzled with lemon, scattered with dill or parsley, and served straight away! We also recommend having a little pot of mayonnaise on hand for dipping.

Mouth buds tingling yet? There’s a reason bluegill are such a popular fish, from habitat to plate. Whether targeted for trophies or for taste, few panfish have grown to be as widely loved and sought after as this species.

From their humble origins on the Eastern plains and grasslands of America, to the fishing lakes and rivers of the world, we hope that with proper conservation and preservation of ecosystems bluegill can continue to be enjoyed for generations to come!