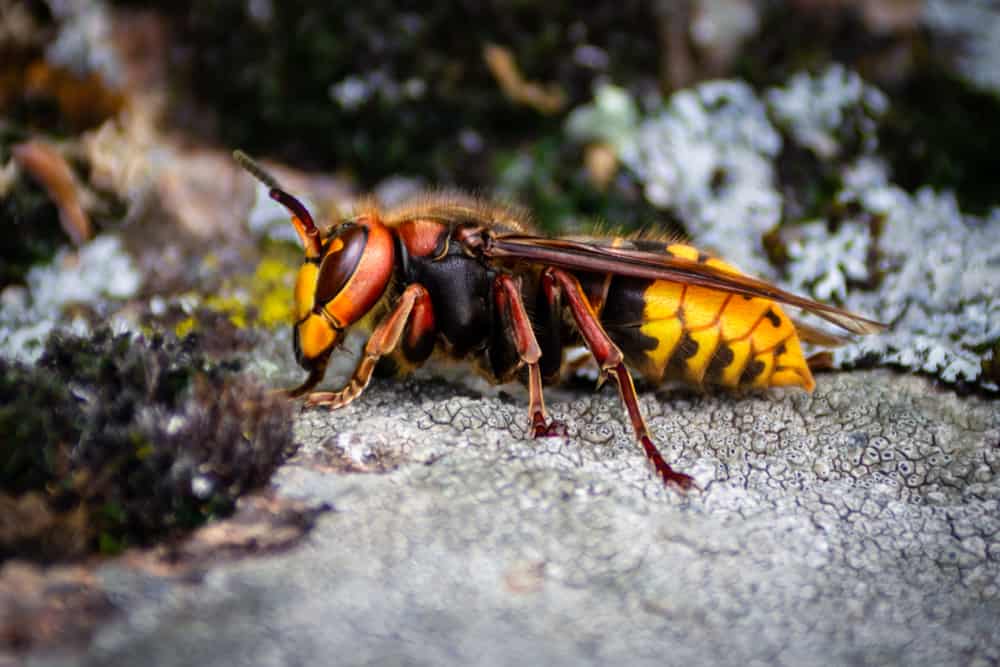 Some people view these insects as a nuisance, but if more people knew what hornets do, I’m sure misunderstood insects wouldn’t be looked upon with ire.

So if you’ve recently asked “what do hornets eat,” this article is for you. Let’s get started!

1. The Physical Characteristics of Hornets

As part of the wasp family, hornets look similar to yellow jackets, but there are some physical characteristics that these two species don’t share. For one, an adult hornet will grow to be about 3/4 of an inch, whereas yellow jackets are slightly smaller.

Hornets have a robust body and they sport yellow, white, and black markings. A hornet’s body texture is even, and when its wings are not being used they retract from front to back. Unlike bees, hornets are hairless and they won’t die after they sting.

There are many species of hornet, and most of these species populate the northern hemisphere. European hornets, in particular, can be found throughout Europe (east and west) as well as in the parts of Russia that are not in an extreme climate.

Asian Giant Hornets are another kind of hornet, and they live in parts of Russia, China, Taiwan, Korea, Cambodia, Vietnam, India, Sri Lanka, Thailand, and Laos. There’s also a high population of these hornets in Japan, where they’re called the “giant sparrow bee.” The Asian hornet has also been found in several European countries, including Portugal and Spain.

The Oriental Hornet can be found throughout several Middle Eastern countries, and they’re also found in Italy, Albania, Romania, and Greece.

Hornets mainly live in meadows, orchards, and woodlands, and they can be found in both urban and suburban settings as well. Hornets prefer to have a paper-like nest, one that’s made of pulpy wood fibers.

Worker hornets can live from 12 to 22 days, whereas a queen can live up to a year. How long a hornet lives largely depends on its habitat and the kind of species it is.

Although hornets are pest-controlling predators, they don’t only eat other living organisms. They’ll eat tree sap, bark, leaves, and fallen fruit as well. The pests included in their diet are bees, flies, caterpillars, other kinds of wasps, grasshoppers, and crickets.

Unlike yellow jackets, a hornet will not scavenge, as it acts predatory most of the time. If you’re out on a picnic and a hornet buzzing around the food, you may think the insect is enticed by this, but this may not be the case.

It’s more likely there are flies, and the hornet wants to eat the—not your delicious potato salad. Generally speaking, hornets don’t eat wood, but they do use wood cellulose and saliva to make their nests.

Hornets will also consume honeydew, nectar, and other sweet liquids. Their larvae field on animal carrion, prepared meat, and soft-bodied insects. You may see hornets eating meat out of your trash can or on roadkill; they do so because they need protein. 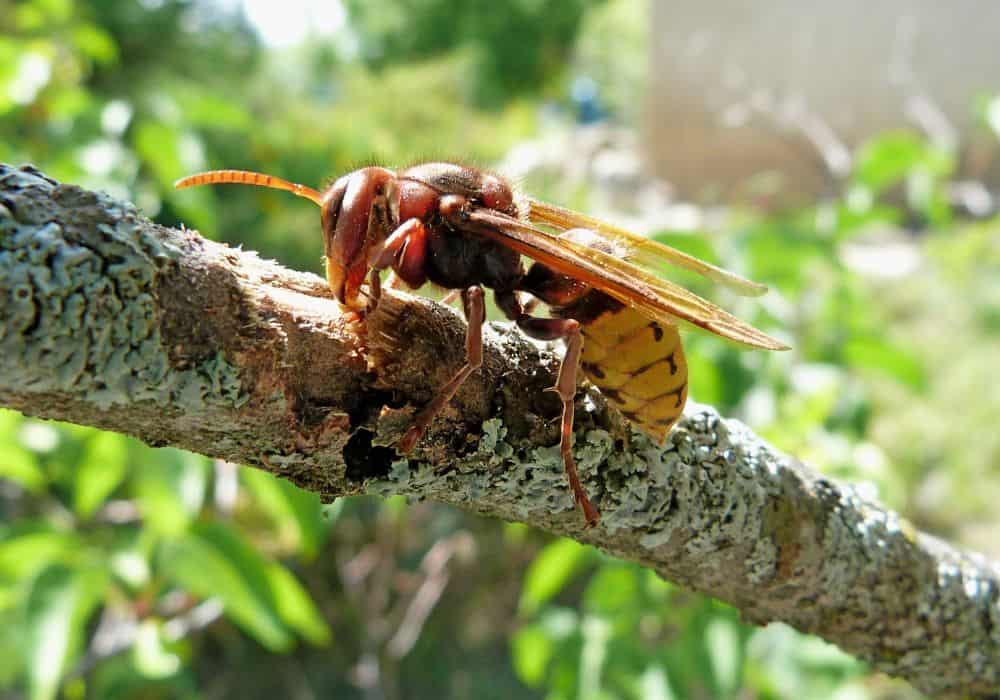 They are omnivores, and they possess a powerful mandible that can make easy work of cutting through meat. They also bring back meat to their larvae to help them grow. If you don’t have hornets on your property, make sure there are no dead animals in your yard and that your trash is either away or securely enclosed in a trash can.

And hornets don’t just have a taste for natural sugar, as they also like refined sugar. For this reason, you could find a hornet drinking your soda or landing on your candy.

Although hornets and bees are usually grouped together, bees are actually prey for hornets, and bee pupae often serve as food for hornet larvae after a hive raid. Beehives should be eliminated wherever they exist on your property, as they can invite a hornet infestation.

Vinegar is not a staple of a hornet’s diet, but when mixed with sugar it’s an effective bait that can get rid of hornets. The sugary scent will attract a hornet to a trap.

So, for example, if you have a fruit tree and a lot of the fruit is rotten, hornets may be the reason why. To test a trap, put it near the tree (where you suspect there to be a lot of hornet activity) and see how many hornets can be lured into the trap.

4. Do Hornets Change Their Diet Seasonally? 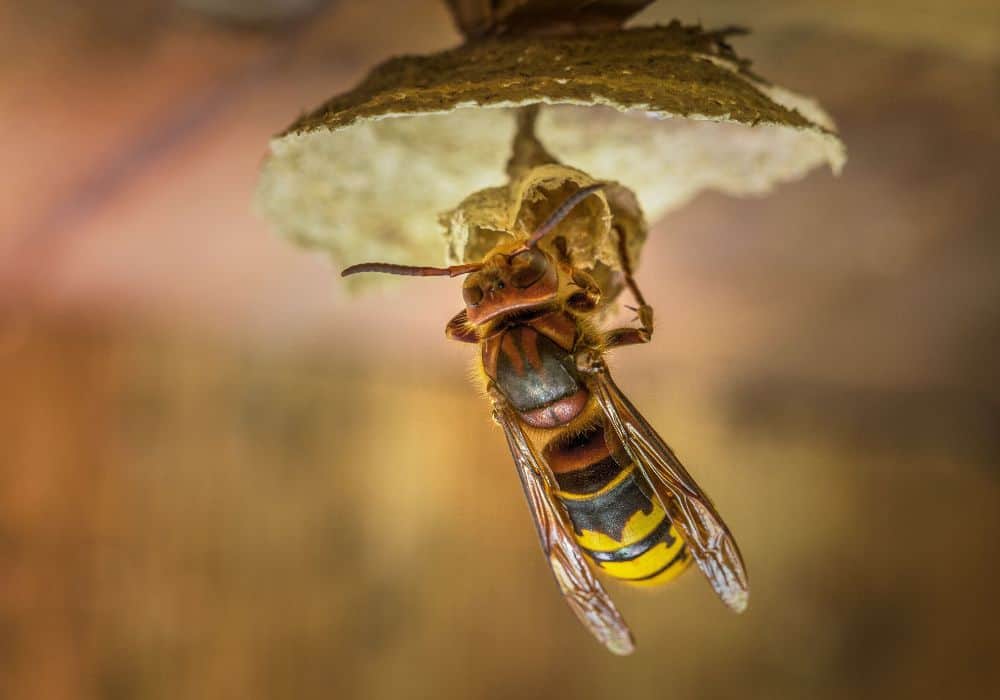 Hornets usually show up in the summer, and during the latter part of the season, they have to change their eating habits because of the shrinking supply of prey. But in the early part of the season, a hornet will be focused on getting protein sources instead of carbohydrates.

At the beginning of summer, a hornet will not seek out sugary sources of food, but they can go as far as a quarter of a mile away from their nest to get food that’s rich in protein and ideal for feeding the queen and larvae back at the nest.

Towards the end of the summer, a hornet will find it hard to get meat for its larvae, and at this time it will go looking for sugar. And often human food is where a prime source of sugar for a hornet.

5. How Much and How Often Do Hornets Eat?

Throughout most of the day, a hornet is working to build its nest and provides food for its larvae and queen. Hornets work day and night, and only in the early morning hours is a hornet’s work done.

Once the sun stirs up the nest in the morning, a hornet will go out looking for food, not just for itself but for others. Hornets don’t overeat, in large part because they’re communal insects; they are more concerned with getting food back to their hive.

6. What Are Hornets’ Special Eating Behaviors? 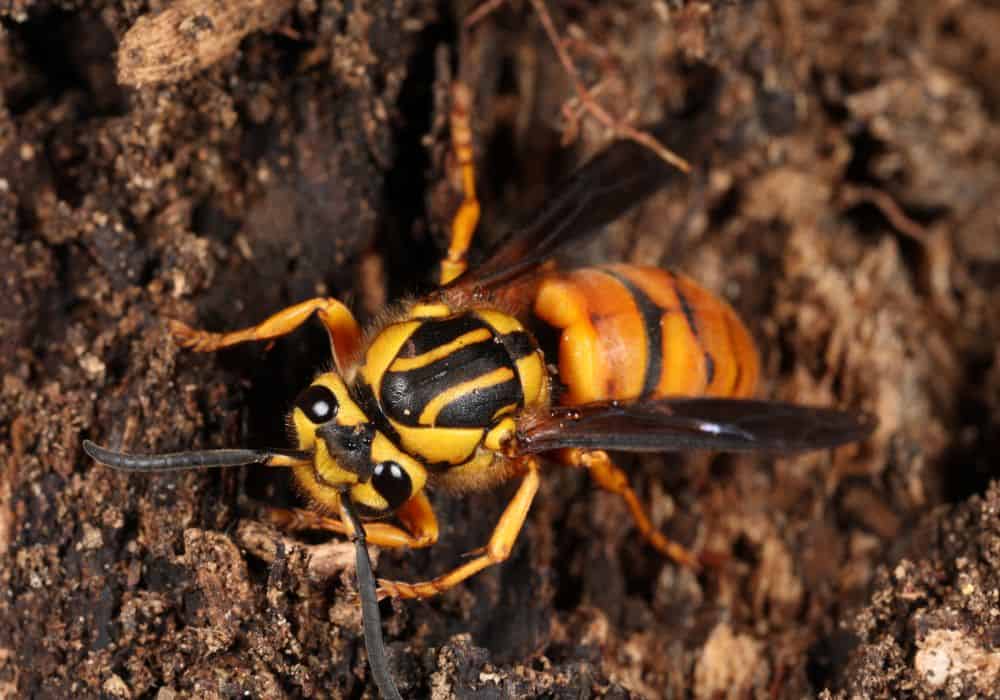 Hornets, like other kinds of wasps, are mainly focused on the sustenance of their young and their queen; some even prioritize the sustenance of others over sustaining themselves, and while this eating habit isn’t unique in the insect world, it’s significant enough to point out.

They will eat tree bark, sap, and other insects in just one meal, as they’re chiefly concerned with getting enough energy so they can do their work for the day. Worker hornets usually eat outside the nest, whereas their larvae and the queen eat inside.

These pest-eliminating insects are certainly misunderstood, and if more people understood their purpose in the world, there wouldn’t be so many methods for getting rid of them.

Of course, it’s annoying when a hornet tries to get into some human food, but this is usually a last-ditch effort for a hornet. Therefore, humans shouldn’t be all that bothered by hornets. Moreover, humans should understand the hornet’s diet so they can help these insects.

1. What Are Hornets Most Attracted To?

Every day, hornets—like other wasps and honeybees—are focused on getting, food, water, and shelter for their communities. When it comes to food, most hornets prefer to eat tree sap and tree bark because it’s widely available and easy to get.

But if a hornet is a successful hunter, it’s likely they’ll use these skills and prefer eating pest insects like flies and moths.

2. Do Hornets Have Any Purpose?

Having a population of hornets on your property is a great way to control pests in a natural way that won’t harm your plants or you. Hornets do not go out of their way to harm humans, and if you stay out of their way they will provide a world of good while presenting few (if any) downsides.

Hornets play a vital role in their habitats, keeping pest populations down and ensuring that their hives are functioning, and producing the materials and food other organisms need.

If you have hornets as pets, you should feed them organisms and flora that they’d eat in their natural habitat. It’s easier to get fruits, bark, sap, and leaves for hornets, but this doesn’t mean your pet hornets should go without eating pest insects.