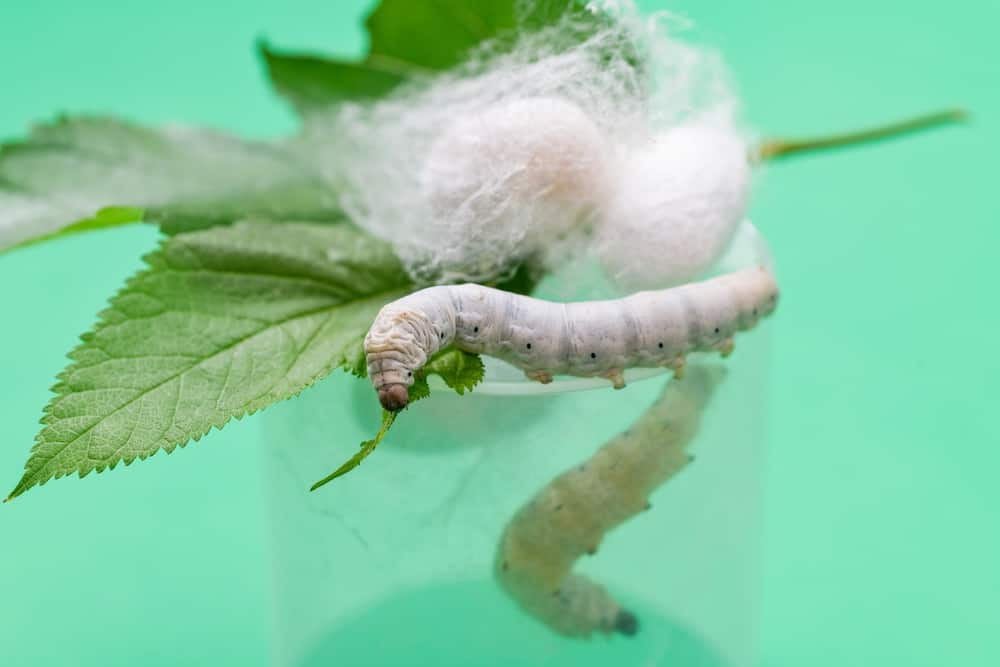 Of all the millions of insects on the planet, few have been cultivated by people quite like the famous “silkworm”. Like many other things we call “worms”, the silkworm is actually not a worm but the caterpillar of the domestic silk moth. And what makes this caterpillar/worm special is that when it cocoons to turn into its adult self, said cocoon produces tiny threads of precious silk – hence why we cultivate these insects.

Naturally, there is a lot of awesome history and fascinating things to know about the silkworm. Plus, if you want to try looking after these insects, we’ll cover what do silkworms eat and how to breed them properly below.

The production of silk out of silkworms was a mystery for most of the world except China for thousands of years. This had turned silk into one of the most valuable and highly sought-after commodities of the old world. Yet, even though today we know all the secrets of silkworm farming – or sericulture – the practice is still pretty rarely attempted on a larger scale because of how tricky it is and how much effort it requires for mass production of silk.

But how exactly do silkworms “work” and what are the basic silkworms facts you need to know first?

The history of silkworm farming

Bearing the cool scientific name Bombyx mori Linnaeus, the domestic silk moth first started being cultivated for its cocoons’ silk some ~5,000 years ago in China. The Chinese quickly realized the huge potential of this moth and managed to keep it a secret from the entire rest of the world for thousands of years.

By doing this, the Chinese not only managed to create a great deal of silk for themselves but also started the incredibly lucrative Silk Road trade route across all of Asia and into India, Europe, both Northern and Eastern Africa, as well as parts of Oceania.

Of course, the Silk Road route was not a single route – it was a large network of numerous interconnecting routes by both land and sea that covered much of the known world at the time (1) (2). What’s more, big parts of these routes were actually run by traders from India, the Persian Empire, Arabia, and others.

This led to a lot of friction between the Chinese silk manufacturers and traders and the “middle men” that sold the precious fabric to the west and south, often culminating in wars over territory and the trading routes of the valuable thread. Such was the case, for example, in the 1st century BCE when the Chinese general Pan Chao managed to drive out the Parthians from the Tarim basin region to bypass them and get in direct contact with the Roman Empire – one of the biggest export markets for Chinese silk at the time.

Still, even with all these conflicts, the people of China managed to safeguard the secrets of their silkworm farming for thousands of years. And many did try to steal those secrets even the Roman Empire sent envoys and spies from the other end of the world to get the instructions for silk production.

Legend has it that the first time the silkworm’s secrets managed to leave China was in 552 AD when yet another Roman envoy, this time sent by the East Roman emperor Justinian sent two monks on a “diplomatic” mission and they managed to sneak out some silkworm eggs in bamboo walking sticks they had taken as “souvenirs” from China.

Since then, sericulture has been attempted and occasionally managed throughout the rest of the world. Yet, to this day, some 90% of silk production still occurs in China and India, with the other 10% taking place in Uzbekistan, Vietnam, Thailand, North Korea, and Brazil, with the South American country being the only major producers and exporter outside of Asia.

What do silkworms eat? 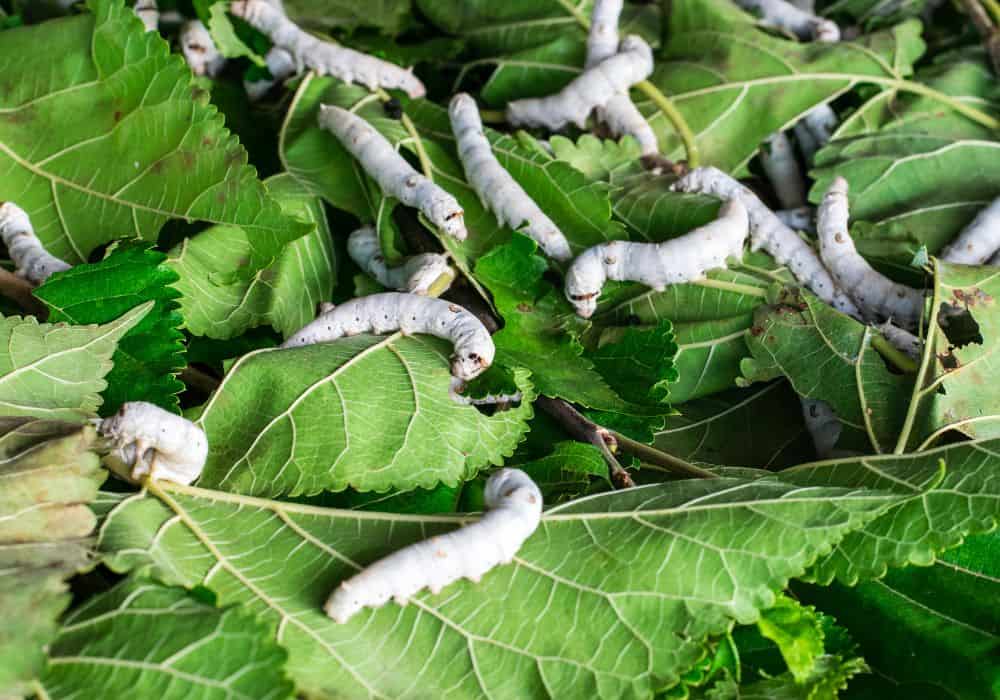 In fact, silkworms love fresh mulberry leaves so much that the species is often referred to as “mulberry silk moths” even though the moths themselves don’t eat the leaves. These trees themselves come in several sub-types, namely the red, white, and black mulberry trees. Different sub-types of silkworms prefer different types of mulberry so it’s important to know exactly what kind of silkworm you’ve got.

In the absence of mulberry leaves, you can occasionally use lettuce leaves, beetroot leaves, violet leaves, chopped carrots, or another similar food source. It is strongly recommended that you stick to mulberry leaves, however, as those offer the best and healthiest growth for silkworms. So, most experts recommend staying away from temporary substitutes such as carrots, even though hungry silkworms will eat them, as they are just not good enough.

What can I feed my silkworms, how much, and how often? 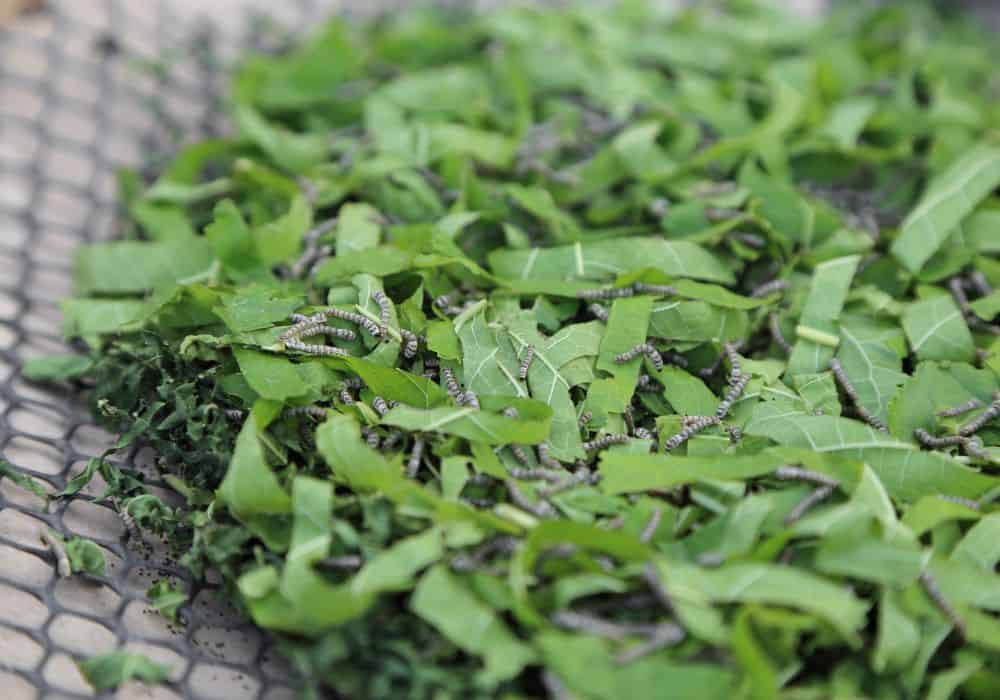 As mulberry leaves are the primary food source for silkworms, you’d do well to stock up on those even if you’re only looking after a few silkworms at a time for pet food or as a hobby. Fortunately, packs of mulberry leaves can be found fairly easily in large store chains or can be ordered online.

Do keep in mind that both quality and quantity are important, however. Soft and fresh mulberry leaves are important to make it easier for the caterpillars to feed. As for the quantity – silkworms feed and grow practically non-stop until they get into their cocoon stage so you will need a constant supply of silkworm food.

The average silkworm will eat 50,000 times its body weight in mulberry leaves through the course of its short life of 4 to 6 weeks. You should feed your silkworms 3 or 4 times a day – once in the morning, once in the late evening, and once or twice in the midday.

This is important as, if you try to give larger quantities of leaves all at once, a bit part of them will start to wilt before your silkworms have gotten to them. So, it’s wiser to give your caterpillars food in bits a few times a day and keep the rest properly sealed and in the fridge so that it remains fresh.

An exact quantity of food per silkworm per day is difficult to determine as these caterpillars grow every day, and the sub-type, environment, and quality of the food matter too. Fortunately, mulberry leaves aren’t all that expensive, so, especially if you’ve got a small number of caterpillars you grow as pets or pet food, feeding them shouldn’t be too overwhelming.

What do baby silkworms eat?

Young silkworms are still small and aren’t capable of eating hard leaves. So, for them, you should focus exclusively on young and soft mulberry leaves chopped into small pieces of ~0.5 inches (a cm) or just silkworm chow. After the first week, as the silkworms have started to grow, you can move on to larger pieces of mulberry leaves.

How to raise and breed silkworms? 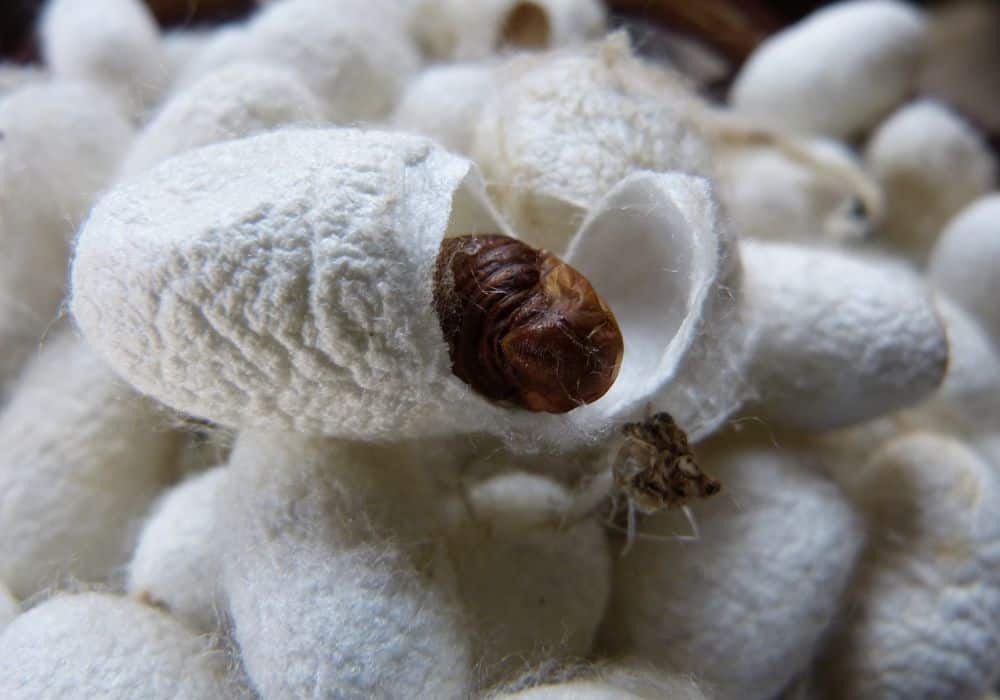 Hatching silkworm eggs and then raising them into larvae, silkworms, cocoons, and silk moths can sound complicated but it is a pretty straightforward and simple process. All you need is:

Once you’ve got everything and the eggs have started to hatch, move the newborn larvae into their main container and start feeding them daily until they are large enough either to feed to your pet or to start forming cocoons. And that’s about it!

Silkworm farming may sound complicated but it really is just a two or three-step process. You will need to maintain the right environment and feed your caterpillars the right food but that’s about it. They are harmless, cute, and easy to handle, as well as very nutritious pet food for most reptiles, birds, and amphibians. They don’t produce that much silk per cocoon so growing them commercially isn’t viable as you’d need a massive production, but this is a pretty cool hobby.