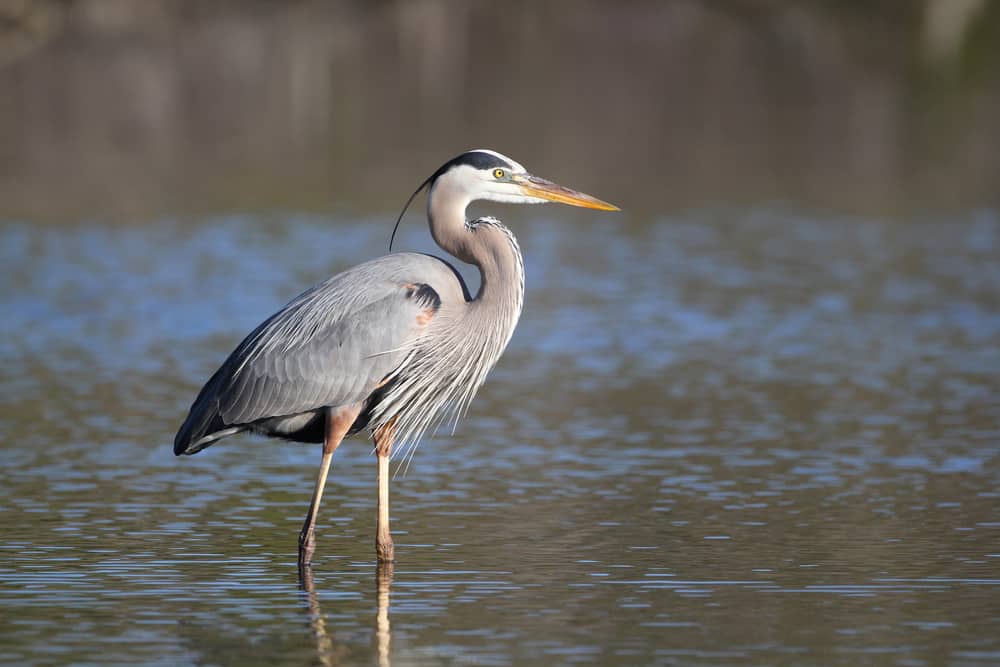 Herons are both incredibly gorgeous birds and steeped in symbolism. They are often confused with other similar bird species such as storks and cranes, however, which can make interpreting their meaning a bit more complicated. So, let’s go over the different types of herons and their different meanings and symbolism below. 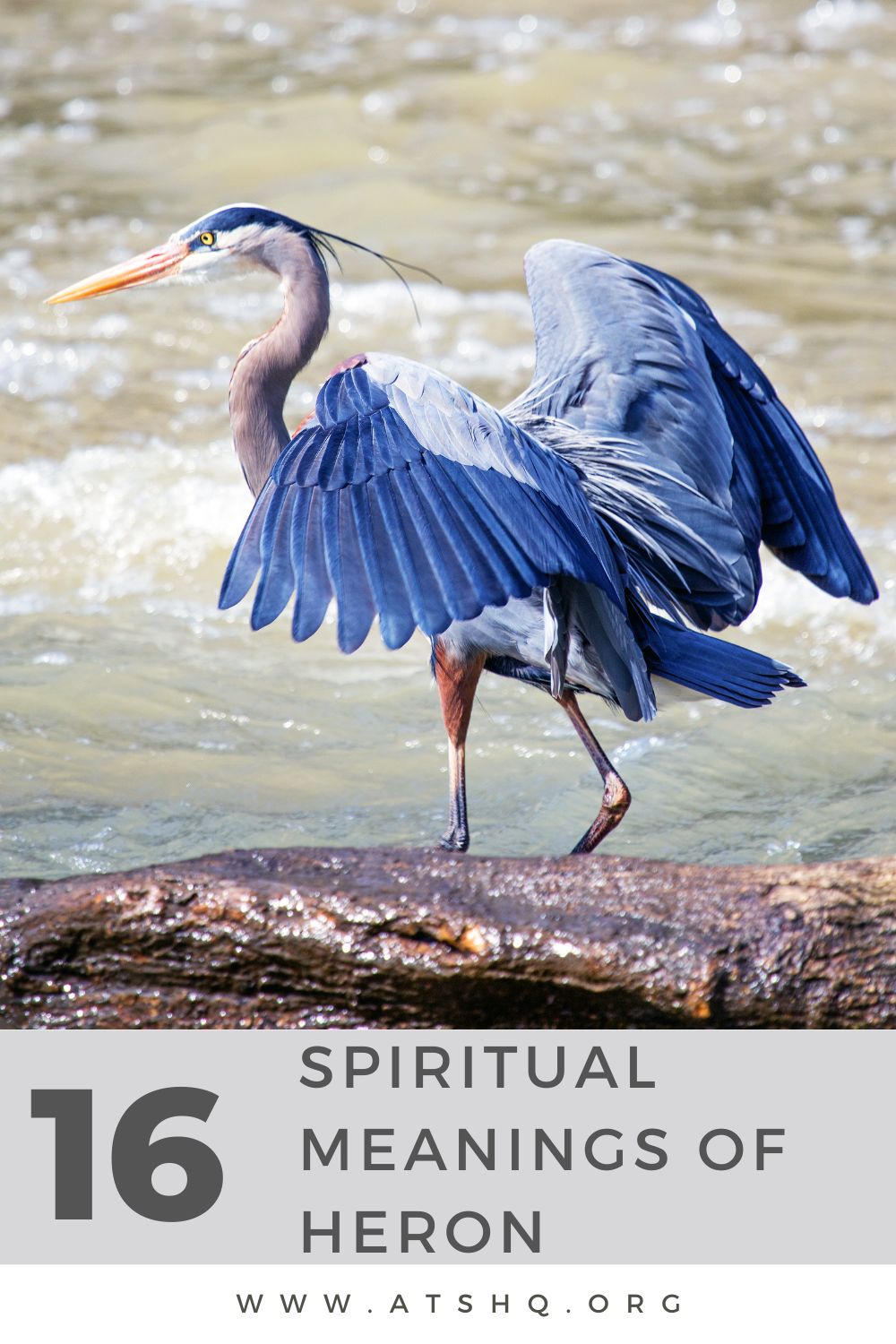 What does the heron bird symbolize?

The heron bird strikes a magnificent figure – tall and slender, with a long beak and even longer legs, as well as a very impressive wing span when it takes flight. These beautiful creatures can be found all over the world, building their nests near various bodies of water where they hunt for fish and other aquatic animals.

Because of their gorgeous bodies and especially their special hunting style, herons have become very symbolic in many cultures across the globe. The way these birds get their prey is by stepping softly through the water with their long legs, then standing very still in the right spot, and waiting patiently for their prey to get close so they can strike.

Herons also have a pretty long life and often survive for over 20 years in the world. This combination of beauty, elegance, and patience has led to the heron meaning various things such as:

Does this seem like too much? Maybe, but it’s also well-deserved as the heron easily exemplifies all these qualities and more. However, with over 60 heron species spread across the planet and several other types of birds that are often confused with them, it’s easy to get a little confused about which symbolism applies to which bird. So, let’s go over some of the most common types of herons as well as other birds such as cranes and storks. 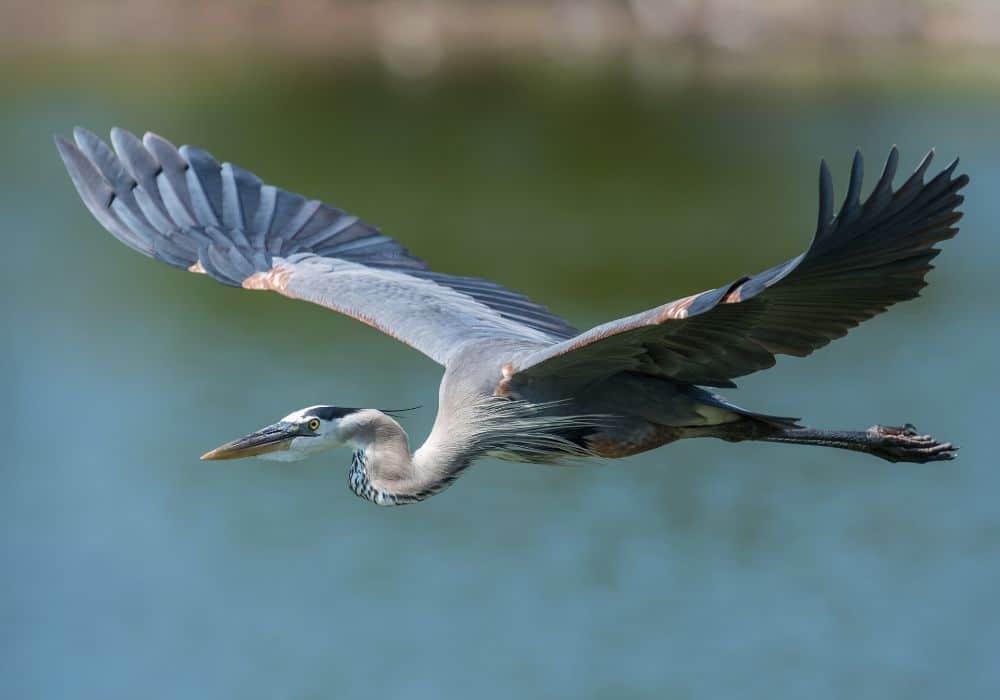 Heron vs egret bitterns vs stork vs crane – are the slight differences between them reflected in their symbolism?

It’s understandable if you occasionally mistake a heron for a crane or even a stork. These birds can look so much alike that in some languages people even have the same names cranes and herons. We’ll try to clear some of the confusion with a quick breakdown here:

Regardless of which order you put them in, herons range from medium to large size, they have long necks and legs with their necks having a distinct curve, their beaks are long but also a bit wide, they are strictly carnivorous, and they nest colonially in trees. They are also not monogamous and change mates throughout their lives, they lay 4 to 7 eggs at a time, they reach maturity at about 1 to 2 years of age, and they bring food to their chicks rather than take their chicks to food.

One of the larger heron species – although not as large as the Goliath heron – the Great blue heron is nevertheless legendary with its strong symbolism. The great blue heron symbolism is that of self-reliance and determination as well as of self-awareness and spiritual awakening. Great blue herons are fantastic spirit animals and can easily lead anyone to progress and evolve through life.

While the great blue heron is associated with self-reliance and strength, the white heron is much more associated with concepts such as elegance, grace, tranquility, and serenity. These smaller birds can often be seen calmly waddling through shallow freshwater pools, casually poking the water’s surface for aquatic prey. Gorgeous and captivating, the white heron is the type of bird you can sit and watch for hours without once looking at your watch. 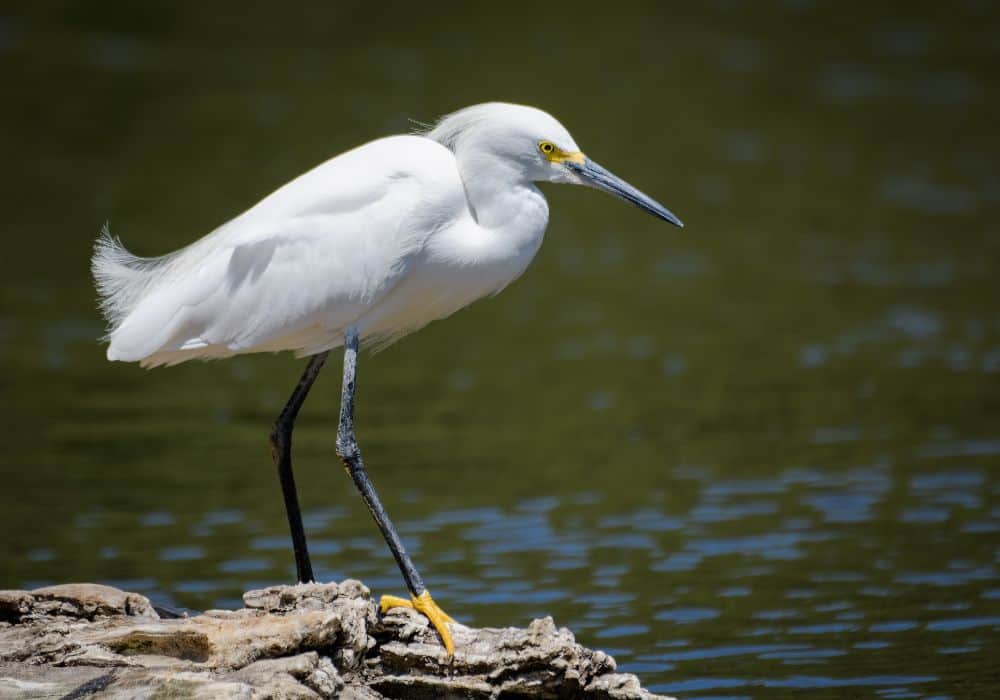 These large birds are a member of the Gruidae family of the Gruiformes order together with rails. Cranes are often confused with herons by novice bird watchers and there are indeed some similarities at first glance. However, the differences are easy to distinguish once you look a bit more.

Cranes are notably larger than herons on average with only a few of the biggest heron species reaching a crane’s size. Cranes too have long legs and necks but their necks don’t have the heron’s signature curve and are straight instead, even when flying.

Cranes are also omnivores, they nest on the ground, they are strictly monogamous, meaning that they mate for life and nest in couples instead of in large groups. They also curiously lay only 1 or 2 eggs at a time and reach maturity at a much later age – sometimes as late as 8 years. They also don’t bring food to their chicks but take them to the food instead.

For instance, storks have much larger beaks than herons and their long necks are straight and with no twist. Storks are also much more active hunters whereas herons are more the passive stalking hunter type. This naturally results in a much more different meaning and symbolism which is why herons symbolize patience, tranquility, stability, calmness, and harmony whereas storks are more well-known for their migration patterns and “bringing new life” with them.

We group these two together because they are essentially types of herons but with a different name. The Egretta genus is one of medium-sized herons while bitterns belong to the Botaurinae subfamily of the heron Ardeidae family and are extra small compared to the rest of their relatives.

This small size of both egrets and bitterns is what makes them less well-known and appreciated than “standard” herons but they are very much members of the same family. They live and hunt in the same way too but their smaller size makes them look so distinct that many people keep putting the larger herons in the same category as storks and cranes rather than with egrets and bitterns. 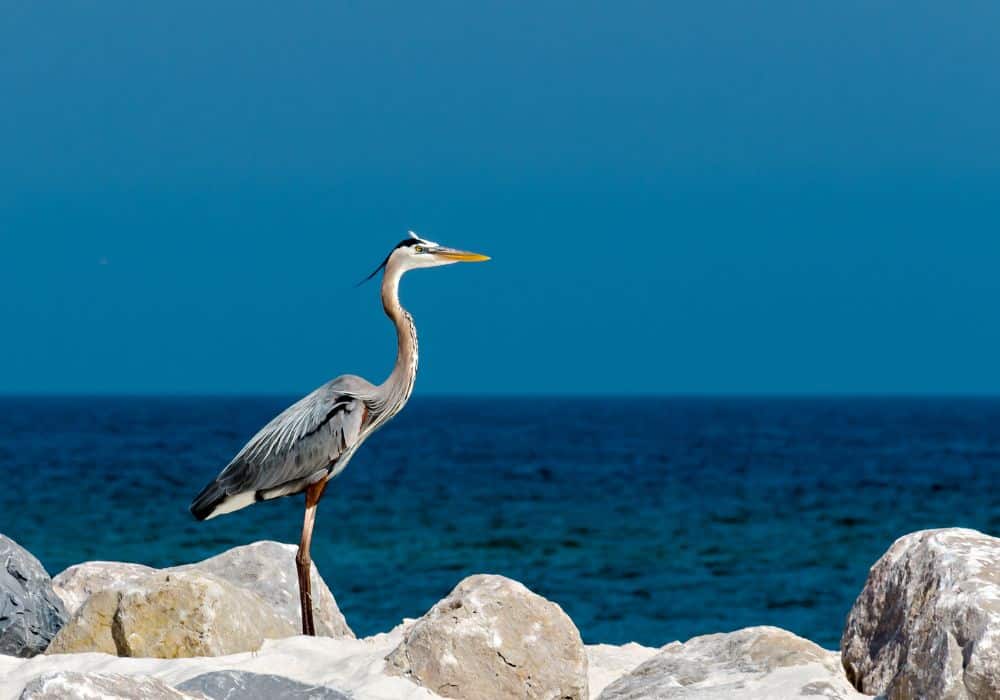 The symbolism of herons, egrets, and bitterns in different cultures

Naturally, the spiritual meaning of herons is not 100% universal even though similarities can be seen even in completely unrelated cultures. The lessons and gifts herons have to give us may vary a bit but they always lean in the same direction. More than any other bird, herons are messengers of peace, patience, tranquility, and self-reliance. But to go into a bit more specifics, let’s see how their meaning varies in different cultures.

We’ll start on a bit of a downer but, in the Bible, herons would technically be classified as “an unclean bird.” Yet, their grace still granted them plenty of favorability among early and later Christians as herons continued to be associated with the beauty of nature, tranquility, quiet, peace, and patience.

Celtic mythology is ripe with bird symbolism and that includes herons too. There, these birds dwelling on the banks of lakes and rivers are associated with the thresholds between land and water. As such, they are seen as the spirit animals of the goddess Rhiannon, the goddess of waters and lakes in Celtic lore. That’s why herons in Celtic mythology are also seen to symbolize femininity and magic.

Like many birds in Greek mythology, herons are seen as messengers of the gods. More specifically, however, they are connected to Athena, the goddess of wisdom and war. For example, in the Illiad, a heron is said to give a sign to the hero Odysseus on behalf of Athena that he is heading the right way.

This connection to Athena gives the heron a symbolism of wisdom, femininity, balance, cleverness, and success in various areas, even in war. So, it’s hardly surprising that the heron can often be seen in ancient Greek art, particularly as a symbol of the balance between good and evil.

A bird we can see very often in ancient Egyptian art and mythology is the Bennu. This type of heron or egret bird is especially connected to the several prime deities of the different ages of Egyptian mythology – first to the sun god Ra, then to Osiris, the lord of the dead, as well as to the creator god Atum and the later “composite” deity Atum-Ra.

For example, according to one of the several Egyptian creation myths, the Bennu heron was one of the few beings to exist before the creation of the world. It was that bird that helped start creation by breaking the primordial silence with its loud cry, thus connecting it to the creator Atum.

The Bennu was then associated with the sun god Ra too, with the latter well-known to travel the skies on his sun barge, transitioning between the heavens during the day and the realm of the dead during the night. In that sense, the Bennu was seen to symbolize the cycle of life and death.

This was further accented by the Bennu heron often being depicted with the headdress of Osiris, the lord of the Underworld. 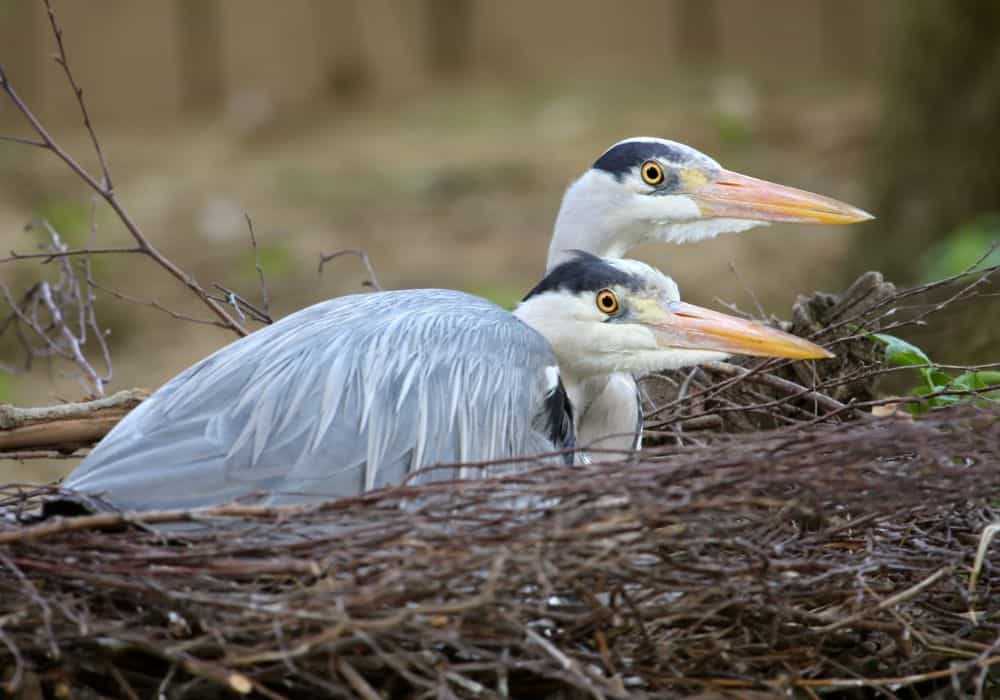 Herons, also known as Shirasagi in Japan (Shira meaning white and sagi – herons or egrets), are a very symbolic bird here as well. The Shirasagi-no Mai or “Dance with the White Egret” is an especially popular tradition, dating as far back as the 8th century AD when it started in old Japanese Buddhist temples.

Is the heron your spirit, totem, or power animal?

Herons have such strong and positive symbolism that they can work very well as either an animal totem, a spirit animal, or a power animal.

Heron spirits are great guides toward success for people who feel overwhelmed, lost, or burned out. A white hero or a blue heron spirit animal, for example, can teach you to be more patient, focused, and self-determined, to filter out all the noise and chaos in your life, and to achieve tranquility and spiritual success you were looking for.

Having a hero power animal, on the other hand, can help fill you up with a lot of positive energy and focus your mind in times of overwhelming stress and disorder. As a power animal, the heron is ideal for people who often find themselves multitasking or being saddled with other people’s work.

And then, there’s the heron totem. As an animal totem, the heron means that you are a naturally patient, self-reliant, and calm person. People with a heron totem know what they want from life, know how to get it, and live most of their lives with a calm and satisfied smile on their faces.

In conclusion – what did your heron dream mean?

Whether you want to get a heron tattoo or you just had a heron dream or vision, you can see that these birds have a lot of great symbolism that’d be welcome in most people’s lives. If you’re looking for a bit of tranquility, peace, or a helping dose of patience and good luck, the heron is the spirit animal for you.