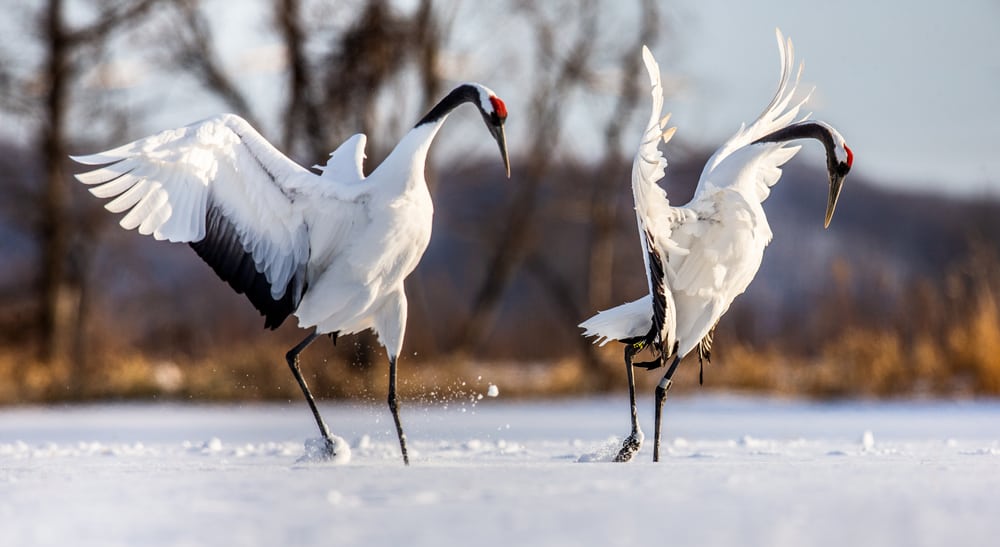 Cranes are lovely creatures that symbolize grace, devotion, beauty, longevity, and vigilance. With the majority of crane species facing potential extinction, these symbols become even stronger if you’re lucky enough to see a crane in person.

With a majestic presence that spans 5 of the 7 continents, let’s learn more about what cranes symbolize to different countries, religions, and cultures. 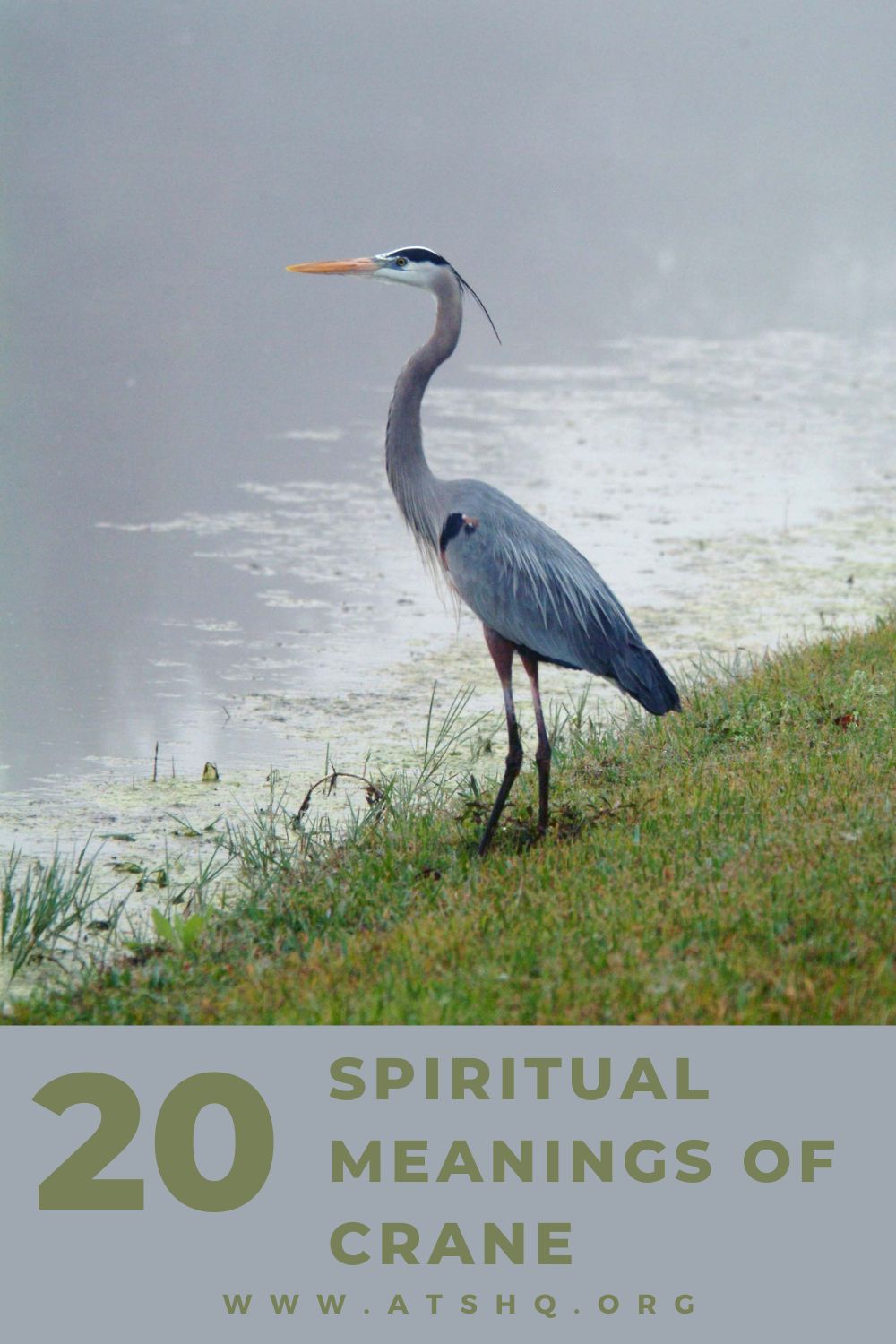 The General Symbolism of Cranes

Cranes are known for being long, heavy birds on two slender legs. The tallest bird in North America is the whopping crane, which stands at roughly 5 feet tall with a 7-foot wingspan.

These impressive creatures have unique habits and features that allow them to represent grace, beauty, devotion, longevity, and vigilance.

1. Cranes as a Symbol of Grace and Beauty

Cranes have always been seen as graceful birds because of how they move through their environment. Most cranes live in open marshlands, nesting nearby and finding food in the shallow waters.

As they walk through the marshlands, cranes take careful and quiet steps until they find a place to stop and search for food. Its long neck will remain erect and tall, looking out for predators or any danger, until it slowly lowers its head to the water to look for prey.

Cranes are mostly grey, although they can be brown or white too. Their bodies are bulky, but their height comes from their slender legs and neck. This adds an air of elegance to them as they move about on land and perform crane dances as mating rituals.

2. Cranes as a Symbol of Devotion

Cranes are usually found alone during breeding seasons. Once they find a mate, they will pair off monogamously, with many forming a long-term pair bond that lasts the birds’ lifetimes.

Even once their mate has been chosen, cranes continue to court them by dancing, calling out to them, and crooning their necks. This dedication to their partner makes the crane an excellent symbol of devotion and loyalty.

3. Cranes as a Symbol of Longevity 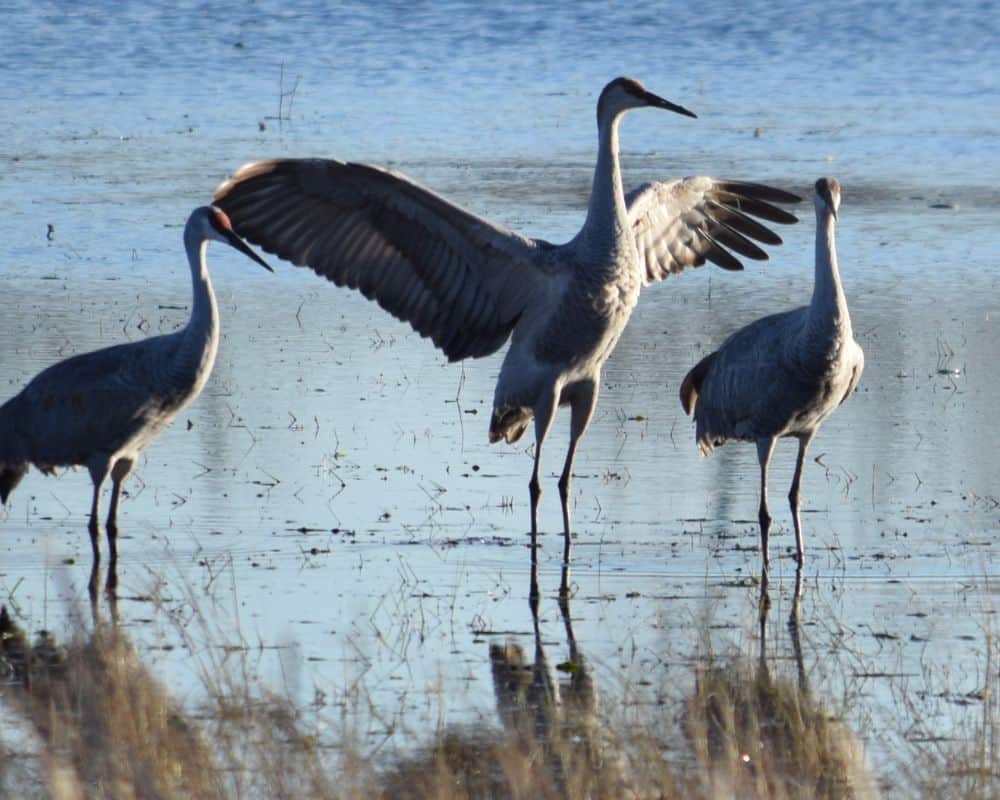 Cranes have fairly long lifespans. Most live between 20 and 30 years, but some species, such as the Siberian crane or the black-necked crane, can live until they’re 80 years old. This makes them an optimal symbol of longevity – especially in countries where the human lifespan may be lower than 80 years.

As a symbol of longevity, you can use the crane to symbolize your actual lifespan or your dedication to someone or something.

4. Cranes as a Symbol of Vigilance

Cranes tend to forage for food in shallow waters and, sometimes, on land. They use their long bill to poke in the ground and underwater, slowly searching for fish, bugs, and even plant roots.

Most humans notice cranes when they stand as still as a statue in the water, waiting for their prey to come to them. Suddenly, they’ll extend their beak and snatch up their meal in the blink of an eye.

The image of a standing or perched crane has long been associated with the idea of vigilance and being aware of your surroundings. It can also symbolize vigilance in the form of keeping at a task until you reach your goal.

The Cultural Symbolism of Cranes 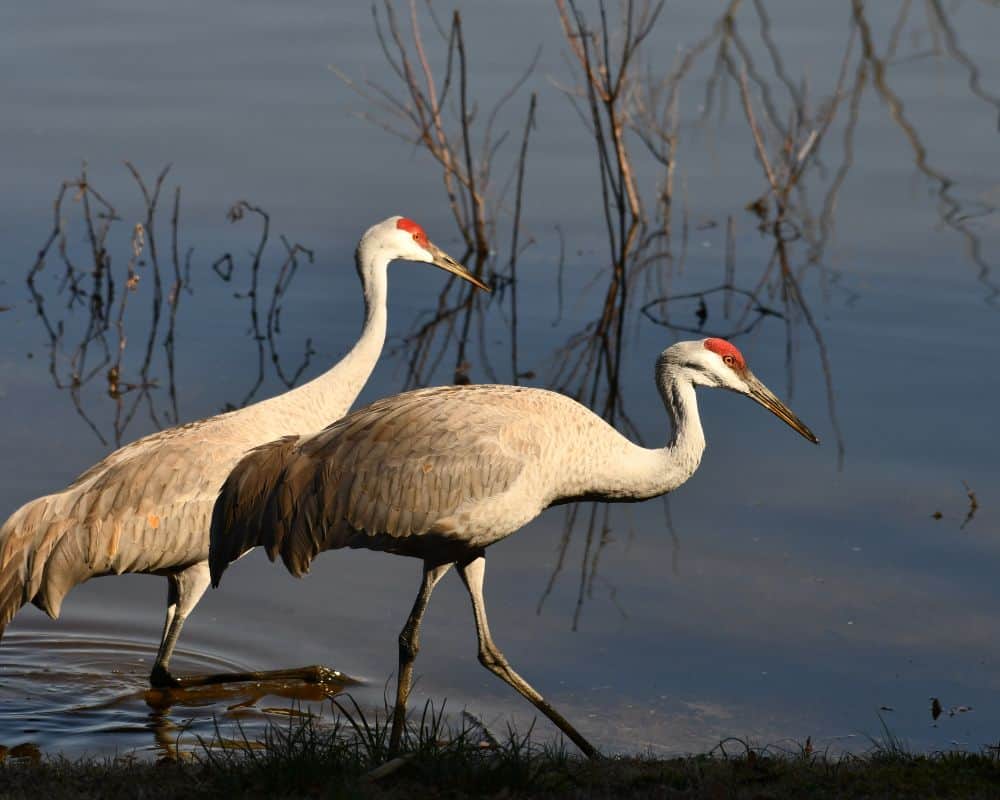 There are fifteen species of cranes spanning the globe. With each species sporting unique features and appearances, the cultural symbolism of cranes changes across countries.

Aboriginal Australians associated cranes with the sun’s variations over the four seasons. Because cranes are protective of their territory and young, they also represent fertility and watching over one’s home.

Cranes were positive symbols for most Native American cultures, some of which included crane clans.

One native clan used to be called Tightwees, meaning the “Cry of the Crane.” Others, like the Chippewa tribe, used the black crane as a symbol on their flag to represent leadership.

Many tribes also worshipped cranes, looking to them as symbols of independence, fortune, immortality, and wisdom.

Cranes can emit very loud bugle calls that can be heard over two miles away. They can also honk, snore, and hiss. This wide range of sounds makes them an oratory symbol for Native American tribes.

The Navajos have also named Ziltahjini Peak, a mountain in Arizona that measures over 2,000 meters, after standing cranes, showing how they represent height. Atoko Point in the Grand Canyon is also thought to have been named by the Hopi tribe after cranes, as well as Watula Creek in Alabama.

Cranes have different representations across Asia. In China, the crane represents the spirit of one of the masters of the Yuan Dynasty, Huang-Kung Wang. Cranes in China are also representative of dance, music, and the perfect pitch of voice.

Japan uses the Manchurian Crane together with a turtle to represent long life. In this image, the crane itself represents 1,000 years.

Those in Korea associate Red-crowned Cranes with purity, longevity, and peace. These cranes symbolize Incheon city and are represented on the 500 won coin. An ancient group of scholastic Koreans called the Seonbi also saw the cranes as symbols of constancy.

The name for cranes in India comes from the phrase “bird of the lake.” In this country, cranes are honored and symbolize loyalty in marriage, unconditional love, and good luck. Crane pairs in India are seen as soulmates.

Cranes are highly regarded in both African countries and within certain tribes. The national bird of South Africa is the blue crane, while Zulu chiefs use crane feathers to symbolize honor.

One famous African legend says that an African king got lost and almost died from dehydration. A group of cranes helped him, so he returned the favor by using a magician to give the crane their feathered crowns. This may specifically be referring to Black Crowned Cranes, which have ornate gold-colored feathers resembling crowns protruding from their heads.

The Symbolism of Cranes in Religion 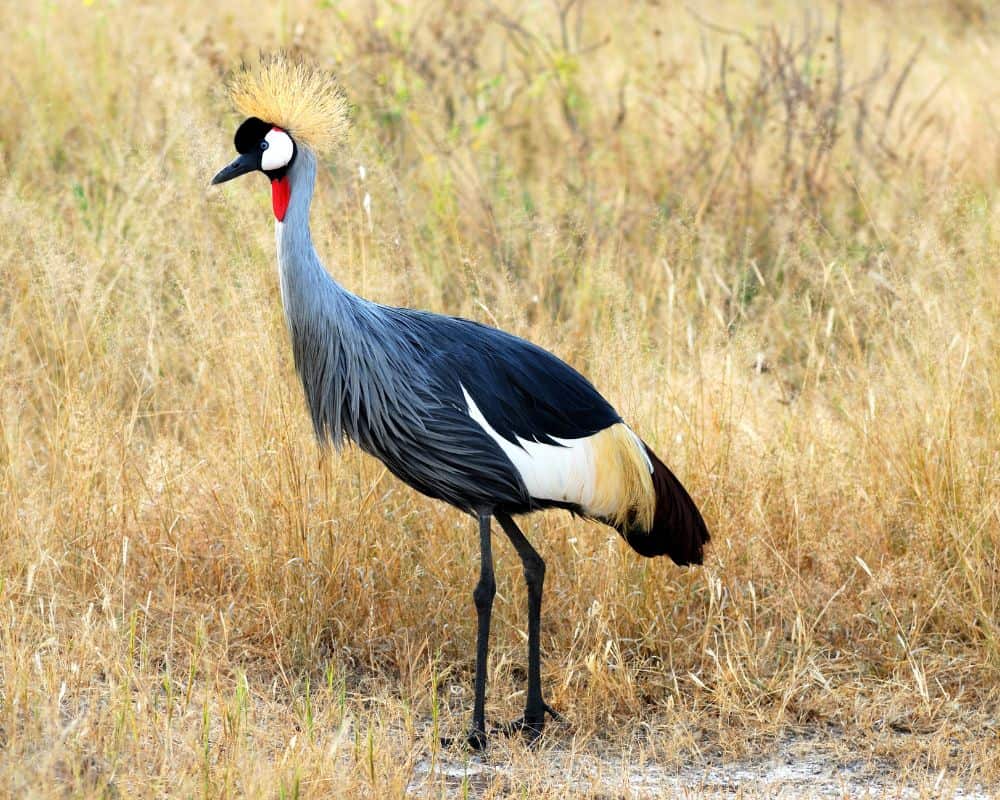 Cranes are animals that are mentioned more than once within many of the world’s biggest religions.

Cranes are mentioned in the Bible in Isaiah 38 and Jeremiah 8. They are mentioned for their unique voice and their migration patterns. Since cranes fly in V-shaped patterns that protect the young, weak, and elderly, they can represent how Christians must look out for others, especially the poor and the sick as mentioned throughout the Bible.

In Israel, the crane is the tallest bird. Cranes in Hebrew and Aramaic are called kurkeyah. Most people believe this name derived from the crane’s cry – yet another ode to their voice. The mention of the Crane in the book of Isaiah in the Torah is when Judah cries out like a crane during his illness, so its voice is displayed as high-pitched and piercing.

In Buddhism, many animals symbolize rebirth and renewal, and cranes are no different. Buddhists see cranes as enlightened souls who have returned to earth to help others reach the same level of enlightenment.

The presence of cranes can also represent faithfulness and commitment for Buddhists.

Many Muslims believe cranes to be a physical representation of the phoenix. They are also considered to represent three goddesses who are thought to be Allah’s daughters: Uzza, Manat, and Allat. These three are called “exalted cranes” who cultivate immortality and spiritual transformation.

Hindus are one of the few religions that see cranes in a negative light.

In Sanskrit, cranes are called the saras birds. Hindus see this animal as the most deceitful bird of all, and the goddess called Destroyer or Deceiver even has a crane’s head.

The Symbolism of Cranes in Folklore & Mythology 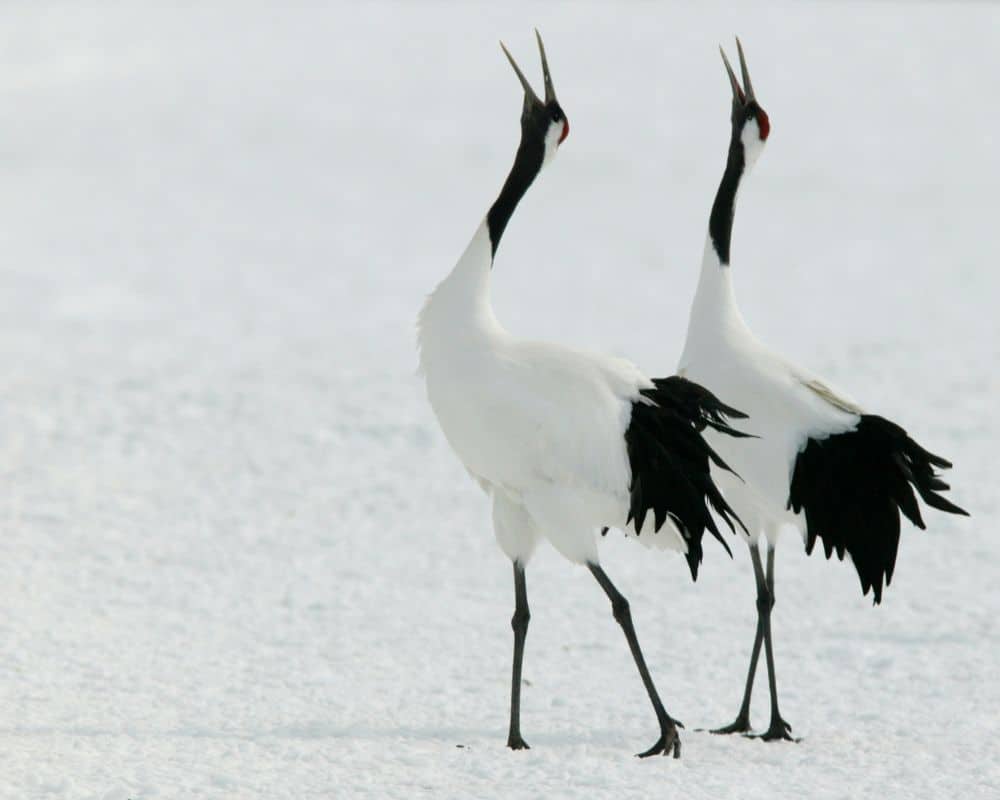 Folklore and mythology include the sayings, legends, oral stories, and beliefs of different groups of people. Cranes can be found in everything from Greek mythology to Chinese folklore, so let’s explore their symbolism in this context.

One Greek myth talks about Gerana, the queen of a tribe of Pygmies. Gerana said that she was more attractive than Hera, a Greek goddess. As punishment for this comment, Gerana was turned into a crane. In this situation, cranes can take on a negative representation of vanity.

Another version of this same legend says that the Pygmies and cranes fought over many years because cranes chased the Pygmies out of their homes.

Within Greek mythology, Cranes may also be associated with the sun god, Apollo.

Some Chinese traditions represent cranes as the carriers of souls into the heavens. One Chinese myth says that cranes are transformed pine trees, as both live for many years.

Another legend says that Confucius’ disciple, Tseng Ts-ang, saved a crane’s life. As a thank you, the crane returned with its mate carrying pearls. Here cranes can represent paying it forward or good karma.

Aesop was a storytelling slave from ancient Greece. Aesop’s Fables, called the Aesopica, includes a tale called “The Geese and the Cranes.”

In the story, a bird catcher came to catch the geese and cranes, but only the cranes were able to escape because they were lighter animals. The moral of the story is that those who are caught are not always the guiltiest. Here, cranes can represent the unfairness of the justice system – even in the present day.

The Spiritual Symbolism of Cranes 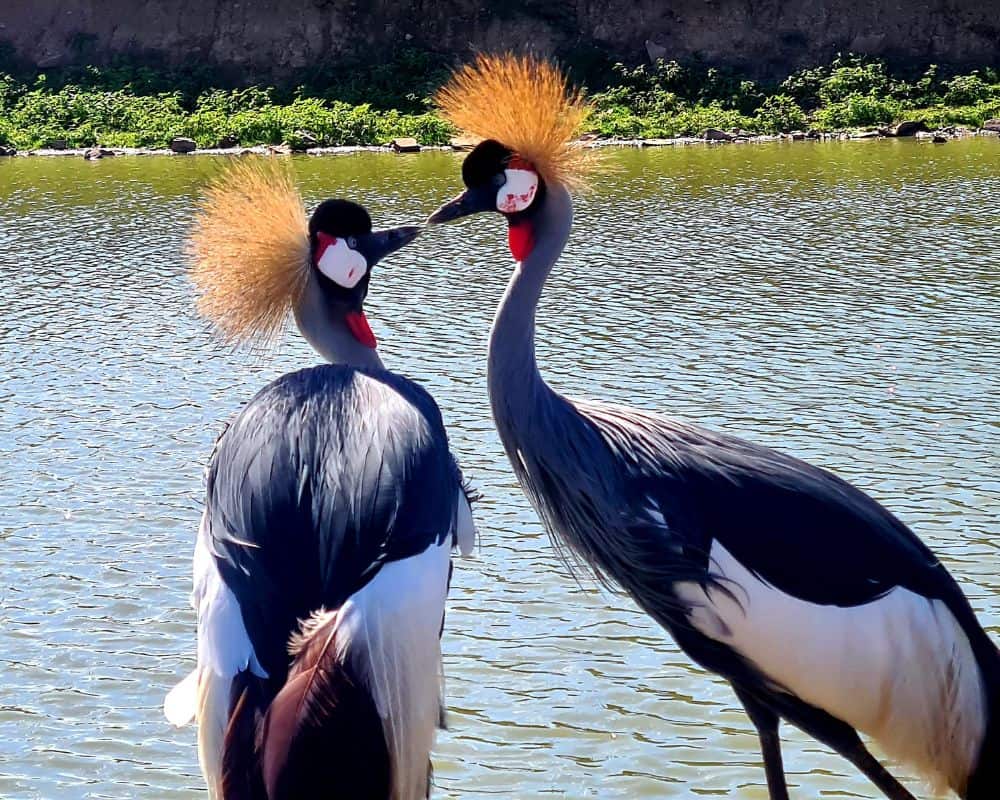 Totem animals can be objects, plants, or animals that serve as an emblem of a family, group, or clan.

The crane totem animal is said to connect families, tribes, or groups to their spiritual consciousness. This helps the group reach their highest peak of wisdom, allowing them to truly experience, celebrate, and enjoy moments of love and happiness in their lives.

Spirit animals encompass a spirit that helps guide a person on their journey.

The crane spirit animal can share virtues with those who approach life’s challenges and experiences with confidence and patience. Much like the beauty of the crane and its delicate movements while searching for food, this spirit animal takes life one stride at a time with precision and focus.

As a group, cranes flock together and are very social creatures. Most species form large groups for both protection and socialization. If the crane is your power animal, it can symbolize a strong connection between you and your loved ones.

Although they are social, cranes are also migratory birds that leave the group and an area when the time comes. As your power animal, this could be a sign that you need to move on to a new chapter of your life.

Different depictions of cranes symbolize different things, especially in a crane tattoo. Here are some of the most popular crane tattoos and what they represent.

With a long withstanding representation of longevity, grace, good fortune, and devotion, cranes have grown to represent many positive virtues over time. From the lands of Native Americans to Asian countries, the symbolism of cranes has been primarily positive.

These elegant, large birds could be the spirit animals of those who face life’s challenges with confidence and patience. All in all, it is a magnificent creature that can be inspirational across cultures. Does the crane represent any virtues that resonate with you?