Dragonflies are impressive creatures with a peculiar design. Whether they’re flightless as immature nymphs or fluttering across the water’s surface as adults, they have a lot to teach us.

Dragonflies symbolize maturity, growth, looking for deeper meanings, and living in the moment. They have other representations depending on the culture, religion, and folklore you are exploring. Let’s have a look at each of these and learn more about the skillful dragonfly and all it stands for. 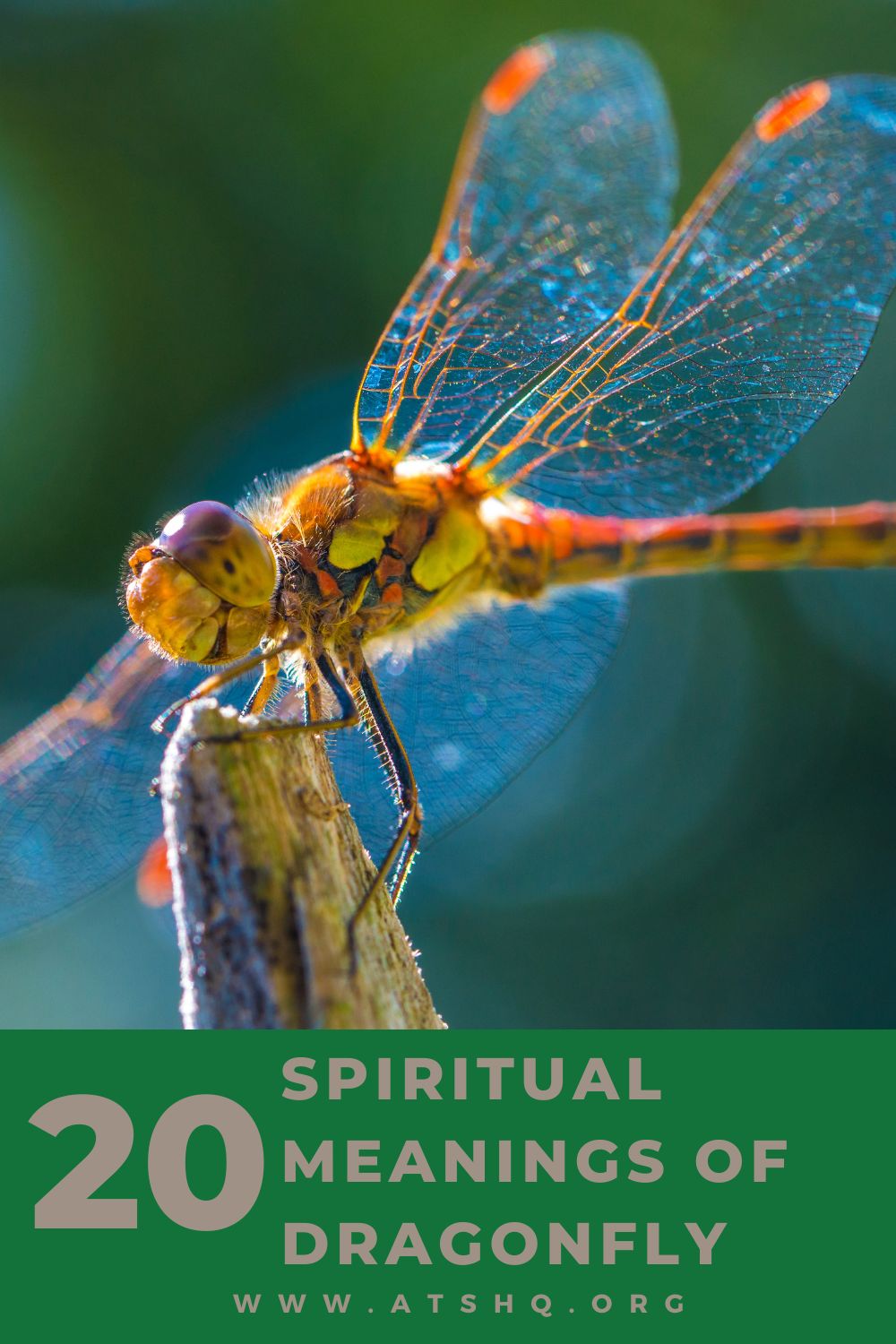 1. The General Symbolism of Dragonflies

Dragonflies have been around for over 300 million years, and humans have changed their views on them over time. Standing out for their appearance, modern-day dragonflies are seen as symbols of maturity and growth, deeper meaning, and living in the present moment.

1. As Symbols of Maturity & Growth

The life cycle of most dragonflies is very unique because the majority of its life is spent as a larva. The beautiful, colored, flying dragonflies you’re used to seeing are adults that are normally only alive for a week or two.

Larvae, on the other hand, develop straight from the egg and grow underwater for about one to two years.

The fastest larval development is found in Emerald Damselflies over two to three months, but the longest development of Golden-ringed Dragonflies lasts five years! Once they reach adulthood, dragonflies quickly find mates before dying off some days later.

The growth and development the dragonfly lives through are impressive. It focuses great time and energy to molt over ten times until it reaches the right form for metamorphosis. This is why dragonflies are excellent symbols of continuous growth to reach the epitome of one’s maturity and create your sense of identity.

2. As Symbols of Deeper Meaning

With the multifaceted levels of a dragonfly’s life comes a search for deeper meaning. These tiny creatures begin most of their lives underwater, submerged and searching for sustenance before they can even breathe air.

Once out in the open, they are often seen flying across or even standing on water with grace, representing searching for more meaning in life. Their iridescent color gives them different appearances that depend on the angle of light, almost creating illusions. This also shows how meaning in a situation can change depending on your perspective, just like iridescence.

3. As Symbols of Living in the Moment

We often hear the phrase “Live in the moment,” but rarely do we interpret its meaning. Living in the moment means being present in where you are, who you’re with, and what you’re doing. You’re not focused on the past or the future, but solely on the present.

Dragonflies encompass these ideas through their short lifespan as adults. They spend a great deal growing and preparing for flight only to have a few short weeks to enjoy it. This is reflected in a lot of human lives across the globe, as we work for decades hoping to enjoy only a short retirement that may or may not come.

Instead, use the dragonfly to highlight the importance of living and enjoying every moment – from the ones that are uncomfortable to the ones that have you sitting back and relaxing.

2. The Cultural Symbolism of Dragonflies 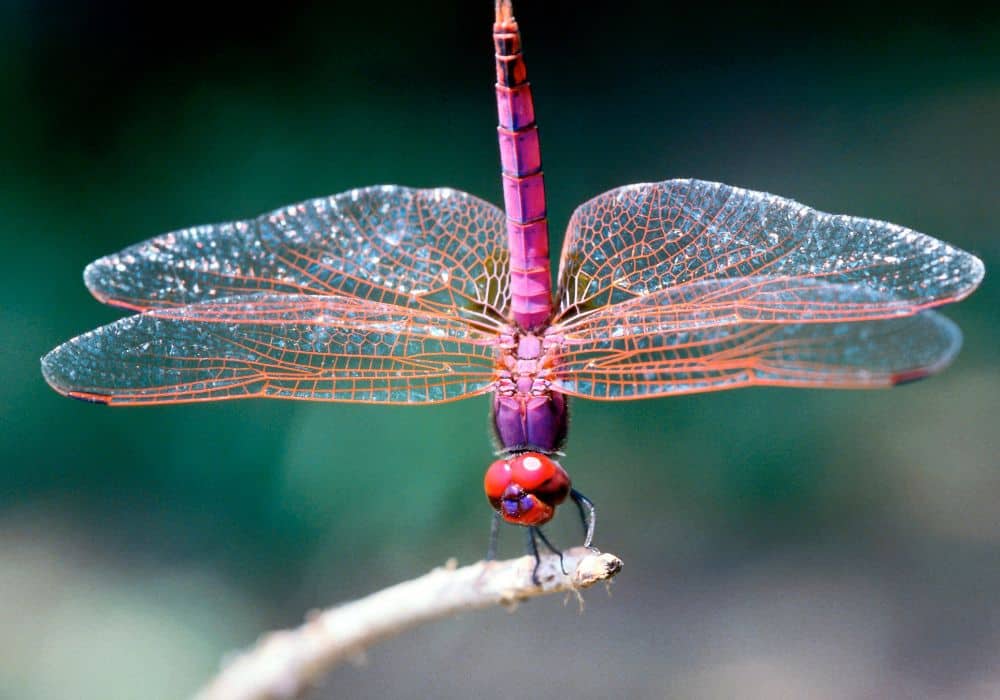 With every culture comes a different understanding of the dragonfly and what it represents.

The dragonfly is an important symbol in Native American culture and differs from tribe to tribe. In the Pueblo and Hopi tribes, a dragonfly symbolizes transformation and healing. Its spirit is often called upon by tribe healers since it’s considered a medicinal animal.

In the Pueblo tribes, killing a dragonfly is completely taboo.

For the Navajos, the dragonfly image is depicted in sacred sand paintings to represent water. It also stands for purity and happiness.

The Plains Indians painted dragonflies on tepee covers and war shirts to ward off harm. For them, the dragonfly is a symbol of protection and invincibility.

The Danish and Portuguese are afraid of the dragonfly, as it is a symbol of darkness from another realm.

They also refer to dragonflies as the “devil’s needle” and “eye poker.” Some say this is because the dragonfly is colorful and bright, but once it dies, it turns transparent and colorless much like it was before maturation.

In Vietnam, people use dragonflies as a weather guide. They believe if they fly low, the rain will come and if they fly high, the weather will be bright and sunny. A mid-level flight would predict an overcast day.

The dragonfly symbol is very significant in Japanese culture and is even featured in their haikus. For the Japanese people, the appearance of dragonflies means summer is coming to an end and winter is on its way.

In China, there are many myths about the dragonfly. One is that this creature came from dragons and embodies the soul of the dragon – a thought shared by certain Native American tribes as well. To the Chinese, the dragonfly symbolizes prosperity and new beginnings as well as change, strength, peace, and harmony.

The Celts were a collection of European clans grouped by their language and culture. There are over 23 different names for the dragonfly in the Celtic language, as these insects were mentioned many times in poems, tales, and myths.

The Celts spoke about dragonflies as if they were magical. The way a dragonfly can fly and change direction on a whim attests to its “magic.”

The Ancient Egyptians used dragonflies as the focal point of art, depicting many papyrus swampland scenes. For them, hunting in these wetlands was a favorite pastime and they thought this scene was the best way to experience the beauty of life.

Ancient Egyptians also featured the dragonfly symbol on clothes, shields, and personal adornments. Dragonflies were considered good luck due to their darting speed, and this symbol sent well wishes to soldiers going off to fight wars.

3. The Symbolism of Dragonflies in Religion 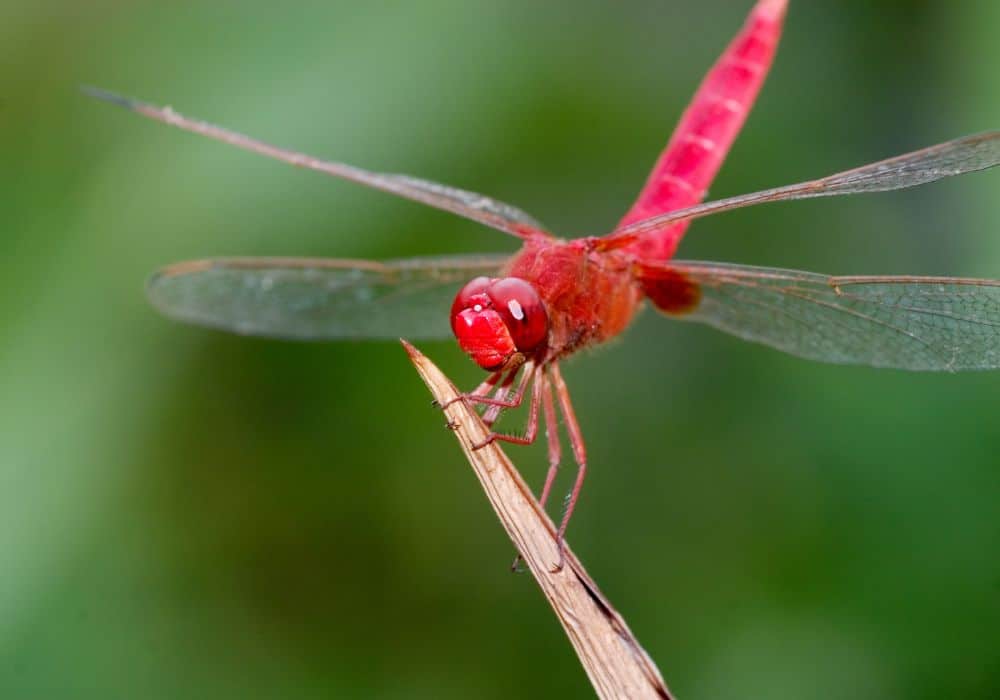 Dragonflies are not mentioned in the world’s major religions as much as other animals, but we can still find prophetic mentions and connections to Christianity and Paganism.

As larvae, dragonflies lack their vibrant adult colors. Once they emerge from the water for their final molt and metamorphosis, they become adults that almost seem transparent. After spending sufficient time in the sunlight, they become the bright-colored adult dragonflies with wings that we know and love.

While they aren’t mentioned directly in the Bible, dragonflies are often connected to Christian beliefs about God and God’s light. It is said that when you become a Christian, you are transformed from your past self through the light of the Lord, much like a dragonfly needs the light to transform into its best self.

Some scripture about the light of the world and its goodness can be found in Mathew, Psalm, and John.

Paganists include Wiccans and other nature-oriented religions. For Wiccans, dragonflies symbolize transformation, change, and adaptability. Some Wiccans also believe that seeing a dragonfly near water means you should explore your current feelings at a deeper level.

4. The Symbolism of Dragonflies in Folklore 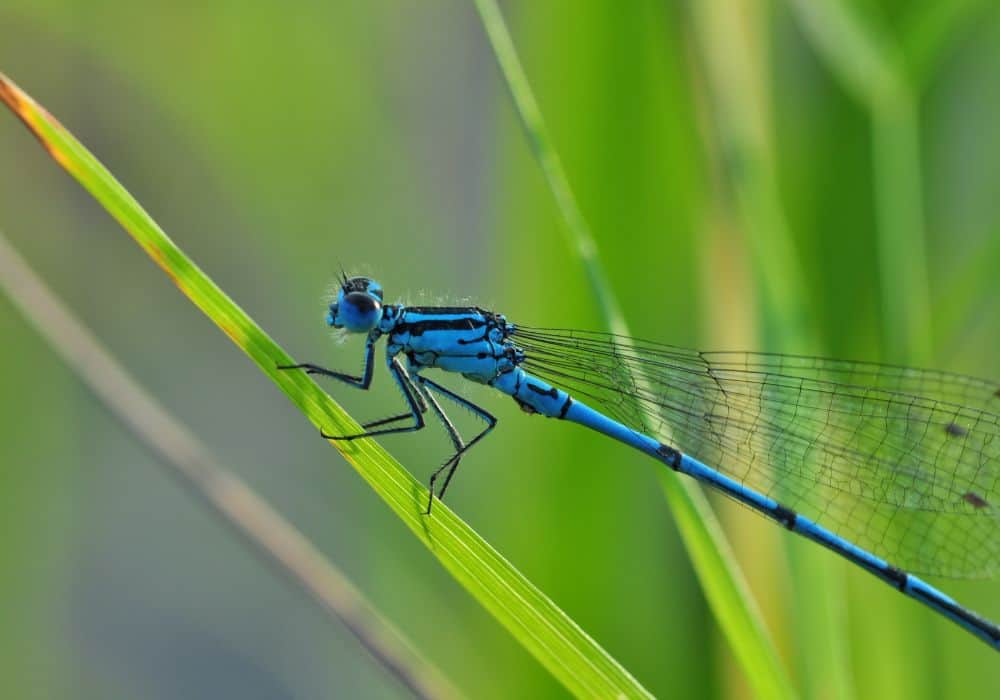 Folklore can include myths, legends, tales, customs, and oral stories passed through a community over time. Interestingly enough, much of the folklore around dragonflies symbolize darkness or negative feelings, especially those from Sweden, Germany, and Romania.

In Sweden, dragonflies have a darker connotation. People believe if a dragonfly flies up to someone it’s to check the purity of their soul. This is because they believe dragonflies resemble weighing scales, and the devil uses this creature as a messenger to weigh souls. It is said that if a dragonfly flies around your head, your soul is heavy and injury is foreseen in your future.

In some regions of Sweden, folklore states that dragonflies will follow children who tell lies and adults who scold and curse. Once they are caught, the dragonfly will punish them by stitching up their eyes, followed by their mouth and ears.

In Welsh lore, it is believed that fairies would ride dragonflies like horses so they could travel in the blink of an eye. Others say the dragonfly is a fairy in disguise and has to be seen at the exact right angle to notice the ruse.

The Welsh also believed the dragonfly has true sight, which is an ancient and powerful ability to always see the truth. In this myth, the dragonfly is a lucky spirit who can restore health and, if you see one, it means change is coming. Spotting a dragonfly can also be a reminder that you can’t fully see a situation or person in your life and should therefore tread lightly and seek the truth.

In Sweden, dragonfly symbolism takes another dark turn. They’re associated with ghouls and goblins, meaning they represent an impending tragedy. The legend says that dragonflies appear to find bad souls to return to the forest.

In Germany, the legend says that a cruel princess refused to talk with a man and ran him over with her carriage instead. The man cursed her, forever joining her with her horse and forming the dragonfly.

In this country, dragonflies symbolize evil, curses, and bad omens.

Romanians also see dragonflies as symbols of dark magic. In one legend, the devil tried to convince a fisherman to help him cross a river. The fisherman denied the devil, so the devil turned himself into a dragonfly.

5. The Spiritual Symbolism of Dragonflies 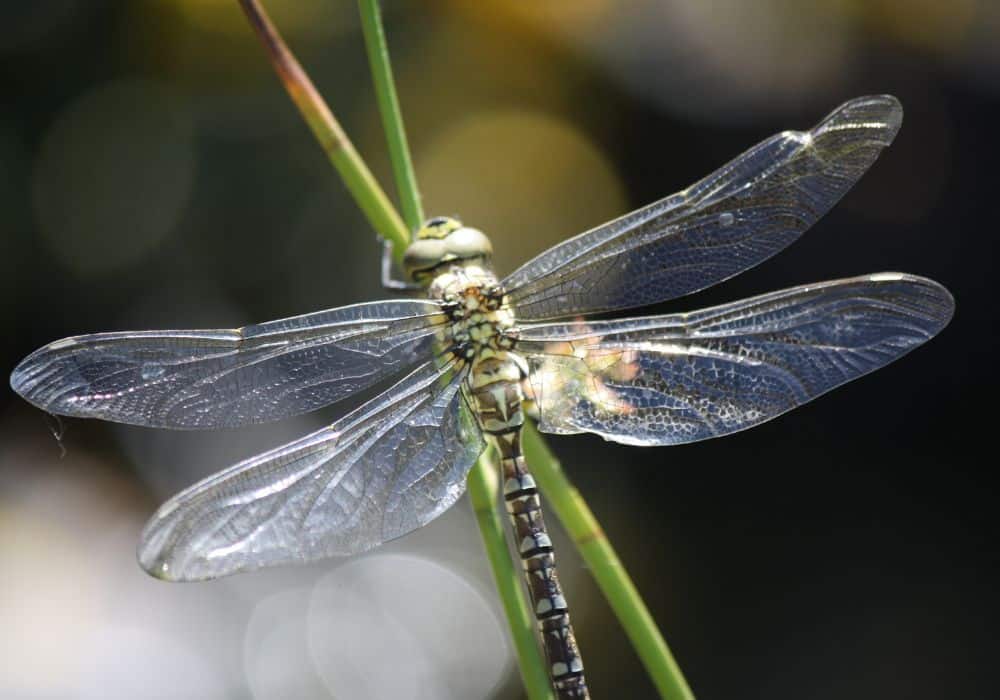 The spiritual meaning of dragonflies has changed over the centuries. You can find different meanings for them in dreams, as omens, and as totem, spirit, and power animals. Many individuals also consider their spiritual meanings when getting a dragonfly tattoo.

Dream interpretation can vary greatly depending on your life circumstances; however, here are some general meanings you can consider when experiencing a dragonfly in your dreams.

If you’re a fisherman, look out for dragonflies while on the water to signal plentiful fishing spots and good luck.

Some also say seeing a dragonfly is a good omen, meaning the insect is supportive of the decisions you’re currently making in life.

Killing a dragonfly, on the other hand, is sure to bring bad luck and even death into your life.

Totems are natural animals believed by society to have spiritual significance. Some groups adopt a totem animal to symbolize the participants as a whole.

The dragonfly totem animal signals transformation and wisdom. It signals that you and your group work towards manifesting your goals with courage even though the process may be difficult.

If you feel that you have a dragonfly spirit animal, you may be connected to the idea of change and light in your life. This dragonfly spirit guide could push you to seek out light, whether that be in a spiritual way, through education, or by following your dreams so that you can grow as a person.

To do this in the best way, dive deeper into feelings of adaptability, joy, passion, and acceptance on your way to further stability.

The dragonfly power animal can be very strong, as Chinese and Native American tales say they came from dragons themselves. Those who find the dragonfly to be their power animal appreciate time outdoors, experience intense emotions, and thrive in an abundance of sun.

Dragonflies have been seen as unique, otherworldly creatures for centuries. Since the majority of their life is spent underwater as larvae, their short-lived adulthood represents transformation, maturity, and growth. They are also seen as symbols of living in the moment and of finding deeper meaning in life.

With deep-rooted significance in different cultures around the world, everyone can find a unique dragonfly meaning that resonates with them.