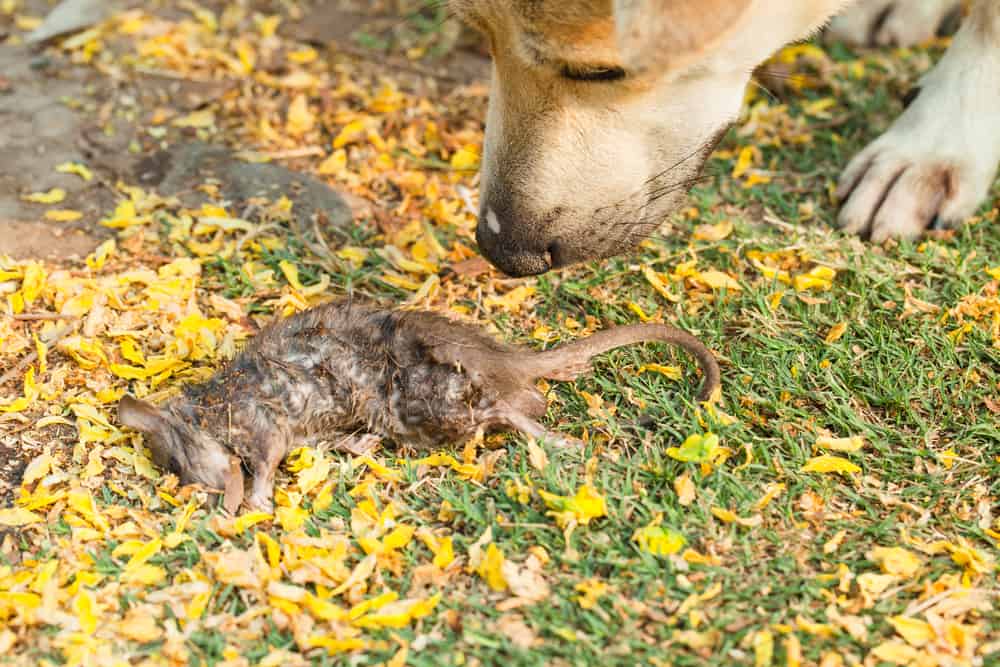 It is absolutely humanly to freeze and be overwhelmed with what to do next when you realize that your beloved doggo has eaten the rat poison. To your rescue, we’ll discuss all the necessary details you need to know about rat poisoning in dogs.

If you are a pet parent and are deciding to use rat poison baits to kill and scare off the rodents away, you must educate yourself on the dos and don’ts and all the necessary steps you should take in case of poisoning emergencies in dogs.

So, what to do if your dog eats rat poison? Read on to find out!

Are Dogs Attracted to Rat Poison?

A veterinary clinician at the University of Adelaide, Dr. Peter Hutchison, says that dogs are also attracted to rodenticides, just like rodents.

Dogs have heightened olfactory senses, and rat poison is designed to attract its baits with the smell. Once your pet finds the bait, they’ll probably eat the poison out of curiosity, even if they aren’t as attracted to the scent. Therefore, using rat poison in a household with pet dogs or cats is a bad idea.

Even if these pets don’t find the hidden rat bait, they might attack the weak poisoned rats and mice. Such hunts can also lead to rat poisoning in dogs.

What To Do If a Dog Eats Rat Poison? 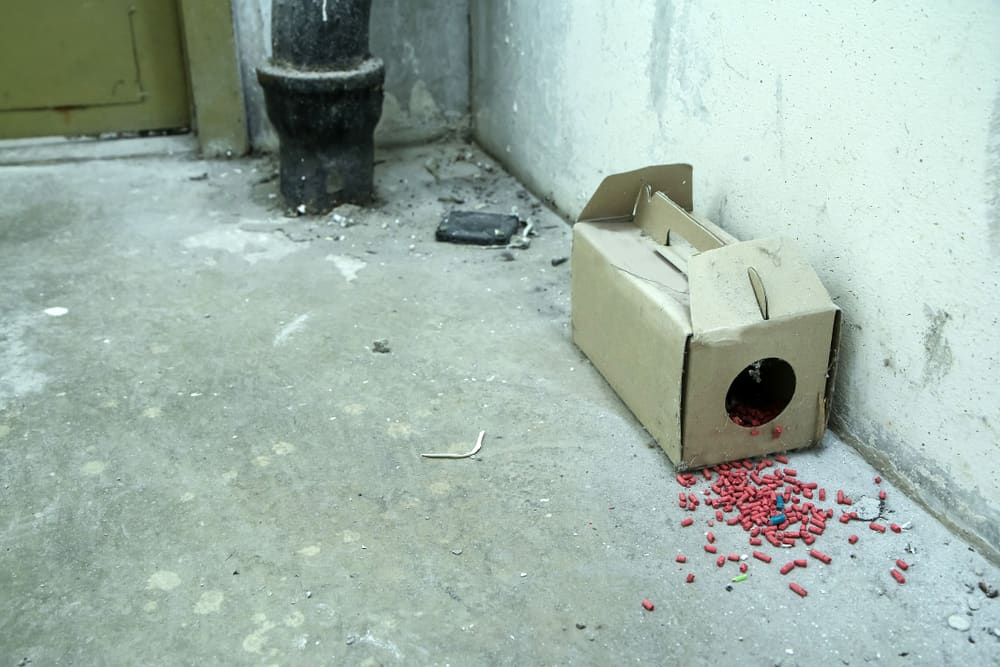 While only LAACS have a prescription antidote, there are several treatment options to recover your dog from rat poisoning. Below are a few things you can do from your side:

However, absolutely refrain from doing this on your own unless you’re advised to do so. If the poison was metal-phosphide-based, vomiting can release highly toxic phosphine gas. In such cases inducing vomiting can further impose health risks on the nearby member.

What Does a Rat Poison Do to your Dog?

The effects of rat poison on your dog depend upon the type of poison they ingested. Below are the four most types of poisonous active ingredients used as rat baits.

LAACS work by ceasing blood coagulation. After the ingestion, these toxins hinder the body’s ability to produce vitamin-K dependent clotting factors which leads to internal bleeding in the victim’s body, finally killing the pet in a few days to a week span.

These are the most common type of rat baits. Diphacinone, Warfarin, and Bromadiolone are a few types of active ingredients used in LAACS. The toxicity level of LAACS varies with the type of LAACS and the amount of dose ingested.

Cholecalciferol-based rodenticides result in a high calcium and phosphorous concentration level in the body. Such a high level of these elements in the body eventually leads to severe kidney failure and eventually death if untreated.

Bromethalin disrupts oxidative phosphorylation in brain cell mitochondria in the Central Nervous System (CNS), i.e., it halts aerobic metabolism in the brain. This makes it impossible for the brain to produce energy.

Moreover, low energy inhibits the function of Na/K ATPase, resulting in the loss of osmotic control. Water influx to the cells increases, which causes the brain cells to swell. Eventually, the victim dies of cerebral or spinal cord edema.

This highly potent rodenticide doesn’t take as long as LAACS to kill the animal. So, be quick to diagnose the poisoning and take your beloved doggo to a vet.

While this type of rat poison is not as common, it can be very toxic to both pets as well as the pet owner. This poison works by releasing Phosphine (PH3) gas into the stomach. The food interaction might, unfortunately, aid the process.

In case of vomiting, all the windows are doors should be left open, and proper air circulation should be facilitated. The Phosphine gas can be toxic to the inhaler, even in small doses.

Symptoms of Rat Poisoning in Dogs

LAACS poisoning is accompanied by signs of internal bleeding. The symptoms might appear a bit late, around 3-5 days after the poisoning. So, in case of even the slightest doubt, take your dog to a vet as soon as possible.

Cholecalciferol or Vitamin D3 poison also takes a few days to kill its target. In about 2-3 days from ingestion, the victim will develop acute kidney failure. Below are a few signs your dog might show during the poisoning:

Bromethalin works quickly and typically kills the victim in 1-2 days after ingestion. The more the dose is ingested, the faster the symptoms show and the quicker the animal dies. The following signs in your pet indicate bromethalin poisoning.

These phosphide poisons work relatively much quicker than other rodenticides. In around 15 minutes to 4 hours, the symptoms are evident, which gradually worsens, killing the victim if immediate medical attention is not provided.

How to Diagnose Rat Poisoning in Dogs?

To start with, the onset of the symptoms, as mentioned above, is the primary way to diagnose rat poisoning in your dogs. But that being said, sometimes symptoms might show when it’s already too late to do anything.

Therefore, if you’re a pet owner and you use rodenticides around your house, you should be aware of multiple facts.

So, even if the poison bottle seems intact, but your pet is showing the above-mentioned signs, it’s time to rush your pet to a hospital.

Can a Dog Recover from Rat Poisoning?

Fortunately, as long as you diagnose the rat poisoning in your dog quickly and provide them with all the necessary medical attention, your dog is highly likely to recover from rat poisoning.

Depending upon the dose and the type of poison ingested, it might take your dog a few weeks to months to recover. In most cases, a few days or a week of hospitalization, a month in case of LAACS poisoning, might be necessary, followed by frequent monitoring and tests.

How Much Rat Poison will Kill a Dog? 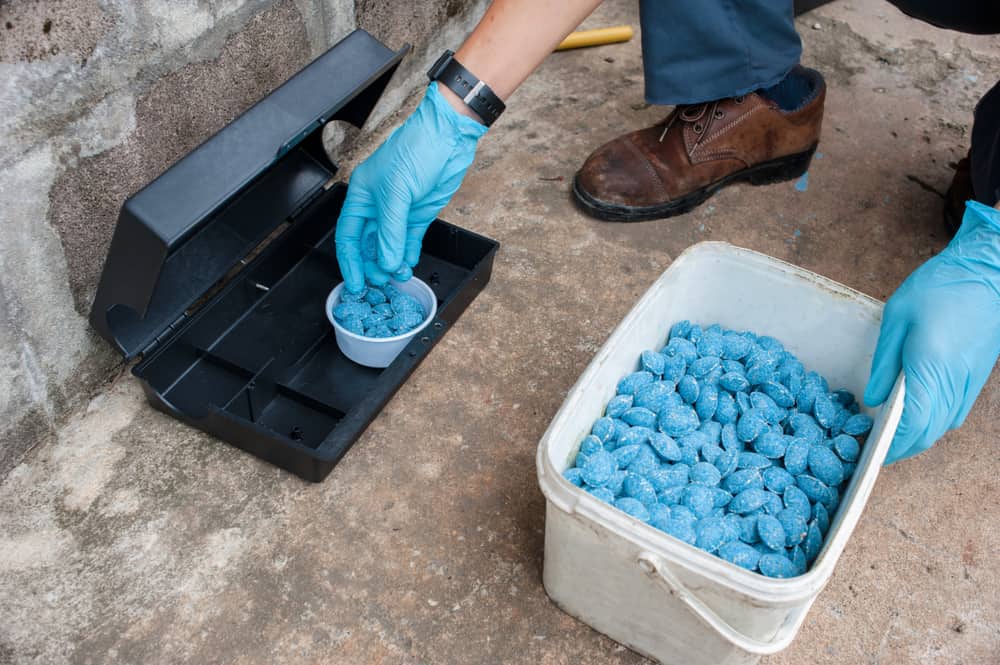 The lethal dose of LAACS depends upon the type of active ingredient used in the poison. For instance, Brodifacoum is toxic to dogs even in small doses, whereas a relatively larger amount of Bromadiolone should be ingested to kill the dog.

Moreover, age and the health status of your pet dog also play a role in determining the lethal dose as well as the time span between the ingestion and the onset of symptoms.

Bromethalin is designed to be a single-dose rodenticide; this toxin can be insanely potent and fatal even in small doses. According to Vetmeds, 1.1 mg/lb of bromethalin poison can be fatal for dogs.

Finally, the lethal dose of zinc phosphide rodenticide in most species ranges from 9 mg/lb to 18 mg/lb.

However, remember that even if your dog has ingested a small amount of rat poison and you’re fairly sure that the dose is not lethal, it is imperative that you take your dog to a vet as soon as possible.

We’d absolutely recommend you steer clear of such toxic rodenticides if you have a child or pet roaming in your house.

In case of a severe rodent problem, please use non-poisonous rat traps or call on a professional pest company to do the job for you instead. Please feel free to share any queries or suggestions you have regarding rat poisoning in dogs!