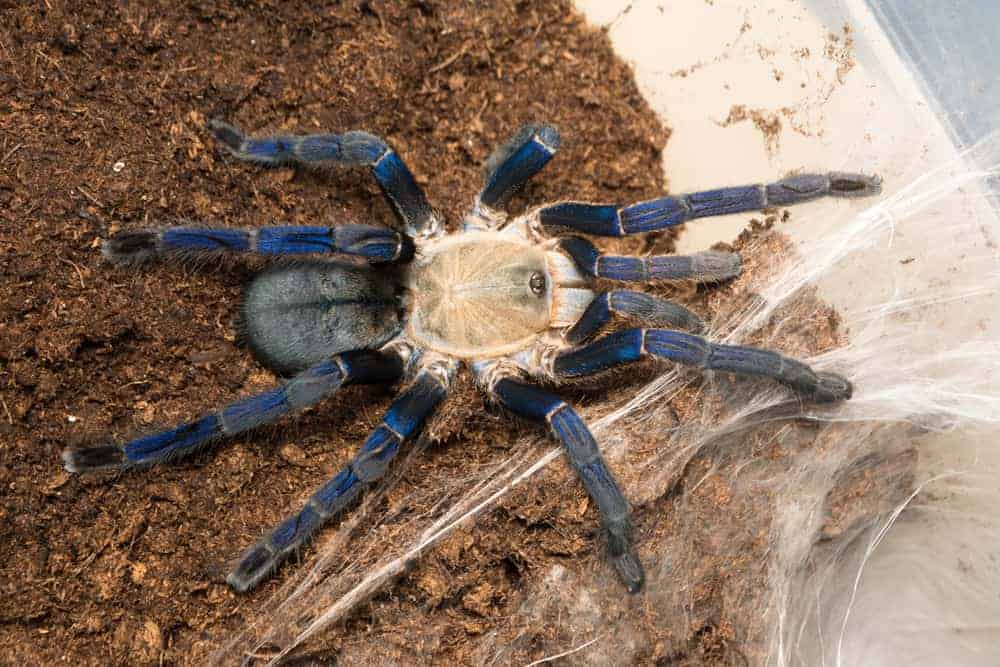 Do exotic animals fascinate you? Are you considering bringing a cobalt blue tarantula home?

These giant spiders are popular pet choices. But you must understand their temperament, mating habits, diet, and other qualities before adopting one.

This article will take you through some interesting facts about cobalt blue tarantula. Whether you are just curious about these unique arachnids or looking to make one your pet, it helps to educate yourself.

So, let us dive in and explore the world of the cobalt blue tarantula.

The scientific name for cobalt blue tarantula is Cyriopagopus lividus, but it was formerly known as Haplopelma lividum. It belongs to the Theraphosidae family. The name lividum means black and blue.

The blue cobalt tarantula is referred to as an Old World species. The terms Old World and New World refer to the origins of a particular species.

The Old World refers to regions and ecosystems outside of the Americas. These include Europe, Africa, and Asia.

The cobalt blue tarantula is an Old World species as it originated in Asia. Other tarantulas are New World as they originated from the Americas, specifically North America, Central, and South America. 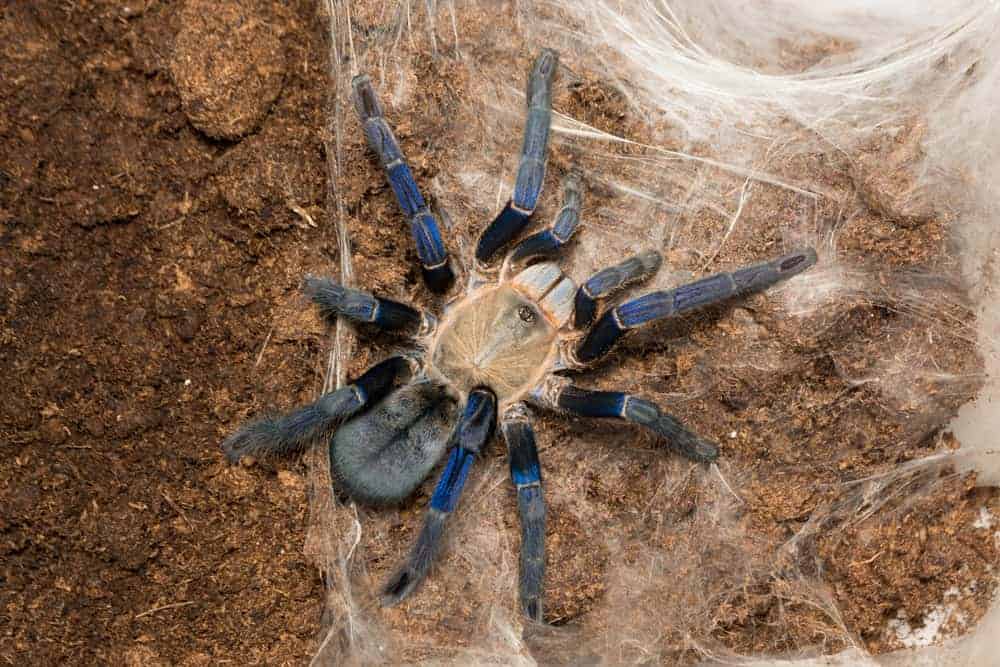 At first glance, the cobalt blue tarantula looks black. However, when you look closely or observe under the right light, you will be surprised by a bright blue, shimmery, metallic blue color.

The iridescent appearance is one of the qualities that make the tarantula so popular with hobbyists. The prosoma and opisthosoma are dark grey, giving the tarantula a shimmering blue-grey appearance.

This tarantula is medium-sized with a leg span of up to 5 inches. Both the female and male species grow incredibly fast, from small spiderlings to relatively large arachnids.

When the male spider first molts, it develops a palpal bulb, a copulatory organ. The male’s legs also increase in length more than the female’s.

The cobalt blue is a fossorial animal. It is adapted to living underground, where it digs deep burrows and tunnels.

This species is actually semi-fossorial. It spends a lot of time underground but not all time. It does occasionally emerge from its tunnels to warm up in the sun and forage for food.

Like most fossorial animals, cobalt blue tarantulas significantly impact their ecosystem. The burrows and tunnels they dig are often used by other species when the tarantula moves out. The giant spider might also pass down the habitats through the generations. 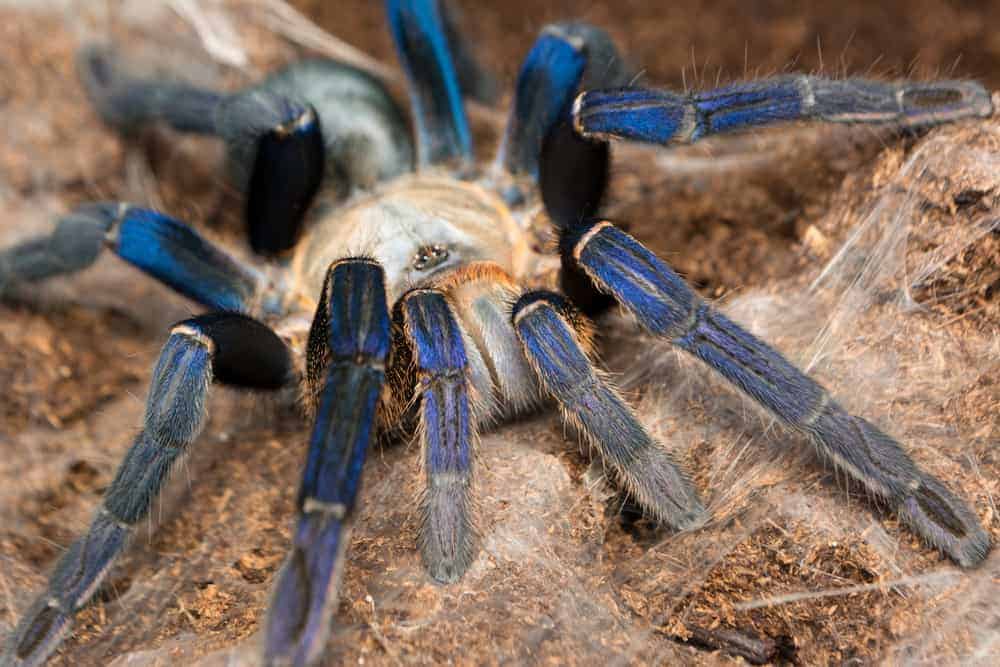 Female and male cobalt blue tarantulas have a similar physical appearance and features until the male begins to molt. Upon molting, the male changes its appearance, becoming a bronze or tan color.

Molting also causes the male spider’s legs to grow significantly longer than those of its female counterpart.

The male tarantula also develops a palpal bulb on the mating hooks, a feature not present on female cobalt blue tarantulas.

Eventually, though, the female tarantula becomes larger than the male. The female also outlives the male with approximately 10 to 12 years compared to 3 to 4 years of the male’s lifespan.

The natural habitat of the cobalt blue tarantula is the tropical rainforests of southeast Asia, including Laos, Thailand, Myanmar, and Cambodia.

This spider species thrives in a warm, humid climate. Being nocturnal and fossorial, it usually only ventures out at night looking for food. Male tarantulas also go out in search of females at night for mating purposes.

The rest of the time, the cobalt blue tarantula hangs out underneath the earth in deep burrows dug by itself or other animals. 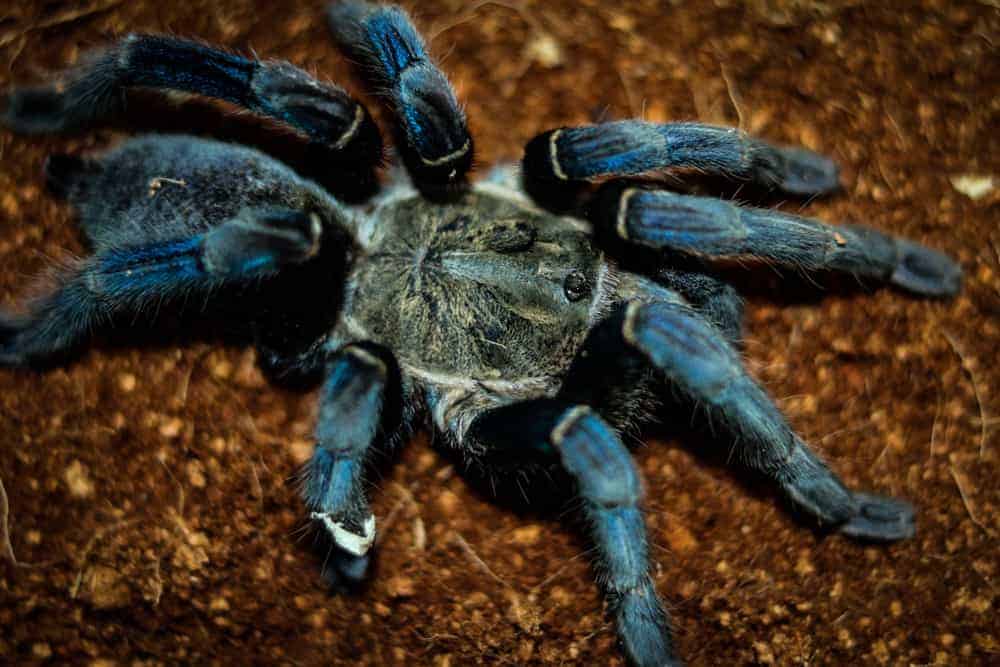 The cobalt blue tarantula can be aggressive and defensive. It is extremely sensitive to any perceived threat and is ready to attack at any time.

As an Old World species, the blue cobalt tarantula does not have the urticating hairs found on New World species. As such, they result in biting as their first line of defense.

Typically, the blue cobalt would rather retreat to its burrow when threatened than attack. But if the perceived threat is significant, it is common to strike a threat pose and deliver multiple bites quickly.

Hobbyists with experience keeping this tarantula species describe it as nervous, fast, and aggressive. Their bite is extremely painful and can be venomous.

The side effects of a tarantula’s bite include muscle cramp, nausea, excessive sweating, and sometimes, breathing difficulties.

Touching or handling a tarantula can result in an extreme reaction from the spider. Only people experienced in caring for tarantulas are advised to handle or keep them as a pet.

Beginners should not keep a cobalt blue tarantula without the supervision of an experienced hobbyist.

Starting with a less aggressive tarantula species is recommended.

The cobalt blue tarantula can go for a long time without food.

It is carnivorous, and its main food sources are mice, lizards, and other amphibians. Crickets are a common dish when the blue cobalt is kept as a pet.

The venom produced by blue cobalt is not always poisonous to humans. But, it is always toxic to its prey.

Blue cobalt spiders form an extensive web, which helps to capture prey. When its prey is caught in the web, the tarantula delivers a toxic sting that kills the prey. It then drags the catch back to its burrow.

The tarantula has a poor sense of sight and hearing, so it cannot see or hear its prey. Instead, it depends on vibrations from the prey caught up in its web

After paralyzing its prey, the tarantula releases enzymes that liquefy the victim, making it easier to feast on it.

The sting of blue cobalt tarantula will vary depending on the victim. When released on a human, the venom typically doesn’t cause death.

The ability to differentiate between a human and its prey and regulate its venom accordingly is a distinct characteristic of cobalt blue tarantulas. 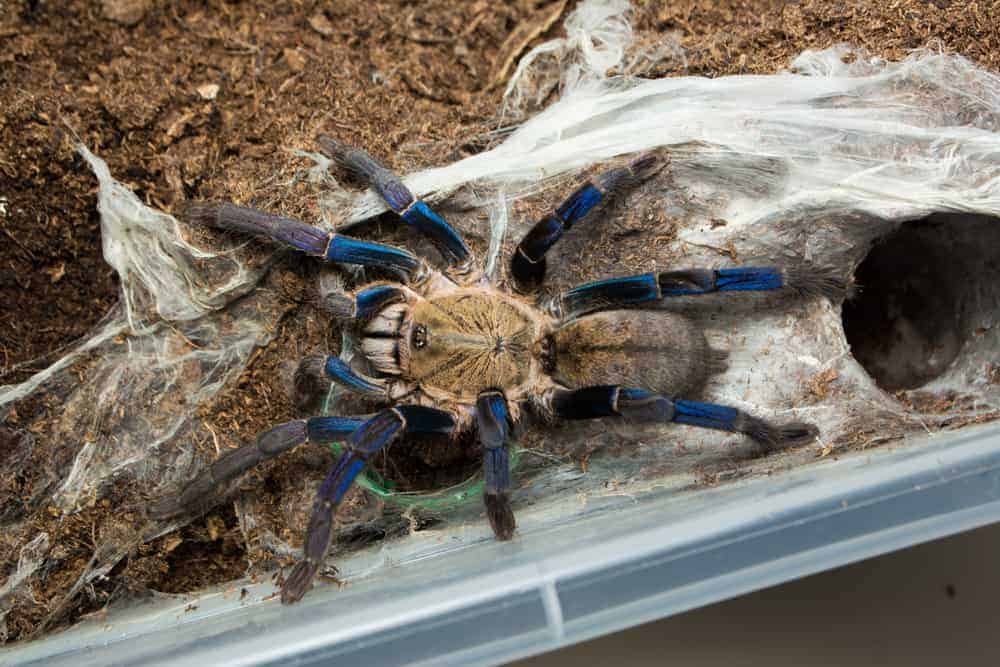 During mating, the male cobalt blue heads over to the female’s burrow. It vibrates its body and performs a tapping ritual urging the female to come up from its burrow.

If the female is ready for mating, she comes out from her burrow and invites the male inside, where they proceed to mate.

The female cobalt blue lays her egg in a white sac she keeps in the burrow. She can lay up to 1,000 eggs and cares for her eggs until they hatch.

Sometimes, the female spider can attack, kill the male spider and eat him up after mating. This only happens rarely, but it is not unheard of.

The mother spider’s eggs hatch into spiderlings after 45 to 60 days. They typically stay with their mother approximately 3 to 6 days before they venture out on their own.

Spiderlings are as aggressive and defensive as a grown tarantula. They can deliver an equally painful sting and a toxic venom to their prey.

The cobalt blue tarantula has eight eyes. Yet, it has a poor sense of sight. Zoologists also believe that these tarantulas have weak auditory faculties.

This spider relies on its sensory receptors in the legs and body hairs to navigate its surroundings and detect imminent threats.

Like most tarantula species, blue cobalt tarantulas molt at least once a year. Molting is the process in which the animal renews its outer body, also known as the exoskeleton. During this time, the tarantula also regenerates missing limbs and appendages.

During the molting process, the spider will turn on its back to shed off its older exoskeleton and grow new appendages. This is the most practical position for this process.

When molting is complete, the exoskeleton and the tarantula will lay side by side, with the exoskeleton shell looking like a spider but is an empty shell in the real sense.

The new exoskeleton will be soft and pale in color. Touching, handling, or feeding the newly molted tarantula can damage the exoskeleton and potentially lead to an early death.

When housing a cobalt blue tarantula as a pet, you will increase the chances of survival by replicating the natural habitat as closely as possible.

The depth of the substrate in which you house the giant spider is more important than the length and width of the container.

Ideally, blue cobalt will flourish in substrates approximately 20 to 25cm deep. Mixing a substrate containing vermiculite and peat moss in equal proportions is recommended to allow the tarantula to dig its channels and burrow as much as it needs for its own survival.

Cobalt blue tarantulas require humidity levels of 60 to 70 %. This is why vermiculite is recommended, as it helps to hold moisture and maintain appropriate humidity levels.

Spraying a corner of the enclosure with water a few times a week can help retain the appropriate moisture and humidity levels.

The appropriate length and width of the glass enclosure should be at least three times the spider’s length.

Cobalt blue tarantulas require temperatures of about 26 to 32oC for optimal growth. Placing a small heating pad underneath the glass enclosure can help achieve and maintain these temperatures.

Feeding a cobalt blue the first time it is placed in captivity is not recommended. Give the big spider time to acclimatize and adjust to its new surroundings in the enclosure.

Blue cobalt tarantulas need enough time to start digging their burrows and spinning the web. The best introductory diet for young tarantulas is pinhead crickets. The type and size of prey can change and increase as the spider grows.

This species is a big eater and will not hesitate to grab any prey you place close to the entry of its burrows. Mature tarantulas should be fed at least two times a week.

A refusal to eat is a major sign of molting. Cobalt blue tarantulas should not be fed when molting because they are defenseless during this time, and their own prey can eat them. This can lead to severe injury or death.

Spiderlings will stop feeding a few days before they start molting. Older tarantulas will stop eating weeks before the molting process begins.

Feeding can be resumed once the molting has come to an end.

Blue cobalt tarantulas kept as pets are usually bred in captivity. Capturing tarantulas in the wild and keeping them in captivity as pets is a form of exploitation and can hurt the ecosystem, causing these species to become extinct.

When breeding, it is important to imitate the spider’s natural environment as closely as possible. The ideal temperature, humidity, and moisture levels must be observed to ensure the successful breeding of as many eggs as possible.

The best time to mate a female and male cobalt blue is when the female has recently molted. This will ensure she does not molt soon after mating.

Before mating, the female should have a large enough enclosure. She also needs enough time to dig a burrow to retreat to after mating to lay and protect her eggs.

The female tarantula should be on a full stomach 24 hours before introducing the male. It is recommended that you remove the male from the enclosure as soon as mating is completed.

Following successful mating, the cobalt blue female typically releases an egg sac at week 8. It is best to leave the eggs with the mother tarantula for the first 30 days. There should be limited movement around the enclosure during this time.

Cobalt blue tarantulas are some of the most fascinating of Old World arachnids. Not only are they gorgeous in all their shimmering blue glory.

The blue cobalt also makes for wonderful pets if you know how to handle, feed, and generally care for them.

I hope this guide on the facts about cobalt blue tarantula piqued your interest and will help you make a smart decision if you are looking to adopt one of these.