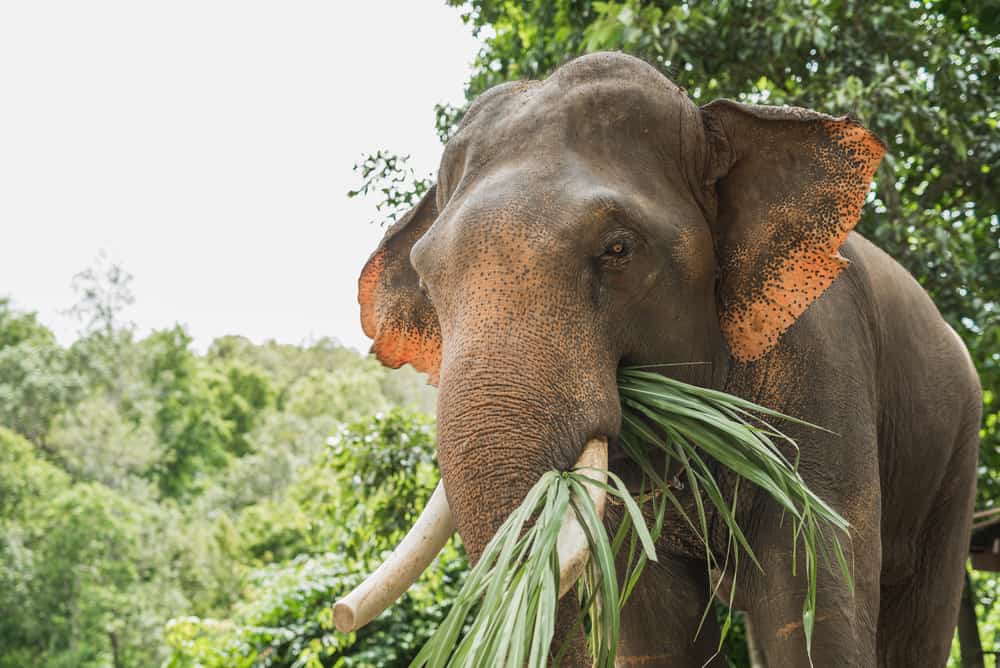 What’s the biggest ant in the world? The elephant. These gentle giants are most known for their tusks, trunks, and size. They also have healthy appetites, but what do elephants eat?

Here you will find out what elephants like to eat and how they go about attaining it.

Elephants are the largest living land mammals. There are three species of elephants that are named after the areas they inhabit. They include:

They are found throughout sub-Saharan Africa, South Asia, and Southeast Asia.

Elephants are social creatures that live in groups called herds. They have complex social structures that vary in regard to gender and population.

Adult females form matriarchal societies where a matriarch usually leads the herd. The term matriarch refers to the lead female.

Matriarchal herds comprise the female and her daughters together with their young ones (calves). The herds may also include other related female and their calves.

When the matriarch dies, the eldest daughter usually takes over.

Adult males, on the other hand, tend to be solitary. However, they are also known to interact with other males and form their own herds. The leader is determined by age and strength. They protect the front of the herd.

Elephants are herbivorous and feed only on vegetation. They mainly feed in the morning, afternoon, and at night and rest at midday. They stay near water sources when it’s available. 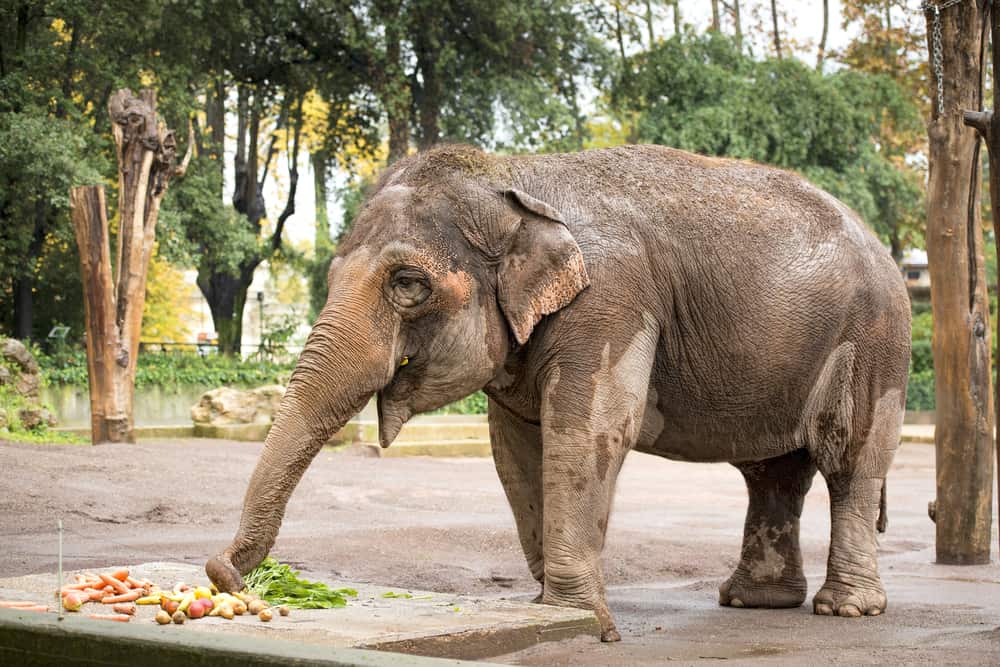 They eat a lot of food and drink a lot of water. A single elephant can eat upto 150 kilograms of food. Yet, they digest only a small amount of what they ingest.

Elephants are equipped with trunks to breathe, grasp objects, and bring food and water to the mouth.

These gigantic mammals also have tusks that are used as weapons and tools for digging and moving objects.

Lastly, elephants have strong legs that carry their weight.

Elephants are non-ruminants which means that food undergoes fermentation after digestion in the stomach. Only small amounts of nutrients are absorbed by elephants from the foods they eat.

To compensate for low nutrient absorption, elephants eat a lot of low-quality vegetation. Hence, these gigantic mammals possess the capability to survive in a wide range of environments.

Yes. Elephants eat dirt. They do so to supplement their diets mainly with sodium.

Elephants dig up dirt to obtain salts and minerals from the ground. They use their tusks to churn (stir) the ground, then place the loose pieces of soil into their mouths.

This behavior is shared among all species of elephants. They regularly consume soil.

What Do Elephants Eat?

Just like their sizes, these big fellows have big appetites. They eat vast amounts of vegetation daily. Nevertheless, only 40% of what they consume is digested. The rest of the plant matter eaten is pooped out.

It’s been said that nearly 60% of an elephant’s feces is undigested. For this reason, these beasts are referred to as keystone species.

Keystone species are creatures that help maintain an ecosystem. That is, other animals or plants benefit in one way or another from them.

In this case, elephants’ undigested poop may act as a food source for other animals such as dung beetles. Baby elephants or calves also eat the feces of their adult counterparts.

Calves eat their mothers’ or herd members’ poop to obtain the much-needed digestive bacteria that allows them to digest plant matter.

Grasses are the most fed on plant matter by elephants, be it by African elephants or those in Asia. Examples of grasses that elephants eat include the following:

Elephants are prone to diseases and even death if they are fed or feed on the wrong types of foods. Other foods, if ingested in large amounts, can be harmful; these include:

Anthrax is among the fatal diseases impacting elephants. High fevers, swellings, shivering, and ulcers are symptoms displayed by the mammals affected by the disease. In elephants, it’s spread through drinking contaminated water.

Water is just as crucial to elephants as food. All the same, it also poses threats to the well-being of elephants if contaminated.

Rising elephant populations in smaller areas cause elephants to share resources. In turn, overcrowding leads to contamination of water resources and occurrences of parasitic diseases.

You should ensure to inspect and clean any fruits and veggies before feeding them to elephants. Contamination of these foods may spread diseases or parasites harmful to the elephant’s health.

Elephants require special care and should only be looked after and fed by trained professionals. Aside from what they eat, their general health is just as important.

Provide the elephant with at least 2000 liters of water daily. The water you give them should be hot.

Lastly, you should check the drinking water every morning to ensure it is not contaminated. If possible, test the water for the presence of metals such as copper and zinc.

Like humans, elephants also like taking baths. Wash them every day and ensure to inspect the elephant from head to toe after doing so. It’s important to also remove dead skin from their backs with soap and a brush.

After the bath, allow the elephant to cool off in the sun or keep it indoors to prevent it from getting chilly.

Elephants are heavy eaters and should be provided with a lot of food each day. They are strict vegans, and everything you feed them should be green. Give you elephant grasses such as Napier grass or hay, which is easy to grow and maintain.

When or if it’s available, provide them with bermudagrass as well, as it is a favorite. Most of these grasses more or less offer the same nutrients for the elephant. Supplement the elephants’ diet with fruits.

Elephants should also be provided with food rich in calcium to aid in bone development. The elephant should have free space to graze and feed on variations of vegetation.

By following these simple but crucial steps, you are well on your way to becoming a professional elephant caregiver.

No. Elephants are herbivores and strictly feed on vegetation. Even if offered meat, they will ignore it. Elephants are poor digesters, and their systems are not capable of absorbing nutrients from unfamiliar foods.

Elephants don’t eat peanuts. This misconception came about from people who visited zoos and threw peanuts at elephants in hopes they’d eat them.

Elephants are by far the most magnificent creatures on earth. As keystone species, they play an essential role in maintaining ecosystems and the environment at large.

Now that we know what elephants eat, we should make it our mission as wildlife enthusiasts to safeguard their environments.