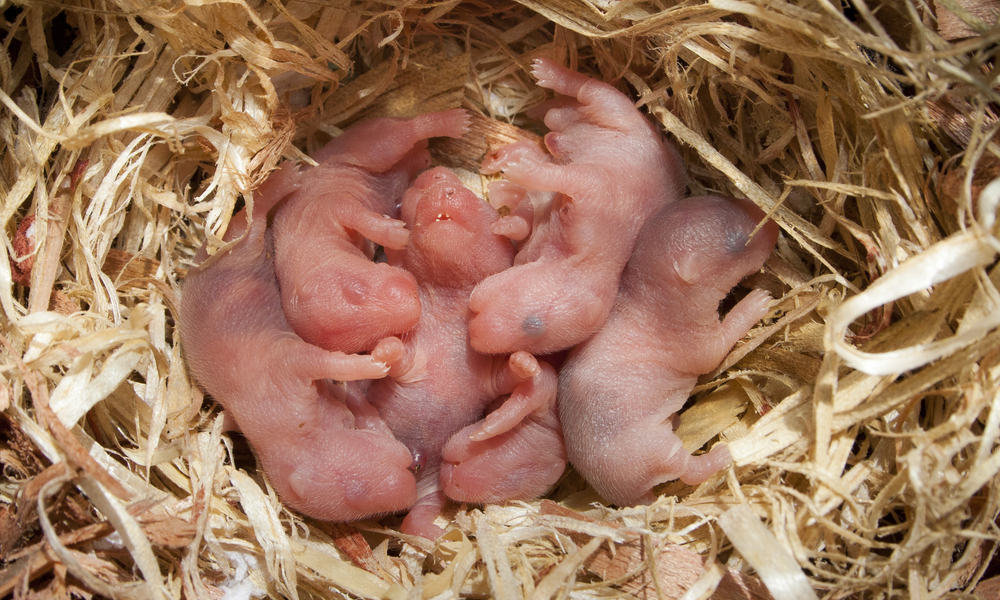 Hamsters are undeniably super-cute little creatures, and their helpless pink babies are possibly even cuter – which makes it all the more horrifying when they do something as seemingly inexplicable as eating their own young.

It’s bad enough for an adult to watch, but for young children who witness this brutal act of cannibalism, it can be quite upsetting. So to help you understand why it happens – as well as what you can do to stop it – here we answer the question, why do hamsters eat their babies? 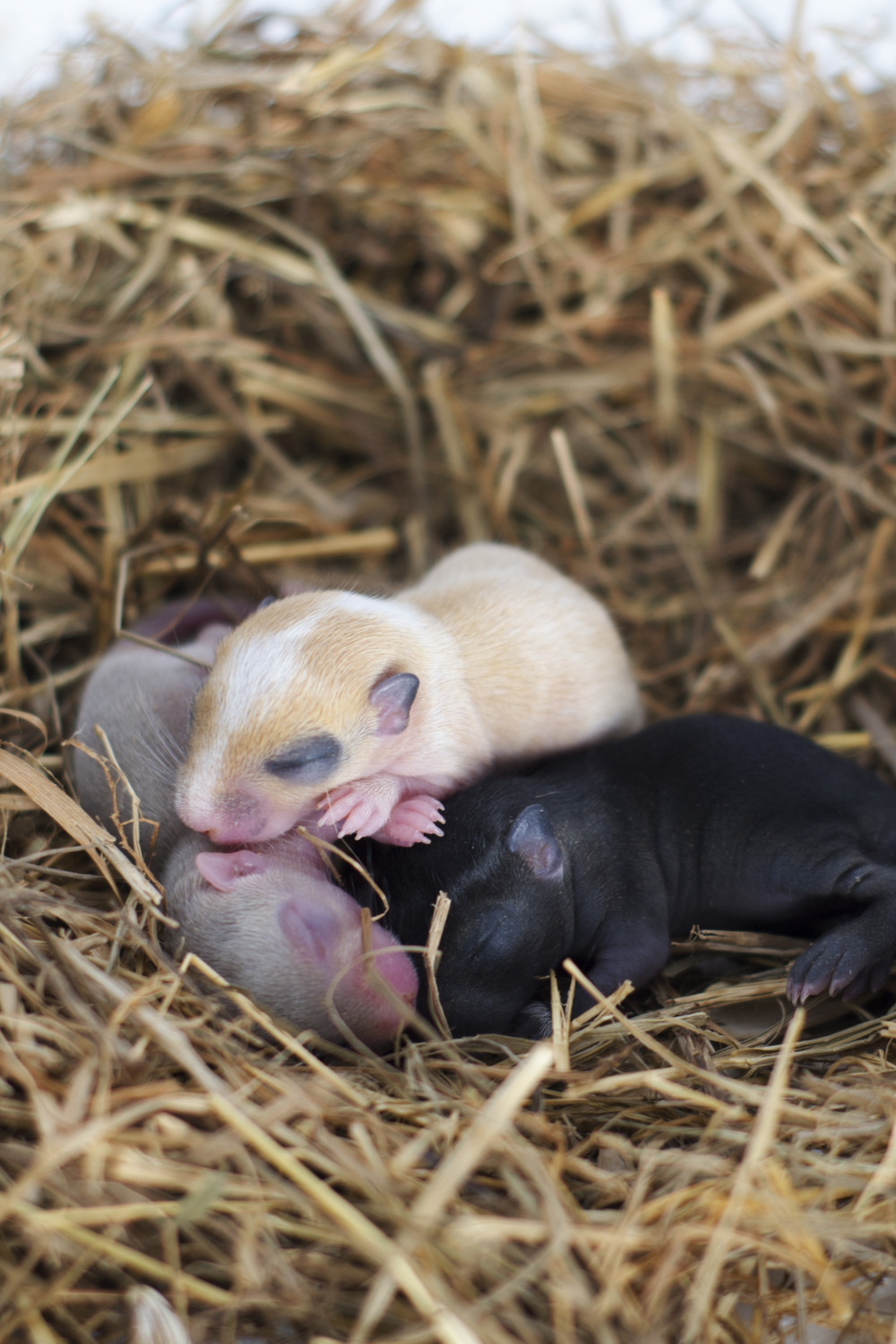 Before we talk about why hamsters may sometimes eat their babies, let’s start by talking about their reproductive cycle in general since that will help us understand why things can sometimes go wrong.

When hamsters are born, they are deaf, blind, immobile and completely helpless. However, they mature quickly and are ready to be weaned within around three weeks.

The gestation period of a hamster is about three weeks, after which they give birth to litters of between one and over twenty young, depending on the species. A normal litter size for Syrian hamsters is about seven. For most others, it is usually slightly fewer.

Hamsters come into estrus every four days and can become pregnant once a month. Female hamsters have a reproductive life of around eighteen months, giving them the capacity to give birth to a large number of young during their lifetime.

Preparing to give birth 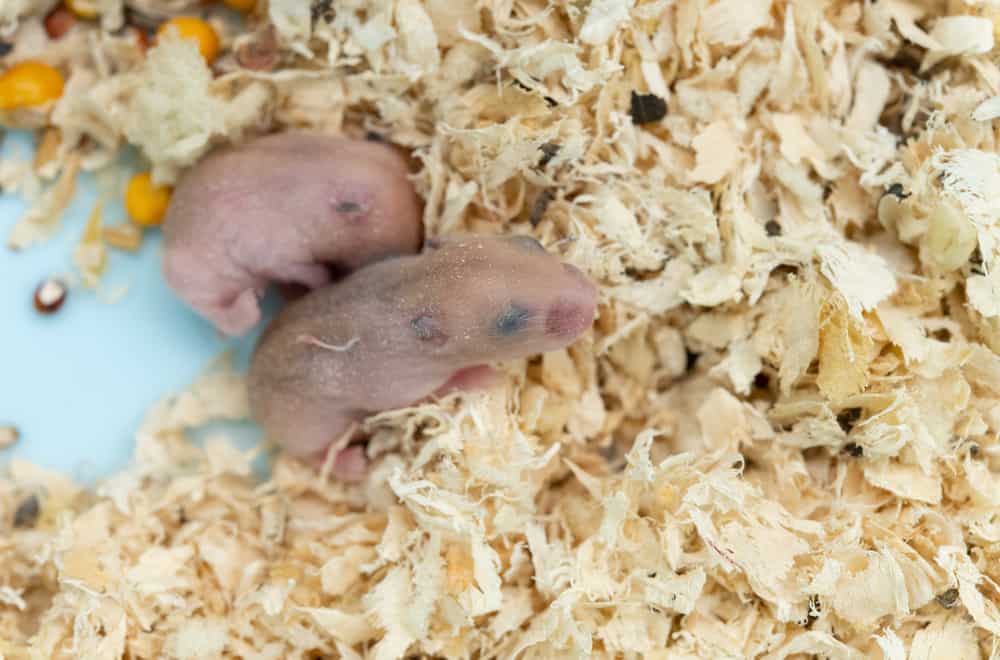 When female hamsters are about to give birth, they find a quiet, secluded spot to make a nest. In captivity, they will usually line it with tissue paper, shredded paper, sawdust, cage substrate or whatever else they have available.

They will also begin to eat more than usual to allow their bodies to begin producing the milk required to feed the hamster pups.

Then, probably at some point during the night around three weeks after mating, the baby hamsters will be born, and the cycle will begin again.

However, for the first weeks of their life before they are weaned, the young are at risk of being eaten by their mother – so now let’s have a look at why this may happen.

Reasons why hamsters eat their babies 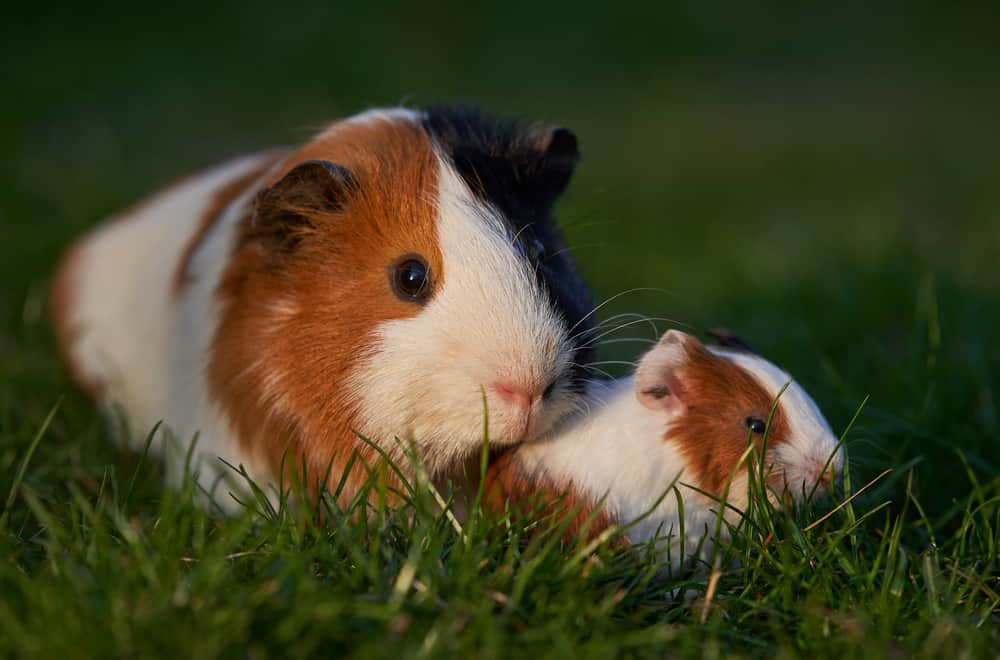 There are several reasons why hamster mothers will eat their young – here are some of the most common:

If a hamster is stressed, it may drive it to eat its babies. It’s not clear why this happens, but perhaps it is a way of ensuring the nutrients used bearing and feeding the young are not wasted if the hamster thinks the babies are not likely to survive.

Factors that can cause stress to nursing hamsters are loud noises, being handled too much and the general excitement people may have around a hamster that has just given birth.

Sometimes, the simple stress of rearing a litter of pups may be too much for some mother hamsters, at which point they opt to hit the “abort” button and eat the babies instead of caring for them.

2. Mother thinks they’re in danger from a predator

This reason is similar to the first. If the hamster thinks the young are at risk from a predator like a cat, it may choose to eat the young itself rather than let the predator eat them.

Again, the reasons are not completely established, but it would make sense in a coldly logical way to re-ingest the nutrients from the offspring rather than allow the predatory animal to benefit from the babies for free.

Hamsters giving birth to their first litter are considerably more likely to eat their young, and this is probably due to the stress of the unfamiliar situation.

During pregnancy, the hamster’s body undergoes changes and is filled with hormones, and the whole experience can cause a great deal of stress for the animal.

Then, when the babies arrive, the mother may proceed to eat them because she doesn’t really understand what is happening.

However, the good news is this is less likely to happen after subsequent pregnancies.

Sometimes, when a hamster gives birth to a large litter, the mother may reject or even eat some of the pups to give the others a better chance of survival.

Hamsters only have 12 nipples, so if the litter exceeds this number, the weaker pups will probably find it hard to feed, and in this case, their likelihood of survival is reduced.

If they die through rejection and inability to feed, the mother may then eat them to ingest the nutrients. It may also be a way of keeping the nest clean since a dead baby hamster will quickly begin to smell and may attract predators.

Alternatively, the mother may simply eat one or more of the babies simply to relieve pressure on herself and the rest of the family, giving the remaining babies better odds of survival.

Another reason hamsters can devour their young is that they don’t have enough food.

A mother hamster needs to eat more than usual to be able to provide milk for her pups, and she also needs a balanced diet with enough protein as well as plenty of water.

Without this, she may instinctively realize that she isn’t receiving enough nutrients from her diet to care for her pups, so she turns to eating them.

This serves the dual purpose of returning valuable nutrients to her body while also reducing the number of mouths she has to feed, so by consuming one or more of the babies, she may be better able to care for the ones that are left.

Hamsters need a minimum amount of space to thrive and raise young, and in the wild, if a hamster colony suffers from overpopulation, mothers may eat their young to keep numbers down.

In captivity, the same thing may happen if the cage is too small. The mother hamster can feel that there are too many hamsters in such a small space, so she decides to eat some or all of her babies.

This is perhaps one of the best-known reasons for hamsters to eat their babies.

Hamsters have poor eyesight, but they have a keen sense of smell, and they use it to identify their mate and their babies. A mother hamster may even mark her babies with scent from a gland to help her recognize them.

The problem is that if you then touch the babies, the babies will also pick up your scent, causing the mother to no longer recognize her own young.

A mother hamster may sense that there is something wrong with one of her babies. Perhaps it’s ill, or perhaps it has some kind of physical condition – and it could be something that we are not even aware of.

When this happens, the mother may reject the baby and it may die, and she may then eat it to keep the nest clean. Alternatively, she may just eat the baby directly since she thinks it’s unlikely to survive.

Sometimes, a mother hamster may kill one of her babies by accident. She may bite it too hard when picking it up, or it may suffocate when she carries it in her pouch.

She didn’t mean to kill the baby, but after it dies, she will then eat it – again, to keep the nest clean and to not waste the valuable nutrients.

10. Killed by another hamster

Occasionally, one or more hamsters may go missing from the nest, and we then blame this on the mother – but perhaps it wasn’t her at all. Maybe another hamster got to it instead.

The babies’ father won’t tolerate babies, and if he can, he will happily eat them. If you keep other females in the same cage as a nursing mother, she may also kill and eat the babies.

11. Left too long with mother

If you leave a mother hamster with her babies too long, her mothering instinct will wear off and she will begin to see the young hamsters as rivals. When this happens, usually after around three weeks when the babies have been weaned, she may kill and eat her own babies.

How to prevent hamsters from eating their young 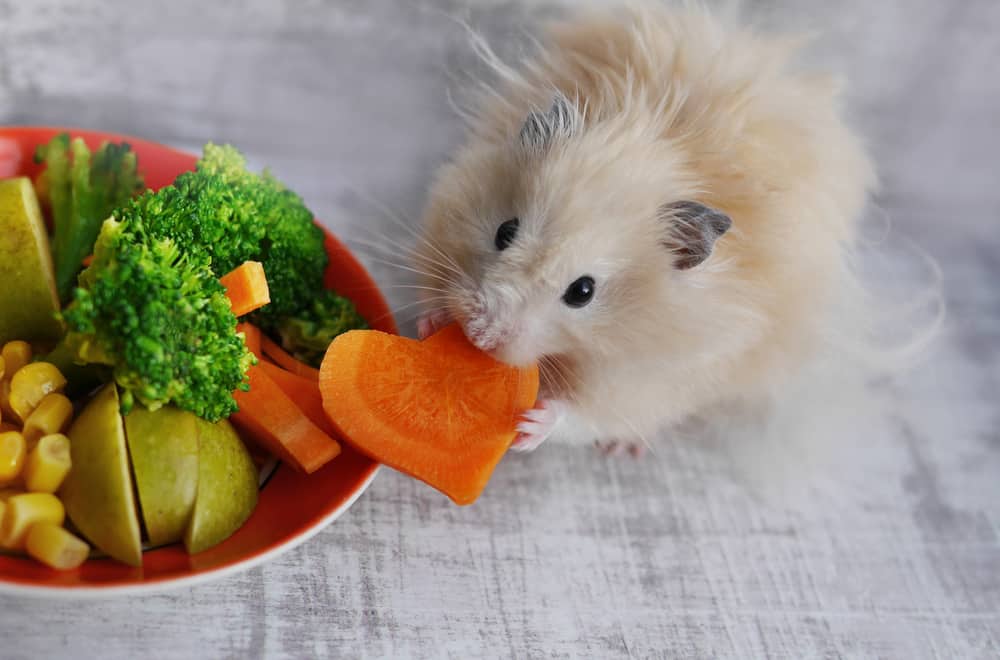 So as we have seen, there are quite a few reasons why hamsters kill and eat their babies, but knowing these reasons can help you take the necessary steps to prevent it from happening. Here are a few suggestions for minimizing the risk:

Make sure a nursing hamster has lots of peace and quiet

Don’t disturb a mother hamster, don’t make lots of loud noise, don’t handle her and don’t allow children to handle her. If you give a nursing mother hamster the peace and quiet she needs, she is much less likely to eat her young.

If you know your hamster is pregnant, make sure she gets lots of food leading up to the due date. Supplement her usual food with plain cooked chicken or beef to give her some extra protein, and make sure she has access to fresh water every day.

Continue to give her plenty of food right up until the pups are weaned to meet all her nutrient requirements while caring for her young.

Make sure the cage is large enough

This will discourage her from killing the babies through perceived overcrowding.

Never touch baby hamsters to avoid putting your scent on them and causing them to be rejected. If you touch them, you are putting them at serious risk of being eaten.

It should be safe to touch baby hamsters after two to three weeks around when they are weaned – but before that, it’s best to just leave the mother to care for them herself.

A clean cage will help reduce stress for the mother – but be very careful when cleaning it because you don’t want to disturb the nest or touch the babies.

Remove other hamsters when one gives birth

When a hamster is about to give birth, separate any other hamsters to allow the mother to nurse her young in peace.

Try to keep an eye on the litter to identify any babies that are being rejected. If you act quickly enough, you may be able to save the rejected animal by removing it from the nest and nursing it yourself.

Since hamsters often give birth at night, if you know your pet is pregnant, take special care in the morning when you go into the room where the hamsters are kept. This way, you will avoid scaring a hamster that has just given birth only a few hours before.

Remove hamsters from mother after weaned

This will stop the hamster turning on her own young because she sees them as rivals.

How to know if a hamster is pregnant 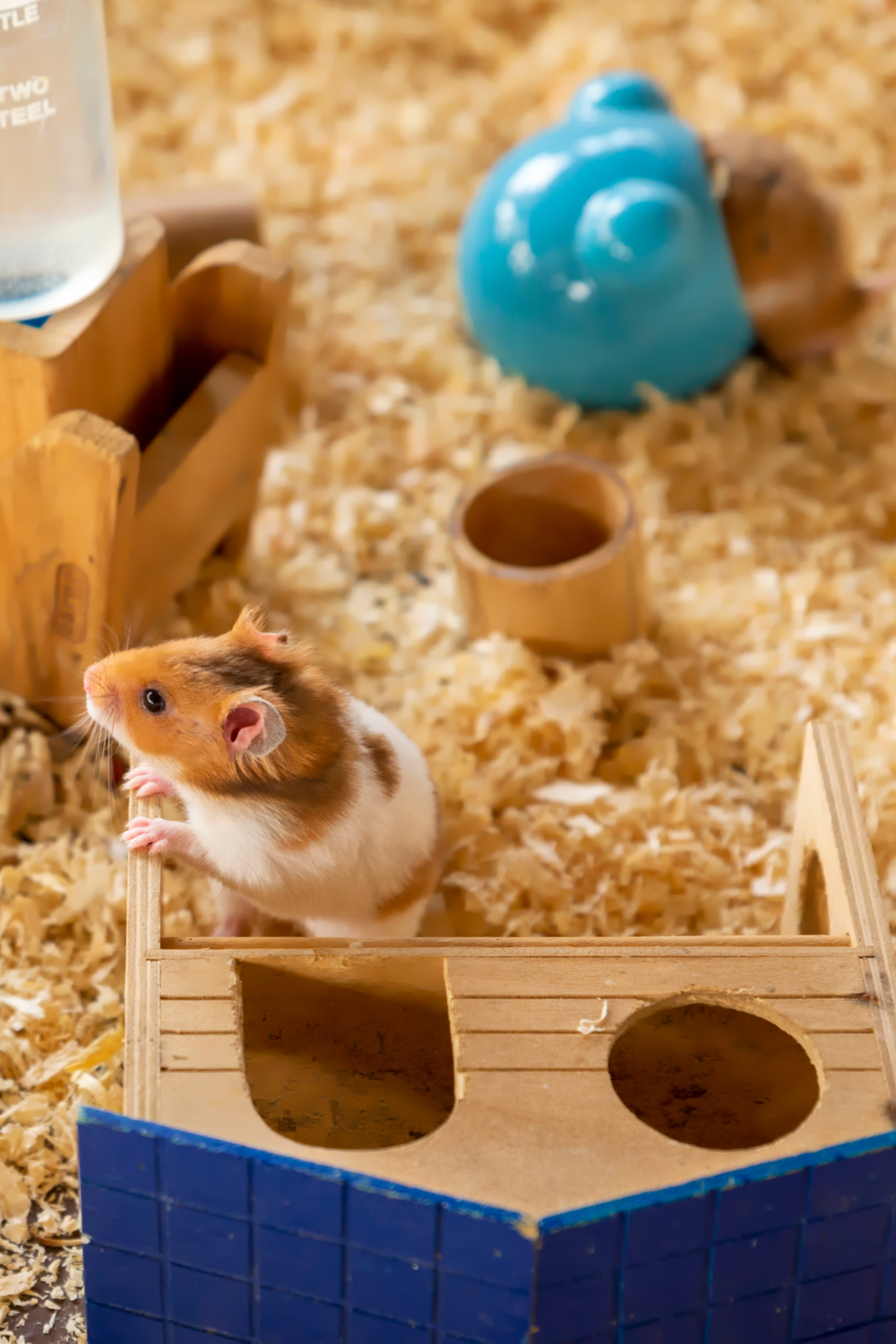 Since there is a lot you can do to reduce the risk of a hamster eating her babies if you know she is pregnant, it’s a good idea to learn how to spot a pregnant hamster – so here are the tell-tale signs to look out for:

Hamsters eating their own young may seem appalling to us, but for them, it’s a natural and instinctive reaction to certain conditions. It’s also logical since it avoids wasting the valuable nutrients that went into creating the baby and may help the rest of the litter survive.

However, even if it’s natural, it’s still something you’ll want to avoid, and by being aware of the different factors that are at play, you can act to reduce the risk of your hamster cannibalizing her young, which will hopefully lead to her rearing a happy and thriving litter of pups.