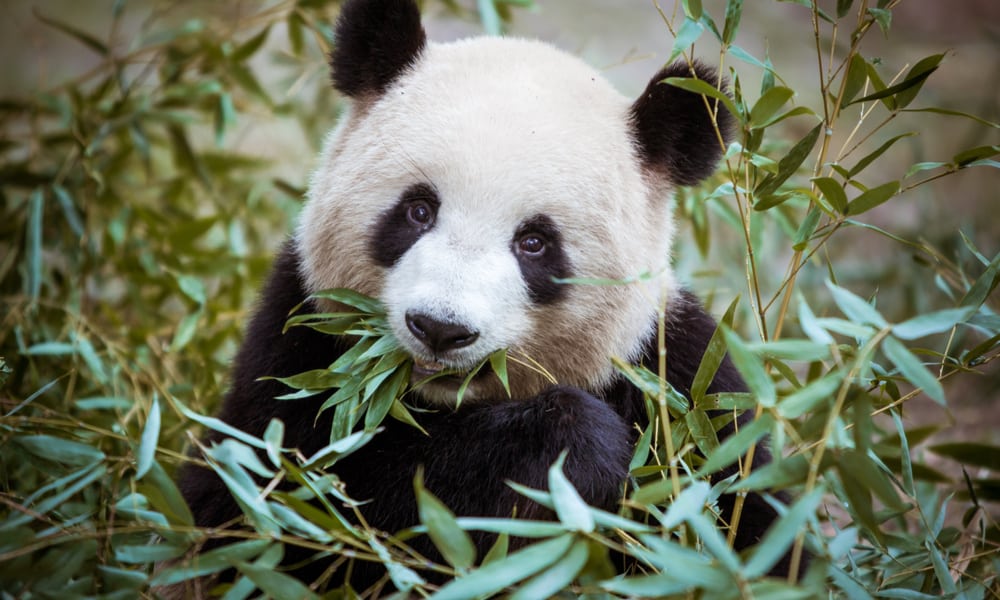 The giant panda is one of the world’s most iconic animals and is a symbol of the fragility of nature – as well as a beacon of hope for the future if we take action to protect our planet and the animals we share it with.

They are also among the cutest creatures alive, and their peaceful, playful demeanor is incredibly endearing, as is their penchant for endlessly chomping on bamboo.

Their legendary love for this food is the result of an intriguing evolutionary tale, so to tell the story, here we answer the question, why do pandas eat bamboo?

If you want a preview of some of the stuff we’re going to be talking about – or if you just want to see some cute pandas doing cute panda stuff – you can check out this video too before reading on.

What exactly do pandas eat? 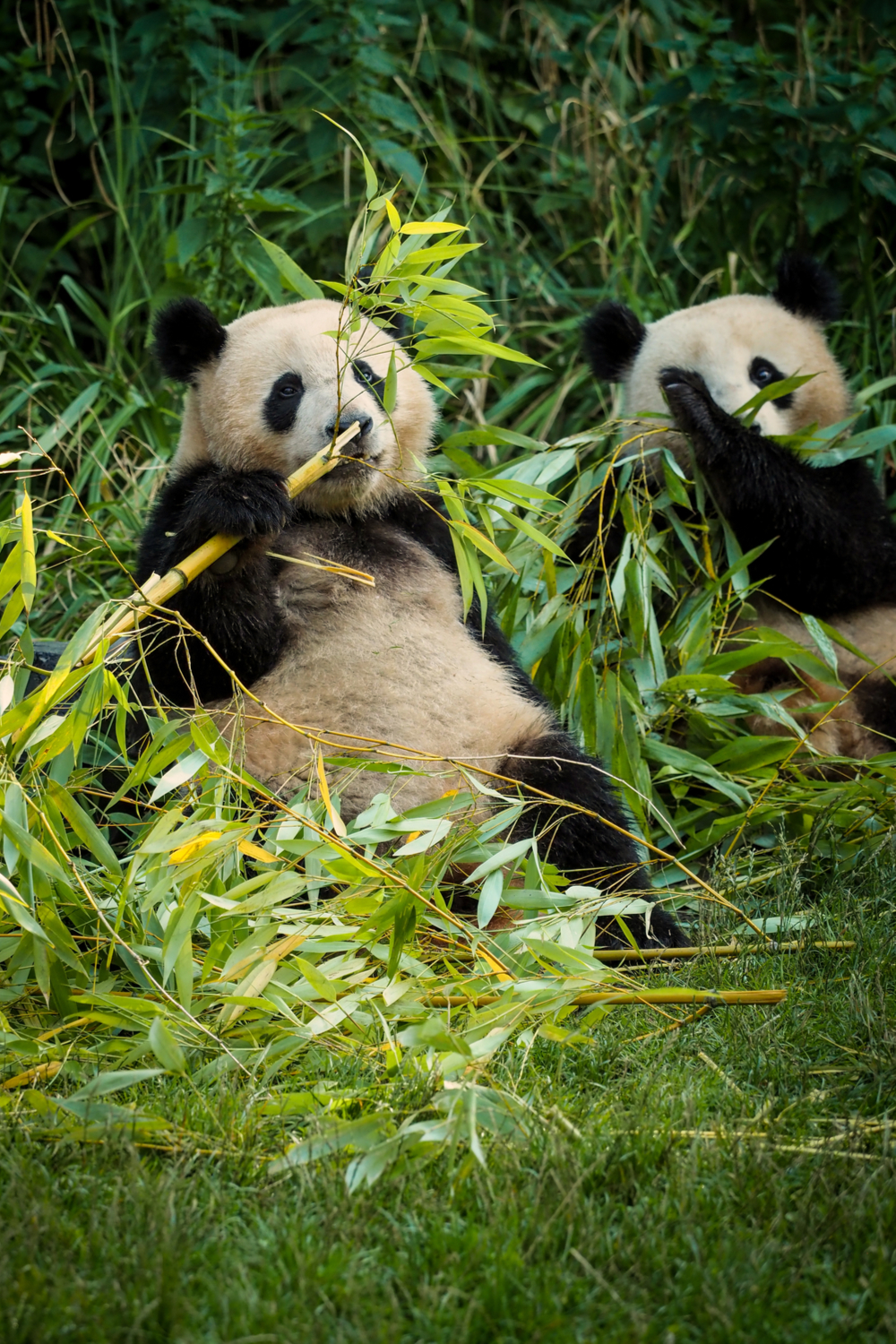 Everyone knows that pandas adore bamboo, but perhaps not everyone realizes quite how much.

In fact, a panda’s diet consists almost exclusively of this single plant, with bamboo making up 99% of the food they eat.

In captivity, even when other food is available, they still choose to consume huge quantities of their favorite plant, with bamboo making up around 75% of their diet.

But in the wild, what makes up the other 1%?

When they can, pandas will occasionally catch and consume small rodents like pikas as well as birds, fish, eggs or whatever else they come across. But still, bamboo is unquestionably their favorite snack, and something they seemingly never get bored of munching.

The paradox of a panda’s diet 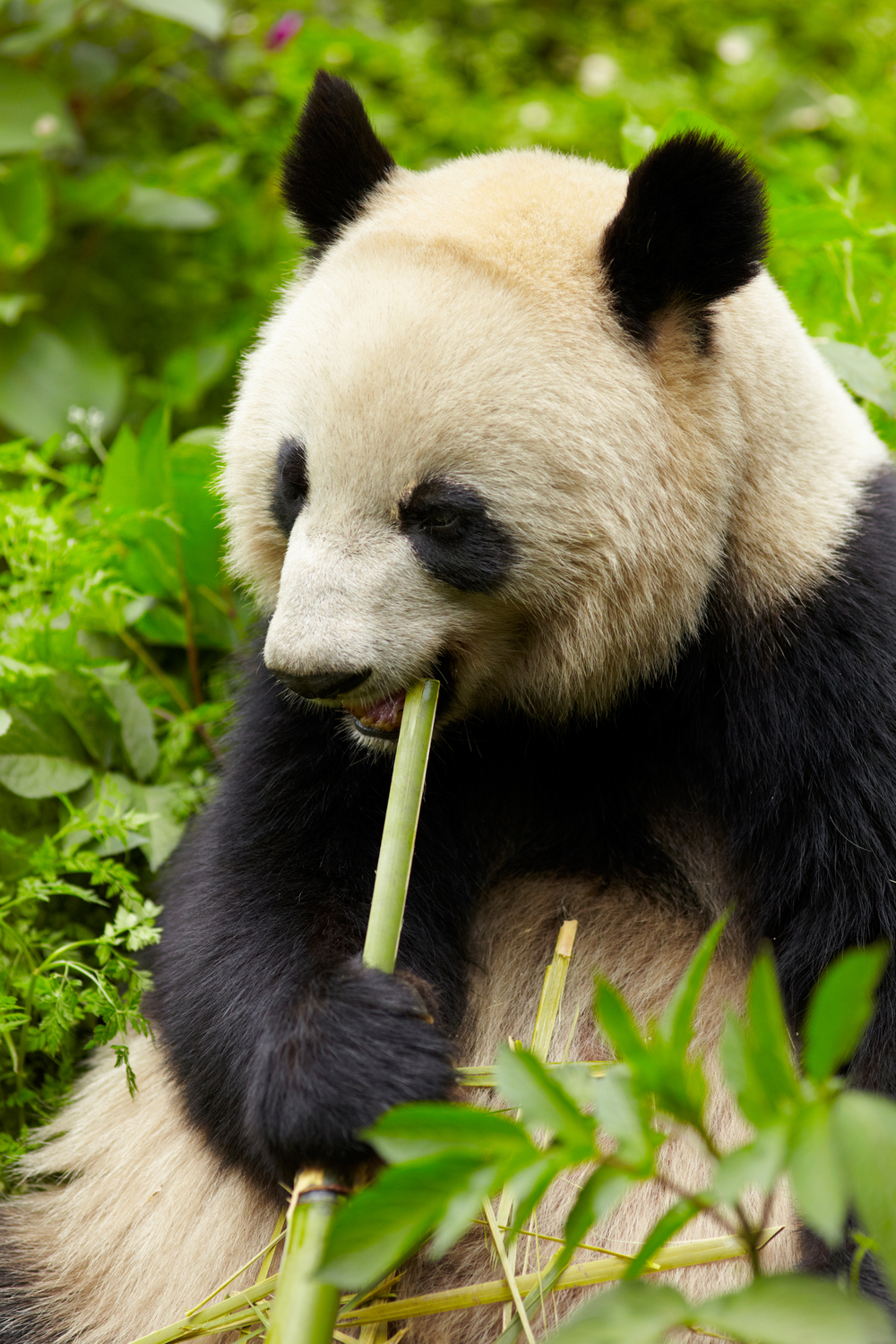 Despite pandas’ passion for bamboo, when you look more closely at their physiology, it becomes apparent that this devotion to bamboo represents something of a paradox – because, in many ways, pandas are not well suited to surviving on a vegetarian diet.

Pandas belong to the Carnivora clade, and as the name suggests, most of the other animals in this group are carnivores or at least omnivores. Pandas are a rare member of this clade that lives almost exclusively on a vegetarian diet, which makes them an evolutionary anomaly.

Pandas do display some adaptations for eating bamboo, but at the same time, like most of their closest relatives, much of their physiology appears to be set up for eating meat.

For example, pandas have molars that are good for chewing bamboo. They also have a relatively large head compared to similar animals, which gives them stronger muscles in the jaw to help them masticate their favorite food.

Another interesting feature of pandas is that one of the bones in their wrists has become elongated into a kind of “pseudo-thumb”, which is a useful adaptation that helps them grasp their favorite food while they chew on it.

However, pandas have short small intestines and simple stomachs that are poorly suited to digesting plant matter – they don’t have multi-chambered stomachs like cows, for example.

They also don’t possess the gut flora or enzymes that are required to obtain the maximum nutrition from plant matter, something that makes bamboo something of an inappropriate food for them to eat.

Bamboo isn’t a rich source of nutrients in the first place, but to compound this, the digestive system of a panda isn’t as efficient as those of other herbivores at absorbing cellulose, so it would seem to make little sense for pandas to eat bamboo.

So strange is the mismatch between what they are evolved to eat and what they live on that some scientists decided to investigate further, and the results were surprising.

Nutrients to feed a carnivore 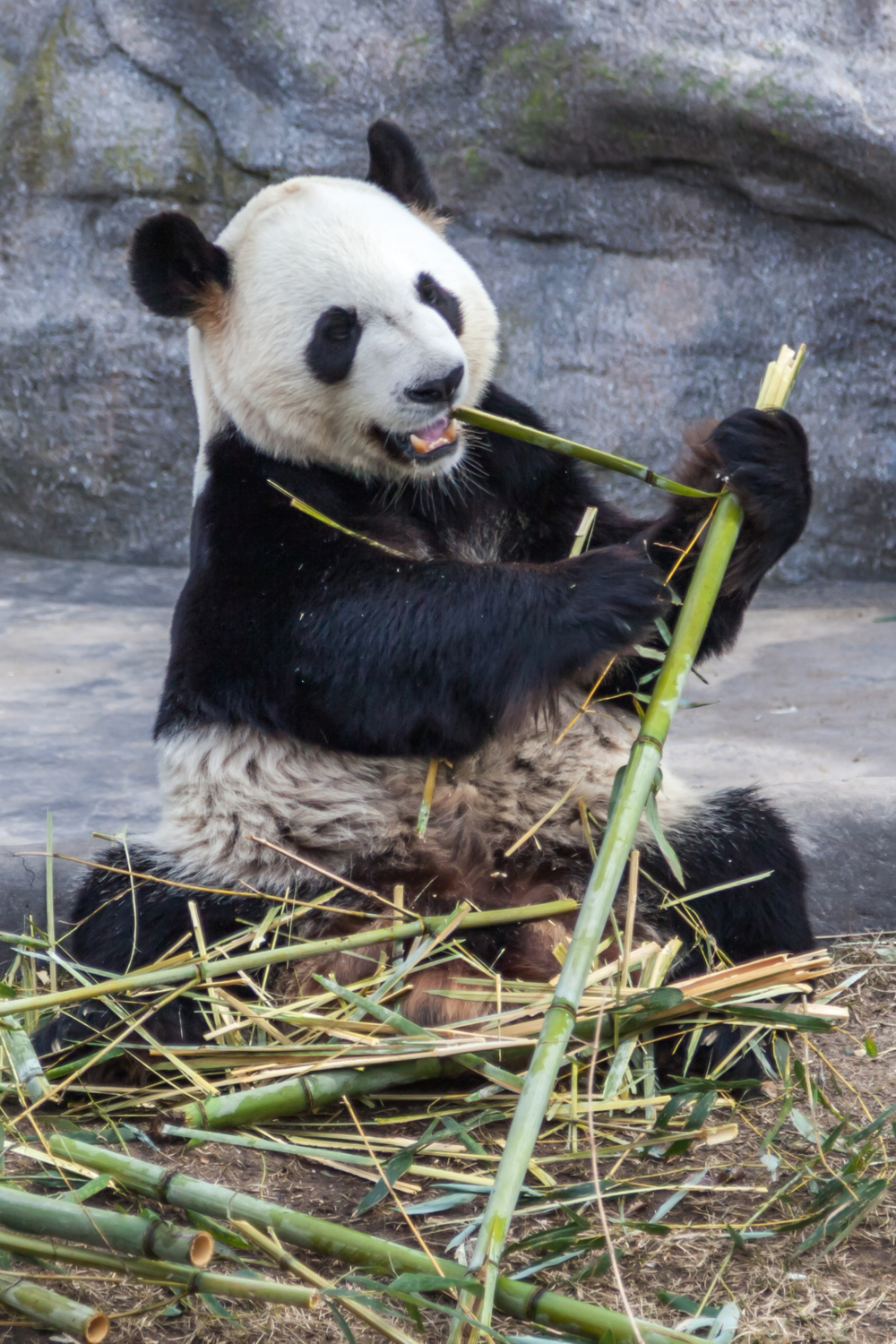 To work out what was going on, researchers tagged some pandas and followed them around to see where they were traveling, what they were eating – and also what came out of the other end in large quantities.

One of the most significant findings came from analyzing the pandas’ poop.

By comparing the ratios of protein and fat in the droppings with the ratios found in bamboo, the scientists were able to work out that the animals were extracting a high proportion of protein from the bamboo.

This told them that almost half of the pandas’ calorie intake, around 48%, came from protein, while the other 52% came from fat and carbs.

The results were striking because, nutritionally speaking, this is much closer to what you would expect from carnivores rather than plant-eating animals.

This means that while pandas live almost exclusively on vegetation, nutritionally, their diet resembles that of a true carnivore – so in a way, bamboo has become a kind of “fake meat” for pandas.

Why did they switch? 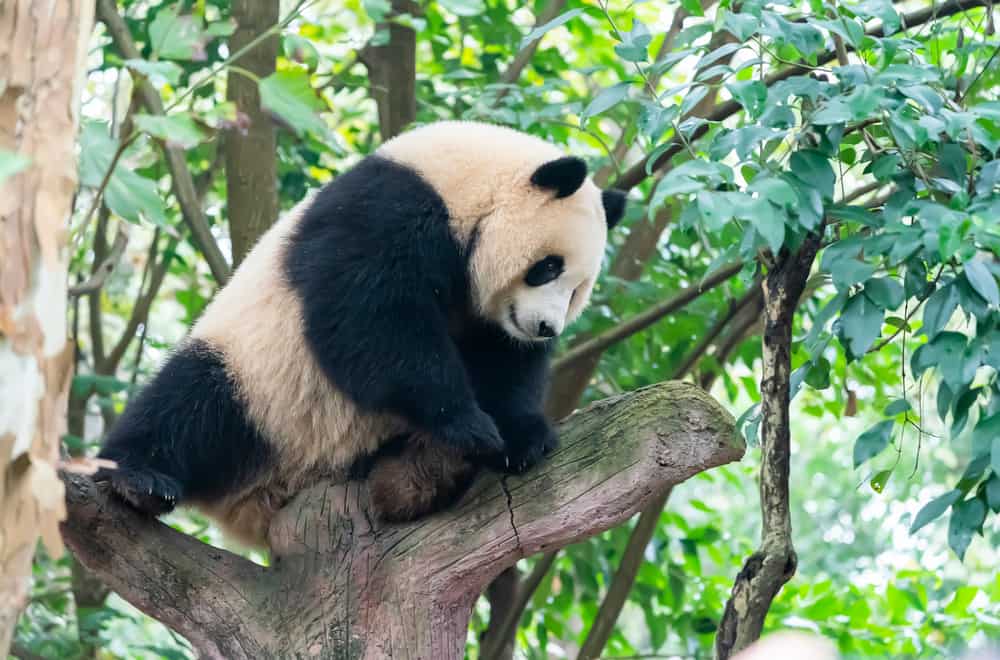 This all begs the question, why did pandas switch to eating bamboo when their bodies are more suited to a carnivorous or omnivorous diet?

The answer probably has to do with the abundance of bamboo in the areas where they live.

It is thought that pandas have been bamboo-eaters for around 2-2.4 million years.

We know that genetically, they lost the ability to taste umami at about the same time they switched to a plant-based diet.

The gene that allows animals (including humans) to taste umami flavors is associated with meat-eating, and in pandas, it became deactivated around when they started eating bamboo.

One theory posits that by switching to an abundant food source that few other animals chose to eat, pandas were able to guarantee themselves limitless meals that were always available and that they didn’t need to fight for.

And once the change occurred, there was no going back.

A panda’s life – a continuous search for protein-rich bamboo

The scientists studying the pandas’ diet and behavior also revealed other secrets about their behavior, and unsurprisingly, pandas’ lives are driven by the constant quest to find more food.

The pandas in the study were part of a population of animals living in the Qinling mountains in China’s Sichuan province.

It was found that during the months from April to August, the pandas remained at lower elevations, feeding on a species of bamboo known as Baschania fargesii.

At the start of this phase, they made do with the leaves, but once the shoots began to appear, they switched to voraciously devouring those instead. The shoots contain a higher protein content, so this fits with what you’d expect from the result of the poo analysis.

As the shoots grow, however, the protein content becomes diminished as the proportion of fiber increases, so when this food source became less appealing, the pandas would move up the mountains in search of a different bamboo species, Fargesia qinlingensis.

They would then proceed to consume these shoots, after which, they did their best to subsist on the leaves during the winter until they could come down from the mountain the following April to begin the cycle again.

Their behavior clearly shows the pandas following the growth of different species of bamboo and deliberately seeking out the parts of the plant that gave them the highest yield of protein.

This is further evidence of pandas obtaining their energy from a diet that is nutritionally much closer to that of a carnivore, even though in practice, they eat almost nothing but plants.

Are there any downsides to living on bamboo? 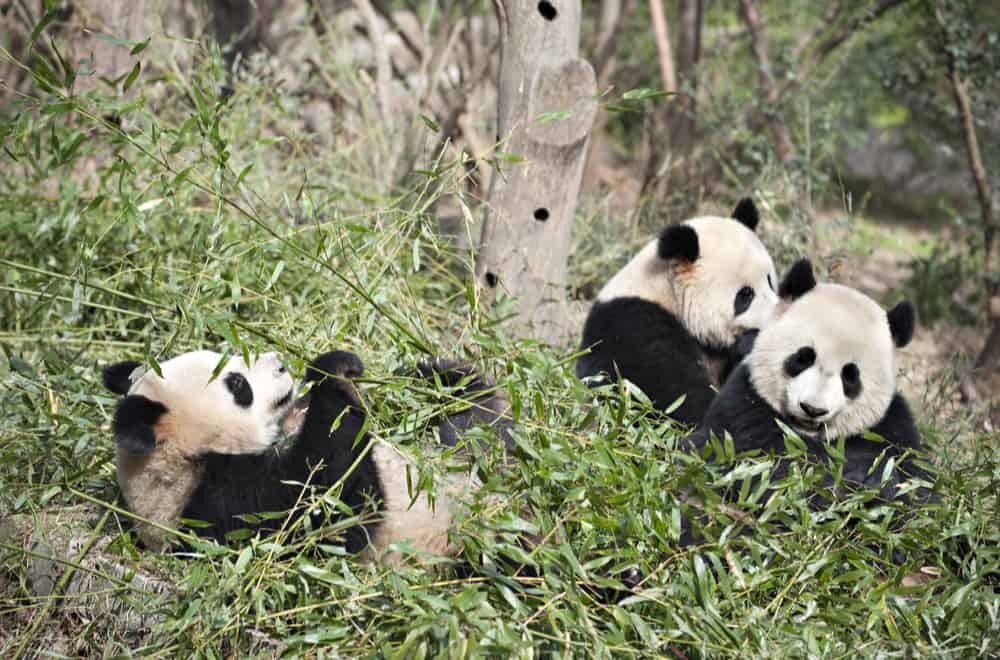 Making the change to a bamboo diet didn’t leave our furry friends in some kind of perfect panda utopia since living almost exclusively on this one food source also has plenty of drawbacks.

As we’ve said, bamboo is rather short on nutrients, so to obtain all the protein they need from it, they have to eat a whole lot of the stuff – which is why pandas spend practically their whole waking lives munching it down.

Although they receive the same proportion of their calories from protein as true carnivores, it’s far more efficient to get that protein by eating a prey animal than it is to receive it from bamboo, so to obtain the required amounts, they have to consume prodigious amounts.

Since they struggle to obtain all the nutrients they require, even when they spend most of the day gorging on their favorite food, female pandas also have few spare nutrients available for bearing young.

As a result, panda babies are born after one of the shortest gestation periods of any bear. Most of their cousins give birth after a pregnancy of around six months, but pandas give birth after only around two or three.

A darker and more macabre consequence of this is that mother pandas know they don’t have the nutrients to feed two babies, so if twins are born, she will only keep the stronger one, abandoning the weaker one to die.

Another effect of living almost entirely on bamboo is that, unlike other bears, pandas can’t build up the fat reserves required for hibernation and instead must keep feeding throughout the winter, surviving in any way they can.

Winter is a hard time for pandas because bamboo becomes more scarce and even less nutritious.

The result is that most panda deaths occur at the end of winter, the hardest time of year for the animals.

For example, one team of researchers recorded that of 25 cases of panda deaths or illnesses over a 37-year period, more than half of them occurred during March and April. So as you can see, life is not all fun and games for the gentle bamboo eaters by any means. 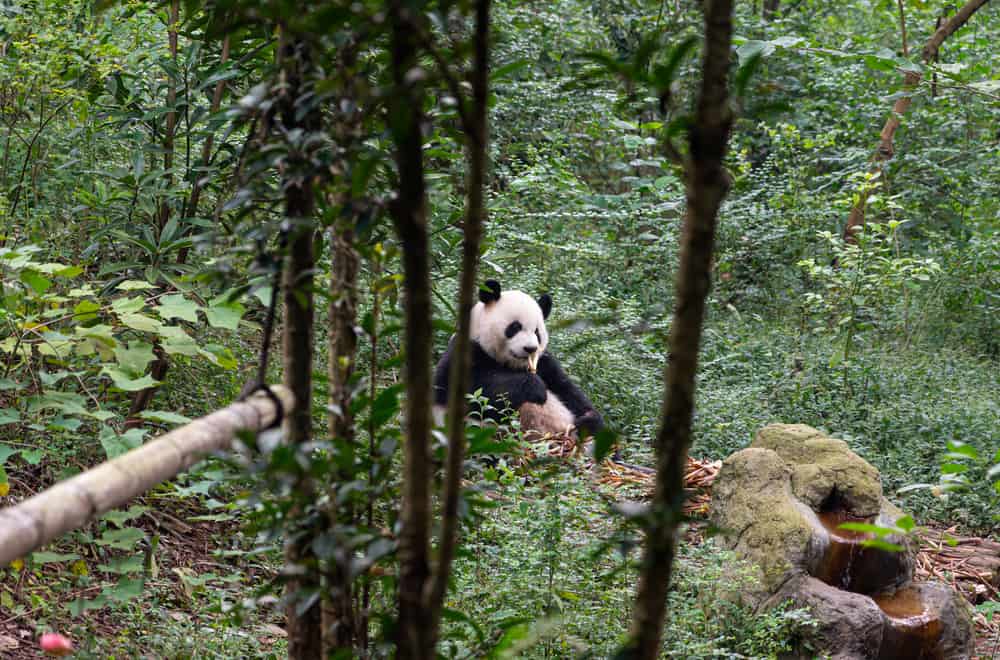 There’s also one other major downside of living almost exclusively on a bamboo diet, and it’s one that almost drove pandas to extinction.

Since pandas live on such a restrictive diet, they depend on that food being readily available, so when their habitat is destroyed by humans, they find it impossible to adapt and simply die off.

And this is exactly what happened in the past.

Nowadays, almost everyone knows that pandas are native to China, and most people probably also know that their current range is mostly located in Sichuan province where their favorite bamboo is still abundant.

However, in the past, their range was more extensive, and they could be found roaming in parts of Myanmar, through southern China and as far as Vietnam.

Unfortunately, due to habitat loss – as well as hunting for their furs – their numbers plummeted to the point where they were on the brink of being lost forever.

Although conservation efforts have allowed their numbers to rebound somewhat in recent years, it is thought that at one point the number of giant pandas in the wild fell well below around only 1000 animals.

Thankfully, numbers are rising again now, and as long as people do what they can to preserve the pandas and the bamboo forests they inhabit, it looks like the panda has been brought back from the brink.

Inspiration for human vegans or an “evolutionary mistake”?

Some people think the panda’s switch to a plant-based diet despite its meat-eating physiology can serve as an inspiration for humans hoping to go vegan – while others consider them an “evolutionary mistake” that was well on the way to extinction before humans got involved.

In any case, pandas are among the most adorable and well-loved animals we have, and through conservation efforts, it looks like they’re here to stay. So happily, we can all look forward to watching pandas chomping away on their favorite food for many years to come.