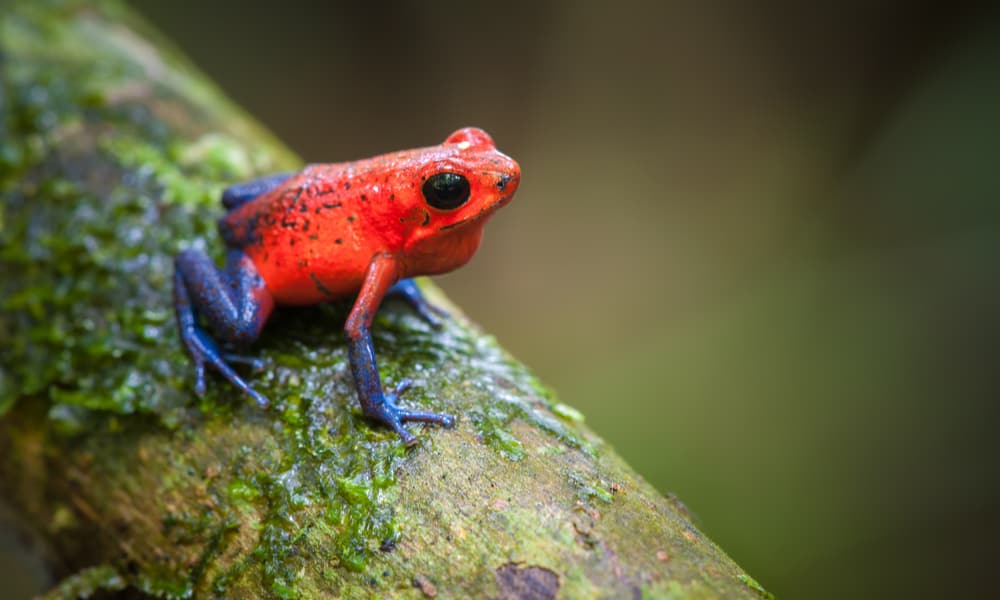 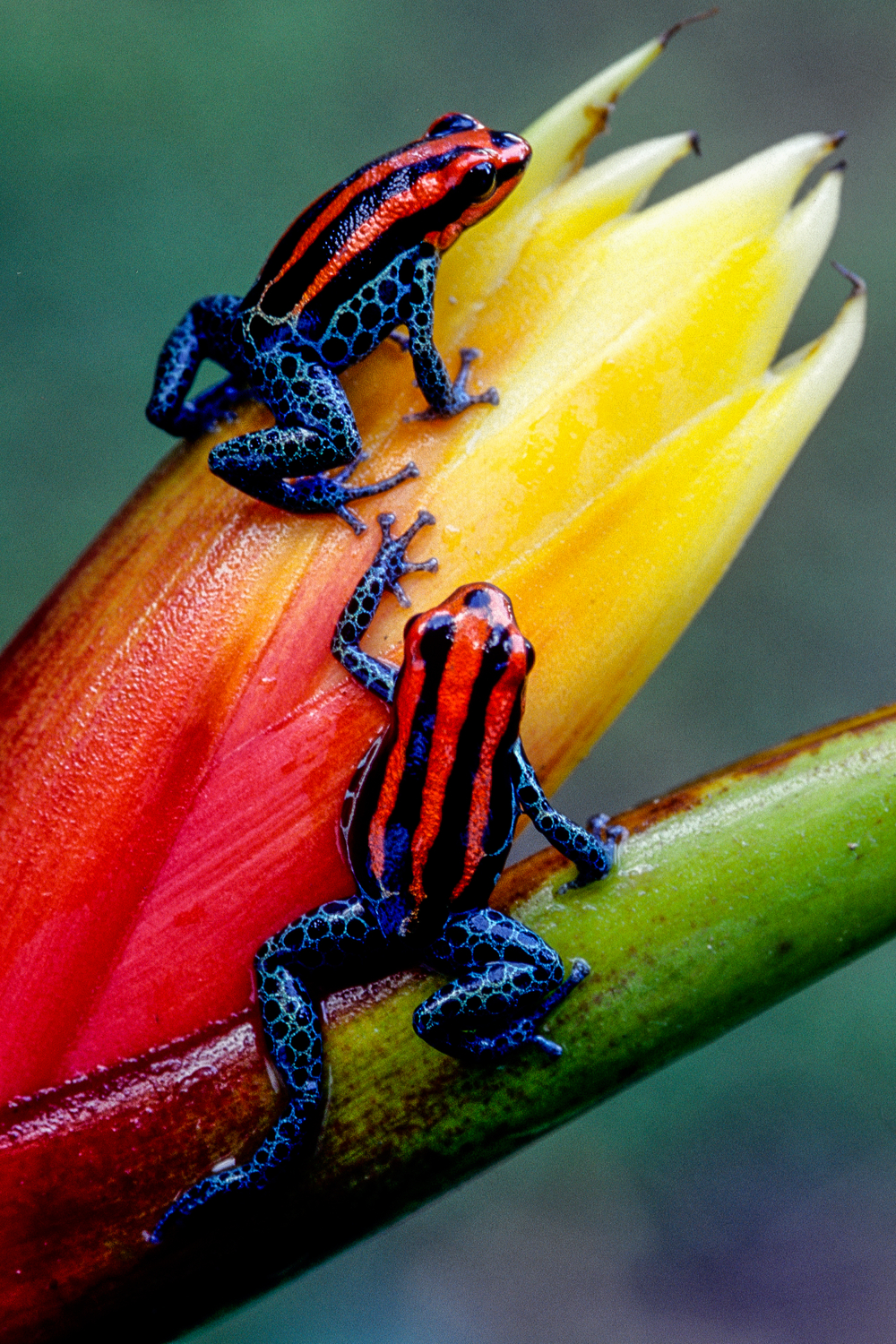 Poison dart frogs have various colors such as red, green, orange, yellow, blue. Like with many poisonous species, these colors signify that the animal is highly toxic. One frog has enough poison to kill 20,000 mice, which is why even larger predators are scared of it.

According to experts, the secret behind this toxin lies in the frog’s diet. They eat various insects, termites, crickets, and beetles, thus increasing their toxicity levels as they grow up. You can find them in the rainforests of Central and South America. Due to its unique skin, the frog is the main attraction in various zoos worldwide.

These frogs spend a lot of time in the water. As such, a humid tropical climate is ideal for them. Although they are mostly on the floor level, they can climb the trees. Unfortunately, while this is their ideal habitat, more and more frogs are spotted outside the rainforests due to deforestation.

Here are some of the habits that are common for this species:

What do poison dart frogs eat in the wild? 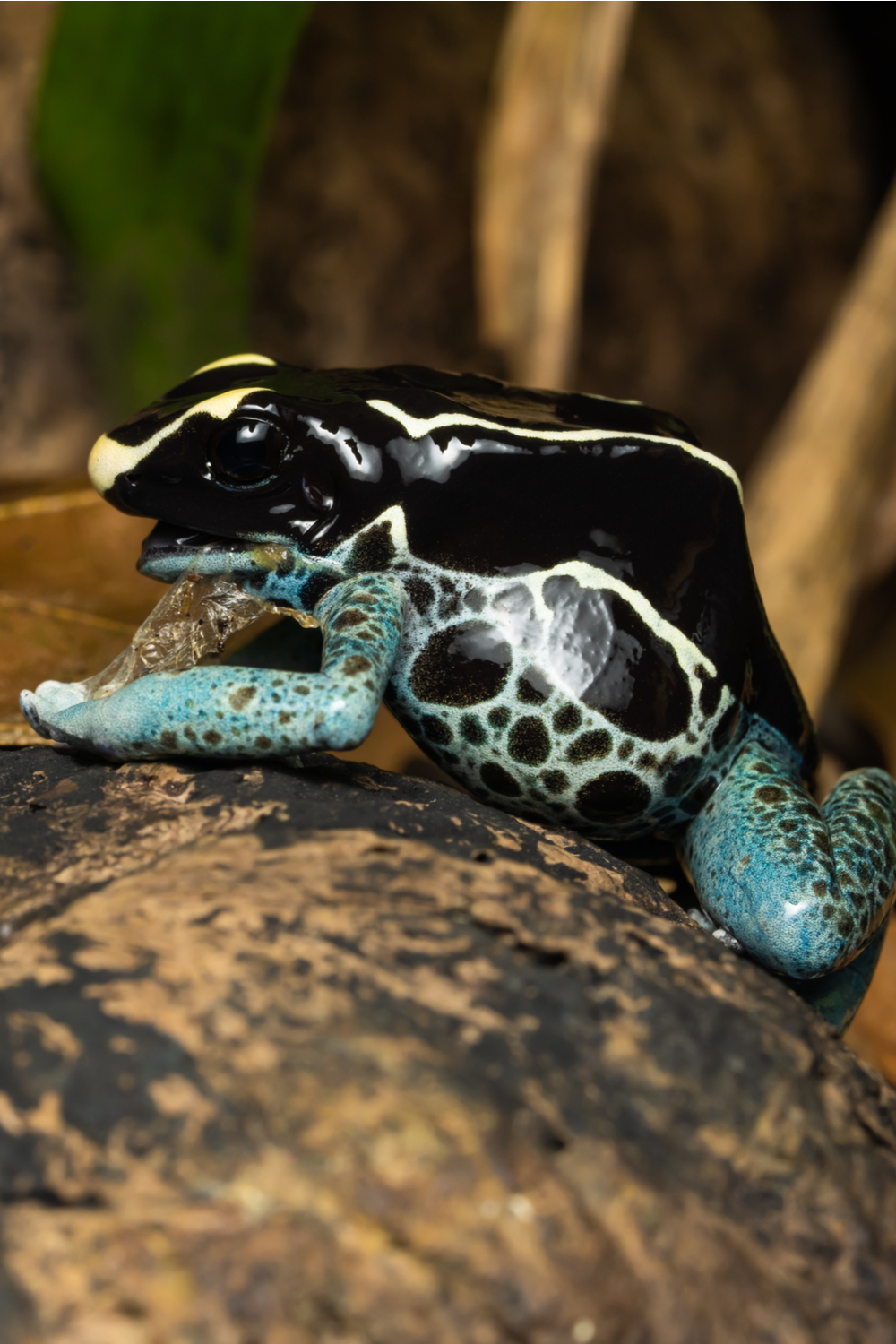 Poison frogs are carnivorous species that hunt during the day. They are extremely opportunistic, using their sticky, long tongues to grab faster prey. They mostly focus on smaller insects with a soft exoskeleton. But they can also eat harder species such as beetles. Out of all the insects, they prefer crickets and fruit flies.

As mentioned, the reason why these frogs became poisonous is because of the food that they’re eating. Over thousands of years, the poison dart frogs have fed on various toxic species, which led to the development of unique traits. Interestingly enough, if they start eating non-toxic insects, they slowly lose their toxic potential.

When talking about tadpoles, they are mostly omnivorous. They will eat everything they can find while swimming in the water. This includes detritus, algae, dead insects, insect larvae, and so on.

Here are the main things that poison dart frogs eat in the wild:

Poison dart frogs always go with insects that are small enough for their mouth. For example, larger crickets can become a problem as they grow up quickly.

Besides protein, the animal needs a lot of vitamins and calcium. They can get a lot of protein from almost any type of insect. Calcium is important for various internal processes, and the same goes for vitamins. They also rely on various other nutrients, especially during reproduction.

As they can only eat smaller insects, an average frog will have to consume a lot of them to feel satiated. If we’re talking about juvenile frogs, they can eat up to 30 fruit flies each day. That is if they can catch them. As they grow a bit, their needs increase significantly.

A young adult frog can consume up to 75 flies every day. The good thing is that they don’t have to eat every day so, if they manage to hunt enough insects in a day or two, they won’t have to eat for several following days. A frog can survive several weeks without any food if they have a full belly.

There are so many interesting things about these beautiful animals. Here are some fun facts regarding poison dart frogs:

Poison dart frogs are among the most toxic being on the planet. Their toxicity comes from the food they eat, and once a frog changes its diet, it will slowly lose this characteristic.

The frog is mostly active during the day because this is when its color is visible to predators. Both parents take care of the young ones. While poison dart frogs are highly sociable, they can also be very territorial.