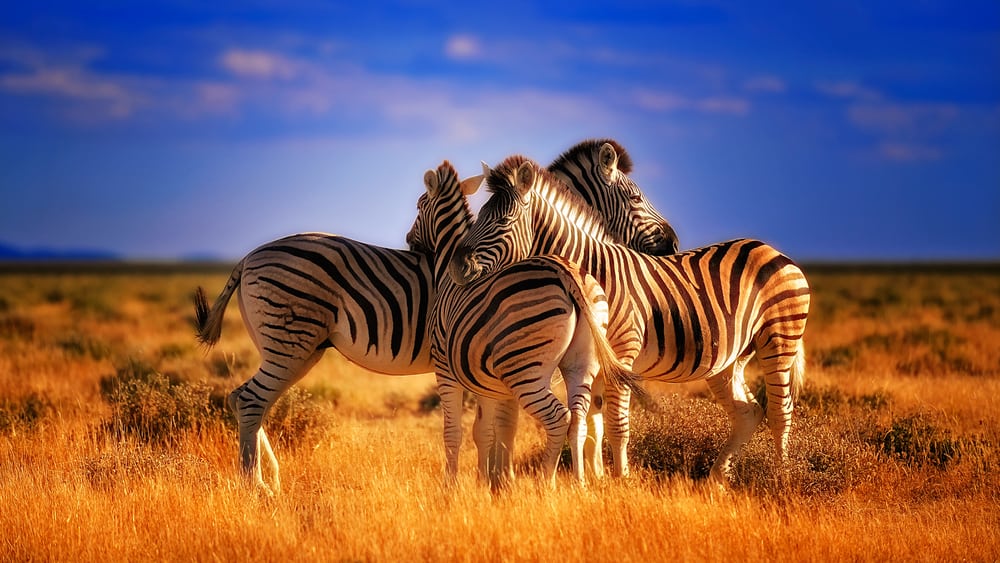 Do you love wearing animal prints? Which one is your favorite? If I had to choose, I would probably choose zebra print, as I think zebras look pretty cool with their black and white stripes.

Apart from their unique appearance, zebras are quite interesting animals. They are a popular tourist attraction, but they are also a significant part of food chains on African steppes. To learn more about Zebras, where they live, and what they eat, keep reading this article!

Zebras naturally live in Africa, and they belong to the same genus as horses and donkeys. They can be found in eastern and southern Africa, in countries such as Kenya, Tanzania, Angola, South Africa, Namibia, Zambia, Botswana, Malawi, Zimbabwe, Ethiopia, and Uganda.

When it comes to their appearance, zebras look like striped hybrids of horses and donkeys. Each individual has unique stripes, but the exact purpose of these stripes remains unknown. However, one theory suggests that stripes serve as a deterrent against flies.

Zebras don’t actually have both white and black stripes, their fur is black and covered with white stripes. The zebras’ bellies are typically white. Zebras have large and hairy ears and strong legs that end in singular, hard hooves.

Since zebras live either in harems or large herds, the females will mate with stallions when they enter their estrous cycle. Once they become pregnant, they will carry their foal for approximately one year.

A newborn zebra foal is capable of walking and running within one hour after birth. It will follow anything that moves, so its mother will keep other mares away until the foal learns how to recognize its mother.

Baby zebras foals are also born with stripes, but their fur is reddish-brown, and it turns black as they grow. Since young foals are quite vulnerable to predator attacks, the whole group will try to protect them.

Zebras have locking joints in their legs, which means they can fall asleep standing, without having to worry about losing their balance and falling. This is extremely useful when they are ambushed by predators and need to start running as soon as possible. However, zebras still need to lie down if they want to enjoy deep sleep.

Sadly, zebras are currently endangered due to various reasons. The first of them is excessive hunting by humans, but some other reasons include changes of habitats, lack of food sources, and inbreeding due to small subpopulation sizes.

Zebras have been a part of African culture for millennia, and many cave paintings depict zebras in their everyday lives. There are also many myths about how zebras got their stripes, one of them claiming they got scorched by fire.

From the dawn of human civilization up until today, zebras inspired numerous artists, and they are also mascots for various products and advertisements. In some countries, crosswalks are called “zebra crossings” because they are marked with white stripes like zebras.

Today, there are only three species of zebras:

Apart from these living species, fossil records speak about the existence of more species, with some of them even inhabiting Europe and Asia.

What Do Zebras Eat?

Zebras are herbivores that spend most of their days grazing on grasses, but they will occasionally browse on bushes and trees. They use their strong front teeth to clip off their food, and they crush and chew it with their back teeth. This wears the zebra’s teeth eventually, so they don’t stop growing at all.

What Do Zebras Eat In The Wild?

However, this means zebras feed primarily on foods with little nutritive value, so they need to eat a lot to make up for it. Zebras will spend up to 18 hours per day eating and chewing their food.

What Do Zebras Eat In Captivity?

While wild zebras spend most of their days eating or looking for food, zebras in captivity or in zoos will eat only once a day because they don’t have to search for food as they are fed with sufficient amounts of food.

They are usually fed alfalfa, hay, and special pellets that contain necessary vitamins and minerals. As a treat, zebras are sometimes fed apples and carrots. Also, sometimes they are given a salt lick, which is basically a block of salt given to zebras to lick.

In the wild, zebras will get all the necessary salt from the grass they graze, but in captivity, they need salt lick to get all the salt they require.

Baby zebras mostly feed on their mother’s milk for approximately 1 year, but they will start to graze on soft grasses shortly after birth. Since their digestive systems are still underdeveloped, zebra foals need to occasionally eat adult zebra dung to acquire beneficial gut bacteria.

Where Do Zebras Forage Their Food and Water?

Plains zebras follow water sources and clouds to find tall grasses on which they will feed. Mountain zabras will feed on branches and twigs when there is not enough grass, and they will dig for water with their hooves. Grevy’s zebras usually have a semi-permanent residence near a body of water, where they graze on grasses, mate, and live.

What Are The Predators Of Zebras?

Since zebras need to go through seasonal migrations to survive, they are often left vulnerable to the attacks of various predators. Young foals, old, sick, or wounded zebras are the most vulnerable.

Some of the most common zebra predators are lions, cheetahs, leopards, hyenas, and crocodiles. Zebras will put up a fight when faced with their predator. They will bite and kick with their strong legs. They also have excellent hearing and eyesight, which can help them notice the predator and run away.

Humans also proved to be dangerous zebra predators, as they drove several zebra subspecies to extinction or near-extinction.

Are Zebras Dangerous For Humans?

Zebras are far more aggressive than they look. With that in mind, it is safe to say they are not human-friendly, which is probably a logical explanation of why they haven’t been domesticated while their cousins, horses and donkeys, live alongside humans for millennia.

When people approach them, zebras will either flee, bite, fight, or kick. They won’t attack you first but will become aggressive if they feel threatened.

How To Feed Zebras

Zebras in captivity should have similar diets as their wild counterparts as much as possible. This means they should be fed with grass, leaves, hay, twigs, saplings, etc.

However, keep in mind that zebras naturally feed on plants with little nutritional and caloric value, so make sure that you don’t overfeed them or they can become obese.

Also, when visiting zebras in zoos, abstain from feeding them at all because chances are, those zebras are already eating too much. Also, zoo zebras are probably eating plants with more nutrients than they actually need.

With their distinct stripes, zebras are certainly one of the most recognizable animals. They are one of the most popular zoo attractions, and their fur was highly valued for many centuries. Zebras have an iconic appearance that made them into mascots and symbols for many ideas, products, etc.

Zebras have a specific diet because they intentionally feed on tall grasses that don’t have many calories or nutritional value. These grasses make up 90% of the zebra’s diet, and the remaining 10% are leaves, branches, twigs, saplings, bushes, etc.

Have you ever seen zebra in person? If yes, do you have any interesting stories to share, or maybe some fun facts? Feel free to write in the comments!