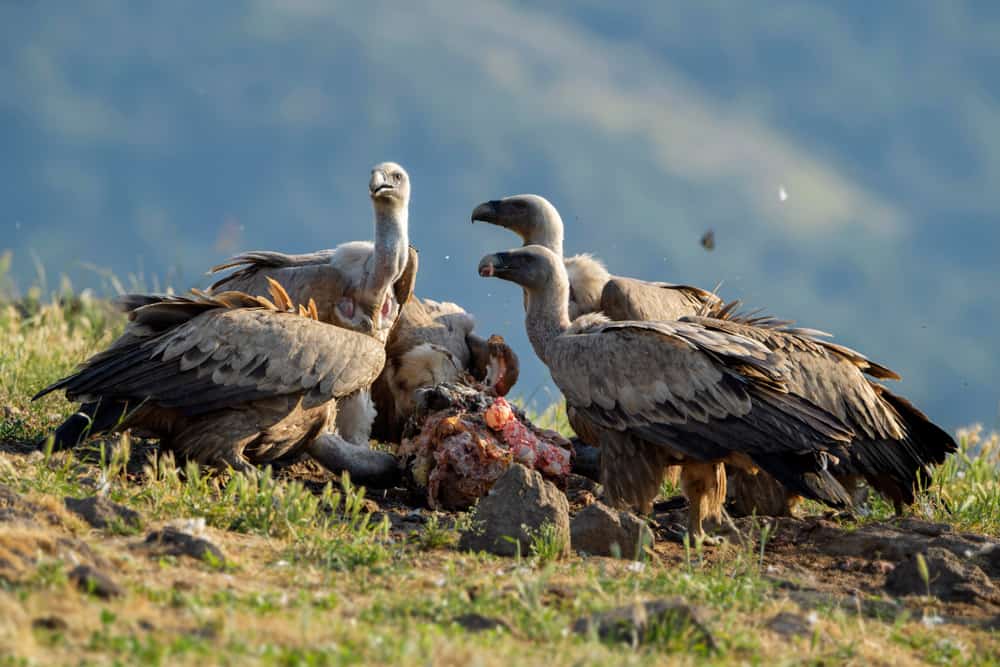 When you think about birds, chances are that the cute creatures flying around in the sky are the first thing that come to mind. You’re probably not thinking about the large carcass-eating type of bird known as the vulture.

While vultures may not be the cute and cuddly birds that you want to ever confront, there are many ways they play a beneficial role in nature. Vultures are complex creatures and there is so much that you probably don’t even know about them. We’ll uncover just a few fun facts about vultures below.

Oftentimes, vultures carry negative connotations and are closely associated with death. Why is this? Continue reading to get the answers to all your questions, including, “What do vultures eat?” and even more.

Before we get into the deep details about vultures, let’s first answer the simple question: What are vultures? The answer is a little more complicated than you may think.

Found in every continent with the exception of Australia and Antarctica, vultures are large birds most known for their featherless heads and savage-like behavior. These birds live in the tropics and subtropics and are characterized by their near-perfect eyesight and their ability to soar seamlessly through the skies.

Vultures are classified into two different groups: Old World vultures and New World vultures. These two groups are not closely related to each other, and they do have some key differences when it comes to appearance, behavior, and characteristics.

Mainly found in Africa, Asia, and Europe, there are 15 species of Old World vultures that include eagles, buzzards, and hawks. These types of vultures rely on their sight to help them find their next carcass meal.

Old World Vultures are widely considered to be the largest bird of prey, measuring 3.3 feet long, 27.5 pounds, and with a wingspan of about 8.9 feet. You can tell an Old World vulture from a New World vulture by its broad wings and short tail.

New world vultures, on the other hand, live in habitats across the Americas region in warmer climate. Unusual for birds of its kind, these types of vultures rely on their sense of smell to guide them.

All New World vultures have bald heads and necks to keep themselves clean while they’re eating, prevent any feathers getting in the way. This biological adaptation prevents their feathers from becoming matted with blood, guts, or flesh when they reach into an animal carcass.

While Old World vultures have strong talons, New World vultures differ in that their weak, flat feet are not made for grasping onto things properly. But because they rarely feed on live prey, it is not necessary for them to grasp using their talons. Instead, they feed in one place and do not have a need to carry their prey to other locations.

What Do Vultures Eat?

Vultures are scavengers and predators that primarily feed on the carcasses of dead animals, which are also called carrion. Given their feeding habits, vultures are sometimes referred to as “nature’s clean-up crew.” In fact, vultures play a vital role in the balance of nature by removing dead carcasses from the area.

If left sitting for long enough, carcasses can become a host for bacteria and even diseases. Vultures help mitigate this risk by eating the carcasses and getting them out of the environment.

One interesting act about the way vultures eat is that although carcasses can carry bacteria, vultures are made for consuming these dead animals. Their acidic stomachs have strong enzymes that kill off harmful toxins and make it relatively harmless for them to eat their meals.

What Do Baby Vultures Eat?

Like many young animals, baby vultures, called chicks, must rely on their parents to provide nourishment for them. However, because adult vultures do not have strong talons, it is difficult for them to carry prey back to their chicks to eat. Instead, they feed their baby vultures by regurgitating bone chips to them.

As the adult vultures feed on the carcass, they save bits of the bone chips in their mouths to bring back home to their chicks. By eating bone chips, vultures are being nourished with vitamin D and calcium that keeps their own bones strong, helping them to fly. As the chicks grow older, adult vultures eventually bring back bigger pieces of bones for them to eat.

How Much Do Vultures Eat? 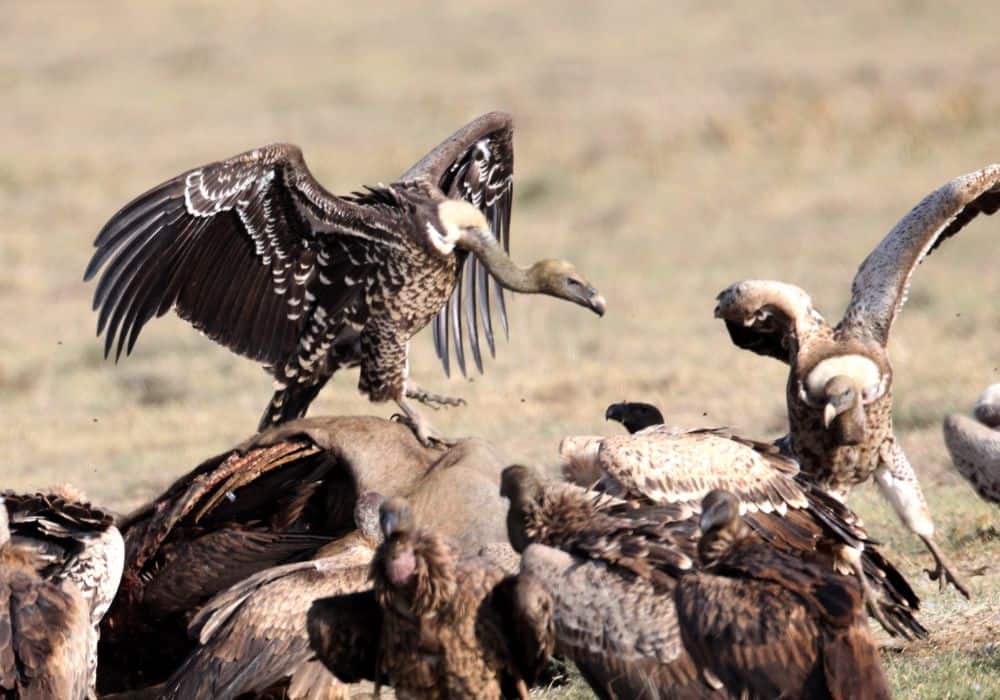 Vultures are very efficient when they eat, sometimes taking less than half an hour to completely pick apart the body of a small animal. In just one minute, a vulture can consume over two pounds of meat.

Even though they are birds of prey, the different vulture species rarely kill other animals. Instead, they hunt for dead or nearly dying animals that they can prey on.

One of the only times that these birds will attack live prey is if the animal is very sick or wounded. Although this is more likely to happen if there are no carcasses in the nearby area.

How Do Vultures Hunt? 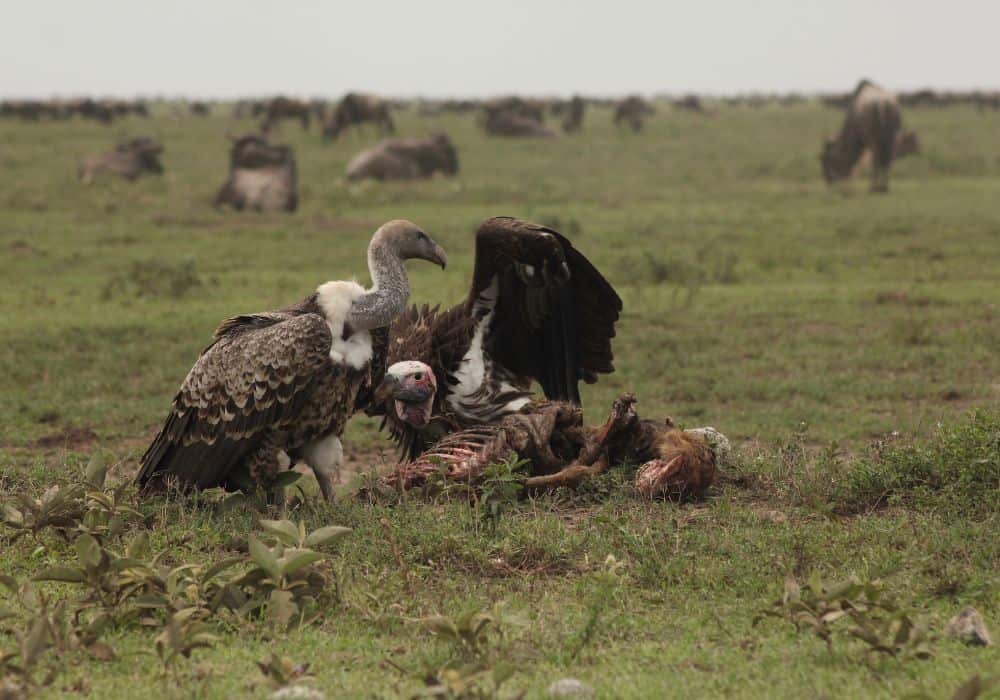 Vultures have long hook-like beaks that function by tearing pieces of food. They eat by inserting their entire head inside of the animal carcass.

Their keen eyesight plays an important role in hunting. Vultures have such sharp eyesight, that they can spot a three-foot carcass from nearly four miles away. Once they spot the carcass, vultures fly in circles above it, signaling to other vultures that a fresh meal is nearby.

Are you still curious to learn more about vultures? Check out our frequently asked questions (FAQs) for everything you need to know about this complex bird species.

While most vultures are carnivores and scavengers that feed on carrion, some species of vultures hunt smaller prey, including lizards, rodents, and insects.

Specifically, black vultures are a bit bolder in their hunting approach and many have resorted to preying on live animals, such as calves, lambs, and piglets. Even then, most vultures will just prey on live animals that are sick or dying, like stillborn calves for example.

In areas like Indiana, farmers have been taking a stand in the hopes of stopping these predatory birds from harming their livestock. Many farmers have even sought permits allowing them to kill any black vultures looking to harm their cattle. However, because vultures are protected under the Migratory Bird Treaty Act of 1918, there are restrictions on the number of vultures that farmers can kill.

Do vultures eat fruit and vegetables?

Although they mainly prefer feeding on freshly dead animals, some vultures, such as turkey vultures, will sometimes eat fruits and vegetables, including pumpkins, coconuts, juniper berries, and grapes.

Like turkey vultures, black vultures will also sometimes eat fresh or rotten fruits, as well as other plant-based foods such as vegetables.

When food supplies are low, they will sometimes resort to eating food from dumpsters. This is more common in areas like Central and South America, especially when there might not be many carcasses around to feast on. 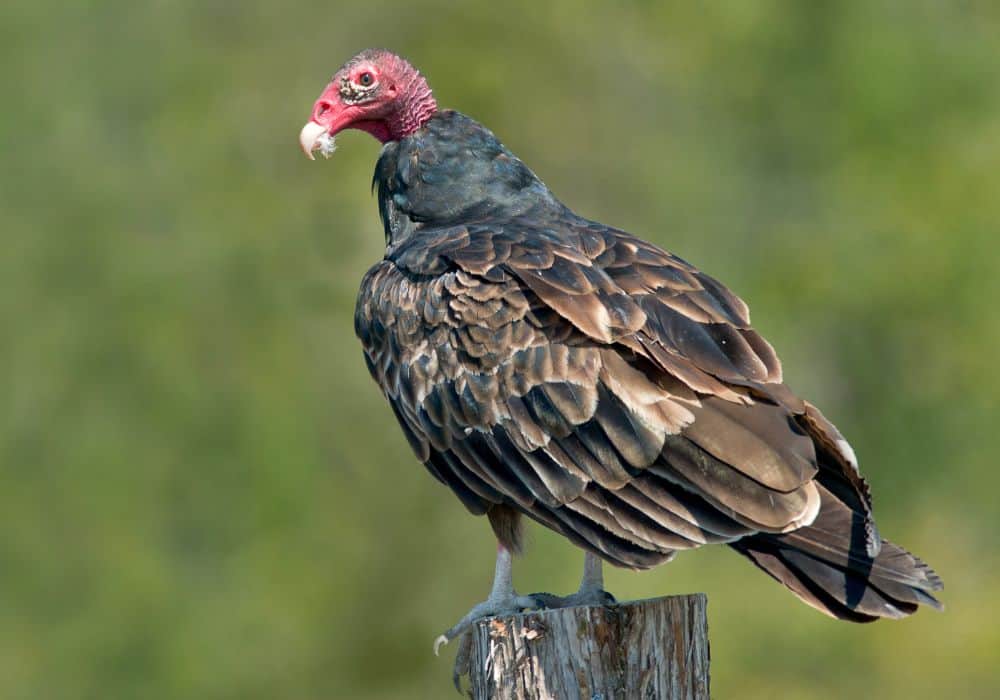 Although they look scary and intimidating, vultures do not pose a major threat to humans. In fact, they’re relatively harmless for humans due to their weak legs and blunt talons. They are not made for hunting animals and would do much less to humans as a result.

As previously mentioned, vultures feed on dead animals and have no actual reason to attack humans. If threatened, however, some vultures will use projectile vomit as a way to defend themselves. This is about as aggressive as they may get when it comes to attacking humans.

What does it mean when vultures circle your house?

As many people know, vultures carry such negative connotations. In fact, they are most closely associated with death. But you don’t need to worry if you see vultures circling your house. This isn’t necessarily a bad premonition, and it doesn’t mean that something bad will happen to you in the near future.

Vultures can smell their prey, which are dead animal carcasses, from up to one mile away. So, if you find a group of vultures circling around your home, then chances are there might be a dead animal nearby. But don’t worry because the vultures will undoubtedly get rid of it for you.

Everything You Need to Know About Vultures

Although vultures have a bad reputation, they bring many benefits to the planet, such as keeping our land clean from dead animal carcasses.

So, next time you think of vultures in a negative way, just remember these fast facts about these interesting birds:

If you would like to know anything else about vultures, feel free to leave your questions in the comments section!