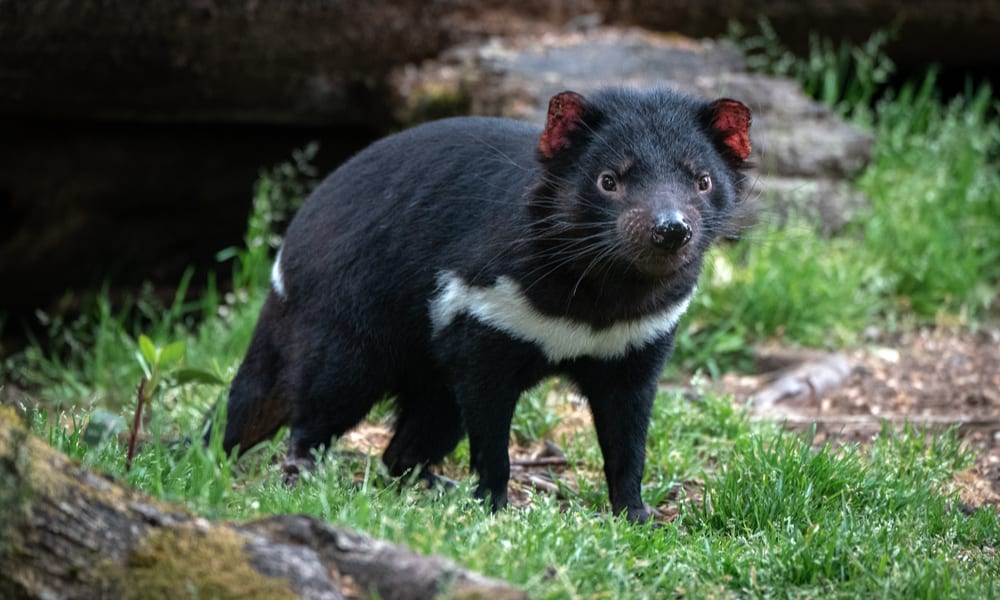 If you’ve watched Looney Tunes cartoons, then you must be familiar with the character Taz. Yes. Taz is a character based on an actual animal, the Tasmanian devil. You might mistake them for baby bears at first sight, but they are in no way related.

What do devils’ eat? You’ll have to read on to satisfy your curiosity.

The Tasmanian devil, Tasy, or simply devil, is a marsupial that was until recently found only found in the island state of Tasmania. Now, you can also find it in New South Wales and mainland Australia.

The devil is the size of a puppy dog and is the largest carnivorous marsupial (pouched animal) worldwide.

Despite Tasmanian devils being solitary animals, they often poop together in a common area/location.

Devils are primarily active in the middle of the day without overheating due to their capability to thermoregulate effectively.

Tasmanian devils are capable of surprising speed and endurance despite their chubby appearance. They can also swim across rivers and climb trees.

On their forefeet, devils have five long toes. Four of the devil’s toes point to the front, and one comes out from the side, giving the devil the ability to hold food. In contrast, their hind feet have four toes.

Males are typically larger than females, with a combined head and body length of 653 millimeters, a tail of 258 millimeters, and an average of 8 kilograms in weight.

Females have an average head and body length of 570 millimeters, a tail of 244 millimeters, and an average of 6 kilograms in weight. However, devils of western Tasmania are typically smaller.

Males are polygamous and will have more than one mating partner. They’ll fight each other for females and prevent them from infidelity.

Female devils will give birth to 20-30 live young ones after three weeks of gestation. Their young are pink in color and furless. They weigh about 0.20 grams at birth and stay in their mother’s pouches for a period not exceeding 100 days.

Females have only four nipples and, therefore, suckling young ones have to compete to feed. As a result, only a few newborns survive. Baby devils become independent after nine months. They become fully grown at two years and may live for up to five years in the wild.

What Do Tasmanian Devils Eat In The Wild? 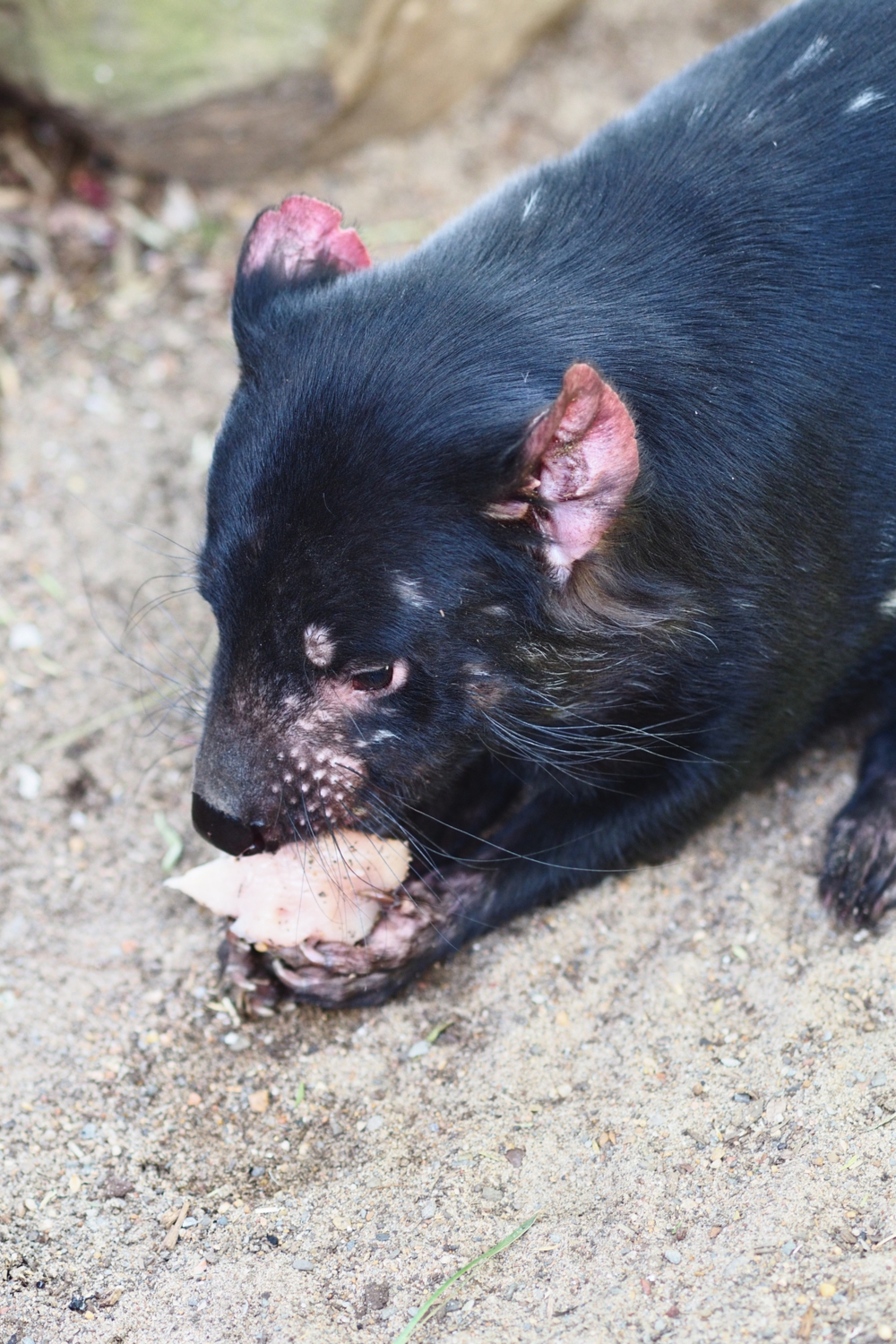 Tasmanian devils are keystone species in the Tasmanian ecosystem. They are primarily nocturnal hunters but are also crepuscular hunters. That is, they are active during the night and slightly before sundown (twilight).

Being carnivorous, they mainly feed on animal matter. Devils can take on preys up to the size of a small kangaroo. However, they are more opportunistic feeders and eat carrion (decaying animal flesh) more than hunt live prey.

Devils will forage on dead fish washed ashore and will also hunt water rats by the sea. Near human habitation, they feed on sheep’s legs that have slipped in shearing sheds (large sheds built to accommodate large-scale sheep shearing activities).

Tasmanian devils’ diets vary depending on the foods available. The following are the main foods that they eat:

Devils have powerful bites that can bite through metal traps. They usually reserve their powerful jaws for escaping captivity rather than breaking into food storage facilities.

Due to their lack of extreme speed, they cannot chase down prey like wallabies or rabbits. Instead, they target animals that have become slow due to illness.

Tasmanian devils use their keen sense of smell to sniff out sick prey from distances ranging between 10-15 meters away and attack.

Using their forefeet, devils will dig when foraging for corpses. They feed on animals’ dead bodies by first tearing their digestive system because it’s the softest flesh before eating the rest.

Devil’s will completely devour all traces of small-bodied carcasses, including the fur and bones. They have earned the nickname Tasmanian farmers because the speed at which they eat carcasses aids in preventing the spread of insects that might harm livestock.

According to studies carried out at Cradle Mountain in Tasmania, male and female diets vary substantially, especially with season changes.

During winter, males prefer medium-sized animals over larger ones, whereas they prefer larger prey in summer. Females are less likely to feed on larger prey.

Juvenile devils will climb trees to eat bird eggs and grub. They may even climb into nests to capture birds.

Devils mainly hunt alone, but there have been claims of group hunting, where they drive prey off its habitat before others join in the attack. 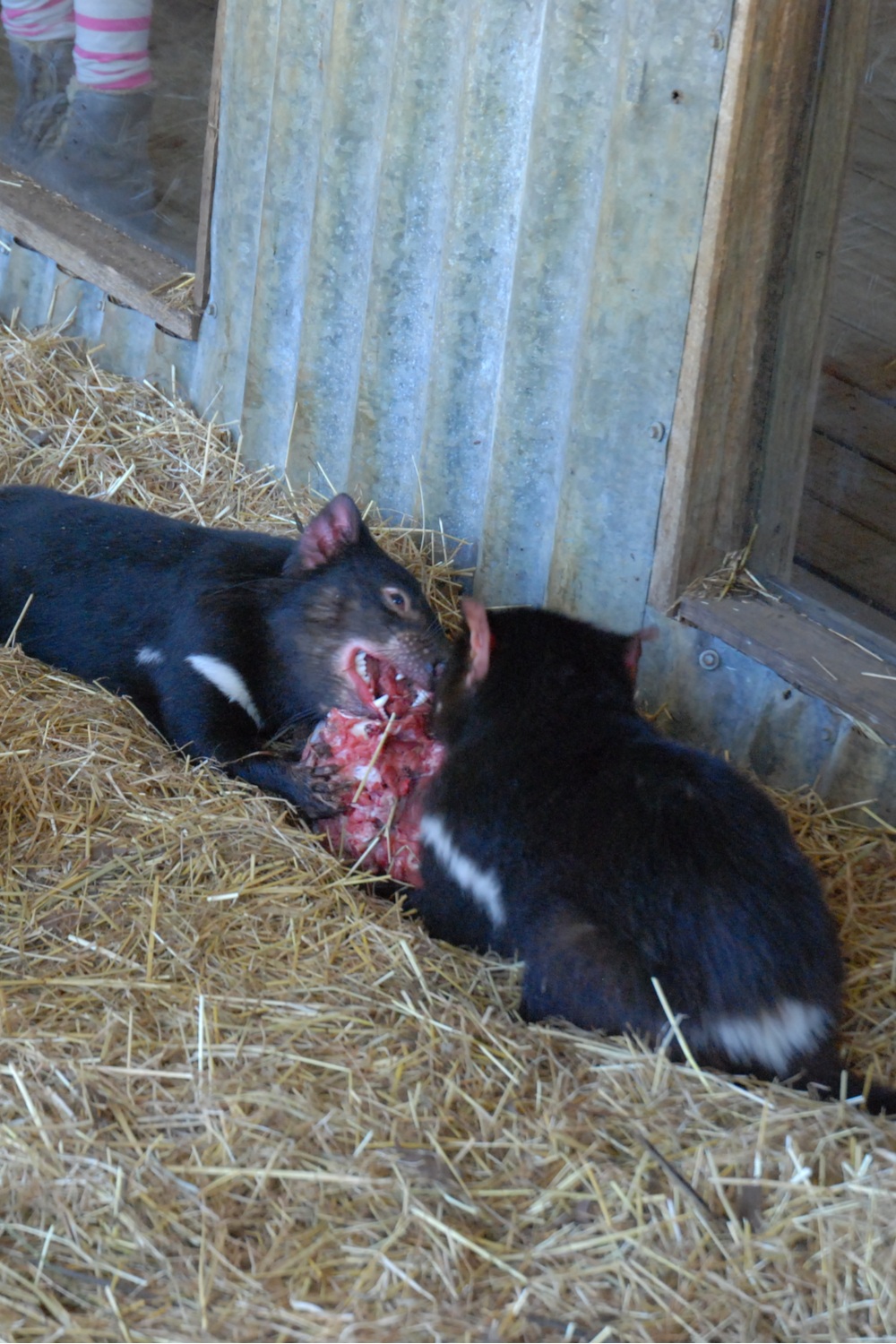 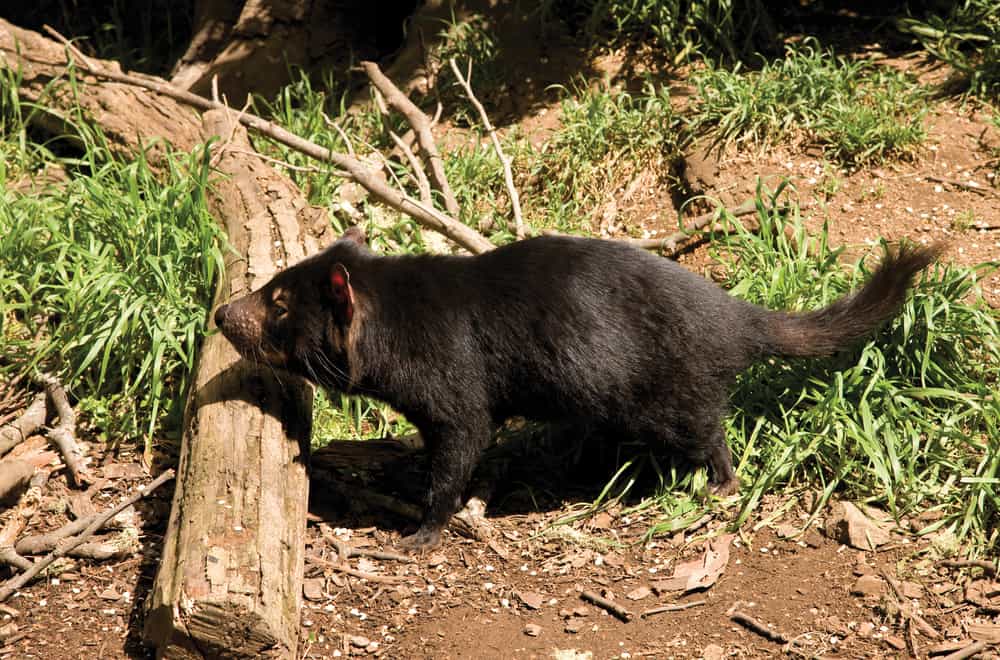 Which animals prey on Tasmanian devils?

Tasmanian devils face threats from other predators, such as foxes and wild dogs. Their most significant predator is the Tasmanian wedge-tailed eagle which competes for food with the devils.

Can you keep a Tasmanian devil as a pet?

No. Tasmanian devils thrive in the wild, where they roam around for miles in search of food. They are also solitary animals, meaning they prefer to be alone.

No, devils are incapable of killing humans. Despite their reputation for aggression, they try as much as possible to avoid interacting with humans. However, it might attack when backed to a corner, delivering a powerful bite that can cause serious injury.

Which predator would win between a Tasmanian devil and a wolverine?

In a one-on-one scenario, the wolverine would win the battle. Wolverines possess sheer ferocity and power. The devil might be able to land a solid bite or two, but it won’t be enough to win the brawl.

Tasmanian devils are crucial in maintaining the Tasmanian ecosystems. Despite their intimidating look, they are very shy and reserved creatures. Don’t be fooled by their small sizes because they can be ferocious when the need arises.

We hope this article on “what do Tasmanian devils eat” has been beneficial to you.