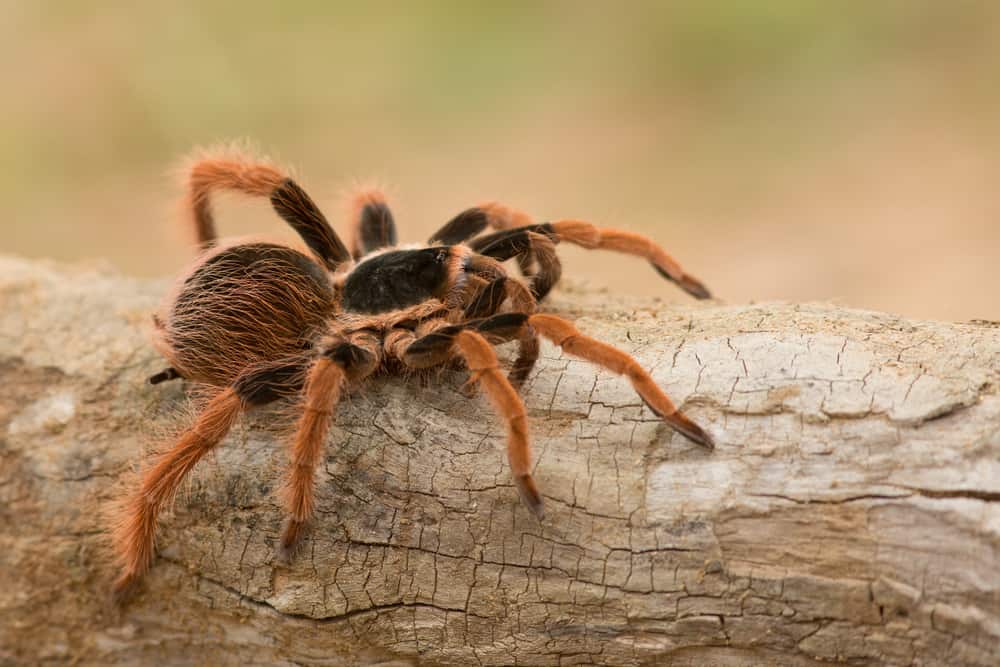 It is estimated that 3%-15% of all people have arachnophobia, irrational fear of spiders and other arachnids. So, you don’t have to think you are weird for feeling uncomfortable at the mere thought of spiders, there are many people like you, and your response is just another evolutionary mechanism that kept us safe for thousands of years.

Nevertheless, the days when we had to fear venomous spiders are long gone, and most people will never encounter a dangerous spider in their whole life. Still, living on the edge is in human nature, and many people will intentionally come in contact with spiders; some will even keep them as pets.

One of the most popular spider species that are kept as pets is the tarantula. This spider is a go-to option for those who want to own an unusual and potentially dangerous pet. However, taking care of tarantulas isn’t easy, and one should always learn some basics before getting a pet tarantula.

Tarantulas inhabit the United States, Mexico, Central America, South America, Asia, Africa, and even some South Europe countries. There are 1010 tarantula species that have been identified so far. Some of them live in the trees, while others prefer to reside near the ground.

The size of a tarantula may vary depending on the species, with the smallest ones being not much larger than BB pellets, while the larger specimens being as big as dinner plates. Most tarantulas are either brown or black, but some species are brightly colored or striped.

Tarantula’s body and legs are covered in dense hairs, also called urticating hairs. These hairs serve as a defense mechanism because they can irritate the skin and eyes of a possible predator. Tarantulas have eight eyes, but their vision is not so good. That’s why tarantulas rely on their sensitive hairs to orient themselves.

Tarantulas also have eight legs, with each leg divided into seven segments. Besides their four pairs of legs, tarantulas have two pairs of appendages, with one pair containing fangs and venom (chelicerae) while the other pair (pedipalps) is used for crushing food, and in some species, for mating.

Speaking of mating, tarantulas have an interesting mating ritual. They usually mate once a year. Male tarantulas weave a web mat on a flat surface. Then, they rub their abdomens against the mat and release their semen.

The semen gets absorbed by the tarantula’s pedipalps in order to preserve it before finding a female tarantula. When the male tarantula finds a receptive female of the same species, he will insert his semen into the lower part of her abdomen.

Once he transfers his semen, the male tarantula will quickly disappear because female tarantulas can get moody, hungry, and aggressive after mating. On some rare occasions, females will eat males after fertilization

Female tarantula will deposit 50 to 2000 eggs. Spider egg hatches after 6 to eight weeks, and baby tarantulas stay in their nest until they eat the remains of their yolk sacks.

What Do Tarantulas Eat?

Tarantulas are apex predators and nocturnal hunters that aren’t afraid of attacking several times larger prey. At the same time, they are opportunistic feeders, which means they will try and eat anything they can catch.

What Do Tarantulas Eat In the Wild?

How Does A Tarantula Hunt Its Prey?

Tarantulas ambush their prey and catch it with their strong fangs. Once it catches the prey, the tarantula will release its venom, which will paralyze it.

Tarantula’s venom is so strong it acts as a digestive enzyme and dissolves the prey’s meat, turning it into a liquid. Also, tarantulas have extremely strong jaws, which further help them to dissolve and eat their prey quickly.

Since their eyesight is not so good, tarantulas listen to vibrations in the ground to detect possible prey. They will bury themselves in dry soil and will line the walls of their burrows with silk so that they can better track possible prey.

Once the tarantula injects its prey with venom, it will suck in the liquified flesh. The flesh will go from the mouth into the tarantula’s stomach, lined with strong muscles. The stomach will contract, further breaking down the meat into small particles.

These particles will be absorbed into the bloodstream and distributed equally throughout the tarantula’s body. Tarantula will roll the rest of the prey’s carcass into a ball and discard it later.

Tarantulas in captivity have similar feeding habits to those living in the wild. They should eat live insects, feeder insects, roaches, worms, and live or frozen mice. Pet tarantulas should only be fed the exact amount of food they can eat because having leftover food lying around can make them sick.

Since tarantulas are naturally nocturnal animals, they should be fed at night. Tarantulas also require water, but not too much because they can drown. In the wild, tarantulas will often rely on the moisture from the surrounding plants, which means they will be happy with small amounts of water while in captivity.

At first, they will feed on smaller insects, worms, and larvae. They will also need to eat more often than the adult specimens.

What Are The Predators Of Tarantulas?

Tarantulas have several predators despite the fact that they are ferocious creatures. Birds, snakes, and bigger lizards are a few of the predatory creatures that go after tarantulas.

Yes, tarantulas will bite you if they feel threatened. However, this is their last weapon, because tarantulas will try to run away and hide first. If that is not possible, they might resort to biting.

But even when they bite humans, tarantulas will often “dry bite” them, which means they will use their huge fangs to bite you, but they won’t release their poison, Their intention is not to kill you, they just want to hurt you as a warning to stay away.

Tarantula’s bite is often compared to the bee sting in terms of pain. Some people can experience allergic reactions though, especially if they are sensitive to insect bites in general. In any case, if you get bitten by a tarantula, go to the nearest hospital, just in case.

Surprisingly, tarantulas can be good pets if handled properly. They are generally docile and can be domesticated to become affectionate. These tarantulas get used to daily handling and actually enjoy it.

Tarantulas love to explore and they will happily walk over your hands. They will allow you to get really close to them, and they respond very well to many things other pets absolutely hate, such as taking them to a vet or on other trips.

It is easy to make tarantula happy and they are actually low-maintenance. As much as they enjoy playing with you, they will also enjoy spending time on their own. They make no sounds, and you won’t even notice they are around.

With all of that in mind, tarantulas are good pets, but you should never forget that they are wild animals that can’t be fully trusted. Be careful whenever you handle your tarantula because things can go south in just a few seconds.

How To Care For A Pet Tarantula?

If you want to keep a tarantula as a pet, you need to properly care for it. There are several things to pay attention to, so let’s take a look at them:

Tarantulas are solitary animals and you should only keep one tarantula per cage. Their cage needs to have a lid that will prevent them from escaping, but it also needs to be properly ventilated.

You can place twigs, rocks, tree bark, hollow logs, and similar things into the enclosure to mimic the tarantula’s natural habitat. Since tarantulas love to hide, this will also serve as a good hiding place.

The bottom of the enclosure needs to be lined with an appropriate substrate, such as vermiculite mixed with potting soil and peat. Avoid exposing the enclosure to the bright lights.

Clean the enclosure when needed and make sure to remove any food remains after 24 hours. Since some tarantula species need high humidity to thrive, you will need to mist their enclosure every day.

Feed the adult tarantulas once or twice a week, and if you have baby tarantulas or juvenile tarantulas, feed them every day or every second day. Make sure not to feed your tarantula when it starts to molt because it is a stressful time for spiders,

While tarantulas may seem scary and even repulsive, they are fascinating animals and many people keep them as pets.

Tarantulas are skilled hunters that have no problem killing even the much larger prey. They will eat various insects, worms, mice, and even small lizards, snakes, and birds.

What do you think about keeping tarantulas as pets? Are you scared of spiders, or do you find the idea of a pet tarantula interesting? Write in the comments!