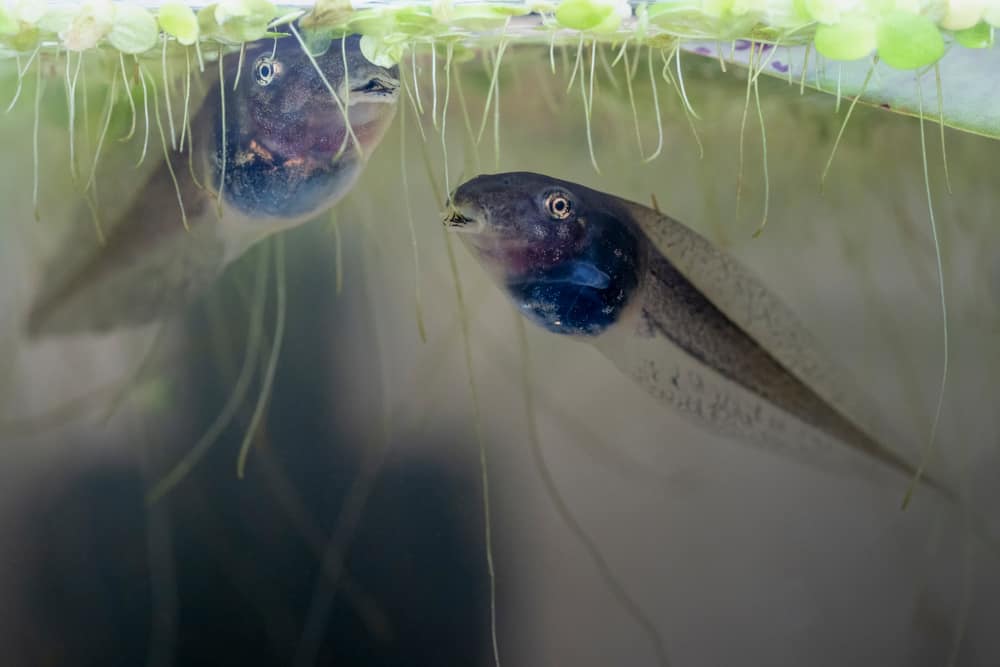 You may confuse them for fish upon first sight, but if you take a closer look, you’ll be shocked to realize they are amphibians.

Tadpoles are basically baby frogs or toads. Just like teenagers, as they grow, they feed voraciously on whatever they can fit in their mouths.

So, what do tadpoles like to eat most? Let’s see what’s on the menu.

Tadpoles, also known as polliwog, are the larval stage of amphibians. Whereas the majority of the tadpole species are fully aquatic, some species are terrestrial.

Terrestrial tadpoles such as the Ranixalidae inhabit wet crevices (cracka in walls) near ponds or streams from which they get their food.

Like fish, tadpoles swim together in schools. They actively seek food but downplay their activity when they encounter predators. They feed numerous times a day to get sufficient nutrients required to grow at a rapid rate.

Tadpoles of frogs are primarily herbivores who feed on soft decaying plant matter. On the other hand, salamanders and caecilians are carnivores.

Over time, tadpoles of the New Mexico Spadefoot toad (Spea multiplicata) develop a carnivorous diet along with a broader head, more prominent jaw, and shorter gut to adapt to food scarcity.

Other tadpoles are prone to cannibalistic tendencies during the scarcity of food. Its survival of the fittest as they turn on their pond mates. 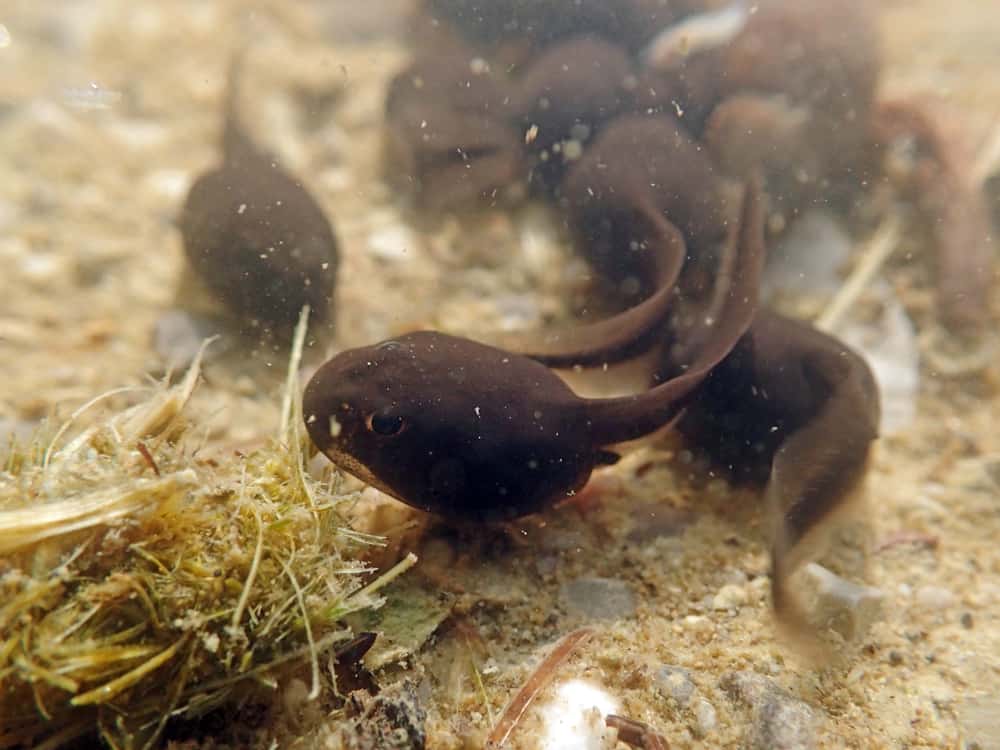 Some genera of the tadpole species, such as the Pipidae and Microhylidae, are plankton feeders. They spend time swimming through the water column feeding on plankton. Tadpoles feed on planktons through filtration of water.

With the above adaptations, these tiny amphibians are sure to make it through to adulthood, provided that luck is also by their side.

It takes about six weeks for some species of amphibians to reach maturity. Whereas, in other species, it may take up to three years for tadpoles to complete development. 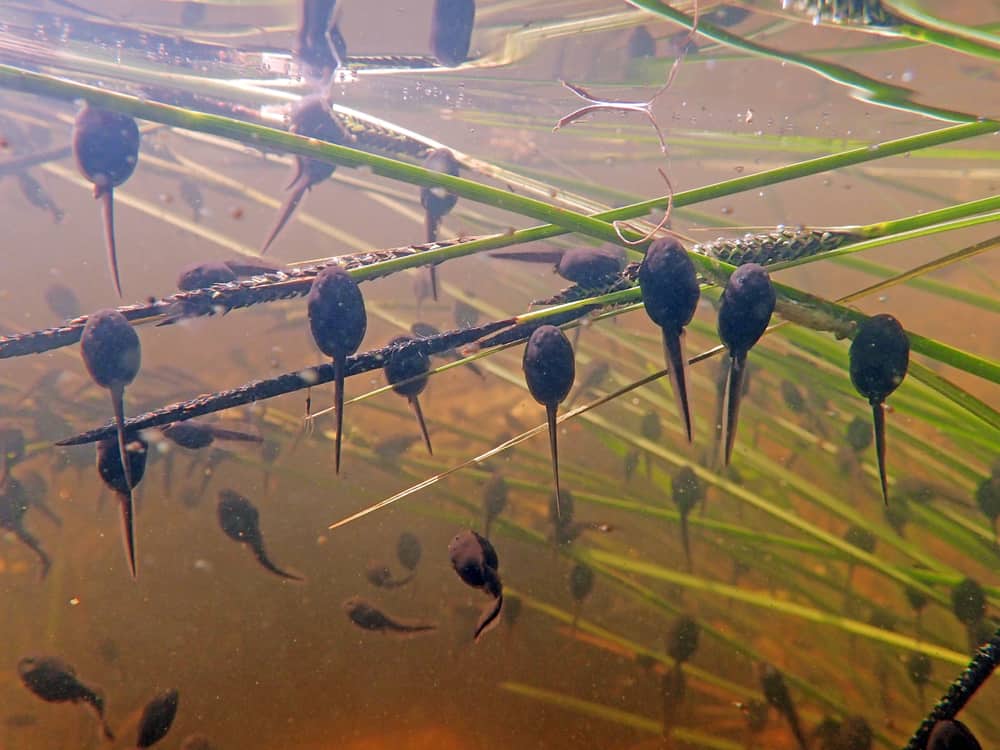 Yes. Tadpoles do eat dirt. The Kallars dancing frog (of species Micriscilus herrei) have bodies that help them burrow into the sand and gravel.

The tadpoles spend their time below ground eating sand and bits of organic matter. The Kallars’ frogs’ tadpoles have eyes covered with skin and eel-like tails for mobility.

Other species of tadpoles feed on detritus which is either dirt produced from soil erosion or organic matter produced by decomposing organisms.

What Do Tadpoles Eat Most?

Contrary to popular belief, tadpoles don’t have identical diets as their adult counterparts. Most tadpoles are herbivorous in their early stages. They primarily feed on soft plant matter such as algae.

Their diets vary from species to species. Tadpoles, on hatching, feed on the yolk from their eggs as it is rich in nutrients.

Tadpoles in the wild tend to eat whatever is readily available to them. Like all other polliwogs, they begin with their egg yolks and then feed on tender plant matter.

As they continue to grow, tadpoles will also eat:

Tadpole species that dwell in ponds have much more limited diets. Their daily bread essentially includes mosquito larvae and algae.

Foods to feed your pet tadpoles:

All the foods named above are sources crucial for developing tadpoles and aid in their transition from hatchling to frogs. They are rich in nutrients like proteins, vitamins, and other minerals to sustain their survival. 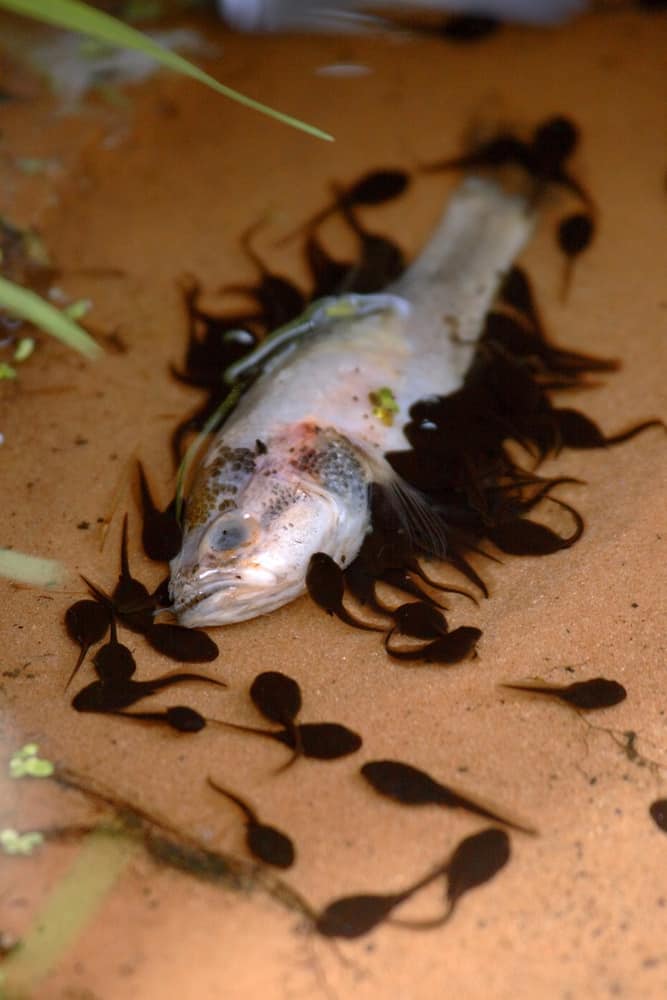 On the broad menu of a tadpoles diet, certain foods could prove harmful if ingested. A number of these items include:

Other foods that should not be taken by tadpoles or given to them include:

Take note of these harmful food substances when feeding tadpoles, especially if you consider keeping them for pets.

Keeping frogs as pets compared to tadpoles are very different things. Tadpoles require just as much effort to care for as frogs do. They are tiny creatures; hence, one has to be careful in handling and looking after the tadpoles.

To maintain a good life and contribute to the pets’ longer lifespan, here are some steps you can follow when feeding your tadpole:

Following these simple steps will ensure your pet tadpoles make it safely to their next phase of maturity as frogs.

Now that you know what tadpoles like to eat most, you can consider yourself an expert in tadpole husbandry. How does it feel?

It’s a fulfilling experience to watch these magnificent creatures undergo this miraculous process that is metamorphosis. That’s what you call frogress (progress)!