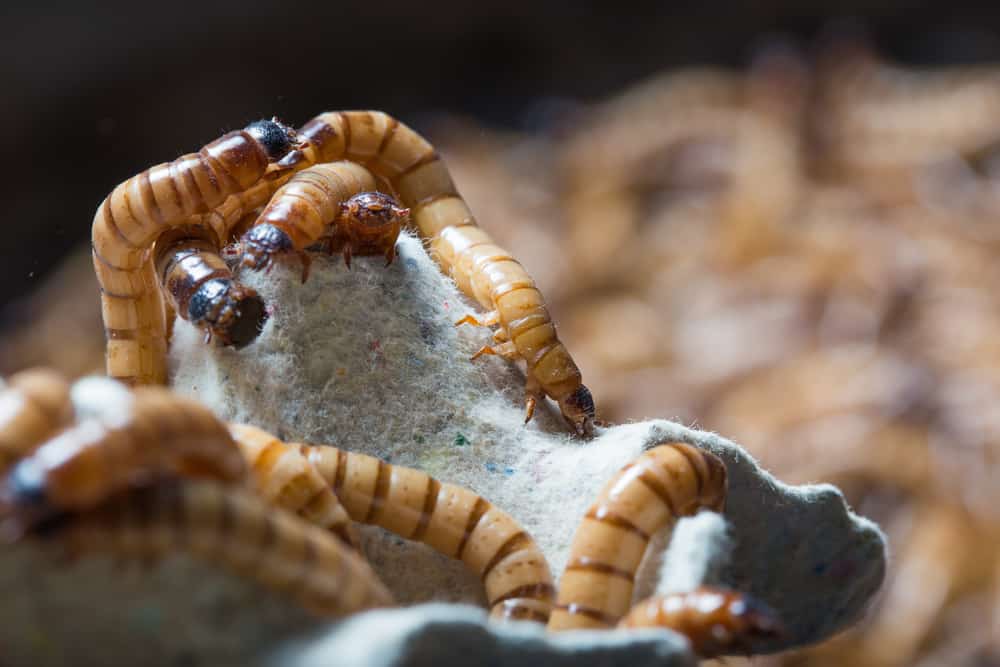 Superworms are the larvae stage of the darkling beetle species. Even if they aren’t the prettiest of creatures, they are some of the most useful worms to keep. But contrary to their name, they aren’t actually worms. Because of their relatively large size and higher nutritional value as food, especially in comparison to yellow mealworms, they have earned the name “superworms.”

They are a widespread food source for a wide range of species, wild animals as well as pets. Superworm larvae are also beneficial to humans since they eat animal corpses. They are organic material recyclers by nature and an important part of our ecosystem.

Superworms are the larval form of the Zophobas Morio beetle, one of the over 19,000 species of darkling beetle.

The larvae are about 50 to 60 mm (1.7-2.25 in) long when fully grown, but are different from mealworms since the ends of their bodies are darker. Superworms are wormlike larvae with six legs and a segmented body. They can be different colors, their body usually being tan, a black/dark brown head, and black/dark brown stripes on the end. They are thicker and larger than a mealworm, measuring approximately 2″ in length. Superworm beetles have a thick and hard carapace and a matte dark brown or black carapace as adults.

Reptiles (like the bearded dragons), turtles, frogs, birds, fish, and other insectivorous animals will all eat superworms. They can also be used as bait for fishing. According to Dubia.com, their nutrient content is comparable to mealworms, but they are preferred over them because they have a softer exoskeleton, which makes them easier to digest. Their life cycle includes a full metamorphosis. They are as small and white as an egg. The larvae hatch after a few days. If they live with other worms as larvae or superworms, they can live for six months to a year. Only when they are separated from other superworms do their bodies begin to pupate. When superworms are ready to pupate, they curl inward and spin silk cocoons that become a shell. At first, the beetle will be light yellow, before turning black as its exoskeleton hardens. A darkling beetle has a life expectancy of 3 to 15 years.

The larvae are odorless and easy to contain, which makes them perfect for keeping in a house. On the other hand, adult beetles have a pungent chemical defense that can be released when provoked.

Superworms, unlike mealworms, can bite. They can also sting you with a tiny pin on their tails. If you are using them as feed, it’s probably best to only give superworms to larger or adult animals.

Where do they live?

According to the article published by sargentwelch.com, Central and South America are the main habitat of superworms, also known as “Kingworm.”  Superworm larvae consume dead plants, leaves, and tree bark. After they breed, they leave their pupae in the soil. The diet of the newly formed beetle will be similar to that of a larva. In hotter temperatures, darkling beetles seek out cool, damp places, and they prefer dark, moist environments overall. These insects are particularly prevalent on farms with plenty of manure for them to prosper.

What do superworms eat in the wild?

Superworms are omnivores who won’t back down from any kind of food. Superworms and beetles are detritivorous scavengers in the wild. They feed on both new and putrefying greenery, leaves, tree bark, and dead animals. Because of this, they are excellent cleaners for biologically active terrariums. 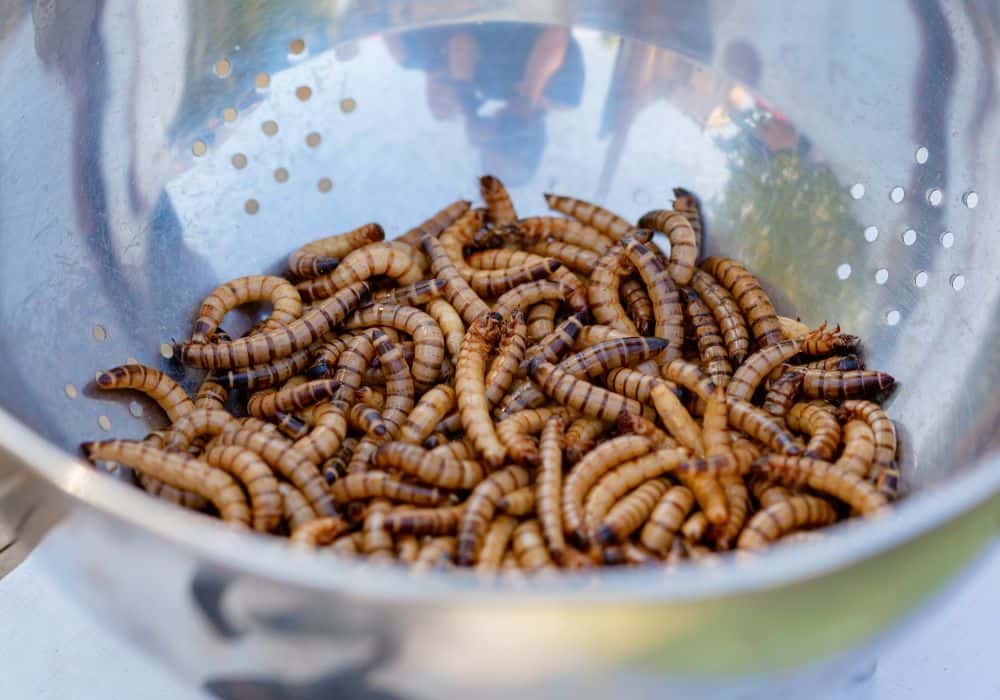 What do superworms eat in capacity?

In order for superworms to grow and breed faster, they need a healthy diet. Superworm nutrition is important to consider as well-fed feeders make better food for the pets you’re feeding.

Superworms raised as feeders should be fed a plant-based, low-protein diet. This helps avoid spiking their protein levels that can harm the pet you need to feed. A normal diet usually consists of grain-based substrate that is safe to eat. Rolling oats, barley, and stabilized rice bran are some of the best grains for this. These grains shouldn’t be fed on their own and they should be supplemented with fresh fruits and vegetables.

Some foods you can consider:

How to care for superworms?

Superworms can be purchased online or at a pet store. They are relatively passive and easy to grow, as you only need to provide a habitat and food while keeping them at room temperature. To determine their sex, you need to look at their size: the female is always bigger than the male.

What kind of habitat do they need?

First, you must obtain a container. You can use any type of plastic container and transform it into a habitat. You can use a bus pan, storage bin, or wash basin. The minimum size should be  200 square inches and 6-8 inches tall. When it comes to superworm’s habitats, floor space is more important than height. Because superworms dug deep into the bedding and shelter from light, preventing escape is usually not an issue. Just to be sure, the walls should be smooth so that the worms cannot escape. It’s best to leave it open or, if you have a lid, provide good ventilation. When it comes to bedding, bran is the most widely used. Wheat middlings, ground oats, or crushed cheerios can also be used, but never use flavored or instant oatmeal. The bedding, which provides a feeding source, must be 1-2″ thick. The adult beetles will also lay their eggs in this bedding. The best temperature to keep your superworms in is 78 degrees Fahrenheit, but a temperature range of 68 to 88 degrees Fahrenheit is acceptable. Humidity is important, but it shouldn’t get over 50%.

Refrigerating live mealworms is standard procedure, superworms should never be kept in the fridge as it will kill them.

Superworms require a constant supply of water and moisture. This promotes their development and stops cannibalism. Fresh fruits and vegetables are usually sufficient, but remember to check your superworm bins daily for signs of mold, which can affect them. Fresh fruits and vegetables are the simplest way to hydrate. You can use slices of cucumbers and melons, as they are soft and watery and make for an easy snack.

How to feed and when to feed them?

These worms are very simple to feed. They are voracious eaters who will devour everything you place on top of their culture. If it’s bigger food like vegetables or fruits, it should be sliced into fairly small strips. Thinner servings enable them to eat bigger amounts while also obtaining more hydration from the fruits and vegetables that they need. You can leave their food in their space for up to two days, or until it starts to grow mold. When it begins to spoil, get it out of its environment.

When to feed your superworms? They can survive without new food for over 2 weeks, due to the fact that their bedding includes a variety of dietary components that they are able to eat.  Superworms are able to eat the exact amount they need by themselves, so you don’t need to worry about portioning their food.  Purely provide fresh food once a week, and the worms will eat all they need to be healthy.

In conclusion, superworms are a popular and easy insect to grow and breed. They can feed a large variety of animals, from reptiles to birds and fish and are bigger in size than the usual worms, making them the perfect feeder insect. They are omnivorous and will eat almost anything that is available. They provide a great source of protein but also help humans with cleaning their environment.

You can raise them at home without a lot of trouble, and with a little research and care, you can have your own big colony.

Have superworms piqued your interest? For any more questions, don’t hesitate to leave a comment.