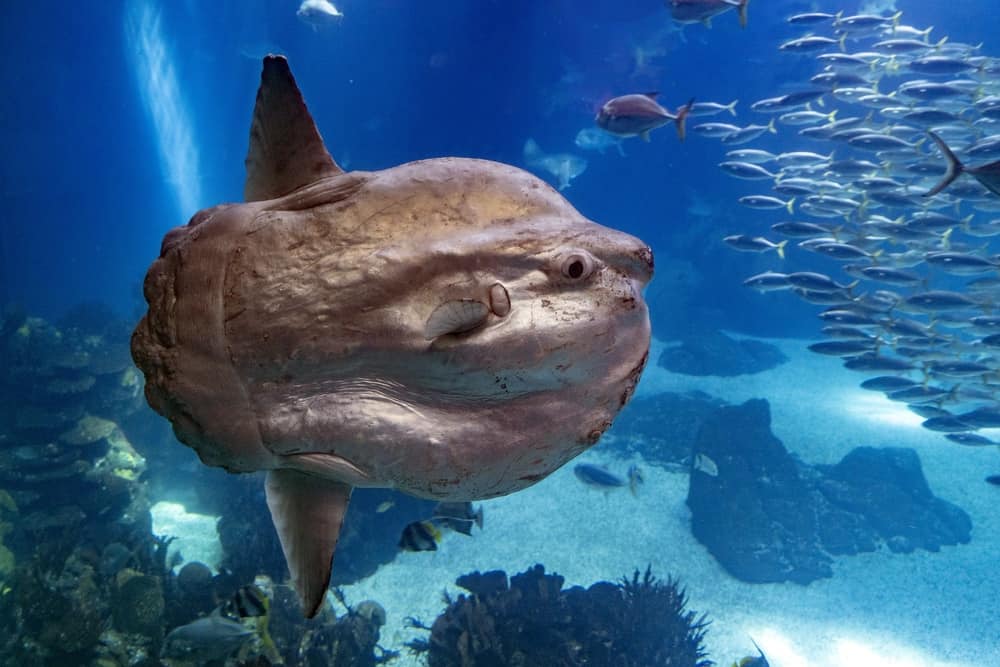 Sunfish, also known by their fun scientific name Mola Mola, is the largest and heaviest bony fish in the world and can reach an extraordinary weight and size. More than that, they are gorgeous and fascinating animals to observe both in the wild and in captivity. How exactly does one keep such a weird giant in captivity, however? Also, what do sunfish eat and how to care for them? We’ll try to cover all the basics below.

Everyone has seen a sunfish but few people know much about these fascinating giants. In fact, scientists are still discovering new things about their diet, lifestyle, and the range of their habitat. Even though the Mola Mola Sunfish is pretty gargantuan and we’ve been observing it for a long time, it still managed to surprise people with its varying diet, how deep it delves, and other peculiar facts. So, let’s go through everything here.

This huge bony fish species is covered with heavy-duty bony armor which protects its body against many predators. It has two tiny eyes on the sides of its flat head and its mouth can be difficult to spot when closed and when you don’t know where to look.

The standard Mola Mola Ocean Sunfish typically reaches the astonishing weight of over 2,200 pounds or 1,000+ kg – that’s over a ton! What’s more, individual specimens have been found to reach the even more absurd weight range of 5,000+ pounds or over 2,300 kg.

When talking about the sunfish, we’re typically talking about the Mola Mola Sunfish that traverses all the major oceans on Earth except the Arctic and Antarctic oceans. Sunfish are pretty commonly found all across the Indian Ocean, as well as the Atlantic and Pacific Oceans, and across both coasts of the United States.

These fish tend to spend most of their time near the surface of the water – that’s where they often feed, bask in the sun, where the females are spawning their eggs and the males inseminate them, and so on.

In fact, said basking in the sun is why the sunfish is called that way – pretty much the same reason why sunflowers are called as they are. In the sunfish’s case, it is often seen laying on its side on the ocean surface, effectively “sunbathing” its body. There are a few reasons why the sunfish does this bizarre behavior few other fish engage in:

This last part is a prime example of something we’ve only recently discovered about the Mola Mola. For decades, scientists used to think that these sunfish only live and hunt on the surface but we now know that they also delve much deeper into the water thanks to the thermoregulation they get by sunbathing.

While we’ll mostly talk about the Mola Mola ocean common sunfish, it’s worth mentioning that there are many fish species that are often categorized as sunfish too. Most of them are freshwater fish of the family Centrarchidae and they aren’t what we talk about as they are not technically of the same family as the saltwater Mola Sunfish. Some of these freshwater fish species include:

And then there are also the Largemouth bass and Smallmouth bass, as well as the Black crappie and White crappie. While all of those are technically seen as “sunfish”, however, they are not what we’re talking about.

Molas are the largest of the three which is why we often refer to those when we talk about the Sunfish. Masturus and Ranzania are smaller but very closely related to Molas and they include species such as the Slender Sunfish, aka Ranzania laevis and the sharptail mola or Masturus lanceolatus.

What do sunfish eat in the wild?

So, how exactly do these 1-ton saltwater disk-shaped fish feed themselves? For the longest time, scientists believed that the Mola Mola lived on a diet comprised entirely of jellyfish as that’s what we had observed them consume on the ocean surface.

And the Ocean Sunfish does eat a lot of jellyfish. This is a very convenient prey for the Sunfish as this predator isn’t exactly fast. However, jellyfish’s bodies are mostly water and aren’t all that nutritious to keep a 1-ton giant well-fed.

So, when scientists eventually discovered that sunfish also prey on other small fish, aquatic insects, salps, crustaceans, fry, various larvae, eelgrass, and squids, their diet started to make much more sense. It also explains their constant sunbathing as most squids and crustaceans in the ocean are found much deeper and the Sunfish needs to dive as deep as 650 or down to 3,300 feet below the surface to get to them.

It’s also worth mentioning that the presence of eelgrass in the Mola’s diet technically makes it an omnivore and not a strict carnivore. Yet, that seagrass isn’t exactly a major part of Mola’s diet.

How does the sunfish get its food?

The Ocean Sunfish Mola is a predator but it’s not exactly fast. The average swim speed of these bony giants is 2 miles per hour or a little over 3 km/h. The Mola is capable of short bursts of faster swimming but nothing too impressive. So, the way they catch most of their prey is by slowly stacking it and then sucking large portions of water, dragging their prey in with it.

Once the Mola has got its victim firmly between its teeth, it will push the water back out and then swallow its prey instead. This method is slightly similar to how the great Baleen whales feed on plankton, only the Mola does have teeth and so it needs prey that’s still large enough to reliably be caught in them.

What are the Sunfish’s natural predators?

While the Ocean Mola Sunfish is a huge and ancient predator, it’s not all the way at the top of its respective food chain – there are a few predators that are actually capable of hunting and killing these large bony fish.

The three main examples are:

While the Sunfish is pretty easy prey for all three of these predators it doesn’t have any other major predators which allows it to roam the oceans relatively freely.

What Do Sunfish Eat In Captivity?

When kept in aquariums, Sunfish are usually kept on their natural diet. They can also be fed other things such as minnows, snails, crayfish, worms, minnows, frogs, crayfish, and others – everything they can easily consume and that’s rich in proteins, vitamins, and minerals.

What Do Baby Sunfish Eat?

Baby fish – both in the wild and in captivity – will most commonly eat fish larvae and baby jellyfish. That’s because these are very small and easy prey for the baby Sunfish to suck into its small mouth and consume. They are also easy food to give in aquariums which make looking after baby Sunfish pretty easy and fun, at least as far as the feeding is concerned.

The Ocean Mola Sunfish is a fascinating animal and is quite different from any other fish found in the sea. Funnily enough, it’s also different from the many other freshwater fishes we call “sunfish” which is the source of quite a bit of confusion.

While essentially an omnivore, the Sunfish does feed mostly on predation which it accomplishes pretty successfully despite its slow swim speed and preference for warm surface water.