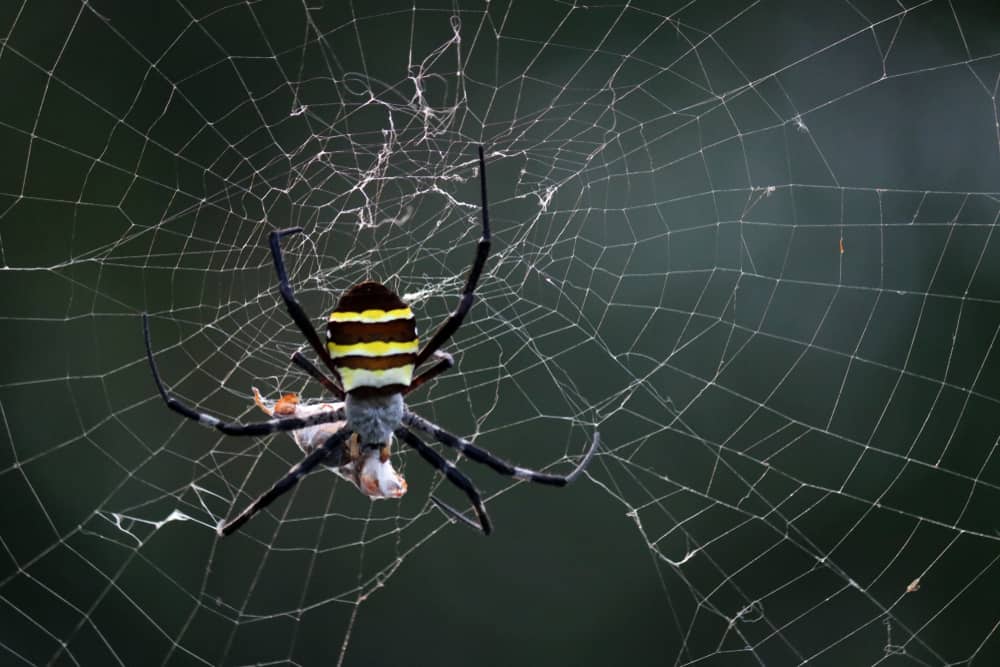 Spiders play a huge role in pest control. They eat bugs and insects that not only carry diseases but also destroy our crops. Spiders can also make great pets, as they are very easy to feed. Read on to find a comprehensive answer to the question, “What do spiders eat?” 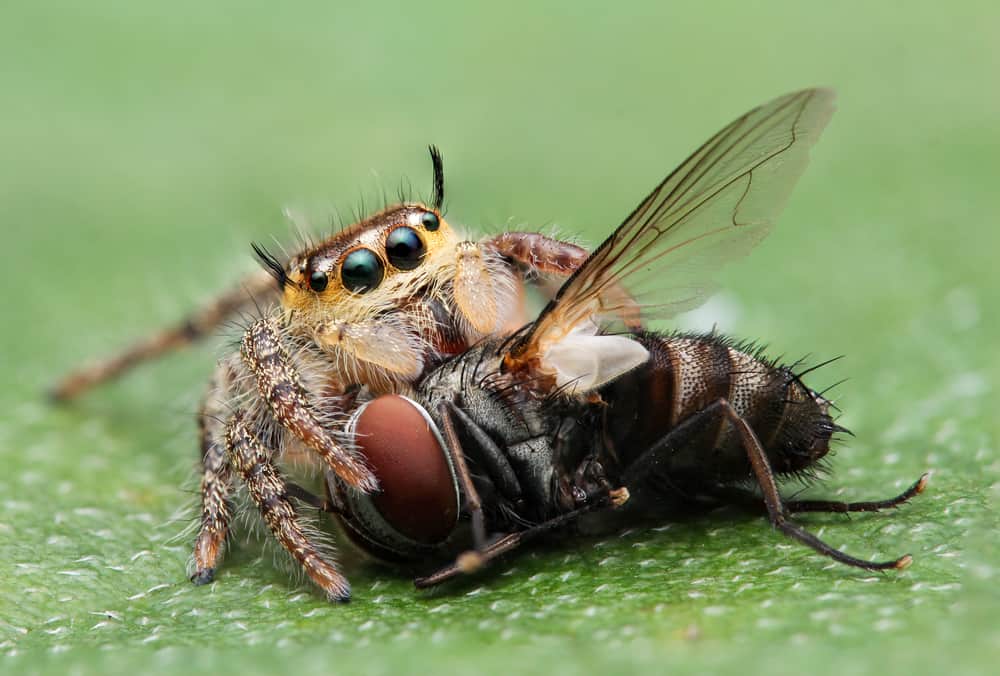 Contrary to what some people think, spiders are not insects. While they fall under the same phylum called arthropod, spiders are arachnids, a class they share with mites, ticks, and scorpions.

Unlike insects that have three body parts (head, thorax, and abdomen), six legs, two eyes, and wings, spiders have two body parts (cephalothorax and abdomen), eight legs, eight eyes (some species have up to twelve eyes) and no wings.

Spiders also lack chewing mouthparts. These are substituted for chelicerae, pointed appendages that they use to suck up liquids from their prey.

They don’t have an antenna too like the majority of arthropods; instead, they have sensitive hairs on their legs and a few other parts of their bodies to pick up vibrations, sounds, scents, and air currents.

Spiders can be found anywhere, with the vast majority living in the dry land, though there are special species that live in freshwater.

There are over 45, 000 species of spiders living in different habitats across the world, all with different characteristics and appearances. For instance, there are those with cartoonish behind, cannibal species that look like pelicans, and some that can even jump on demand.

Like most living organisms, spiders choose their habitat based on the availability of prey and the best conditions for reproduction.

Some will pick a location based on the existence of other spiders and if they find an area fit for nesting, sometimes they will even kick their competitors out of their nests and claim them for themselves. It is important, however, to note that some spiders are also kept by humans as pets.

Fun Fact: All spiders produce silk and the average spider can produce up to six different types to serve different purposes such as capturing prey or spinning webs.

Here is a video with more facts about spiders.

What Do Spiders Eat in the House?

Spiders are natural predators. They prey on a wide range of organisms and can use several techniques to capture their meal. For example, they may trap their prey in their sticky webs, chase until they catch it, impersonate it to avoid being discovered, or catch it with sticky balls.

While some species can actually see their prey approaching, the majority detect prey by sensing sounds, scents, and vibrations.

Once they have captured a prey, they use chelicerae to strongly grip the organism and inject venom. This venom contains digestive juices that break down the prey into liquids that the spider can ingest.

Check out this video of a spider catching and eating its prey:

Types of Food That Spiders Eat in Their Natural Habitat

If a spider finds an organism small enough for it to catch and eat, it will quickly devise the most effective way to capture it. Depending on the size and species, a spider will likely feed on the following:

As you can see, spiders’ diet is mostly pesky insects, and feeding on these helps bring down their population. In fact, a single spider is estimated to eat up to 2, 000 insects every year. Here are ways through which spiders’ diet benefits humans:

What Do Spiders Eat as Pets? 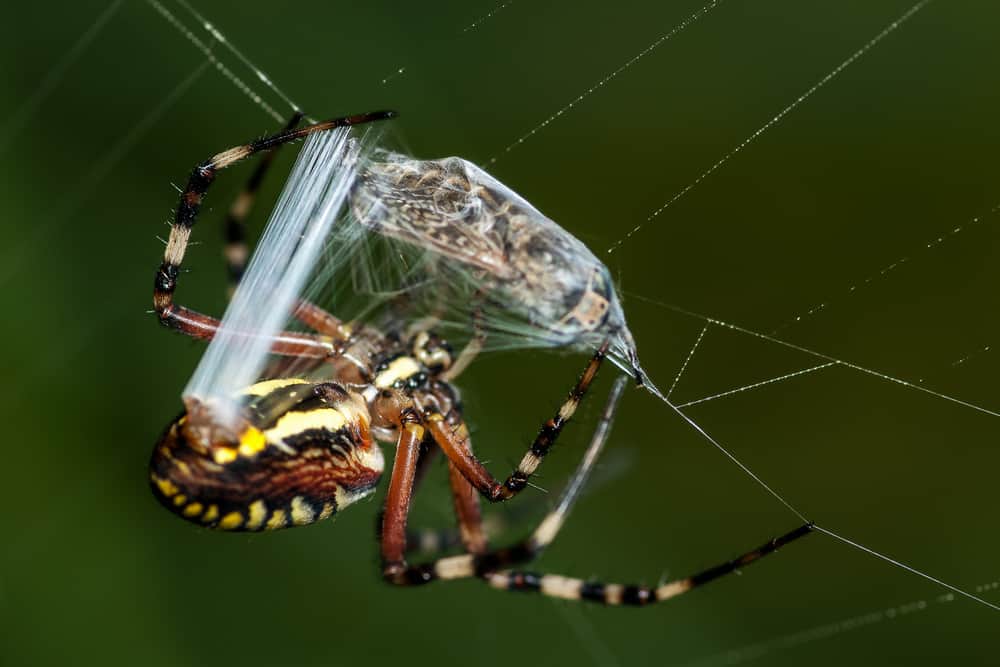 As we stated earlier, some spiders can also be kept as pets. These are usually non-venomous species that do well in captivity and examples include tarantulas, jumping spiders, wolf spiders, grass spiders, and fishing spiders. What to feed your spider will largely depend on its species, but any pet spider will enjoy the following: 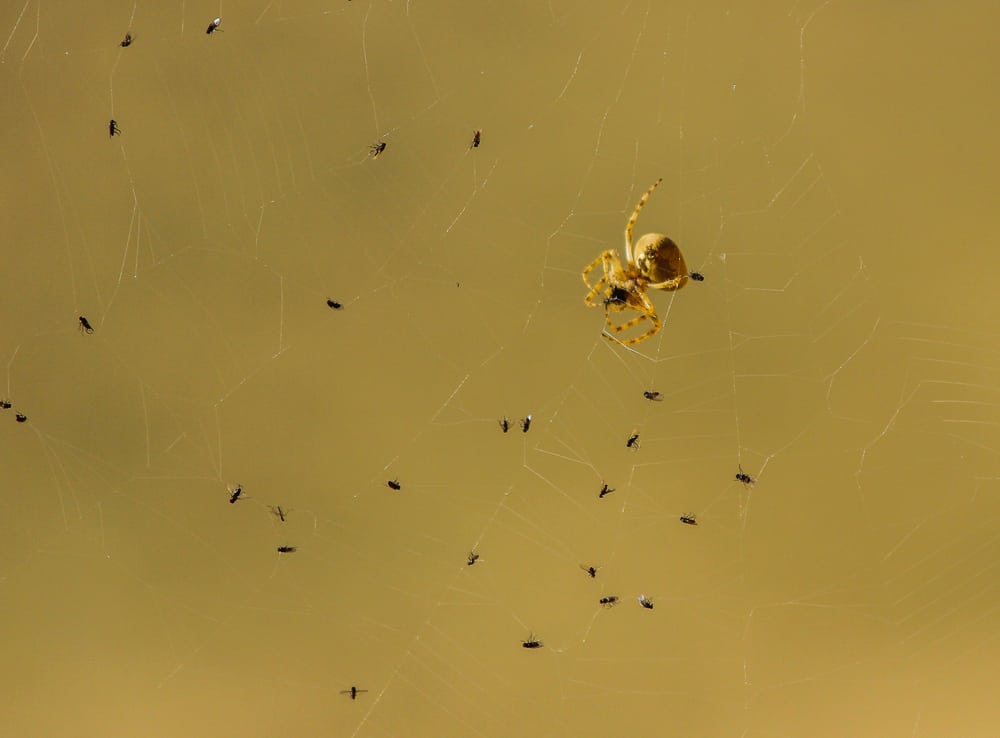 Make sure you are not overfeeding your spider, as this can put them at risk of busting their abdomen if they fall from a long distance. But some species like tarantulas know when to stop eating and will only eat what they need. If you find yours has not touched its meal by some time, say the following day, just take the insect out of the cage.

While at it, check the status of the prey. They must be well-fed before feeding them to your spider. Check the local pet store for commercial cricket or worm food.

And don’t worry if your pet does not seem to be interested in food for a given period of time. Some spider species can go for months without touching the food you give them.

Depending on their dietary needs, a spider can go through lengthy periods of fasting and will still be fine. In fact, some can go for up to 30 days without eating, with tarantulas and black widows, having the longest fasting periods.

The only time you should be worried about your spider not feeding is if they have a shriveled abdomen, as this could mean they are not getting enough water. Check to see the water dish is not empty and refill if necessary. Don’t stress if your pet doesn’t drink too much water. Spiders get most of the moisture they need from food.

After feeding the spider, keep the cage firmly sealed. Spiders are more likely to escape after meals because they have the energy to run.

Do not feed your spider human food, and there are two reasons for this. First, human food usually contains a lot of seasoning, most of which can harm the spider. Second, spiders cannot chew their food. As we mentioned earlier, they inject digestive juices into the food they want to eat to liquefy it, so even if the food doesn’t have any seasoning, they would still not be able to feed on it.

If you got your spider from the wild, it is wise that you feed it wild-caught prey because its body is already adapted to digesting such foods. Similarly, if you bought your spider from a pet store, make sure to only feed them insects and foods from the store.

Do not feed an adult spider that has just molted until after 14 days. In fact, remove any insect that may be in the cage during this time. This is because the spider’s skin is still very soft and delicate and can be harmed by the insect.

Drop live prey into the cage, as this will be much easier for the spider to see. If you are serving mealworms that have their heads crushed, however, consider dangling them so they can seem lifelike.

For more information on how to feed spiders, watch this video:

Spiders can live both in their natural habitat or with humans as pets. In both environments, spiders will mainly feed on insects and bugs, and depending on size and species, they can also feed on other spiders. Most of these foods contain moisture, but spiders will still need water to complete their diet.