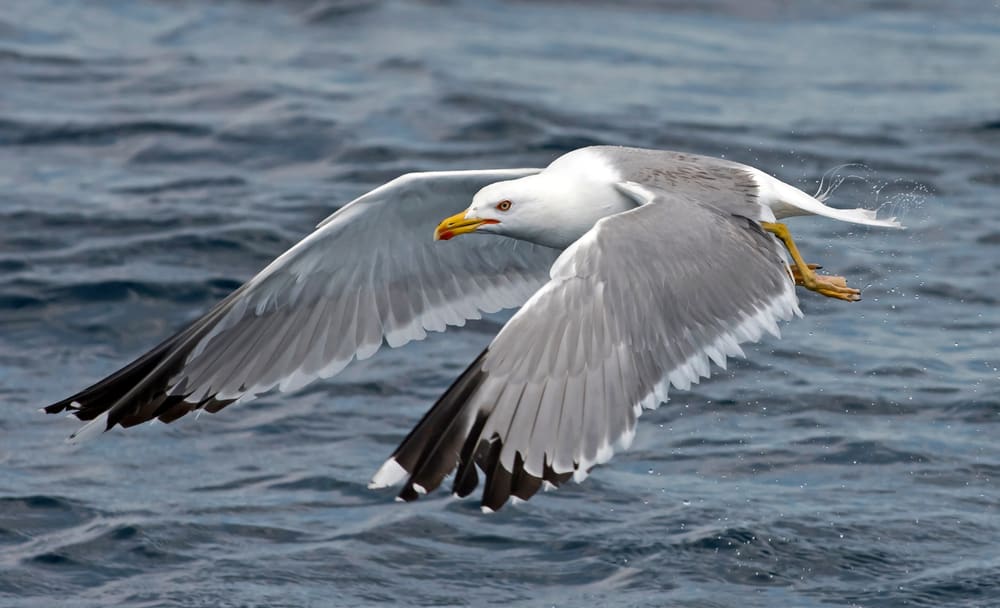 If you’ve seen a loud, squawking bird near the sea steal someone’s French fries, you probably identified it as a seagull. There’s more to these creatures than meets the eye, including what they eat.

Seagulls are known to be scavengers, but they also hunt their own food. They enjoy eating many types of fish and mollusks, as well as crab, shrimp, oysters, octopus, and squid. If they come across unsupervised food or scraps, they’ll surely eat that too – even if it’s processed, human food.

This article will cover what the seagull is truly like, including what it eats and the intelligent strategies it uses to get its next meal.

1. The Physical Characteristics of Seagulls 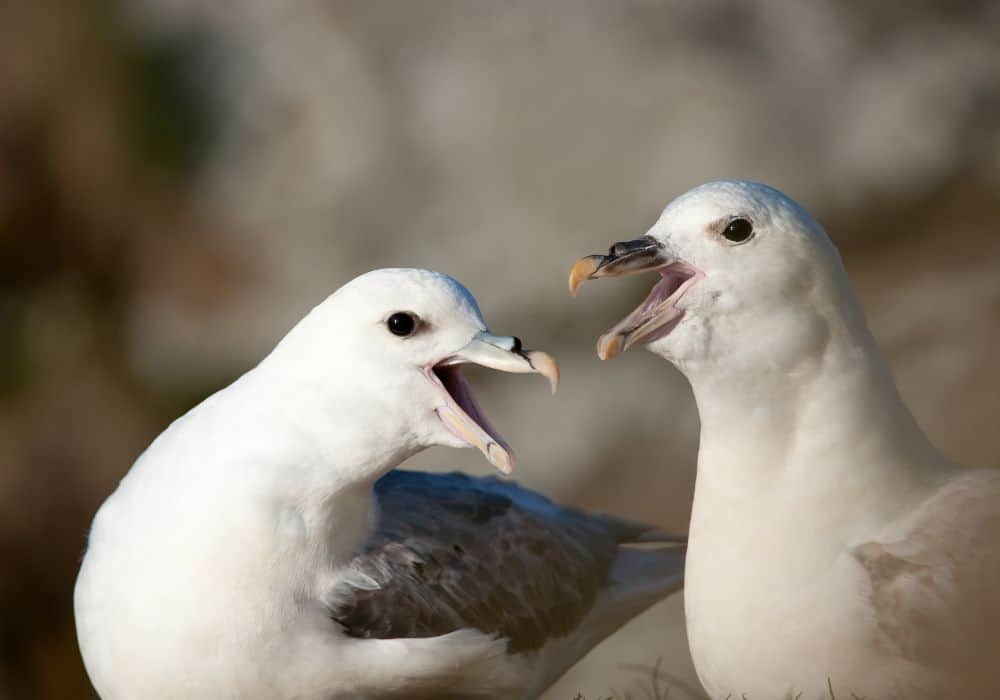 The gull often called a seagull, is a marine bird with 28 different subspecies. The smallest subspecies is the Little Gull and the largest is the Great Black-Beaked Gull. They are 11 inches tall and 27 inches tall, respectively.

Seagulls can weigh between 4 ounces and almost 4 pounds, depending on the bird. Males are generally larger than females.

Most sport feathers are gray, white, black, or a combination of these colors. A young seagull may be light brown before developing its adult plumage. Feather color could also change with the seasons.

Seagulls are built for coastal living, as they have special glands over their eyes that flush salt water from their systems. Their hooked beaks are short and help them pick apart prey.

All seagulls have two lanky legs that are yellow, black, pink, or red. These legs are connected to webbed feet that help them swim on the water’s surface. Their hind toes, found halfway up the bottom half of their legs, are not webbed and are used to help them perch on ledges and rooftops.

The gull’s long wings can measure around 70 cm for a small gull and up to 5 feet in length for larger gull subspecies. These wings enable them to fly up to 28 miles per hour. They also have a tail that can be rounded or square. 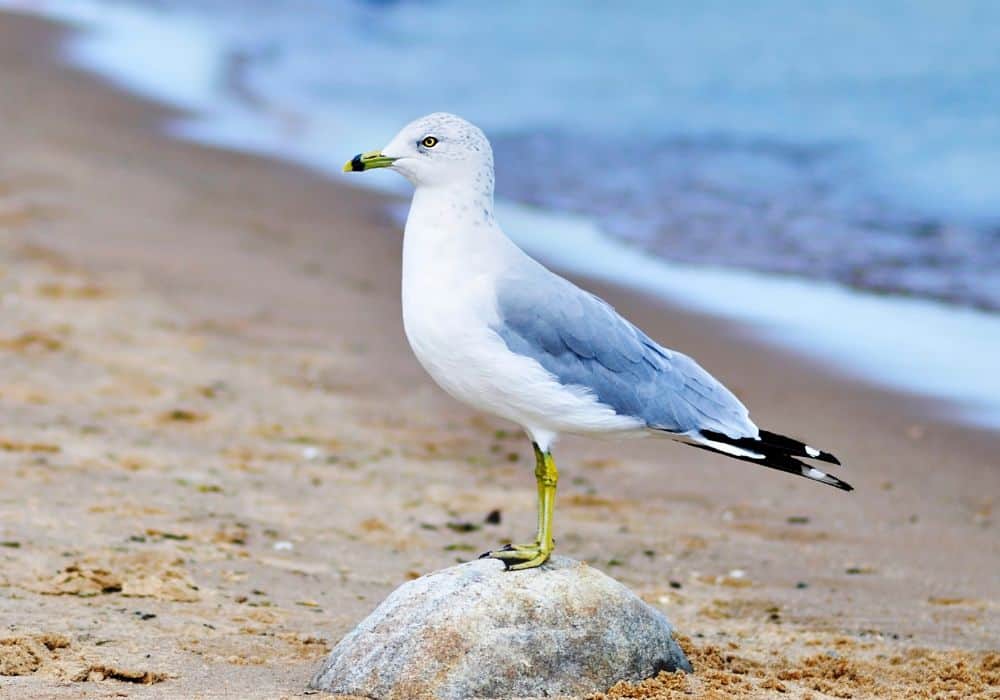 Seagulls can travel large distances, affecting where and how they live.

You can find seagulls in North and South America, Australia, Europe, and some islands near Antarctica. They are not as common on tropical islands, although a few species do breed on them.

It’s no surprise that seagulls are found near the sea, but they can also live around salt marshes, on piers, around bays, and – rarely – inland. You can also find them in waterways, landfills, and some farmlands.

Seagulls spend a lot of time out in the open sea. They can withstand the coldness of winter on the water, including ice, by cooling down their extremities and keeping their core warm.

Seagulls do not need to live near a freshwater source, as they have special glands that excrete any salt they drink.

These gulls will build their nests on sea cliffs, sand dunes, islands, and other locations far from predators and curious humans.

Seagulls lay anywhere from one to six eggs per batch. Most start their breeding season in March or April, begin to construct their nests, and lay eggs by May.

Eggs incubate for about a month, although, sadly, only about 50% of eggs will hatch and survive. The newly hatched gulls will need the warmth of their parents for the first three days. They will whine and whimper to call their parents, but this is natural and doesn’t mean they’re distressed.

Fledglings can fly after 5 to 6 weeks and leave the nest. They reach full independence at 7 to 8 weeks after hatching.

Gulls sexually mature at different ages according to subspecies. They can live up to 20 years, but most live between 5 and 15 years.

3. What Do Seagulls Eat?

Seagulls are mainly omnivore scavengers, eating any food they can find or steal, including carrion AKA dead animals. Their favorite food is fish and mollusks, like clams and mussels. Some of their preferred fish food includes mackerel, herring, sardines, cod, bass, candlefish, and tuna.

On their own, they’ll hunt for fish, insects, rats, rabbits, reptiles, and sometimes even amphibians. They’ll also try to snag some invertebrates like crustaceans, shrimp, oysters, octopus, and squid if they find any. They may even eat plankton.

Seagulls are also notorious for stealing food – especially human food on busy coastal beaches. They’ll eat anything you leave behind or leave unsupervised, including chips, sandwiches, nuts, fruit, and any other processed or natural food.

Unfortunately, many seagulls are also attracted by the colors of littered plastic on or near beaches and eat them, causing thousands of deaths every year. 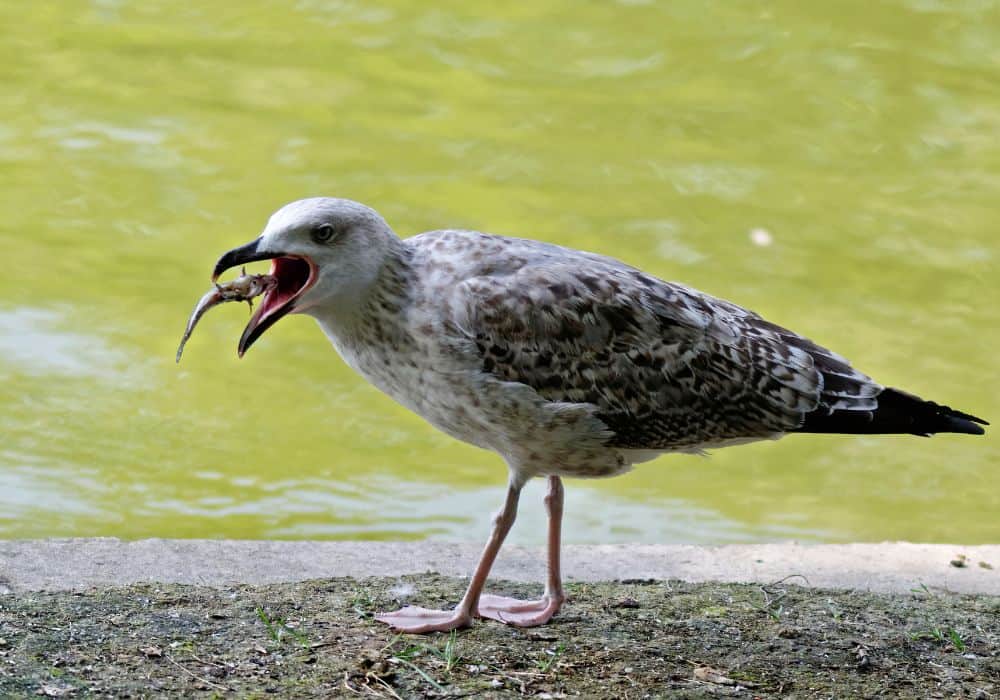 4. What Do Baby Seagulls Eat?

Baby seagulls rely on their parents for sustenance when they’re in the nest, especially during the first two weeks of life. Both the female and male adults will work as a team to feed their hatchlings.

The adults will go out and hunt as always and swallow their food. Sometimes the mother will stay behind with the seagull chicks while the father hunts. While feeding their babies, the seagulls may look for more natural foods if they’re available as opposed to human food.

They then regurgitate it as partially digested food from a special place in their gullet called the crop. The crop prepares food for digestion before it reaches the stomach. The regurgitated food is fed to the baby seagulls, beak to beak.

Once the babies fledge and fly on their own, they will begin to look for food independently; however, they will still rely on and stay close to their parents for a few more months.

5. Do Seagulls Change Their Diet Seasonally?

Seagulls change their diet with the seasons. In summer, they take the opportunity to consume any human food they find – especially for those living near popular beach destinations. This includes snacking on chips, bread, fruit, vegetables, or even a half-eaten slice of pizza that was thrown into an open trash bin.

When autumn and winter hit, they will move a bit inland where they are better protected by storms. They will still fly out to open water to hunt fish, but inland they’ll find worms and other insects, small birds, mice, seeds, and even organic human garbage to salvage.

Seagulls in spring will eat whatever is available to them. Those feeding their young will try to hunt wild prey, such as fish, but will enjoy any meal so long as it becomes available.

6. How Much Do Seagulls Eat?

Gulls are voracious eaters, consuming one-fifth of their body weight in food every day. Typically, this amounts to 5 to 10 ounces of food.

Their diet is usually split into 3 to 6 meals per day. They tend to feed most early in the morning or late in the afternoon, avoiding the extreme temperatures of midday.

Baby seagulls will be fed as often as their parents can regurgitate.

Seagulls are intelligent birds with unique feeding habits. They have been known to work as a flock, stamping their webbed feet to imitate rain falling on the ground – this tricks earthworms into coming to the surface where the gulls can eat them.

Seagulls may hunt and eat in groups, but it’s every bird for themselves once a meal is secured.

When they find shellfish to eat, they fly high with them in their grasp. After finding a good spot, the gull will drop the mollusk down below onto rocks so that it cracks open and is ready to eat.

For those living near farmland, you’ll see them following the plow to take advantage of the upturned soil, looking for grubs.

If they want to scope out an area for food but need to conserve energy, you can see them hovering over paved bridges, using the rising heat to help keep them in the air.

Gulls are known for their keen sense of smell and excellent vision. Scouting meals from far above, they swoop down and secure them before competitors take notice. They can even catch bugs and eat them mid-flight.

When gulls swoop down on humans and steal food, it often becomes a problem and is called dive bombing. This usually doesn’t happen unless you hold your food up into the air or throw food to entice the gulls first.

Gulls can also unhinge their jaws, which allows them to swallow large chunks of food.

8. What Food Is Toxic for Seagulls?

Avocados, chocolate, caffeine, fruit pits, onions, and certain fatty foods should not be fed to seagulls as it could cause them to get sick or even die.

Seagulls have large appetites, finding and hunting food every chance they get. Although they’re known as loud, stealing birds, their tactics are to be admired.

From open sea to inland, these birds can munch on fish, mollusks, small mammals like rodents, carrion, and more. They are opportune feeders who are much cleverer than we give them credit for!