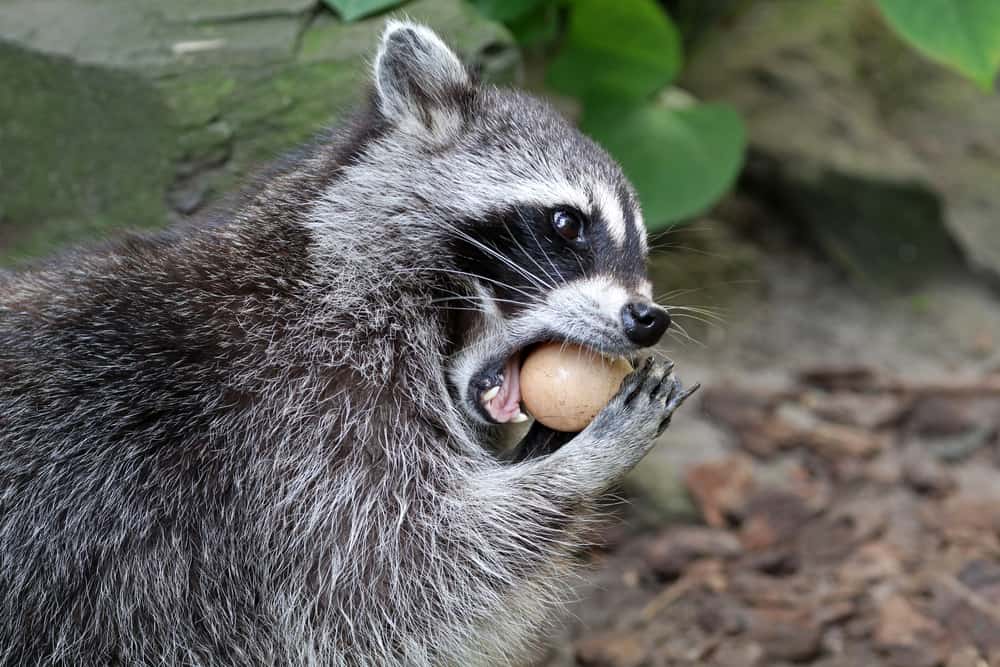 Commonly known as the “masked bandits,” raccoons are famed for their mischievous nature. They raid campsites and easily pry the lid of trash cans in search of a meal.

So, what do raccoons eat? Let’s dive in and find out.

Being nocturnal, they hunt during the night and rest during the day on high trees away from predators.

As independent creatures, the masked bandits are not known for sharing. After a hunt, they dine alone.

Their forefeet resemble that of human beings with five slender fingers. They are equipped with sharp claws to catch prey on land and in water. These features also come in handy in digging up grass and dirt in search of grub.

In addition, their paws are used for inspecting food and picking away pieces they don’t like to eat.

Like human beings, raccoons have incisors, molars, and canines used for biting, chewing, and tearing the flesh of their prey and other food substances. However, they are only known to hunt when the opportunity arises and mix their diets with fruits, nuts, and berries.

Far from being the best predators, these critters tend to go after smaller prey like snakes, frogs, and insects, which is a rewarding source of nutrients.

The scientific name for raccoons is Procyon lotor. Lotor is a Latin word meaning ‘to wash.’

If you’ve come across a raccoon or two, you’ll notice that they have a sense of table manners. Before having a meal, they tend to wash their hands or their food. Is it because they are hygienic? Or is it for some other reason? The truth behind this phenomenon is yet to be known.

Initially, they were known solely to live in forests, but they extended their range to urban areas where they coexist with human beings.

Food in urban areas is easily accessible and available throughout the year. For the ‘trash pandas’ as they are also known, this is a bonus.

What Do Raccoons Eat Most?

Like other omnivores, raccoons feed on a variety of foods. Their diet mainly consists of fruits, plants, nuts, grain, and small prey. On occasion, they are known to venture to areas inhabited by humans in search of a meal.

Raccoons will invade trash cans, compost sites, and even camps to find whatever they could lay their little paws on to fill their bellies. The food items they relish most include:

These, among many other foods, are a favorite for raccoons to eat. Their capability to adapt to different environments allows them to adjust their diets when the need arises.

Usually, they feed on almost anything they can get their paws on as long as it’s easily accessible. 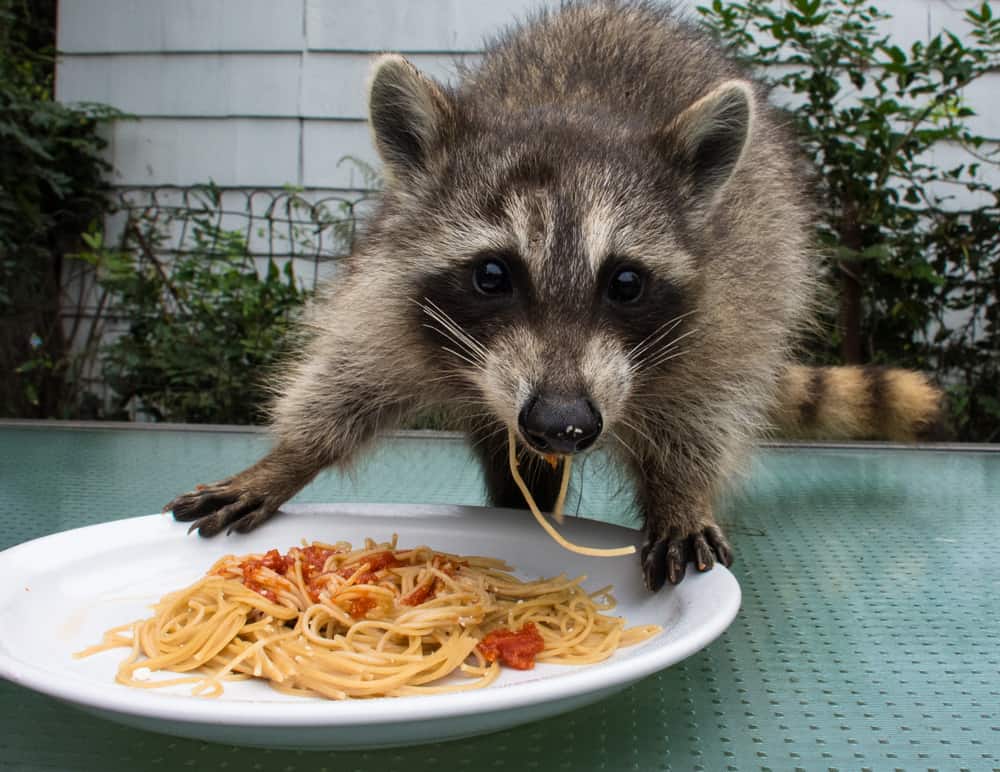 You may ask yourself, “do raccoons have foods that are detrimental to their health?” Well, yes. Like other animals, a lot of foods that humans enjoy are harmful to these creatures. Most of these include junk foods.

Raccoons, like other omnivores, are susceptible to disease or death caused by a variety of foods. These foods include cocoa, coffee, chocolate, onions, garlic, other spices, avocados, guacamole, processed sugars, macadamia nuts, and raisins.

Therefore, when feeding raccoons, kindly avoid giving them these substances that are harmful to their health. Ensure trash is taken out on collection day to prevent raccoons from eating these foods. 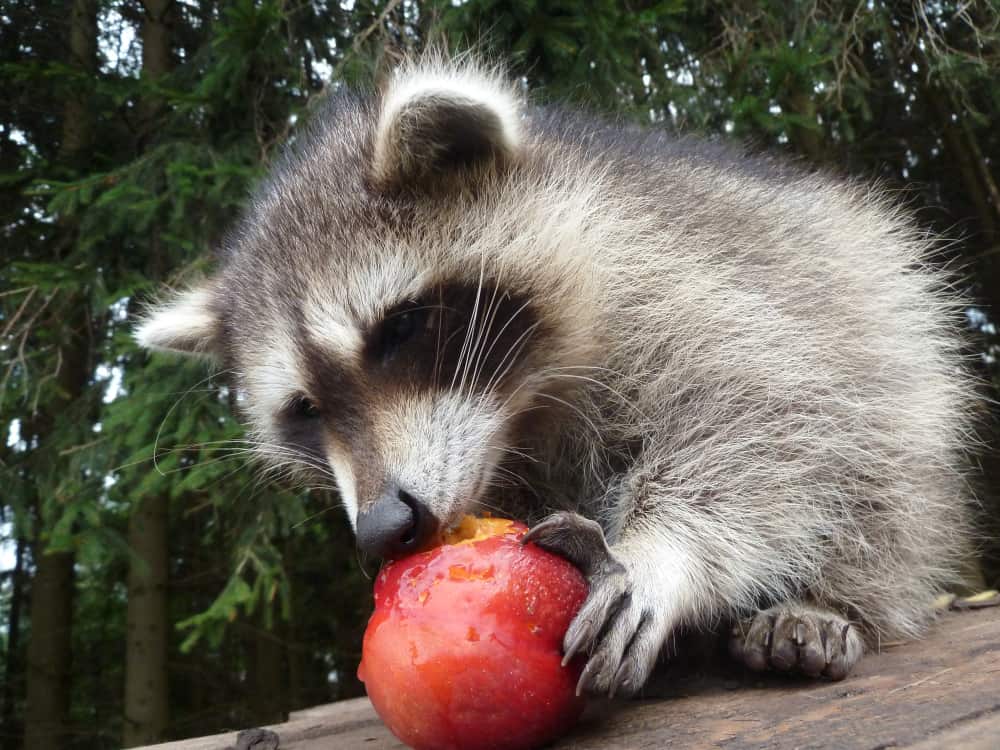 You require an immense amount of knowledge when it comes to feeding raccoons. Why? Because improper feeding of these critters may have dire consequences. The most common being diabetes.

Improper handling may even lead to rabies as raccoons may not bark, but they do bite. According to Centres for Disease Control and Prevention, they are primary carriers of the rabies virus. So avoid feeding them directly with your hands.

Aside from being known menaces to society, the “masked bandits” can thrive in whatever environment they inhabit. They are well equipped to haunt, forage and even rob if necessary to sustain their survival. And this is because of their capability to adapt and adjust their diets accordingly.

28 thoughts on “15 Things Raccoons Like to Eat Most (Diet, Care & Feeding Tips)”