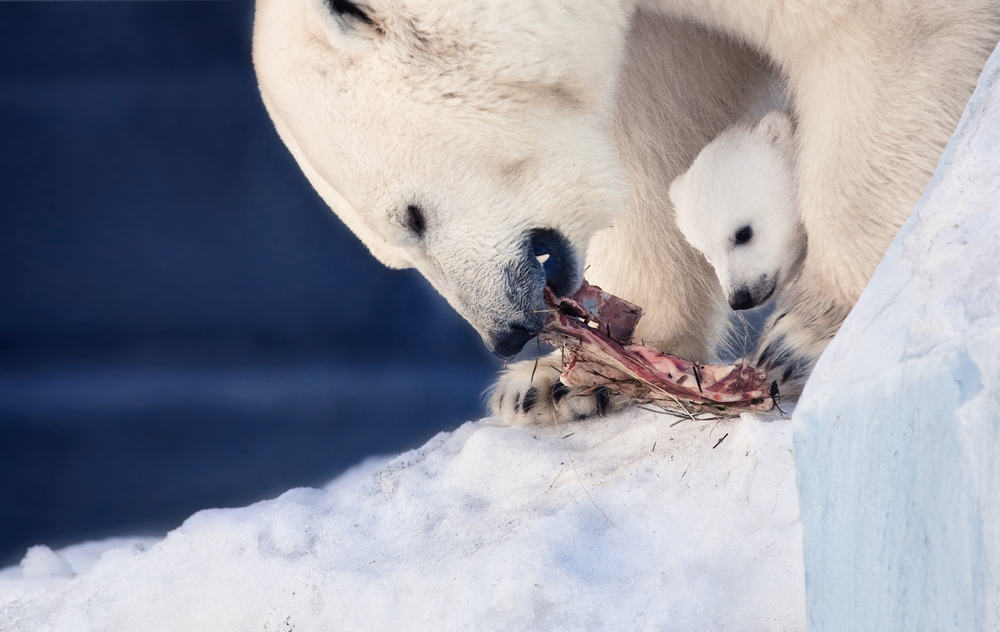 The beautiful polar bear is one of the most distinctive animals in the world. It’s also become an emblem of the dangers posed to our planet by climate change.

If you want to know more about these incredible creatures, you’ve come to the right place. What do polar bears eat? How do they find their food? And how do they survive in the tough Arctic conditions where they live?

We’re going to find out the answers to all those questions and more! 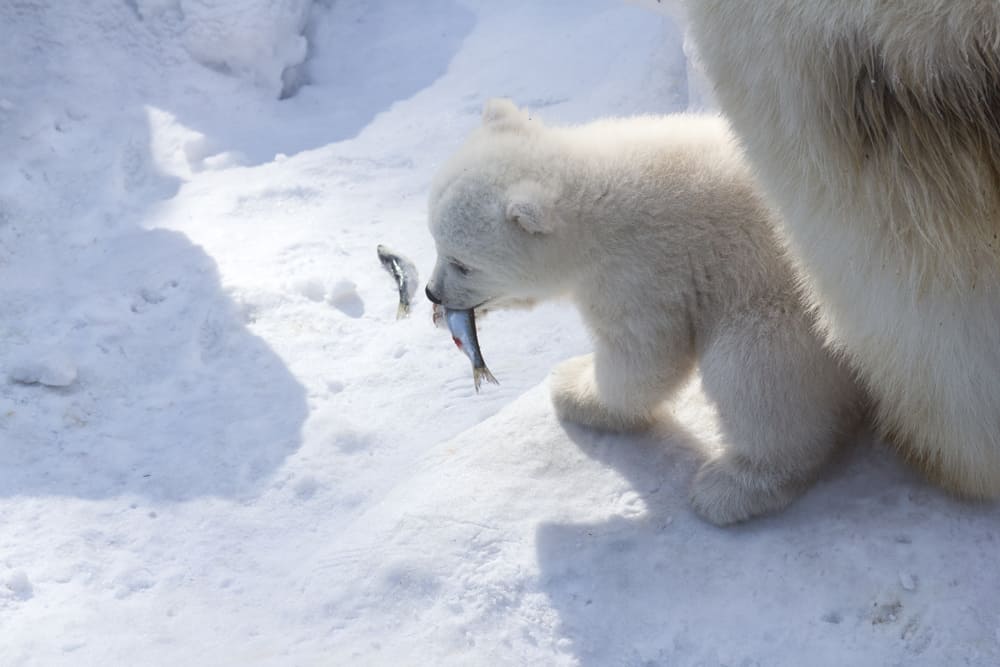 The polar bear – or Ursus maritimus, to give it its Latin name – is the world’s largest land-dwelling carnivore. It stands over 5 feet high to the shoulder. The body is usually between 7 and 8 feet long, but can be up to 11 feet.

Adult male polar bears can weigh anything between 800 and 1,430 pounds. The females are smaller, weighing between 660 and 770 pounds.

Although still imposing animals, their average size has declined during the twentieth century. This may be a result of shrinking pack ice inhibiting their ability to find food.

The global population of polar bears is somewhere between 22,000 and 31,000. The majority, around 60 per cent, live in Canada. The rest live in Greenland, Alaska, Russia, Norway, and on the pack ice of the Arctic.

They usually live in coastal areas, and if living on pack ice they stay within 200 miles of land. They are easily identified by their coat, which varies from pure white through to yellow tones. Beneath their fur, however, their skin is black, helping them absorb the heat of the sun.

Polar bears are well insulated, with a thick layer of fat beneath their skin. This also helps them to survive during periods when food is scarce. They have sturdy legs, and large feet with webbing between their toes. This acts as a natural snow shoe, helping them keep their footing on the ice.

Female polar bears generally give birth to their young in January. They remain with them in dens until March or April. This is the only time polar bears live in dens, and the warmer temperature is essential to the survival of the cubs.  A den can be a full 38 degrees Fahrenheit warmer than the conditions outside.

This YouTube video from Discovery UK shows a mother and her cub emerging from their den in Spring.

What Do Polar Bears Eat in the Wild?

The amount of food polar bears eat varies widely according to the time of year.

They eat most when food is abundant, between late April and early July. They can then eat as much as 2 kilograms per day. And at the end of a fruitful hunting season, they can weigh 50 per cent more than they will at the end of winter.

This accumulated fat helps polar bears to survive during the harsh winter months. During this time, they can fast for up to four months. To do so, their bodies enter a type of hibernation state over a period of between seven and ten days. They can do this whenever food is in short supply.

As this YouTube video from the Smithsonian Channel shows, polar bears will exploit all sources of food. Let’s find out more about what they eat.

An adult ringed seal weighs somewhere between 90 and 150 pounds. That makes them a convenient size for the polar bear to manage.

Younger polar bears may, however, scavenge the remains of kills. And they may be able to find a pup or smaller bearded seal.

The polar bears will harass the whales until they tire. A large, strong polar bear can then drag a beluga onto the ice. There it will become a meal for the hunter, and a host of other animals who will devour the remains. 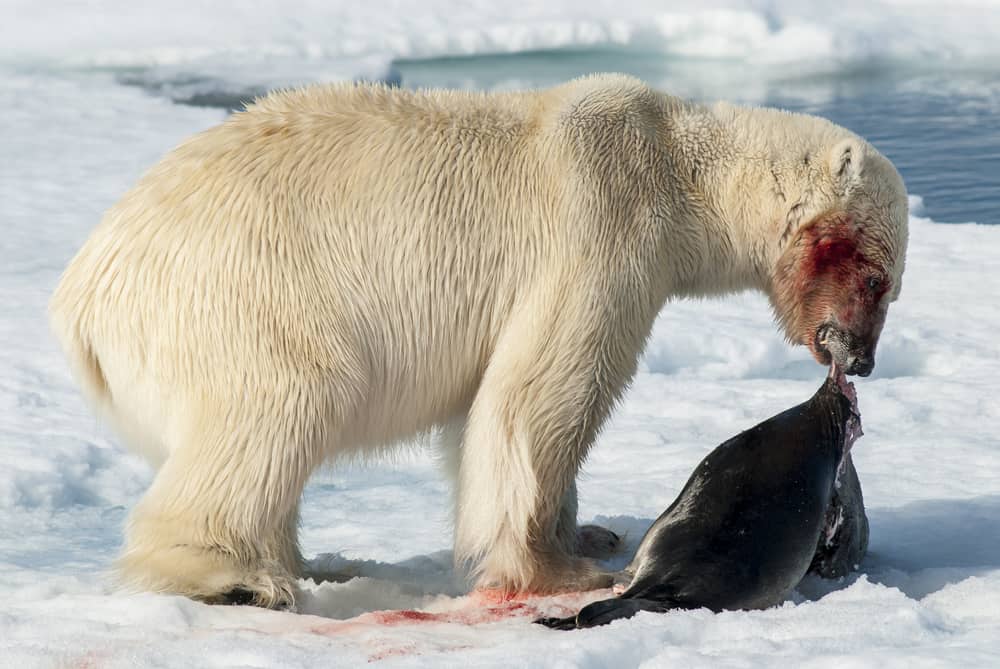 1. Their existence is under threat

Climate change and exploration by the oil and gas industries are threatening polar bears’ survival in many areas.

Polar bears are divided into nineteen different groups, depending on where they live. These groups are known as subpopulations.

Of the nineteen groups, there is enough data on ten to assess how they are coping. In four groups, polar bear numbers are declining. In five, they are stable. And in one group, numbers are increasing.

2. Most polar bear hunts are unsuccessful

Hunting is a tiring process for polar bears, and in most cases, it isn’t successful. Only about 1 in 50 polar bear hunts ends in them capturing their prey.

That’s why scavenging is also an important source of food. And it’s why they store up fat whenever possible, to see them through to their next meal.

Female polar bears in particular can fast for exceptionally long periods of time. Pregnant females will fast before they enter their den, and while they are in it. Average fasting periods are between 180 and 186 days, but can be as long as 240 days.

Polar bears can swim for days at a time, and at speeds of up to 6 miles per hour. Their large front paws propel them through the water, while their hind legs act like a rudder. This YouTube video from BBC Studios shows a male polar bear in action.

The shrinking pack ice means polar bears are having to swim for longer distances to find food. They have recently been found as far as 60 miles from the shore.

Adult polar bears live solitary lives. They come together only to breed, or when there has been a large kill. And a mother will form a family group when she is raising her cubs.

Young cubs will, however, play together. And polar bears have been known to play with chained sled dogs too, despite them theoretically being their prey.

5. Females can delay getting pregnant

One of the remarkable abilities of the female polar bear is to delay gestation. Polar bears usually breed in the late Spring, but the resulting embryo doesn’t immediately implant in her uterus. That won’t happen until the female reaches a target weight of about 490 pounds.

That usually takes place in early autumn, after a summer of feeding. It means the mother is in the best possible physical condition to carry and give birth to her young. If she doesn’t reach the target weight, the embryo is simply reabsorbed into her body.

As long as the embryo has successfully implanted, the mother will give birth in the middle of winter. Most often, she will have two cubs, but numbers can vary from one to four. She will stay with her cubs in the den until Spring. And her young will remain with her until they are about 2 ½ years old.

Polar bears evolved from brown bears around 150,000 years ago. The two species can interbreed, and in 2006, genetic testing confirmed the existence of a hybrid. This is known as a grolar or pizzly bear.

Because the polar bear is usually the mother, grolars tend to be raised and to behave as polar bears. In appearance, they’re a mixture of the two species. They have cream or tan fur, medium length claws, a thin polar-like snout, and muscular grizzly bear shoulders.

That brings us to the end of our answer to the question of “What do polar bears eat?” We hope you’ve enjoyed finding out more about these magnificent animals along the way.

Climate change and the search for fossil fuels is threatening the habitats of polar bears. Check out wildlife conservation organisations to see how you can play a part in helping them survive.