Orangutans are a beautiful species that have captivated millions around the world with their beauty and brightly coloured fur. Many name them as being their favourite animal, but you may not be aware of their diet and habits, both in captivity and in the wild.

Do you want to learn more about this amazing animal? Today, we will look in depth at what orangutans enjoy eating, what they like to drink, what baby orangutans need to eat, and answer some frequently asked questions. 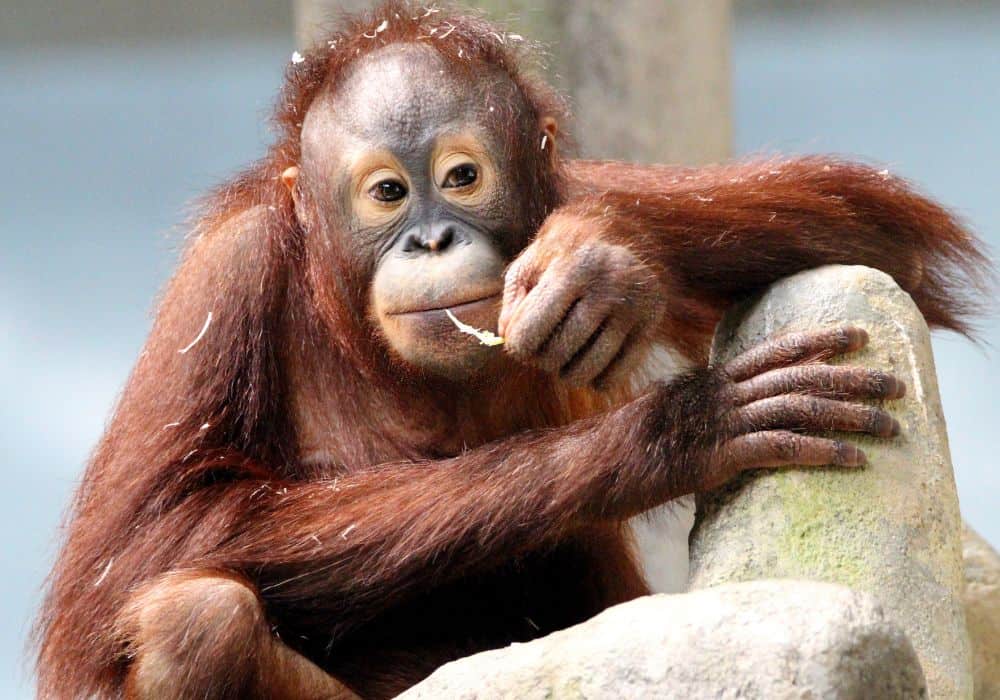 They all come from the same geographical area, in the islands around Indonesia, Malaysia, and Singapore, but their habitat has shrunk in the last 10000 years as they used to be found in Southeast Asia and China. The life expectancy of a wild orangutan is around 50 years.

The first two species are named after the islands they originate from– Sumatra and the island of Borneo, whereas the Tapanuli orangutan was discovered in North Sumatra in the regency of Tapanuli in 2017 (A regency is similar to a county in the USA).

Orangutans have orange or red fur that distinguishes them from other primates. Some male orangutans can weigh up to 200 pounds or almost 100 kilograms, and the habitat of all wild orangutans is in a tropical lowland rainforest, where they use vegetation to make nests.

Some male orangutans also possess flanges or cheek pads as well as a throat sac that helps them attract attention through loud vocal ‘long calls’. These orangutans are more likely to successfully breed, but it is possible for an unflanged male to suddenly develop flanges.

The name orangutan comes from the Malay language and translates to ‘man of the forest’. Though they prefer to be alone, there is some dispute about the proper name for a group of orangutans. One is a ‘buffoonery’, and the other is a ‘congress’.

The main differences between Sumatran and Bornean orangutans are as follows:

Orangutans make a big contribution to the botanical conservation efforts of various plants and fruits because they help to disperse their seeds around the forest via their faeces that then take root and grow successfully in their new environment.

What Do Orangutans Eat? 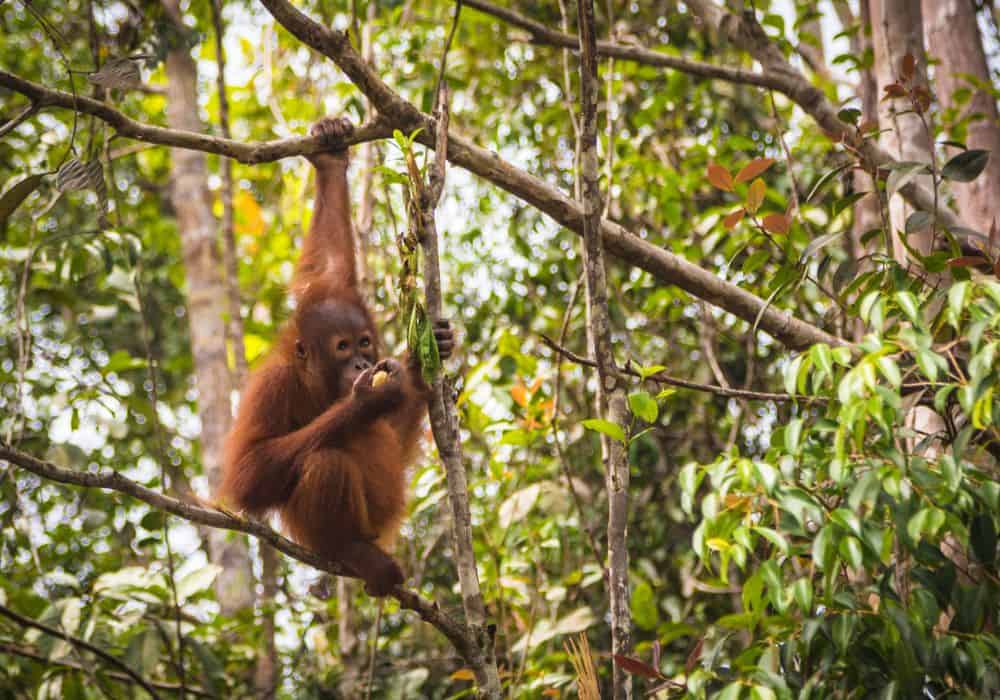 An orangutan’s diet is largely made up of different fruits, vegetation, and plants, but they class as omnivores as they can sometimes eat small insects and animal products such as birds’ eggs thanks to their sharp teeth.

A comprehensive list of foods they eat is as follows, as per Kidadl:

An orangutan’s diet will have a 90/10 ratio of fruits and vegetation, and insects/animal products. It is highly unlikely for an orangutan to eat something unusual as they are highly intelligent and picky with what they eat.

They can usually discern whether or not something is familiar and if it is likely to give them a stomach upset. If they did feel unwell, some orangutans have been known to seek out plants known for their medicinal properties to eat to make themselves feel better.

What Do Orangutans Drink? 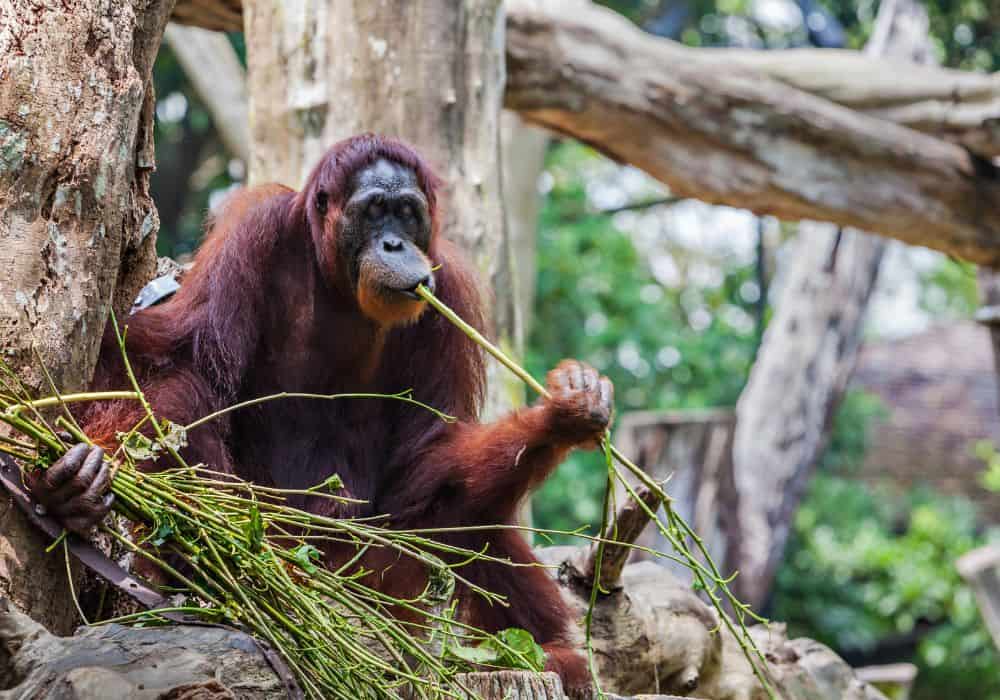 Orangutans mainly drink water sourced from rivers, streams, and the rainwater collected within tree holes. Water can also be consumed via the plants that they eat as there will often be water present within fresh foliage and young shoots.

Their fruit-based diet also provides them with a source of hydration due to the natural juices within each fruit. It is high in sugar and can be bad for their dental hygiene, but other than that it appears to have no other detrimental effect on them.

What Do Baby Orangutans Eat?

Baby orangutans feed on their mother’s milk for the first few years of life. They stop around the age of seven, or alternatively if their mother becomes pregnant again before that and cannot sustain two at the same time.

Once they are weaned, they are taught to forage with their mothers. This process teaches them the best spots to look for berries and other foods, as well as how to identify safe foods to eat and which ones to avoid.

Once they are fully weaned, they are considered to have reached maturity and become an independent member of the group, able to find food, help the other orangutans, and begin to mate.

A video of a baby orangutan learning to forage can be found here, thanks to Seneca Park Zoo.

Orangutans have a couple of unique methods that allows them to ensure they have a steady supply of food, as well as ways they eat the food itself.

In conclusion, orangutans eat a wide range of foods such as:

We hope you have enjoyed reading this article! If you have any further questions or comments, please leave them below and we will get back to you as soon as possible.

How Many Orangutans are Currently in the Wild?

Orangutans are considered to be a critically endangered species. There are 104700 Bornean orangutans, 13846 Sumatran orangutans, and 800 Tapanuli orangutans left in the wild. There are conservation efforts ongoing by the WWF to try to preserve each species.

The Tapanuli orangutans are named as the most endangered out of all the great apes despite being the most newly discovered.

What is the Orangutan’s Main Predator? 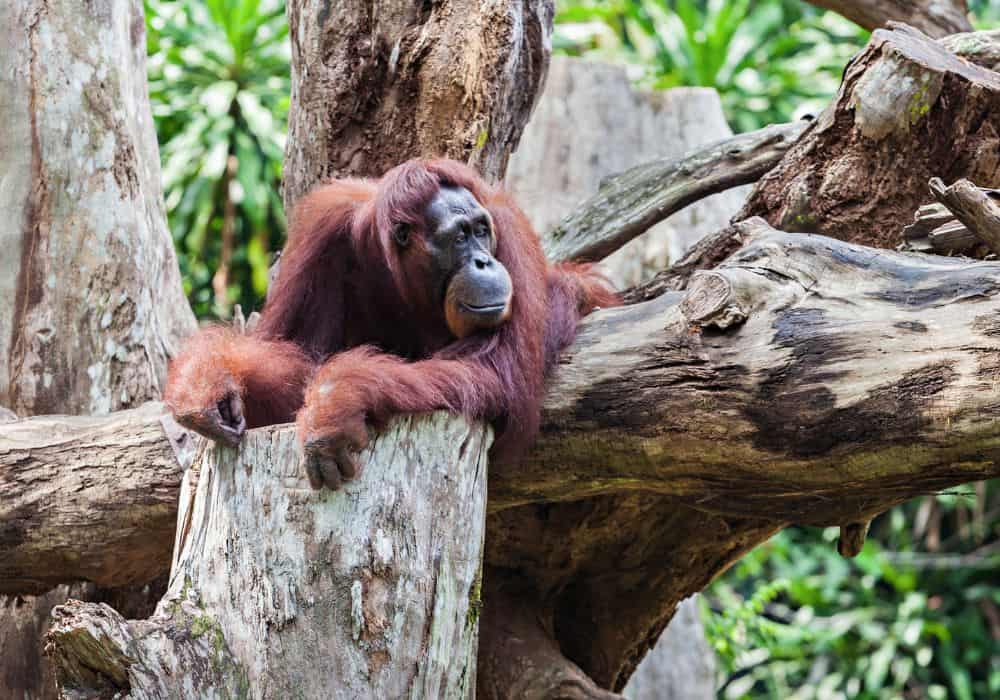 The main predators of an orangutan are humans, especially when they are in their native habitats. They act as prey for some animals higher up in the food chain too, but humanity has done more to reduce their numbers than any other living being.

They have been hunted and killed to stop them from eating valuable crops in the area. The other big threat humanity poses to the orangutans is through the process of deforestation. Deforestation occurs when trees have either been irreparably damaged or more space is needed to build on.

Taking away their habitat means that they either have to move to find a different place to live where they can still access everything they need to survive, or accidentally ends up killing them in the process of cutting the trees down.

What is an Orangutan’s Favourite Fruit?

An orangutan’s favourite fruit is reported to be a durian. They are small, green, prickly fruits that are native to Southeast Asia and grow on trees, but they have a repulsive scent that has been compared to the smell of death or rotting matter.

Despite this, they have a high nutritional value, a creamy texture once the skin has been removed, and taste surprisingly sweet. Some say it tastes like garlic, chives, caramel, and whipped cream all at once.

How Much Do Orangutans Eat Daily?

Orangutans eat a variety of different foods each day and spend an average of six hours in 24 eating. Much of the time is spent foraging for food too, as that can be time-consuming in itself.

Their main go-to foods are fruits, and these are so nutritious that they often don’t need more than a few medium sized pieces a day to feel full or satisfied with the amount they’ve had.