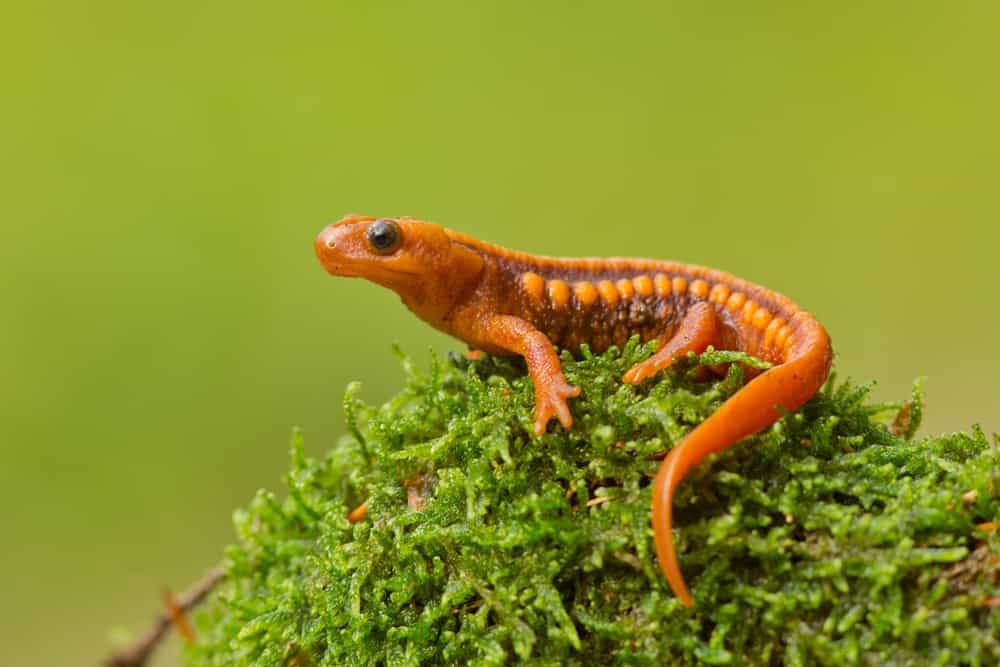 Newts are a semi-aquatic species of salamander that resemble a cross between a frog and a lizard. These amphibians look like frogs with their moist, silky skin, but have a lizard-like lengthy tail. Newts spend the winter underground, near tree roots, and in crumbling buildings. The species that you are most likely to discover in your garden pond is the smooth newt, sometimes referred to as the “common newt.”

There are several fascinating traits that newts have. According to Wikipedia,  the scientific name of the smooth newt is Lissotriton Vulgaris. Lisse means smooth in Greek, and triton refers to Triton, the Greek god of the sea. The Latin term Vulgaris means common. Eft is the name for a young newt.

Their habitat is spread all over the world, from North America and Europe to Asia and North Africa. They can live on land, as well as spend their entire life in water.

An incredible process is the way their mating process works. LiveScience says the male releases a potent pheromone to entice the females. After that, the male newt does a little dance with its tail.

The toxins they release through the skin could kill a human, even though they appear harmless. Newts also have the incredible ability to grow back Injured limbs and organs, and this helped studies on regeneration in medicine. 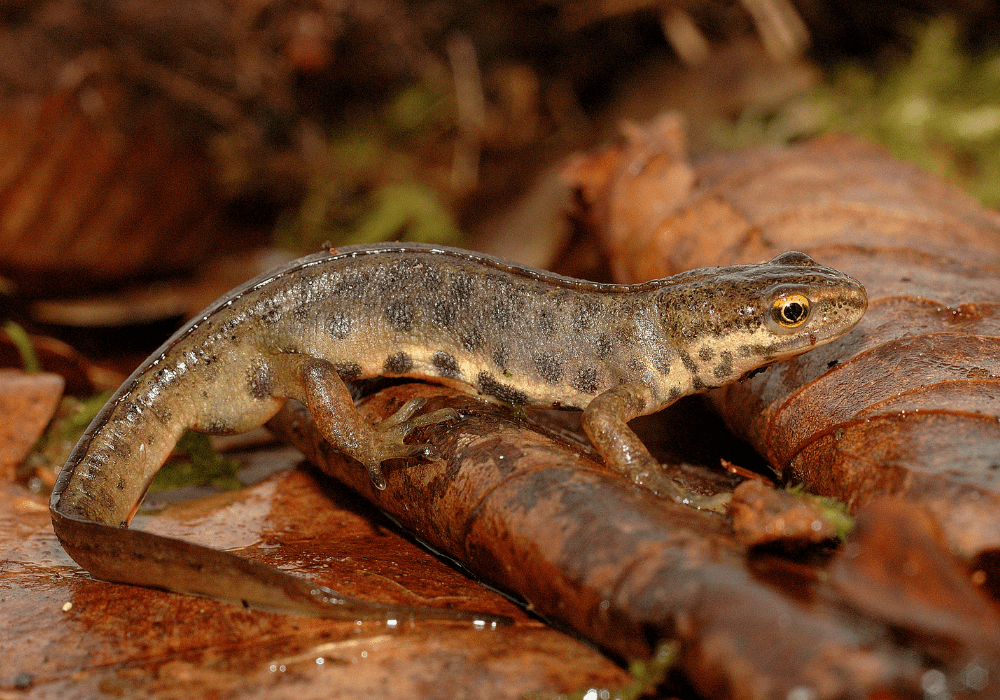 Newts are shaped like lizards, and they have long tails. They are tiny creatures, measuring between 7 and 8 inches long and weighing less than 0.37 ounces. Though certain species have rough, grainy skin, the majority have smooth and moist skin. While the majority of species of newts still have gills and are entirely aquatic, some breathe through their lungs Common newts are brown or olive green in color with vivid orange and black spots on their belly.

They take advantage of these colors to use them as camouflage so that predators won’t detect them. According to Caudata, their vivid colors signal they are dangerous and shouldn’t be touched or eaten.

One of the most toxic amphibians in America is the Californian Newt, and their rough, dark bodies that help them camouflage, as well as their bright, orange underside.

The semi-aquatic creatures known as newts are widespread throughout the northern hemisphere, from America and Europe to northern Africa and Asia. For reproduction, they spend a portion of the year in the water and the remaining time on land. When they live on land, newts inhabit moist environments with lots of covers, like logs, boulders, or burrows. Some species can be found in slow-moving rivers, but you will find most of them in static water areas like ponds and ditches.

What do newts eat in the wild? 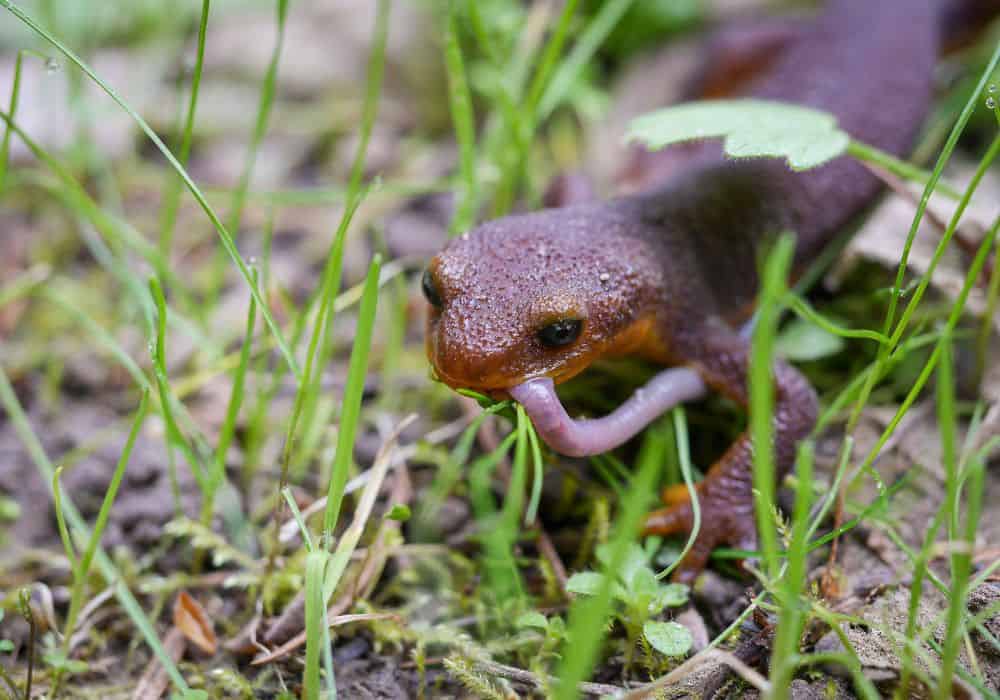 Newts are carnivorous creatures. They consume a variety of invertebrates, including beetles, earthworms, tadpoles, slugs, and frog eggs. They can swallow their prey whole and emerge at night to hunt for food. Baby newts will eat tiny shrimp and insect larvae that they come across while swimming.

How do they hunt their prey?

Newts use both aggressive and passive foraging techniques to hunt on land – actively seeking out or looking for their prey.

The traditional ambush strategy is the passive “sit and wait.” Any prey that the adults can swallow will be consumed. They use their sticky tongues to catch morsels and other invertebrates that attach to them.

Newts have to catch their prey differently when living underwater. Although they lack teeth in the conventional sense, they do have plates in their jaws to grasp their prey. They do not require sharp teeth for ripping the prey because they swallow it whole. Newts grip the soft bodies of ramshorn and snails before shaking their heads quickly to get the animal out and eat it.

What do newts eat in capacity? 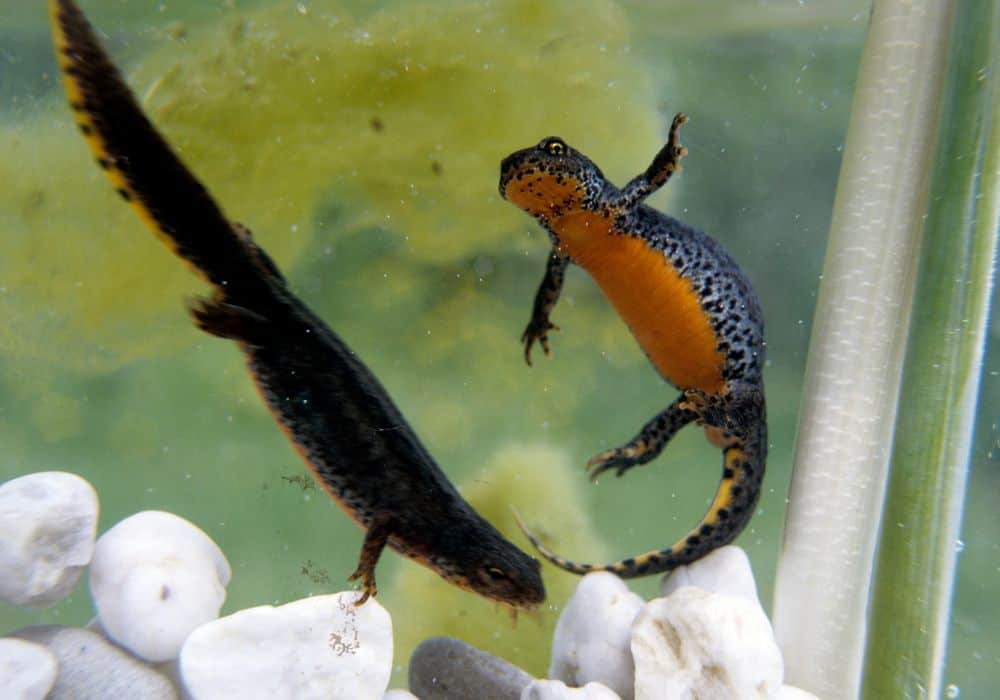 If newts have picked your interest and you take into consideration getting one of these tiny amphibians, you must first know how to feed them. They have a similar diet at home as their one in the wilderness. They can be fed insects, worms, slugs, and invertebrates. Mollusks, shrimp, tadpoles, various aquatic insects, and larvae are preferable options for feeding newts in water. The young newts prefer tiny shrimp and larvae. Caudate suggests live food over frozen and frozen instead of dried insects. To make sure their diet is complete, you can add supplements such as calcium to their food.

You can find the best food for them in pesticide-free yards, at bait shops, pet stores, or any outdoor space that has bugs. Large newts can sometimes be treated to frozen/thawed pinkie or fuzzy mice. If live food isn’t easily accessible, you should feed the newt with a high protein diet consisting of fish parts, kidneys, liver, and lean meat. To get a picky newt to eat more, www.acuariopets.com suggests putting the live food in front of the newt and wiggling it until it gets it.

Tips for taking care of newts

With a little research, newts are easy pets. You need to make sure you purchase healthy ones and give them the right temperature and food. But chilling your newt to the proper temperature has a very pricey, but key role, as the most widespread species of newt is very heat-sensitive.

It’s important to remember amphibians aren’t the type of pets you can play with, and this might not make them right for kids. They should not be left alone, especially since they can be toxic.

When it comes to their living habitat, you should know these amphibians prefer a semi-aquatic terrarium in which land and water are separated. The water level there can be deep, but don’t forget to add resting areas such as bark, platforms, or plastic plants.

Aquariums filled with live plants are the ideal environment for newts. Intricate settings make the experience more exciting for both newts and their owners while also contributing to the water cleanliness. The best substrate is round and smooth gravel that can’t be eaten.

Because of their porous skin, newts can absorb dangerous toxins from the water. The best way to ensure their health is to always have a pH test kit.  A pH of 6.5 to 7.5 is generally favorable for newts. The Ammonia levels in the tank should always be checked, as the substance is toxic to newts. Any water used must be free of chlorine and chloramine.

Keep the usual habitat humidity at 70% by spraying it with dechlorinated water. If it becomes too wet, provide better ventilation. A great trick is to give your pet access to a shallow basin of dechlorinated water so they can soak in it when they feel dehydrated.

Cohabitants in the tank

Even if they are usually presented as great pets to add in fish tanks, newts don’t like the warm water and don’t eat fast enough. You can add fish such as guppies to your newt tank, who adapt well to cool water and eat the same food. You should not have too many adults, as they start fighting over the food.

How often do newts eat?

According to www.petco.com, give your young newts food every day and adult newts every other day. If they don’t eat the food within 10 to 15 minutes, try to clear it because it will harm the water’s condition.

What are the differences between newts and salamanders?

Because the terms “newt” and “salamander” are frequently used together, people might mistake these two different amphibians. However, there are differences between them. The straightforward explanation is that while not all salamanders are newts, all newts are salamanders.

The majority of newts have paddle-like tails and webbed feet. The tails of salamanders are longer, more rounded, and have well-developed toes for digging in the ground.

The skin of a salamander is wet, smooth, and shiny, but the skin of a newt is rough and seems covered in warts.

Salamanders spend primarily terrestrial lives as adults, except for breeding season and laying eggs, whereas newts live semi-aquatic to aquatic life. In contrast to salamanders, which continue to breathe via their skin throughout their whole lives, newts build lungs as they grow.

And if you need to see real examples, the above video showcases the differences between the two species with photos.

This article went over newts, their way of life, and their diet. Newts are carnivorous animals that eat all kinds of creatures, from insects and worms to small crustaceans, tadpoles, water snails, and shrimps. Newts make entertaining pets and are relatively simple to care for. They must be properly cared for to remain healthy. Setting up the appropriate aquarium and proper feeding are the finest ways to care for your newt.