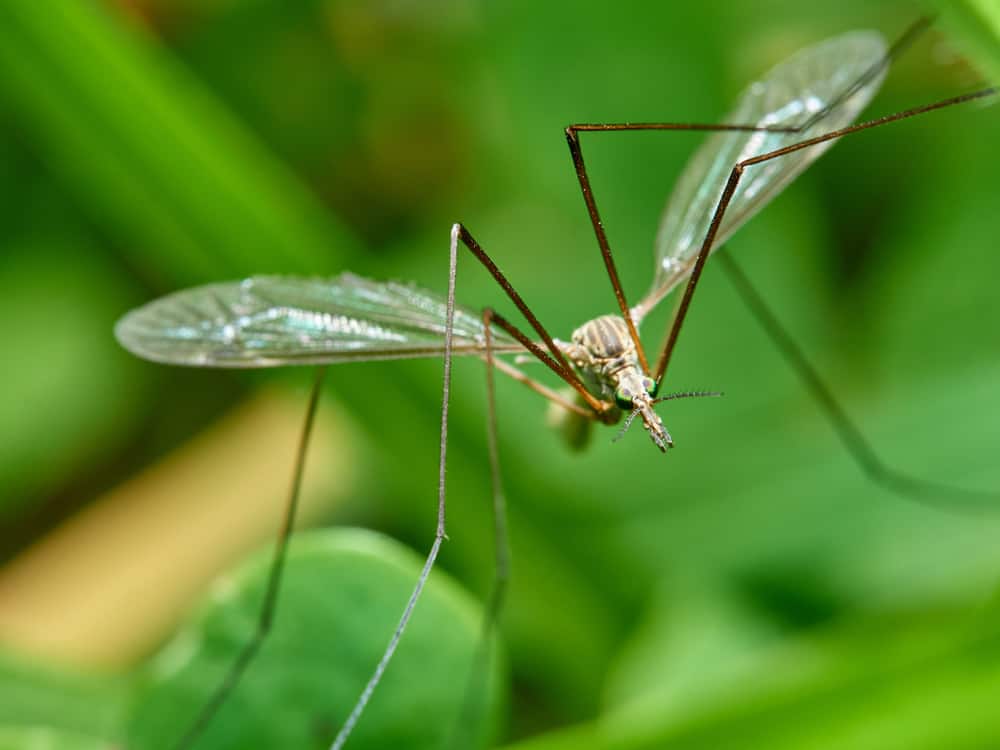 Read on to find out not just what mosquito hawks eat, but what they actually are and how to identify them. In the end, we also address some popular misconceptions about mosquito hawks.

Many of these nicknames show just how many false beliefs there are about mosquito hawks. We have already established that it is a common misconception that they are mosquito eaters, yet people still use that name in many areas.

Daddy longlegs is another common name for mosquito hawks, even though they are not spiders. A spider with long, spindly legs, which are like the legs of mosquito hawks, is called daddy longlegs. From a distance, it can be easy to confuse the two, but the big difference is that one can fly and the other can’t.

What is the mosquito hawks’ habitat?

You can find mosquito hawks in all regions of the world except for the polar regions. In warmer areas, they can be seen all year round, but in the colder regions, they emerge in the summer. They live in areas with plenty of water and vegetation such as ponds and wetlands.

Mosquito hawks, like moths, are drawn to light, which is why they often find their way into houses. When that happens, they usually bounce repeatedly against walls or ceilings, looking for a way back out.

How to identify mosquito hawks?

They have a body reminiscent of a mosquito and legs like a daddy longlegs, but what are the features that will help you tell a mosquito hawk apart from other insects, or indeed daddy longlegs?

Mosquito hawks, which in fact are a type of fly, have tiny hind wings, just like other flies, that work like gyroscopes that give it stability during flight. Their eyes are broader than the rest of the head and bulbous. Their heads, which are snout-like, end in a bump.

How else do they differ from mosquitoes?

Mosquito hawks do not have stingers. Sometimes the female mosquito hawk’s back can be mistaken for a stinger, but it is actually where they hold the eggs.

The most important difference, and the reason mosquito hawks cannot bite, is that they do not have a proboscis. A proboscis is a mosquito’s mouth. A mosquito has six tiny needles in its mouth that it uses to suck blood.

Click here to find out how to tell mosquito hawks apart from dragonflies and daddy longlegs. 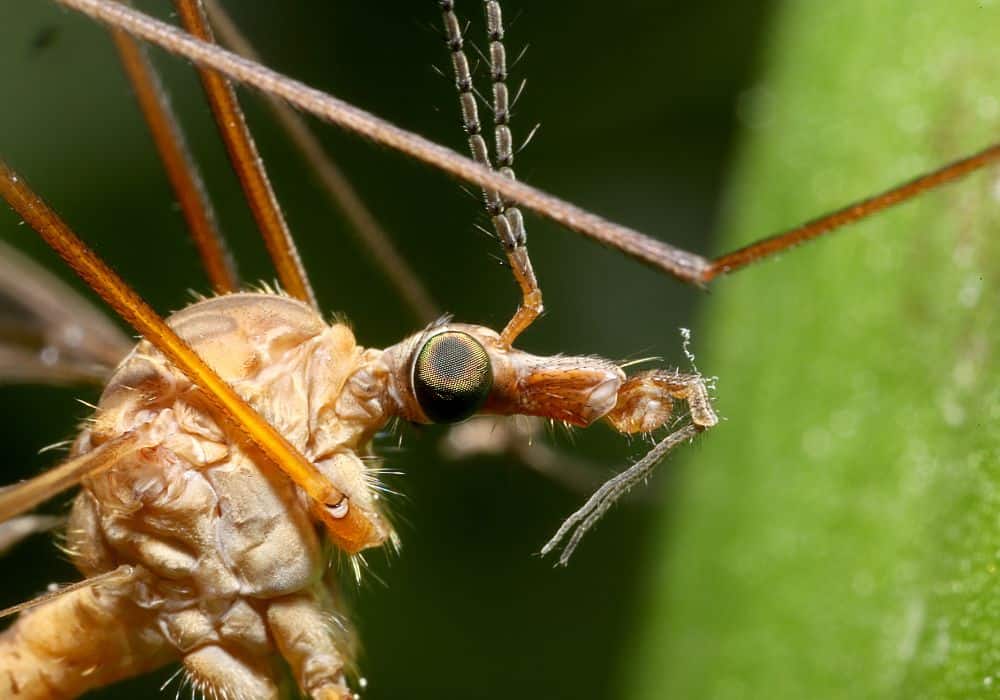 What do mosquito hawks eat?

What makes the mosquito hawks really interesting is that most mosquito hawk species have no usable mouthparts and cannot feed at all. Those species that can feed will only eat nectar from flowers. Instead of eating, the adult mosquito hawk’s main purpose is to find a mate and breed.

The reason they don’t need to feed is that they only live for a very short period. In some species, the males only live 1-3 days. In other species, they live 10-15 days once they have reached adulthood.

What do mosquito hawk larvae feed on?

Unlike adult mosquito hawks, larvae eat a lot. The larvae, often called leatherjackets, can be a problem to farmers because they have a voracious appetite. They can damage plantations and flowers in gardens and fields. So what do mosquito hawk larvae like to eat?

Mosquito hawk larvae eat the roots and crowns of the grass. They begin eating the grass in the fall when they emerge and before they go underground for the winter. They start eating the grass again in the spring when the grass is ready to grow back. Grass damaged by the larvae will be thin and patchy.

The best food for the larvae, from a human viewpoint, is decaying food. Rather than damaging living matter, when they eat decaying wood, they are eating matter that is already decomposing.

Mosquito hawk larvae will also eat fungi, which are found on land, water, and plants. They do not eat airborne fungi. Fungi are sometimes referred to as plants or bacteria, but they are classified in their own category. Fungi get their food by decomposing matter or as parasites eating off their hosts.

Another way mosquito hawk larvae can damage vegetation is by eating the seedlings. If you notice small holes in the leaves of your young plants, they could be caused by mosquito hawk larvae, although other insects and slugs can cause similar damage. The best way to protect your seedlings is to install all-purpose row covers.

Sometimes the larvae’s eating habits can be useful rather than harmful. If the adult female has laid its eggs near algae, then the larvae will eat that. Feeding on the algae can be important in breaking down the organic matter in water.

If your seedlings and plants are looking unhealthy, but there is no damage to the leaves, the larvae could be feeding on the roots. To check, gently lift the plant from the soil so you can examine the roots.

If there are signs of mosquito hawk larvae or other insect damage, discard the damaged plant. You can protect the plant roots with row covers or by releasing rove beetles into your garden. They will prey on larvae and maggots.

To learn more about the mosquito hawk and its larvae’s eating habits, visit A-Z Animals. 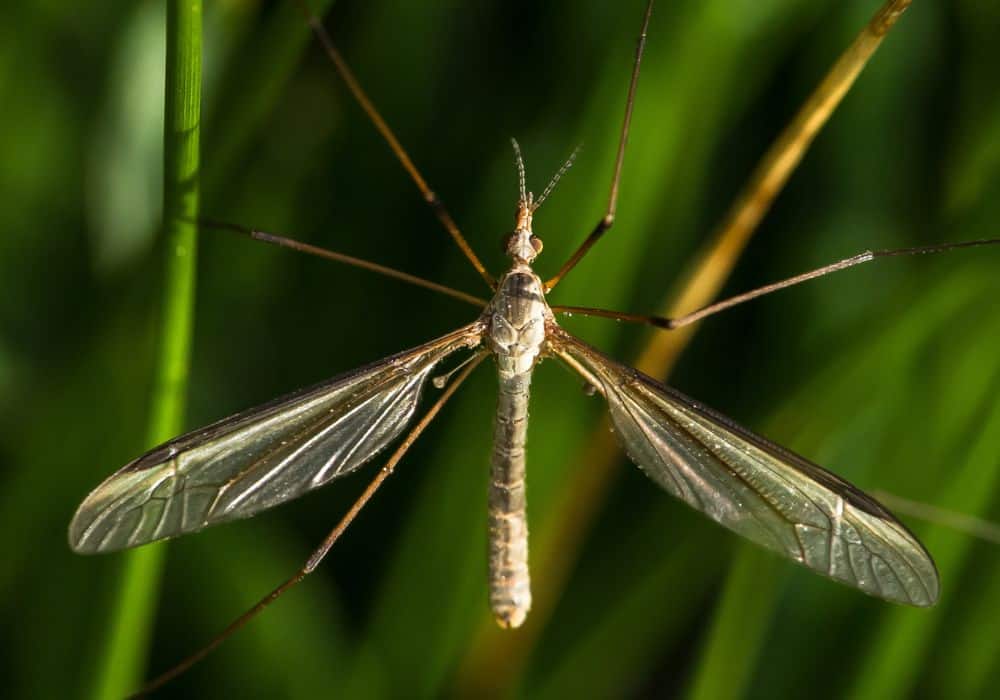 What predators do mosquito hawks have?

Mosquito hawks have many predators. During their short lives, they have to avoid getting eaten before they have mated and laid eggs. The predators of mosquito hawks include:

In addition, the larvae can also get eaten by skunks and moles foraging the ground for food.

Is there a way to get rid of mosquito hawks?

While adult mosquito hawks are harmless and won’t bite, you might still want to get rid of them before they lay eggs in your grass or plants. The adults might only be around for a few days, but the larvae can survive for over a year and cause a lot of damage to the vegetation in your garden. Here are a few things you can do.

Finally, you can get a pest control treatment. Applying a pesticide will help to get rid of both adult mosquito hawks and the larvae. It will also get rid of other insects that can harm your lawn, plants, and vegetables.

For more information on how to get rid of mosquito hawks, read this article from Bob Vila.

You can learn all this and more from this video from Animal Fact Files.

We hope to have cleared misconceptions about mosquito hawks. Next time you see one, you know not to worry about getting bitten by a giant mosquito. However, because the larvae can be harmful to your garden, you still might prefer not to have mosquito hawks around your home.

Hopefully, we have answered all your questions about mosquito hawks, their larvae, their eating habits, and how to get rid of them. But if you have further questions, you can write them in the comments section.