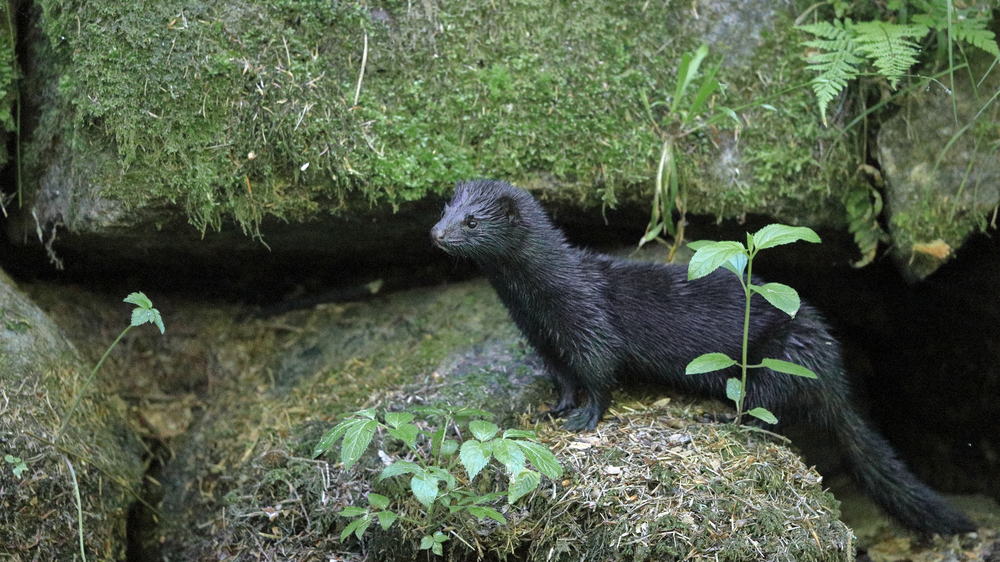 Minks are known for their soft, chocolate-brown fur that has been used in the fashion industry for years. While the majority live in the wild, a good number are kept in captivity for fur farming. But what do minks eat and how is their life in the wild like? Let’s find out! 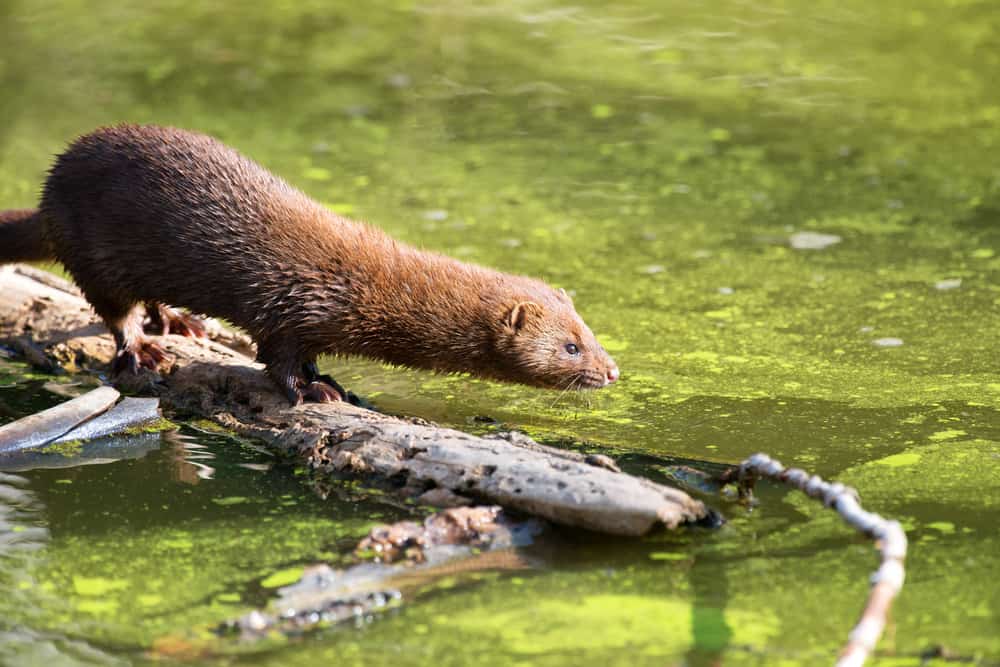 Minks are small mammals closely related to ferrets, ermines, and weasels. They are characterized by their long, slender bodies, short legs, claws, and pointed snouts.

There are two known species of minks – the American mink (Neogale vison)and the European mink (Mustela lutreola). Both species were once classified under the same genus but research conducted afterward discovered distinct differences between the two, which led to them being classified separately.

American minks weigh around 24 ounces and grow 18 inches long on average. Some, however, grow pretty big and can weigh up to 56 ounces and max out up to 27 inches long.

European minks are smaller and the majority don’t usually exceed 25 ounces in weight or 12 inches in length. But a few have been found to be slightly bigger, with a weight of about 26 ounces and a length of 15 inches.

You will find most minks near water bodies such as lakes, ponds, or streams that have trees nearby. These little creatures will build their homes by digging holes on the ground or simply living in hollow trees or logs. They will add leaves, grass, and fur from dead prey to make their homes a little comfortable.

It’s very difficult to see more than one mink in one place. Minks are typically loners and will only come together when they want to mate. Their most active time of the day is the dawn and dusk and will spend most of it looking for food and marking their territory.

Both species produce between 1 and 8 young ones (often referred to as kits). The kits become sexually mature at the age of between 10 and 12 months.

Here is a video that tells you more about minks:

What Do Minks Eat in the Wild?

Minks are carnivores and their diet mainly consists of fresh kills. Though small-bodied, these critters will often target animals bigger than themselves, which can make them a nuisance to homeowners with pets and livestock owners. Minks have proven particularly problematic to poultry ranchers and people with ornamental ponds.

Minks mainly rely on their sense of smell when looking for terrestrial prey. And because they can’t see clearly underwater, most of the marine animals they prey on are spotted from the surface before the minks dive to catch them.

Being seasoned hunters, minks will often bite their prey in the neck to kill them. They will have some of the meal on the spot and bring the remainder to their dens for later.

Watch this video to know more about mink feeding habits:

What Do Minks Like to Eat in the Wild?

Some of the foods that minks love to munch on include:

European minks have also been found to eat vegetation.

How Minks’ Diet Benefits the Ecosystem

Rats and mice are one of the top causes of structural damages in homes, offices, and apartments. By gnawing, defecation, and nest-building, these little critters can damage almost any type of building. They will also feed on any stored food items or dig up and eat newly planted crops. They may carry diseases too.

By preying on rodents like rats and mice, minks help reduce their population, which in turn helps minimize damage to structures, increase food supplies, and prevent rodent-borne diseases.

As mentioned, European minks are also known to feed on vegetation. While plants may not constitute a huge percentage of minks’ diet, even the smallest number can help hinder the growth of invasive plants. 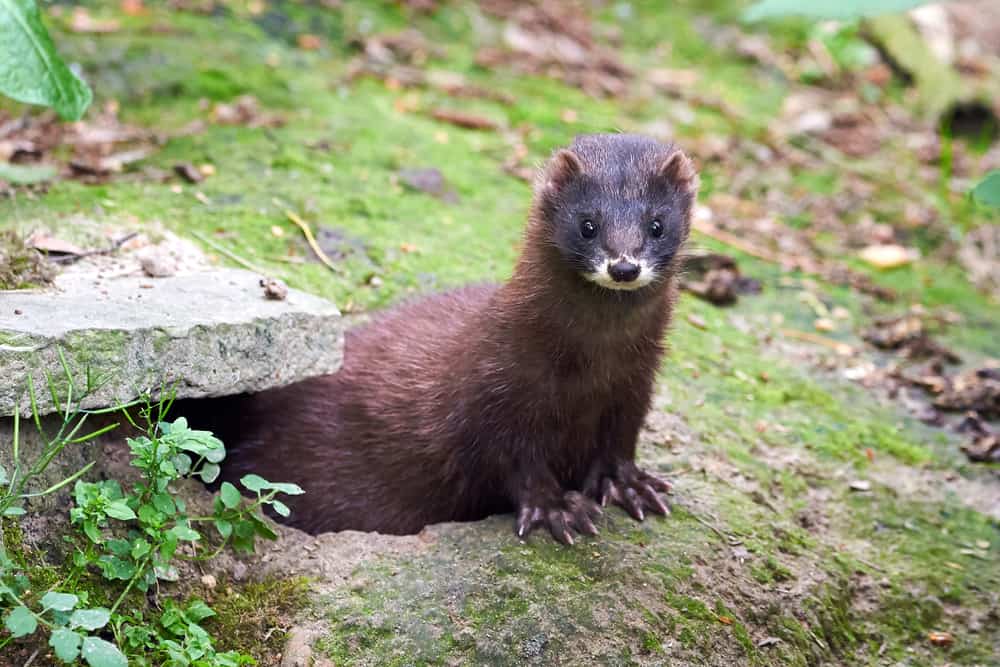 Minks are discreet and prefer to do stuff on their own. You will only find them in pairs or in a group when it’s time to breed.

Those kept in fur farms, however, don’t have the luxury of keeping to themselves, as farmers will store thousands of them in a small cage. By so doing, they deny the animals the personal space they so desperately need, and this often leads to violence and even cannibalism.

2. Minks Use Many Auditory Signals to Communicate with Each Other

While minks don’t make loud noises, they do have a couple ways through which they communicate with each other. They will growl, chuck, screech, squeal, hiss, or even bark when they feel endangered.

They also use odors to inform others about their boundaries or their reproductive statuses, a method commonly referred to as chemical signaling. These animals have an amazing sense of smell, sight, and hearing too, which enables them to stay alert and aware of their surroundings.

Minks usually build numerous dens that they use for eating, resting, sleeping, or storing leftover food. They protect their homes with camouflage and odor secretions. You will see them line the hollows with dried grass and leaves to protect themselves from predators.

When minks settle on a piece of land, they can claim up to 30 miles of it, using odor secretions to mark the territory. In captivity, on the other hand, fur farmers shove these little animals in small cages, minimizing their movement. Those bred primarily for fur, especially, may spend their entire lives without even being let out of the cage.

It can be tempting to catch a wild mink or adopt one from fur-farm rescues for your household, and there is nothing wrong with that. However, keep in mind that minks will require the kind of housing and care you would give a typical wild animal including a pool and a large outdoor enclosure.

A zoo would have the facilities minks need for survival but it’s unlikely a homeowner will be able to adequately cater to these animals’ needs.

Ferrets could be a more viable option; they are enormously entertaining pets. However, they too need plenty of care just like other pets do including litter trays, a large cage, training, a meat-based diet, and undivided attention. If you don’t mind making this commitment, then you could go ahead and keep a couple. They are like a cross between cats and dogs, hence could make lovely pets.

5. Fur Farms Are the Greatest Threat to Minks

Minks are commonly kept in captivity for their fur. There are many different farms all over the world that capture and raise these animals for their fur, and the Animal Diversity Web argues that these are the number one threat to minks’ survival.

In the wild, minks can live up to 4 years, but in captivity, they only live for 6 months, as farmworkers kill them at a tender age for their fur.

Also, because it takes quite a huge number of minks to produce enough fur to do anything, fur farmers use the easiest method to slaughter as many minks as possible. Sometimes they will gas them and other times they will poison or anal-electrocute them.

In some farms, minks are suffocated using carbon monoxide or carbon dioxide, causing them to languish for close to 20 minutes before they die. And because these animals are able to detect when there is insufficient oxygen, they experience severe stress and panic before dying.

6. Minks are Exceptional Swimmers and Climbers

One of the things that perhaps make minks skilled hunters is their outstanding ability to swim and climb. Minks can swim up to 90 feet underwater and leap from one tree to another at amazing speeds.

When minks are confined in small spaces where they are not able to live their active life, they become severely stressed that they can eat anything around them including chewing through their cages. Some have been found to even eat their young ones or mutilate themselves.

Minks’ diet mainly consists of meat. In the wild, they live an active life hunting in water bodies and the surrounding land. European minks have been found to feed on vegetation too, but for the most part, they survive on a meat-based diet. Overall, minks are skilled hunters and will take down prey that is even bigger than themselves.