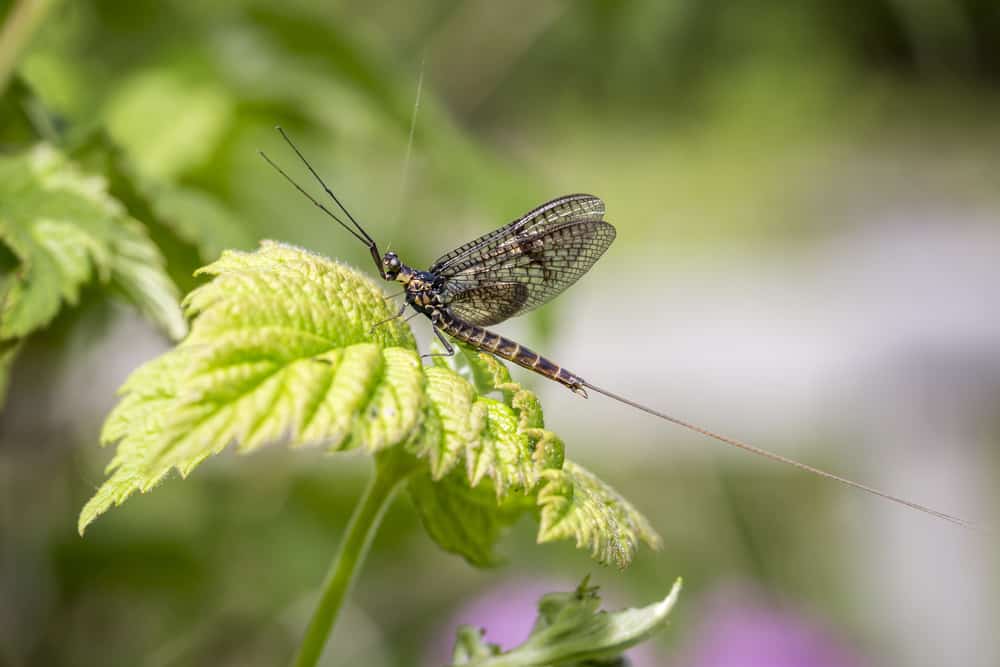 According to a study from Switzerland, mayflies are very diverse. Their physical appearance and behavior adapt easily to a new environment. Does this mean their diet also changes?

In this article, we will provide facts about mayflies and their larvae, what is their diet and what prey on them, their role in the ecosystem, and how they act around humans.

Mayflies have been discovered hundreds of years ago. According to Australian news, these aquatic insects have lived 312 million years ago. This discovery was confirmed when a mayfly landed on mud in a tropical floodplain.

The fossils left were so detailed that you can even see the body segments and claws!

The name mayfly was made because these insects usually emerge in May. According to the Missouri Department of Conservation, the aquatic larvae or nymphs are also known as naiads. For the adult ones, the common names include the following:

In the United Kingdom, mayflies are also known as “up-winged flies” as they look similar to butterflies. 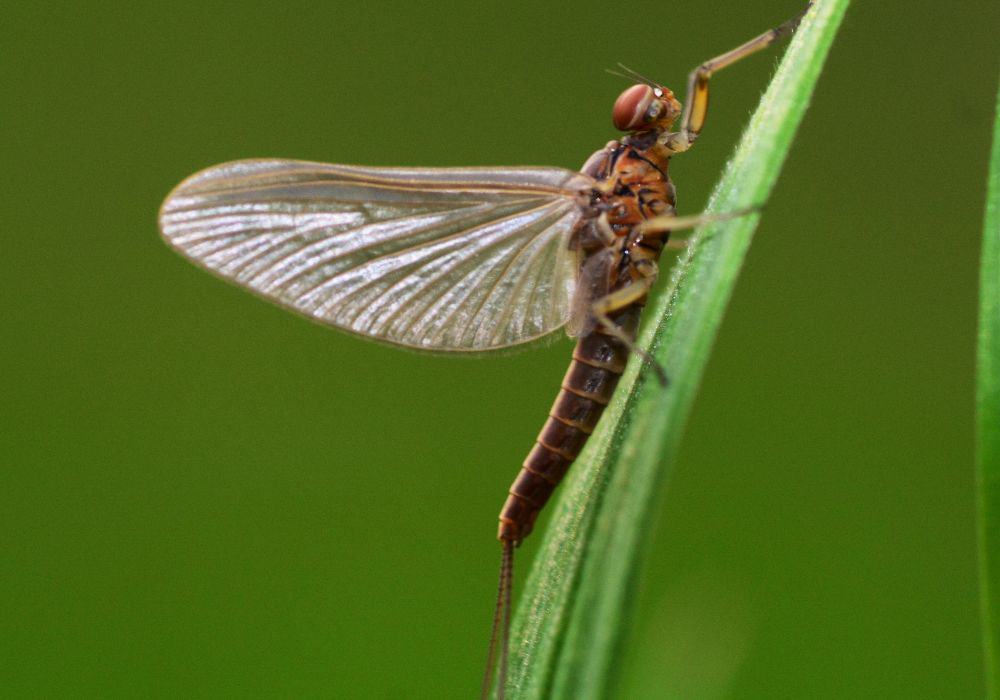 Mayfly nymphs or mayfly larvae look different from adult ones. Their size can be up to ½ inch. Other physical characteristics of naiads include the following:

Furthermore, the size of adult mayflies may range up to 1.1 inches. Their color may vary as well, but, usually, they blend with the color of their environment. Other characteristics of adult mayflies include the following:

The wings of mayflies are similar to butterflies. But, their wings are clear and the lines you see on those wings are their veins.

These aquatic insects prefer forests and woodlands, those that are close to water. When adult mayflies and nymphs gather in freshwater, these swarms become so dense. The natural environment of nymphs includes clear, shallow water or edges of lakes.

Like damselflies, during the nymphal stage, mayflies will shelter in the substrate at a certain depth of freshwater.

There are different species of mayflies and all of them belong to the order Ephemeroptera, meaning “short-lived”.

As of today, more than 2,500 mayfly species have been discovered, and most of them are located in North America, specifically the United States.

Generally, all of these species, especially Ephemera danica, can be seen all over the world, except in the Arctic and Antarctic.

According to the Journal of Insects, 900 of these species are found in the Neotropics. Followed by this are 830 species found in Palaearctic, 610 in Nearctic, 620 in Oriental, 440 in Afrotropical, 250 in Australasian, and 48 in the Pacific.

Before mayflies turn into adults, they will have to undergo 3 phases. Generally, adult mayflies come with a very short lifespan, which is up to 2 days.

Females can produce more than 10,000 eggs. These eggs are deposited into the bottom of freshwaters by several dippings. When these eggs sink into the water, some rest in aquatic plants.

Because of this, before these eggs even turn into larvae, fish already prey on them, making their lifespan very very short.

Those eggs that have survived being preyed on will soon turn into larvae. Also known as nymphs, their developmental stage is referred to as an instar.

Generally, the nymphal period or molt period is up to 1-2 years. However, this may change depending on the species and the temperature of their habitat.

After several months to a year of living underwater, nymphs will proceed to the subimago stage. This is also known as the dun stage. According to a study from the United Kingdom, mayflies will come out of the water and shelter themselves in places nearby.

This is also the stage where mayflies dry their wings. Generally, the average period for this stage is overnight. You will know if this stage is done when mayflies shed their skin for the last time.

During this adult stage, also known as the spinner stage, mayflies will become winged insects. Unlike the other stages, spinners will give them the ability to reproduce. However, this time, they cannot eat or drink, making their lifespan by only up to 2 days.

As soon as mayflies reach the imago stage, mating will begin. According to a study from Brazil, even though the lifespan of mayflies is short, males can successfully breed within just 2 days.

Additionally, males perform their mating flight before dusk. When females become attracted, they will join the dance.

Then, a male mayfly will approach a female one by grasping her thorax using his elongated front legs.

When the male mayfly release the female, eggs will be deposited. Shortly after hatching, the female mayfly will die. Generally, the hatching of eggs will take some days to weeks.

What Do Mayflies Eat? 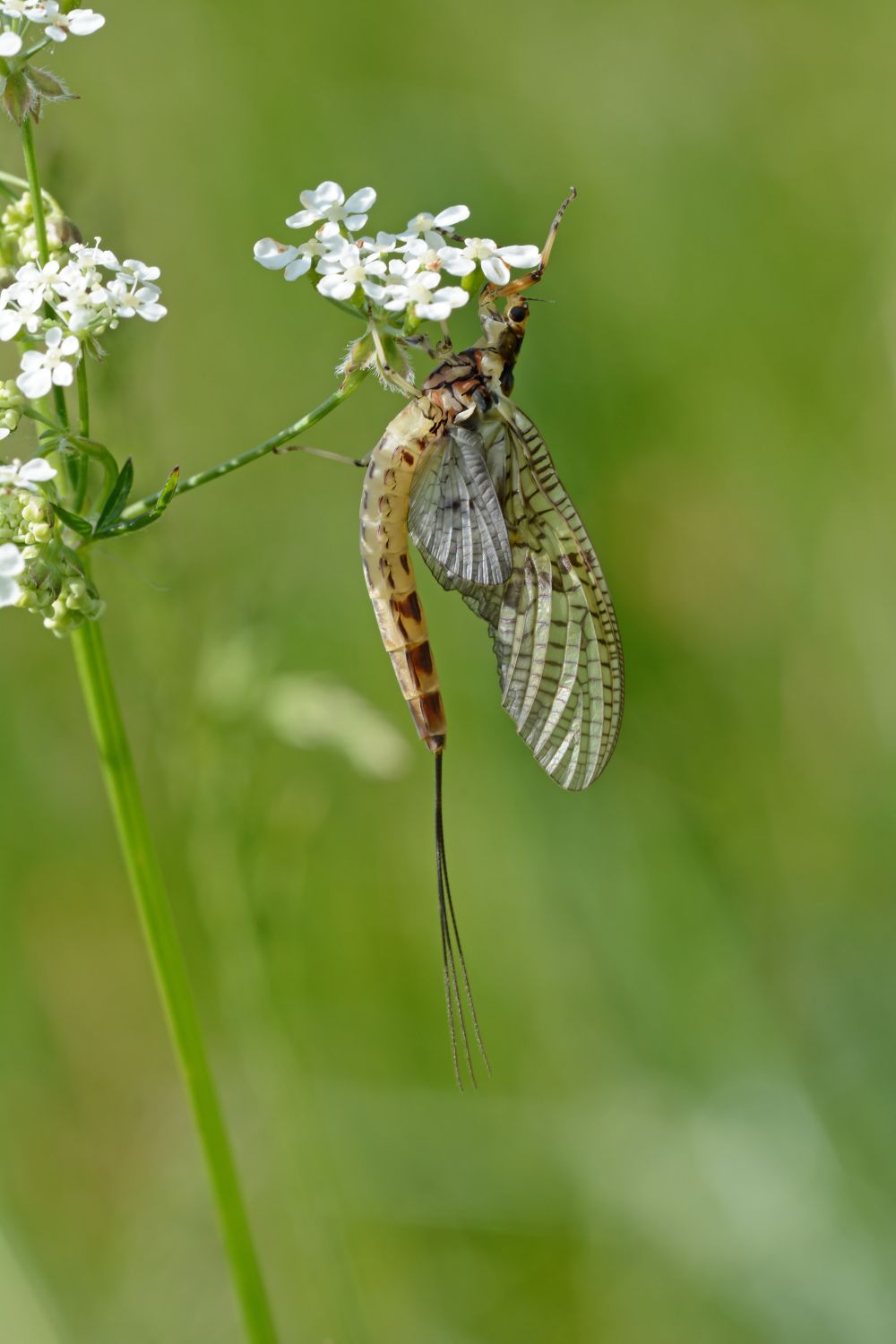 When mayflies turn into adults, they lose the ability to eat and their main role is only to reproduce. Generally, mayflies can only eat during the nymphal stage. They are herbivores and some of the food they eat include the following:

Mayflies also feed on detritus and other insects. These nymphs collect their food by moving over stones and weeds. According to a study from Croatia, mayflies are also filter-feeders. Some species of mayflies are omnivores as they also eat tiny aquatic animals.

Threat and Predation of Mayfly

Since these aquatic insects are herbivores, their main threat is pest control. Fish also eat them, which is why fishermen take them as artificial lures.

Their predators usually depend on the size of the mayflies. Those who prey on mayfly eggs include snails and caddisfly larvae.

Furthermore, those who prey on naiads and subimago include dragonflies, birds, flies, and water beetles. Frogs also prefer mayfly nymphs.

Lastly, those who prey on mayfly adults include trout, catfish, frogs, newts, and birds.

The Role of Mayflies in the Ecosystem 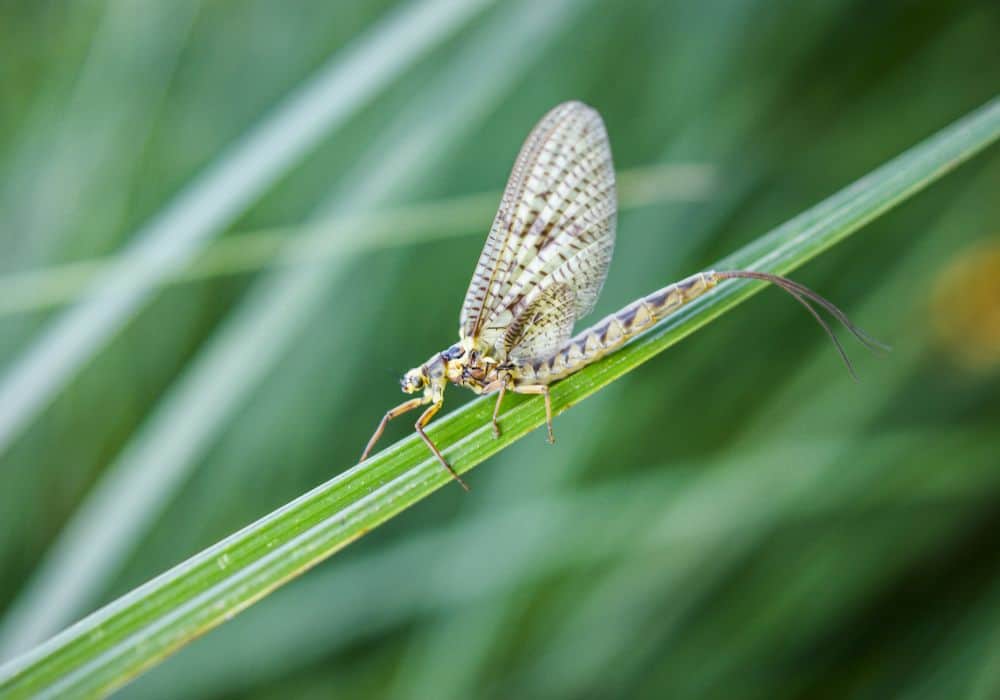 Like other marine animals and insects, mayflies, especially nymphs, play a big role in the ecosystem. Some of their roles include the following:

According to a study from California, mayflies can transport nutrients within and between aquatic ecosystems. This is important in increasing the survival rate of aquatic animals in case of climate change.

Based on their habitat, mayflies are very picky. They choose an environment with great water quality. For ecologists, this behavior can give them indicators of the quality of water.

Another thing about mayflies is that they can help in preventing the spread of parasites.

For example, one of the hosts of nematodes and trematodes includes mayflies. When they attack mayfly nymphs, they allow themselves to enter a watery environment, thus killing themselves on their own.

Another example includes the Paragordius varius whose main host is a grasshopper. Take note that one of the predatory insects of nymphs includes grasshoppers.

When grasshoppers infected with the parasite prey on nymphs, the former will usually jump into the water, thereby destroying its own life, including the parasite.

Mayflies and Humans: Do They Sting and Bite?

You might wonder if these aquatic insects can harm you. Fortunately, they cannot bite or sting you because they do not have mouths or stringers. They only live to eat and reproduce, and they do this cycle until they die.

However, according to a study from Saudi Arabia, some species can cause allergic reactions. Some of the conditions these aquatic insects can cause include the following:

If you wonder how these allergic reactions occur, they happen when these insects shed skin. When this shredded skin is blown out, you can inhale them and your body will take them as allergens.

Indeed, mayflies are interesting aquatic insects that live not just for themselves but in the aquatic ecosystem as well. These insects come with many common names and the “mayfly” was termed after the month when most of them appear. It is not hard to identify mayflies because their physical appearance is very unique. They have compound eyes, slender bodies, and thread-like tails. There are also many species of mayflies. All of these species are present all over the world, especially in North America.

Furthermore, you can also differentiate a mayfly nymph from an adult mayfly because the former comes with no wings, yet.  When nymphs turn into adults, their lifespan would only be 2 days. For females, when they lay eggs, even if it is not yet 2 days, they can already die. In terms of diet, mayflies are predominantly herbivores but some species are also omnivores.

If you wonder if these aquatic insects harm you, worry not because they live in this world to eat and reproduce.