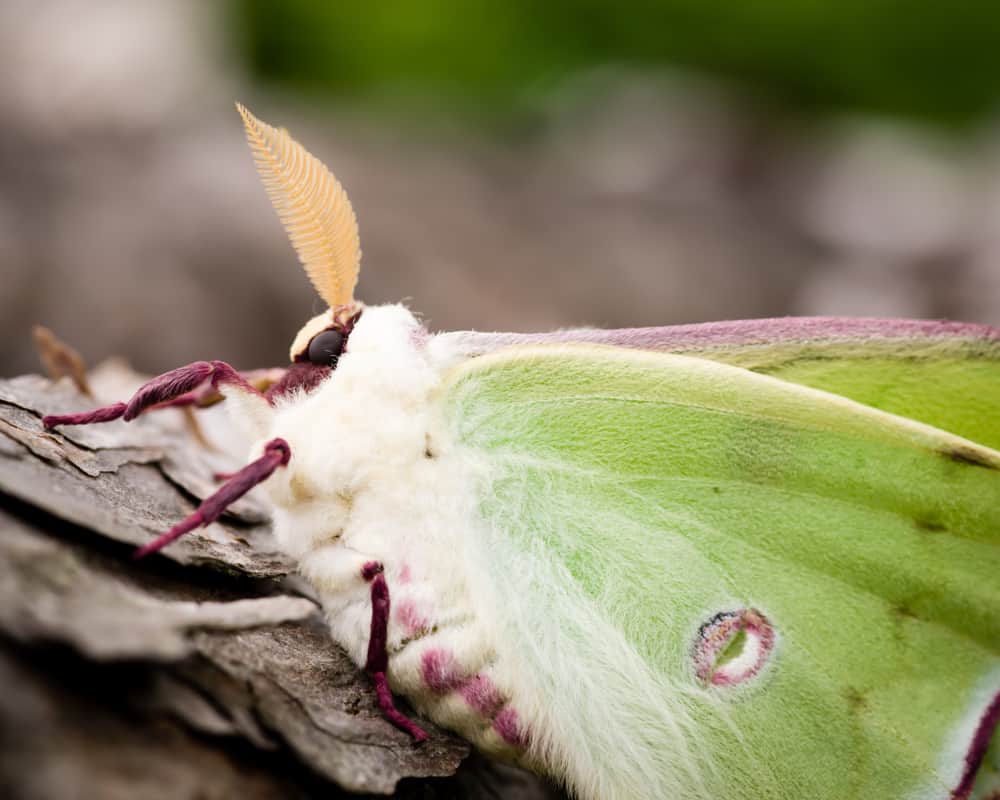 Did you know that Luna moths are related to the giant silkworm? However, they are completely harmless. What about the fact that their life span is very short?

Also, what do Luna moths eat? I find that it is important to note that Luna moths eat a wide variety of leaves and plants, but most moth/butterfly gardens do not attract them. Why?

In this article, I highlight the facts about the Luna moths diet for many people who try to woo them.

Before looking in-depth at the Luna Moth caterpillar’s diet, it’s important to understand who they are and what their life cycle entails. The overall color of adult Luna moths is light or lime green, with something like a darkened forewing cutting edge and a lengthy, tapering tail on the hindwings; every one of the four wings has an eyespot. The antennae of males, in general, are fluffy.

Larvae are bright green caterpillars with slender yellow stripes at the hindquarters for every section, a yellowish lateral (side) stripe running underneath the spiracles (tiny gaps that allow air through the respiratory tract), and three lateral columns of reddish tubercles under each side; the head is light brown.

Until hatching, the eggs are incubated for 8–13 days. The caterpillars eat and grow larger before pupating in a small, silken cocoon woven among the fallen leaves on the soil and emerging as winged adults.

In some states, there are three broods, with adults traveling from early April to late August. Females “call” males around midnight by releasing pheromones that the male’s incredibly sensitive, featherlike antennae might detect.

The winged adult, like the other subfamilies, does not live long because they are unable to feed and must rely on the food they ate as caterpillars. They just live long enough to reproduce and mate.

Habitat And Conservation Of The Luna Moth

Luna moths are most predominantly reported in and around deciduous forest areas, where their larval food plants, walnut, hickory, persimmon, and Sweetgum, can be located.

Populations have decreased in several regions due to habitat loss and expanded nighttime use of bright lights, which can also interrupt breeding processes.

What Do Luna Moths Eat? 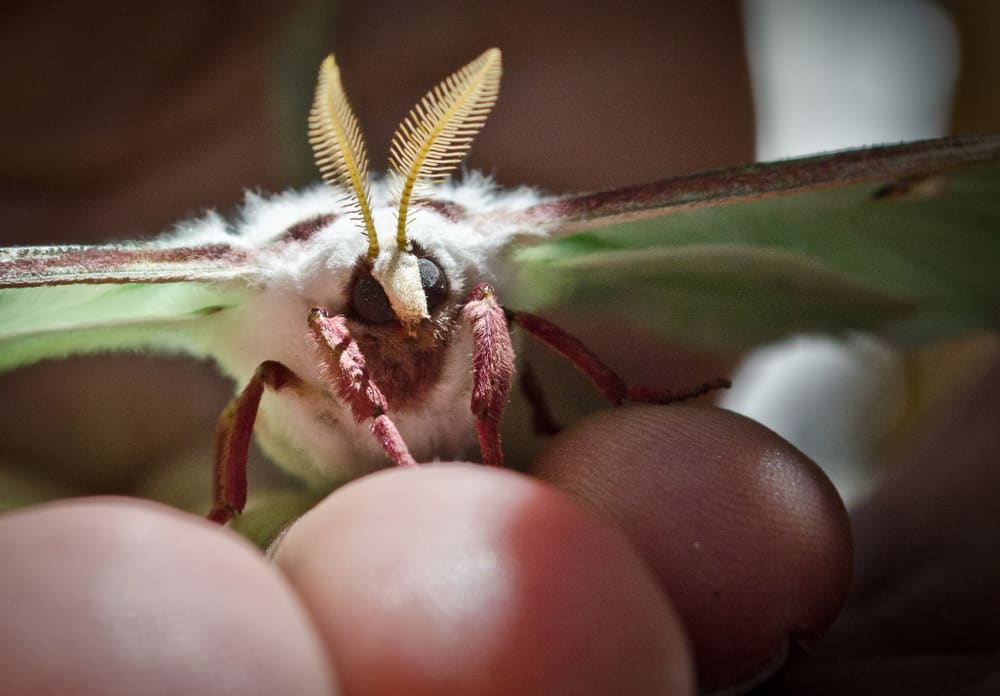 A study from the National Library of Medicine, which involved eleven hosts plants, revealed that the Luna larvae survival rate is best on Hickory, Walnut, Birch, and Butternut

Adults, like some other relatives of the large silkworm population, have diminished mouthparts and do not consume any food. Adults only exist for only about a week as a result.

A University of Florida study revealed that White birch, Betula papyrifera Marsh, is the most common host for northern populations. Other southerly groups feed on a variety of species, including walnuts (Juglandaceae) and hickories (Rhus); Sweetgum (Liquidambar styraciflua L.); and persimmon (Diospyros Virginiana).

Hickory is the chosen source, but most hickories shrivel up quickly when trimmed, so experts suggest nurturing them in sleeves or frames on living plants.

This problem can be solved by delivering fresh food on a daily basis. Sweetgum is an excellent choice for captive breeding.

Luna moth caterpillars, particularly the Actias luna Linnaeus also have a fascinating ability in that their feeding patterns differ based on where a species is found. It is more common for them to use a host plant for food and cocoons.

Instead of the species as a whole, targeted at the population or actual level. The plants’ owner allelochemicals contribute to this host-plant usage “. Actias luna larvae were given two distinct forms of vegetation in one trial.

The larva survived and developed at a regular, healthy rate when given walnut leaves. When the larvae were provided with leaves from the camphor tree, however, they all died. The Luna caterpillars are very picky about what they consume.

Despite the fact that the effects of the two forms of vegetation were entirely different, the water and nitrogen content (both essential nutrients) were strikingly alike.

The Luna moth’s diet can be ruined by even minor chemical differences, which is why location-specific use of a host tree is very important. A caterpillar needs to be well-fed in order to make it through the cocoon period.

Do Enzymes Aid in the Diet of the Luna Moth? 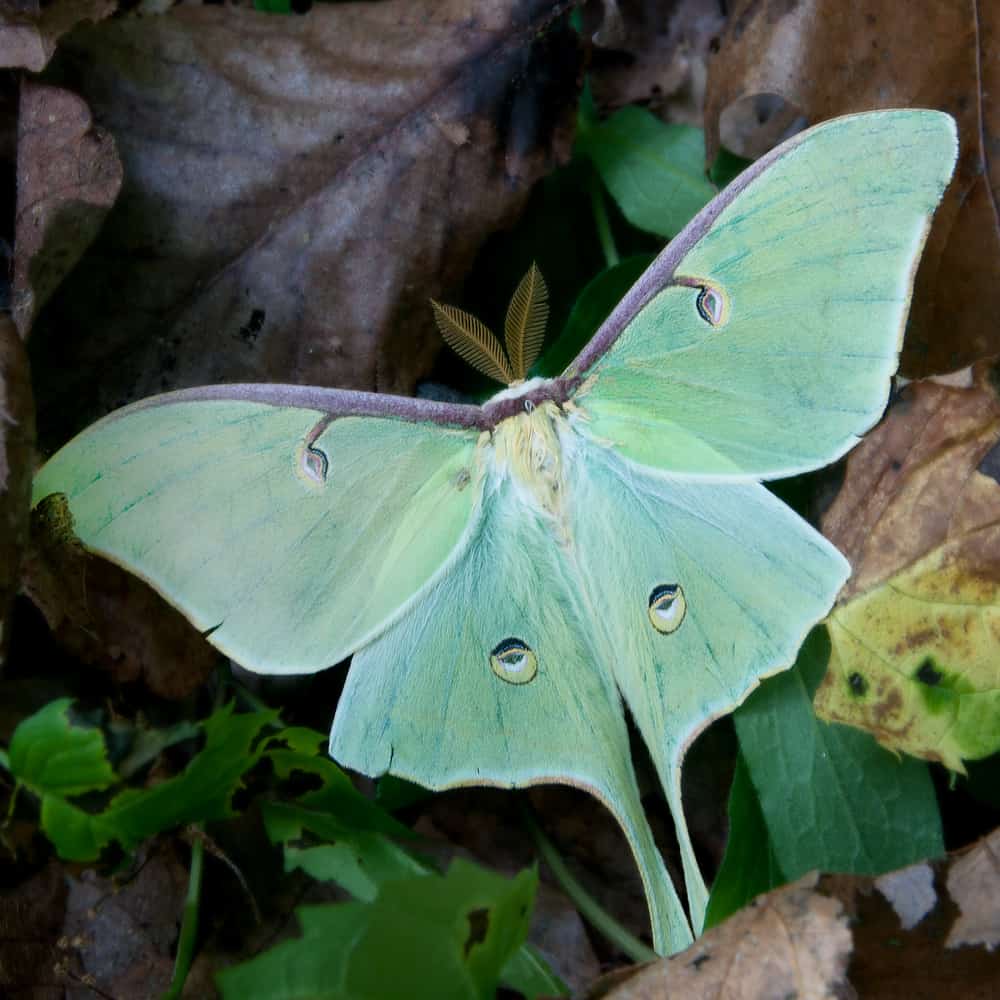 The capability of Luna caterpillars to consume the hickory foliage (and even the leaves of several other favored host plants, including certain butternut and walnut) is dependent on their enzyme production, as per a 1989 report by Richard Lindroth.

Juglone is a protective chemical produced by hickory, butternut, and walnut trees. Juglone may prevent other plants from growing near these trees, as well as bugs from eating them.

Caterpillars cultivated on juglone-producing plant species in Lindroth’s study produced highly elevated levels of an enzyme that let them withstand juglone in their feeds, according to the caterpillar lab.

Luna caterpillars grew on birch, which also doesn’t contain juglone, really had low concentrations of this enzyme that Lindroth hypothesized that their bodies never started producing it at all. 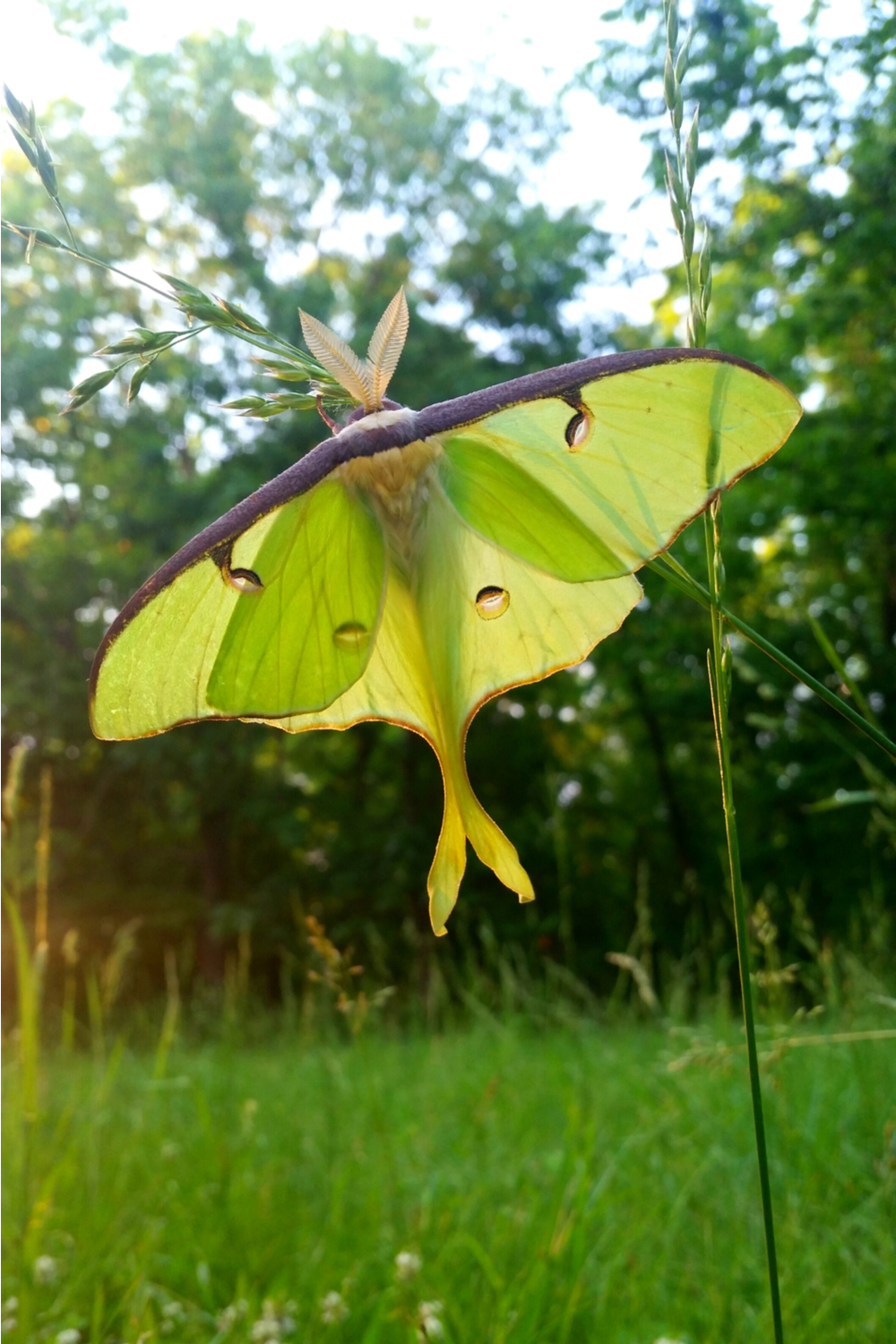 Generally speaking, Luna caterpillars have a wide range of diets, but they have very particular local preferences.

Lindroth tried to raise Luna on eleven separate documented host plants in his research, but only four of them were successful. Why didn’t any caterpillar make it?

Lindroth theorized that local Luna populations are uniquely suited to particular host plant species, likely due to the enzymes their bodies produce to aid in food digestion.

His Luna may not have had the adaptations needed to eat plants that other Luna thrive on because they all came from a single regional population.

The plant is not defoliated since numerous breeding birds who are departing, such as vireos, consume the Luna moth caterpillars.

Luna Moth is one of the 456 Lepidoptera species caterpillars that eat Black Cherry, but their survival rate is very low.  In late summer Black Cherry produces a copious crop of berries that are enjoyed by 33 species of birds.

Growing Conditions: Adaptable to a variety of situations, sun or part sun, dry to moist soil.  Seedlings can be transplanted.

I found that the Luna caterpillars are drawn to the sweetgum tree. Sweet Gum Trees are known for their beautiful leaves shaped like stars and vibrant autumn colors.

The Sweet Gum Tree is found in the southeast US as well as Central America. In the fall, the gleaming bright green foliage looks orange, purple, yellow, and red.

The Sweet Gum Tree’s fruit is a rough, spikey sphere that measures about 12 inches in diameter and is known as a “Gum Ball”—not fun to walk on with bare feet! Sweet Gum is a host plant for Luna and Promethea Moths.

On the leaves and roots, look for lime green larvae and cocoons. Sweet Gum plants can be generated in large containers for several years before outgrowing their pot if they are maintained excellently. 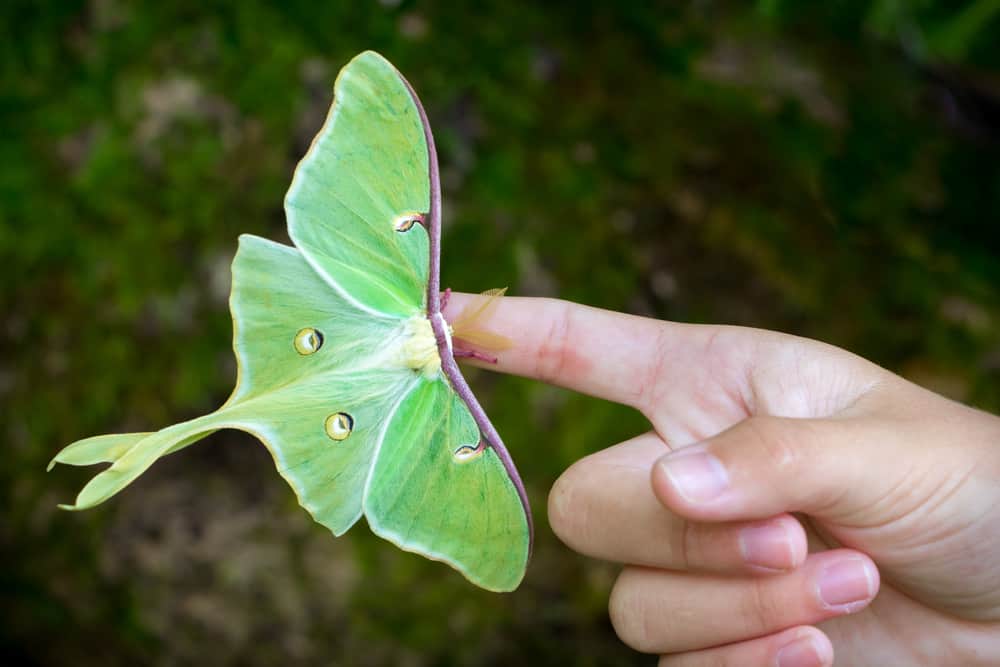 Anybody that is fortunate enough to see a Luna moth appreciates its elegance.

Collectors of butterflies and moths deem these stunningly beautiful moths to be among their prized possessions.

If you’re trying to attract luna moths to your home, then nectar-producing trees typically used to draw butterflies, hummingbirds, and even some moth species will not work.

They do not like nectar and stay far away from nectar-producing plants.

If You Plan To Pet Lunar Moth Caterpillars 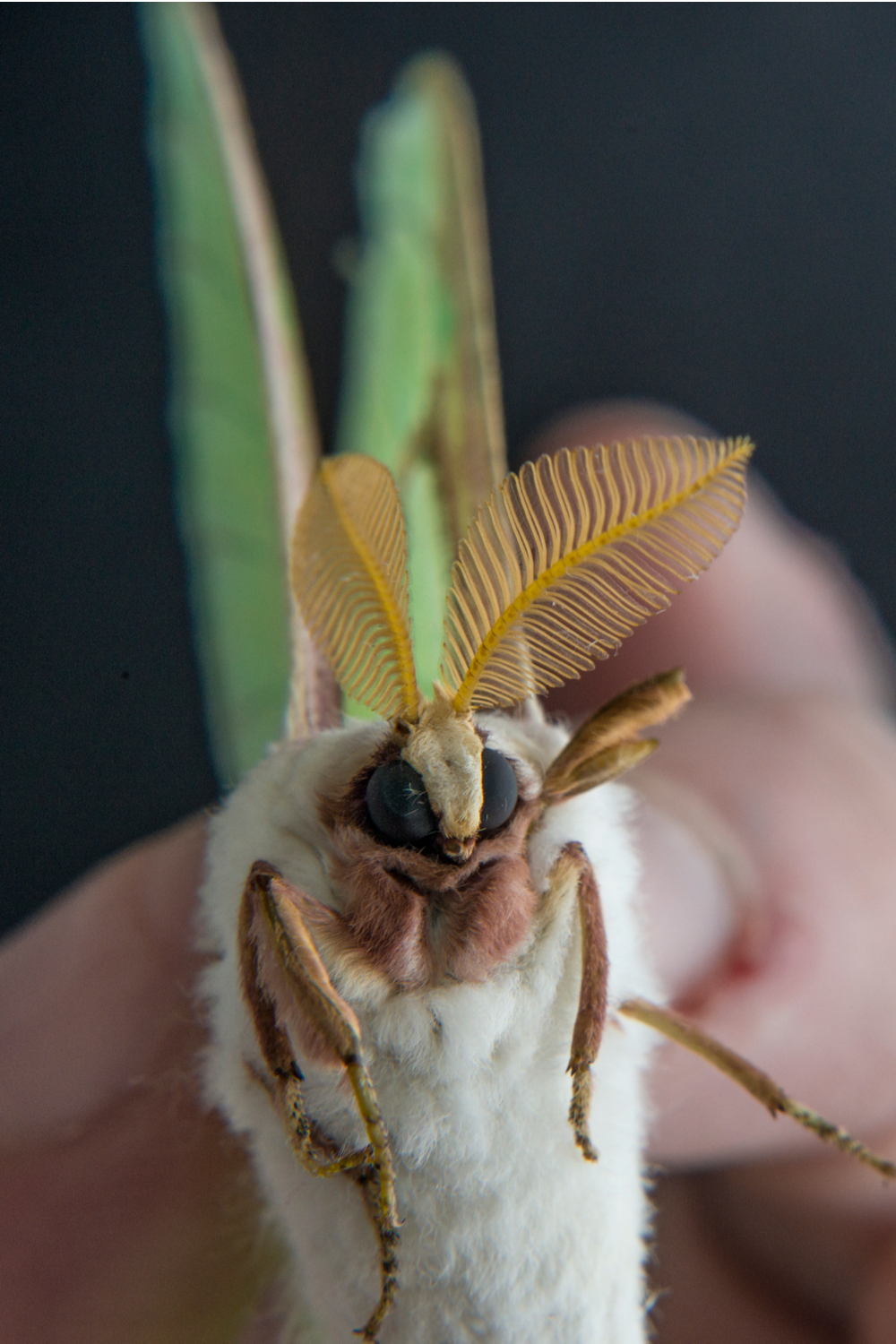 Establish a host plant, like the white oak or walnut, until the eggs have been hatched. It’s a good idea to mix up the leaves from various host plants so that the caterpillars consume what they prefer, then feed them just that assortment.

Immediately after the lunar moth eggs have hatched, it’s imperative that you place leaves from the host plants inside their cage/shelter. Luna caterpillars will start feeding as soon as they hatch.

Noting that they get their nourishment and liquid from whatever leaves you feed them, it’s important to change the leaves inside their shelter on a regular basis.

The Luna caterpillars will not shed their skin until about one month after they’ve reached a full-mature stage.

Lunar Moth And The Ecosystem

Caterpillars of the Luna moth are herbivores that graze on tree vegetation. Predators find food at all times.

The tails on Luna moths’ hindwings seem to interfere with the sonar used by hunting bats to find the moths.

To ward off predators, Luna moth caterpillars will produce clicking sounds and gag.

However, the unintended consequence of fly and wasp parasites deliberately brought to North America to feast on non – native species, invasive gypsy moths are dwindling communities of our native saturniid moths (the category that comprises luna moths).

Overall, the Luna Moth is an amazing creature that has no mouth and only feeds at its larvae stage. It survives better in or near forest areas but can be raised in your home if you provide the right leaves. If you’d like any clarifications or have any questions or comments, I’d be happy to answer them for you in the comment section below. How to Attract Luna Moth: