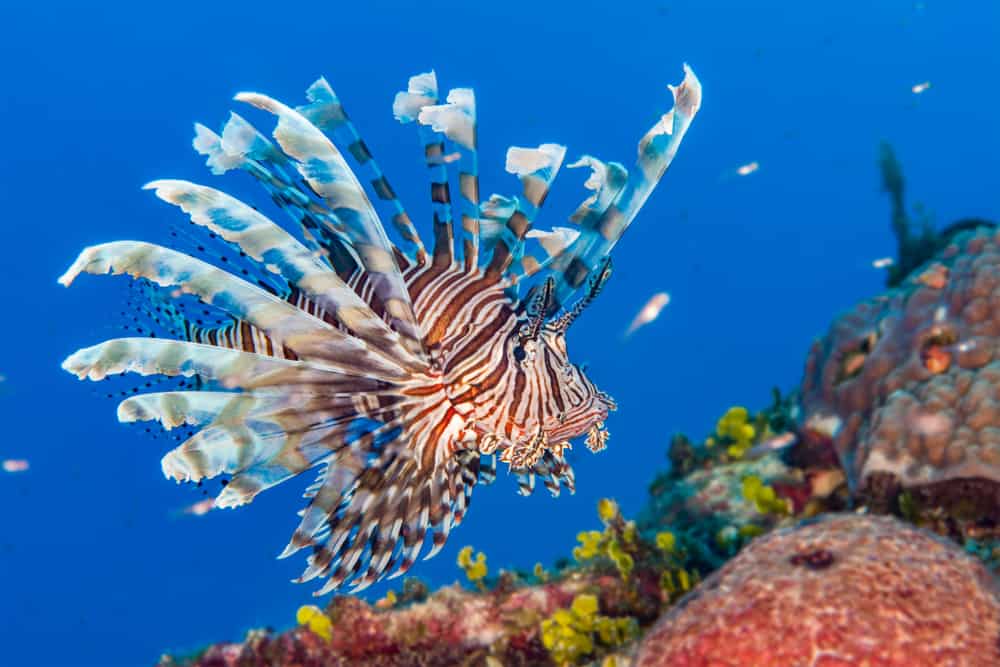 If you thought sharks and piranhas were the only intimidating species of marine life, you better think again. But what species of fish can be more threatening? The answer to this question is the lionfish. Lionfish are not only harmful to other marine life, but also to the environments and ecosystems that they inhabit.

Lionfish were first spotted in the Western Atlantic Ocean 1985. Since then, they have spread to different waters, including the Florida coast, the Caribbean, and the Gulf of Mexico. Lionfish are an invasive species, which means that they cause ecological or economic harm in new environments.

Lionfish are a dangerous predatory fish that poses a major threat to other marine life because they prey on native species using their venomous spines to sting other fish. Lionfish also reproduce quickly and early in life. In fact, they are capable of laying between 10,000 to 40,000 eggs every four days.

Given the rate at which these creatures can multiply and the significant harm they can do to other sea life, a lot is being done to get them out of the water and away from other fish. Continue reading to get answers to all your questions, including “What do lionfish eat?” and more. 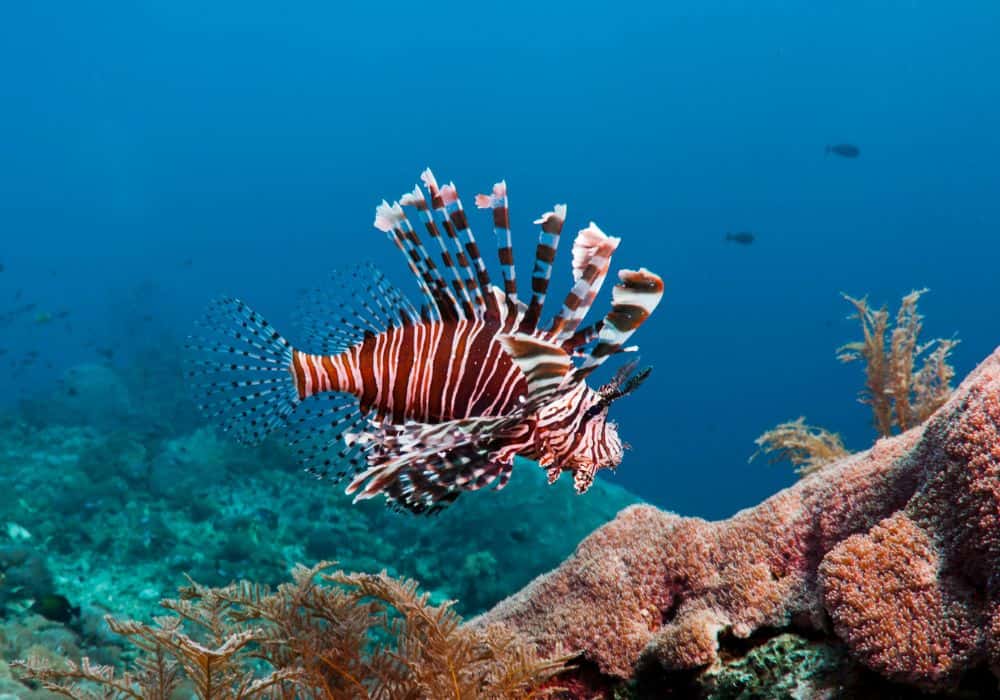 Lionfish are a species of reef fish that is native to the South Pacific and Indian Oceans. Over time, however, lionfish have become an invasive species and can now be found in habitats in the United States’ Southeast and Caribbean coasts.

There are about 18 different species of lionfish in existence, all of which can draw their roots back to the Indo-Pacific region.

Unlike other fish in their environments, lionfish are distinguishable by their fan-like pelvic fins, long dorsal spines, and fleshy tentacle texture. They are also colorful and sport a zebra-like pattern along their fins.

Part of the scorpion fish family, lionfish are known for their venomous fins and zebra-like stripes. When a lionfish feels threatened, this predator spreads its fins and uses its dorsal spine to attack.

Lionfish are capable of puncturing and wounding other fish with their fins that are full of toxins and venom. Although the wounds they inflict on other fish are painful and can cause a few undesirable symptoms, a lionfish sting or wound is rarely ever fatal.

What Do Lionfish Eat in the Wild?

Lionfish are not picky eaters, and they will eat any fish that comes its way as long as it fits in their mouth. In fact, lionfish eat over 50 different marine species, from yellowtail snappers and parrotfish to coral shrimp, and more.

By eating so many different species of fish, lionfish play a big part in negatively affecting the ecological balance of oceans and reefs.

In addition, they compete with other predatory fish in the water, such as snappers and groupers, for nourishment.

What Do Lionfish Eat in Captivity? 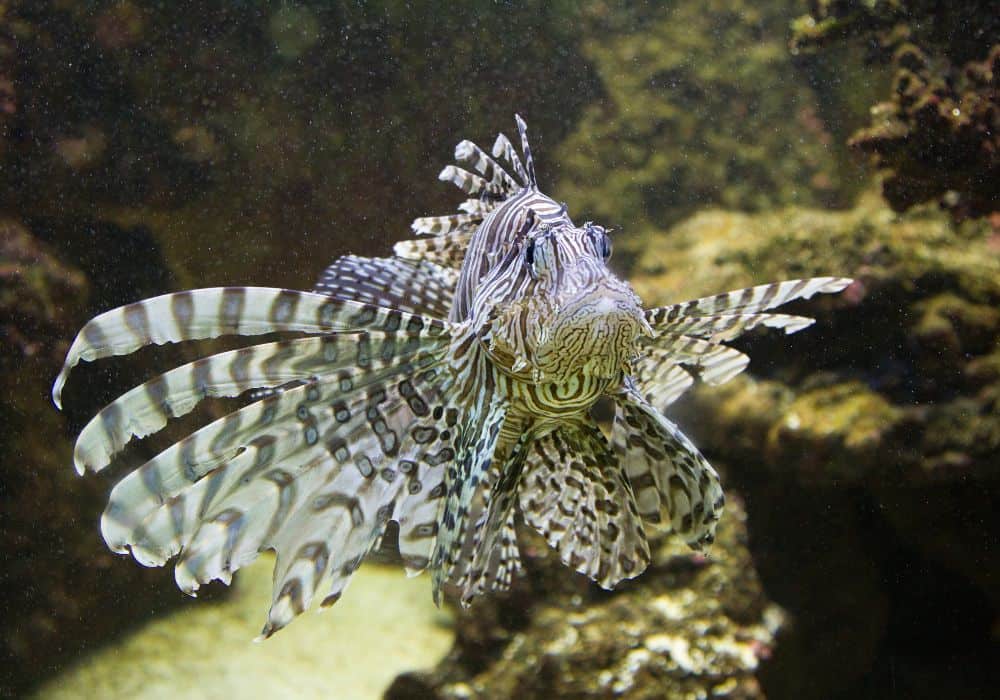 In captivity, there are less food options for lionfish to take advantage of. As a result, lionfish that are kept in captivity usually maintain a diet of frozen food, such as squid, as well as freeze-dried krill.

Because lionfish will eat nearly any type of live fish, it is not recommended to keep them in captivity with other fish in the same tank. The other fish will not stand a chance against the predatory lionfish.

To be kept in captivity, it is recommended to have an aquarium that is a minimum of 29 gallons in total. For larger lionfish species with a greater body weight, such as red lionfish, a 120-gallon aquarium is recommended.

There are no known predators that pose a direct threat to lionfish. However, it is highly likely that if eaten in the wild, lionfish would be eaten by larger aquatic species, such as eels, sharks, sea basses, and snappers.

Why Are Invasive Lionfish a Problem?

Invasive species like lionfish pose a major threat to other animals that share their environment. Typically, invasive species have access to new areas when they are carried by the current or strong ship engines. These species can do so much harm and are capable of making certain animals or plants become extinct.

Invasive lionfish are a big problem because these predatory fish remove prey that could have gone to other native fish populations. As a result, the supply of food available for native species decreases significantly, causing them to go hungry, and in some cases, die.

In addition, lionfish harm their environment and have an overall negative impact on marine life. Because their diet is so broad, many times they end up eating fish that serve important roles in the ecosystem.

For example, lionfish may feed on herbivorous fish that work to maintain algae in the ocean. Once these fish are eaten by lionfish, there is no species left to do that job and the algae is left to grow wild.

Because lionfish many times eat the fish that are tasked with keeping coral reefs healthy, they can be largely to blame for the dying coral reefs around the world.

How to Remove Lionfish from an Ecosystem

Given the major threat they pose to existing sea life, there is a need to remove these creatures from the ecosystems that are suffering from a lionfish invasion. This has proven to be a very difficult task, however, because of the lionfish’s agility.

Unlike other fish, lionfish do not swim in schools, or groups. Instead, they are more solitary and tend to hide in coral. This makes them extremely difficult to spot.

Once a scuba diver spots a lionfish, they are in for another challenge: capturing the fish. Lionfish cannot be caught with rods or nets. Instead, fishermen, divers, and marine scientists catch them using spears that grasp onto them as quickly as possible.

Now that you know what lionfish eat, are you still curious to learn more about lionfish? Check out our frequently asked questions (FAQs) for everything you need to know about these marine creatures.

Do all lionfish have the same color?

The color of a lionfish depends on its species. As a result, not all lionfish have the same color. Most lionfish regardless of species, however, are similar in color, with red, brown, or maroon serving as their primary color, and zebra-like stripes covering their body and fins.

A slight change can be seen in the lionfish color when these creatures are ready to mate. At this time, males turn into a darker color and their stripes become less visible. Females, on the other hand, turn paler while a silver white color appears on their mouth and throat. This color change in male and female lionfish shows when they are ready to mate.

Are lionfish good to eat?

Yes! In fact, a higher demand for eating lionfish is a great step toward getting more of these predators out of ocean and reef ecosystems.

Although we may never be able to fully remove lionfish from the world’s reefs, you can play your part by requesting lionfish at your local supermarket. This will help prove the demand for removing these predators from the water and putting them onto plates and lionfish cookbooks, where they can do no harm.

After a lionfish is caught, it should be stripped of its venomous spines, cleaned, and filleted, like other fish that are eaten. Once this is done, the lionfish is ready to cook to your liking and enjoy.

Many people describe the taste of lionfish as moist, tender, and buttery. As a meal, this type of fish is not as firm as other fish, but it is rich in protein. Lionfish can be served in dishes like ceviche, a seafood dish with raw fish that is marinated in lemon or lime juice. 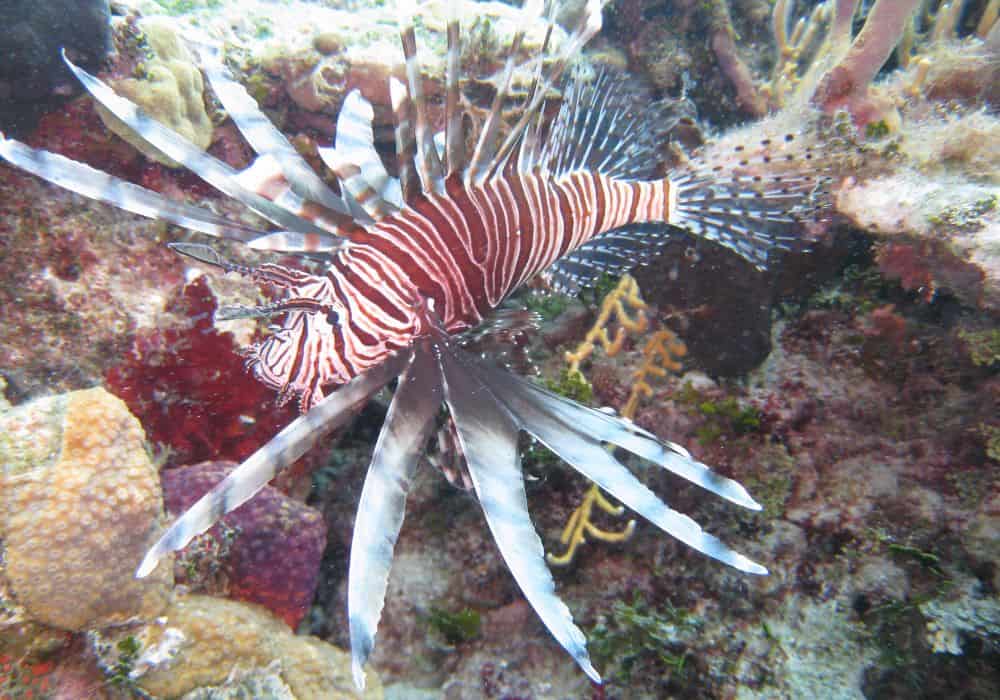 Lionfish are mainly a saltwater fish species. So, yes, lionfish do need saltwater to survive. Although lionfish can easily adapt to most environments, they cannot survive in freshwater.

If being kept captive, it is important to keep your lionfish in a saltwater or reef aquarium with enough space and hiding areas for the fish to retreat to.

Everything You Need to Know About Lionfish

Over the years, the number of lionfish in existence has greatly increased and caused irreparable harm to sea life. As an invasive species, they have invaded waters where they do not belong, putting other marine species at risk for extinction.

There is so much to know about lionfish and the impacts they have on the ecosystem of the waters they inhabit. As a quick recap, here are a few fast and interesting facts about lionfish:

If you would like to know anything else about lionfish, feel free to leave your questions in the comments section!