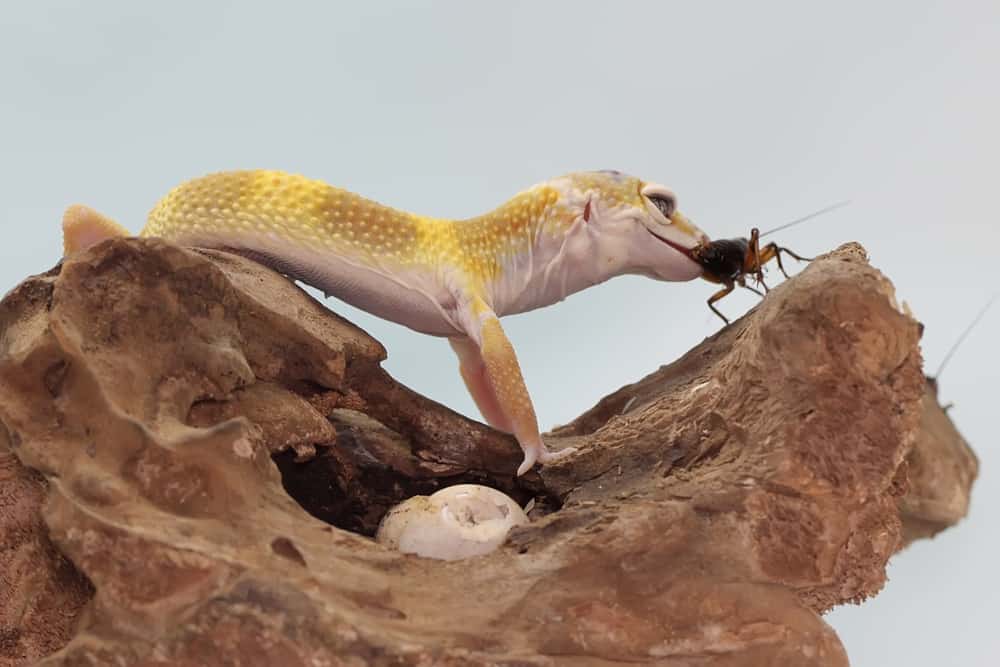 Leopard geckos are fascinating and beautiful creatures – and they’re becoming increasingly popular as pets. If you’d like to find out more about them, you’ve come to the right place!

What do leopard geckos eat? Where do they live in the wild? And how can you keep them happy and healthy as pets? We’re going to answer all these questions and more. So read on to find out everything you need to know about these wonderful reptiles!

Leopard geckos are small lizards that get their name from the distinctive spots on their bodies. When they first hatch, they’re between 2.8 and 3.9 inches long. The size of a mature adult leopard gecko varies according to its sex. Females are between 7 and 8 inches, while males are between 8 and 11 inches.

Their favored environment is rocky desert and scrubby grassland. You can find them in the wild in Afghanistan, western Nepal, north-west India, Pakistan and some parts of Iran.

Their habits, though, are the subject of some debate. Some people say they’re nocturnal. Other naturalists believe them to be crepuscular – that is, more active at dawn and dusk. And still others say they’ve seen them basking in full sunlight in the middle of the day!

There’s also disagreement about how sociable they are. Some pet breeders claim that they’re solitary animals. That, however, seems to be a marketing gimmick designed to make potential owners more comfortable with buying a single gecko.

In the wild, according to naturalist Muhammad Sharif Khan, they live in loose colonies with animals of different ages. And this YouTube video from JTB Reptiles makes a convincing case for keeping pet leopard geckos together.

Their sociable traits are supported by leopard geckos wide repertoire of communication. This includes waving and vibrating their tails, mouthing, squeaking and whistling. All of which, of course, also makes them very cute as pets!

They have some other interesting abilities too. Their mouths are filled with no fewer than 100 teeth, all of which are replaced every three to four months.

And their teeth aren’t the only thing they can replace. A leopard gecko who loses its tail can regrow it – although the new one will tend to look a bit stumpy.

One thing they can’t do, though, is climb smooth vertical walls. That’s because, unlike some other reptiles, they don’t have adhesive pads on their toes.

What Do Leopard Geckos Eat in the Wild? 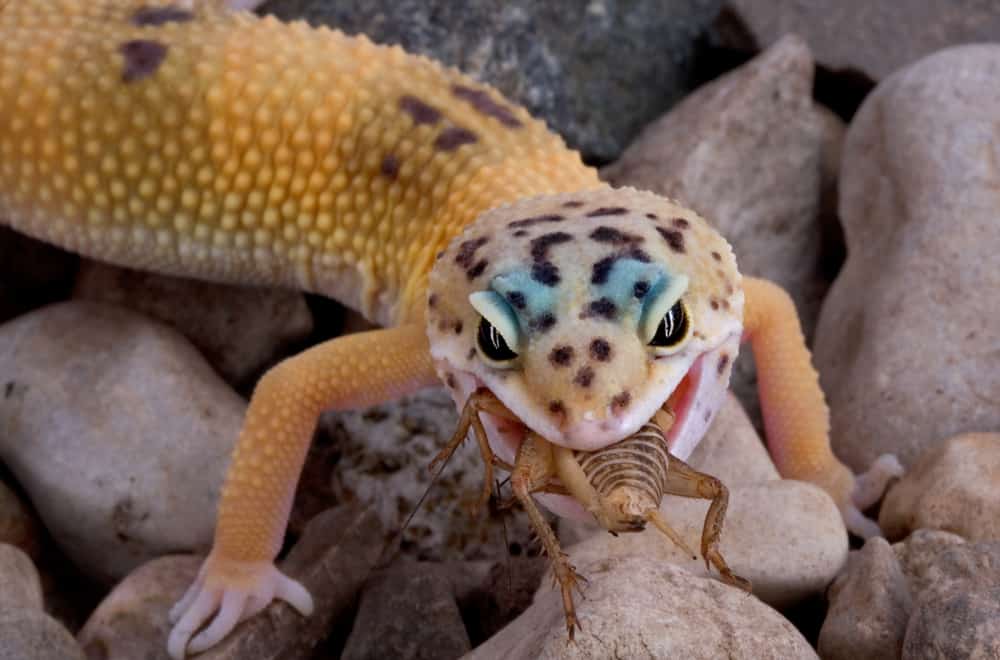 The main food of leopard geckos in the wild are insects. There are several different types they like to munch on – we’ll find out more about that shortly.

Their diets change as they age. Young leopard geckos tend to stick to insects. But as the animals get older, they’ll take opportunities to snack on other forms of prey. Whatever they find, they’ll eat as often as possible.

Leopard geckos are alerted to food by its movement – they will ignore dead carcasses. They stalk their prey slowly before finally pouncing. The captured critter is held in their jaws until it stops moving. The gecko will then swallow it whole.

Here’s the diet of a leopard gecko in more detail:

What Do Pet Leopard Geckos Eat? 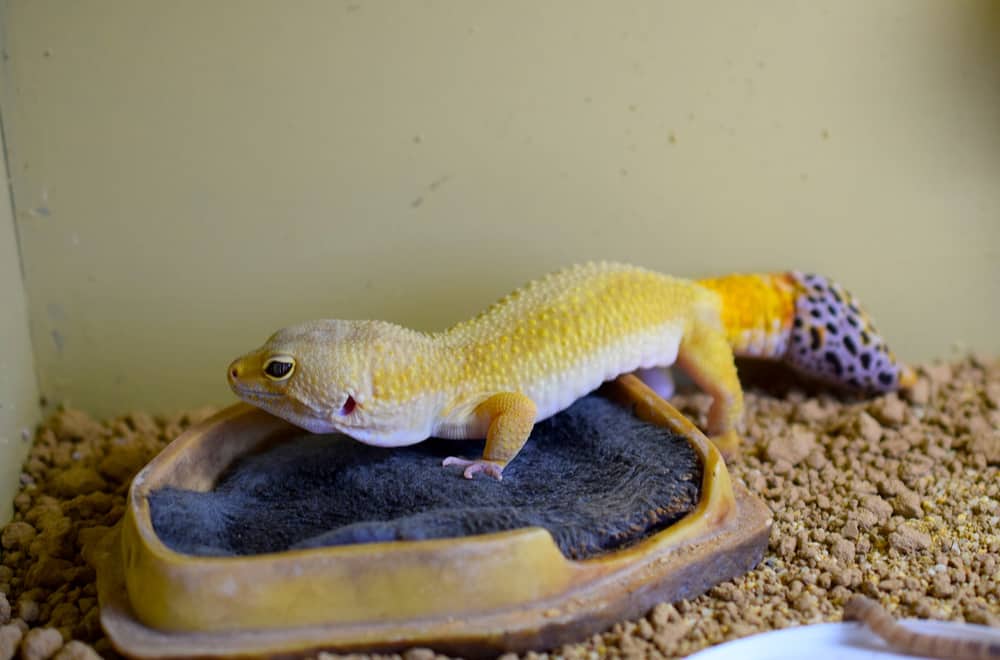 If you’re keeping a leopard gecko as a pet, you’ll need to find foods that are readily available. Here are some of the options you can find at most reptile shops that will keep your leopard gecko in great shape.

Some leopard gecko owners recommend cutting off the morioworm’s head before feeding it to their pet. This isn’t for everyone, however. And as we know, leopard geckos want to eat their food live. With plenty of other options available, it may be best to give morioworms a miss. 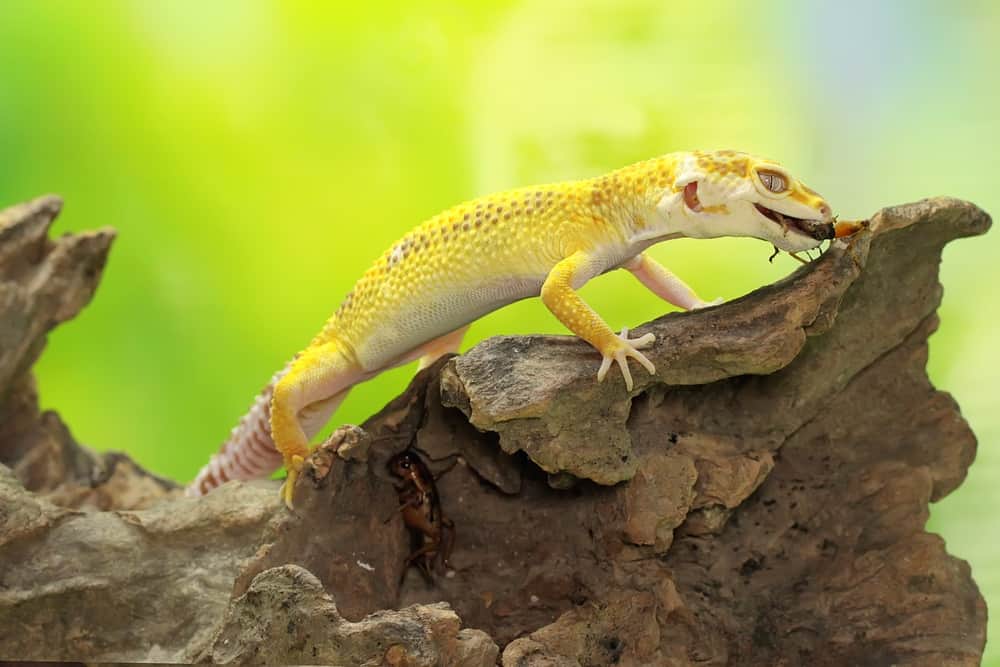 In the wild, sources of food for leopard geckos can be uncertain. It’s thought that they eat just nine insects a week on average. For that reason, they’re very good at storing food.

The downside of that is that it’s easy for leopard geckos kept as pets to become overweight. Keeping higher calorie foods as an occasional treat will help your gecko stay healthy. That includes lots of the worm options, like mealworms and waxworms.

But remember – leopard geckos are insectivores. Don’t attempt to feed them vegetables or salads. And keep them away from all other forms of human food.

And don’t be tempted to feed them insects collected from outside. You won’t have any way of knowing what those insects have been eating – that could include insecticide-laden vegetation. And it’s possible they may be carrying parasites too.

Stick to insects that have been bred in captivity. And if you’re breeding them yourself, you want at least three generations of captive insects before you begin feeding them to your leopard gecko. That will ensure that any diseases, parasites or pesticides haven’t been passed on.

All of course, all insects should be alive when they’re fed to your leopard gecko.

Your leopard gecko will also need dietary supplements. Place powdered supplements in a small plastic food bag before adding the insects. Then give it a shake so they’re coated in the powder. That way your gecko will automatically get the extra nutrients when it munches on the insects.

We hope you’ve enjoyed our answer to the question of what do leopard geckos eat!

If you’re keeping one of these fascinating creatures as a pet, a varied diet is important. Remember to feed your leopard gecko only live insects that have been bred in captivity. And keep mealworms and waxworms as a special treat to help your gecko watch their waistline!