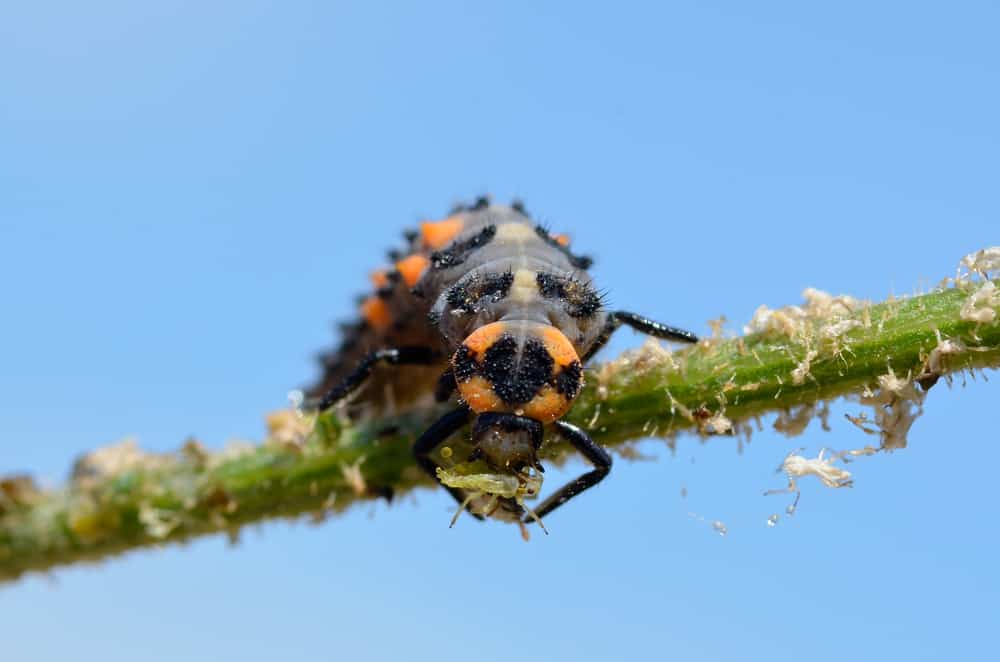 Worldwide, there are about 4000 species of ladybugs. The ladybug larvae are essential biological control agents for orchards and gardens. They are commercially sold to farmers worldwide.

Ladybugs belong to the Coccinellidae family and are known predators with voracious appetites for aphids and other soft-bodied plant animals. They can also be referred to as ladybird beetles, lady beetles, or ‘the gardener’s best friends.

Ladybugs are very beneficial insects in any garden. As soon as they are hatched into the world, they start to feast. A single ladybug can lay up to 300 eggs that hatch within 3 to 10 days, depending on the favourability of conditions.

Ladybug offsprings progress through a four-stage life cycle known as complete metamorphosis. Ladybug larvae are harmless to humans even though they look dangerous. So, what do ladybug larvae eat?

Did you know that a newly hatched ladybug larva eats between 350 and 400 aphids by the time it attains full growth? However, once a certain size is attained, the larva stops feeding and attaches to a plant leaf or stem, where they enter the pupa stage.

After the female has laid eggs, they hatch within 3 to 10 days, depending on the existing temperatures. The larvae will take about a month to grow before entering the pupa stage, which takes roughly 15 days.

During this stage, the larvae feed on insects. Once the feeds get scarce, adult ladybugs move away to look for greener pastures leaving the larvae to survive with the remaining supply. 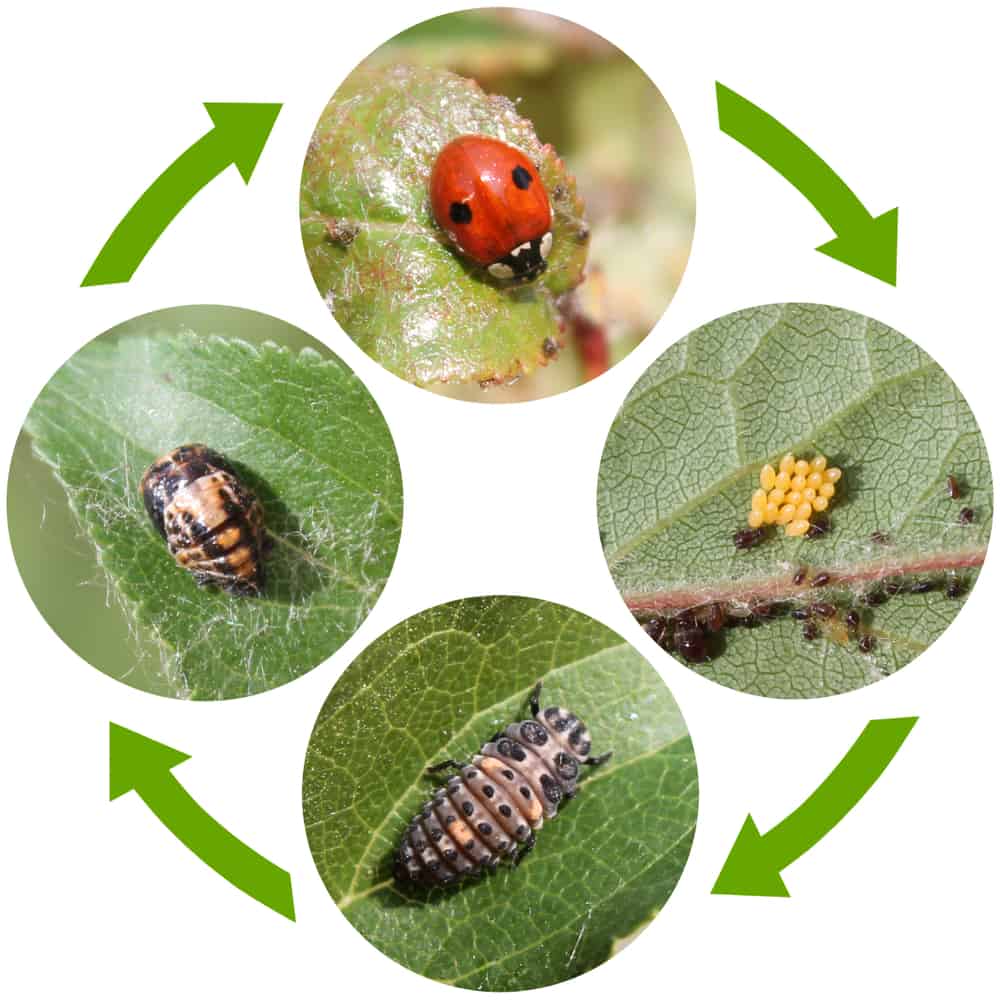 After the pupa stage, they develop to the adult stage and live for two to three months. However, some species may have a lifespan of up to 2 to 3 years.

Unlike adult ladybugs which can be black, red, orange, yellow, or pink and marked with evident spots as a defensive mechanism to intimidate prey animals.

ladybug larvae are usually black with bright pigmented spots and look like tiny alligators with bumpy exoskeletons and elongated bodies. They have unique hemispherical, convex, to oval-shaped bodies.

The larvae are protected by an odorous, noxious fluid that comes out of their joints when they are disturbed.

All the developmental stages often occur during the summer months.

Most ladybugs are predators and eat most insects that are considered pests by humans.

Ladybug larvae are not considered dirt eaters, but they feed on dozens of aphids and other soft-bodied garden pests such as mites, scale, thrips, flies, adelgids, and eggs of other insects. Surprisingly, they can even eat other ladybug eggs too.

Other subfamilies, such as the Epilachninae, are considered vegetarian ladybugs. They can feed on mushrooms and fungus. Still, some prefer eating leaves and can be pests to certain plants. 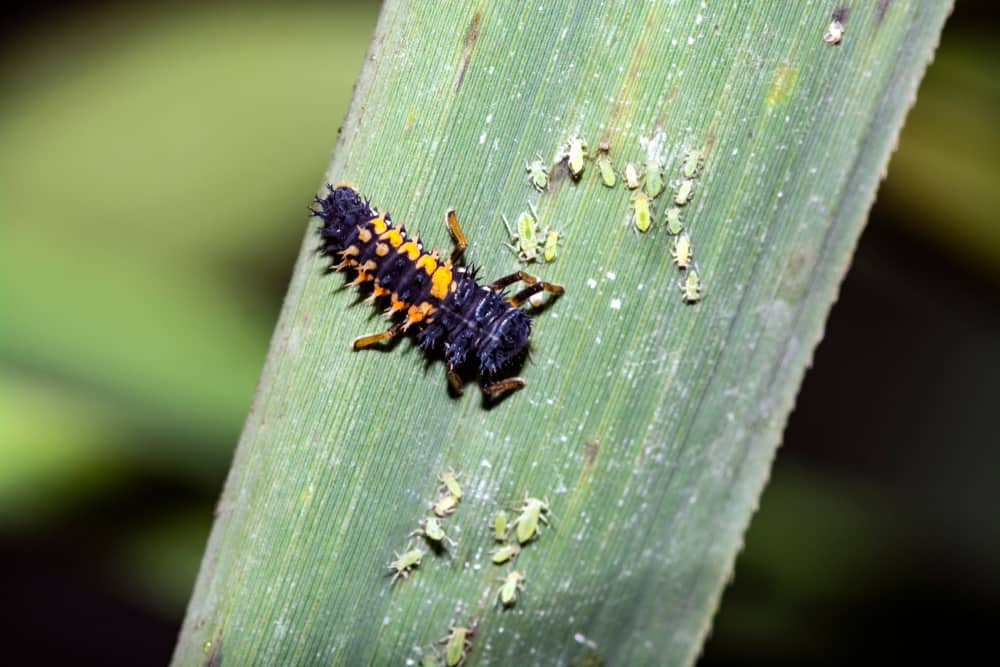 Today, there are commercially produced ladybug larvae packaged in suitable conditions and ready for release into the desired environment. 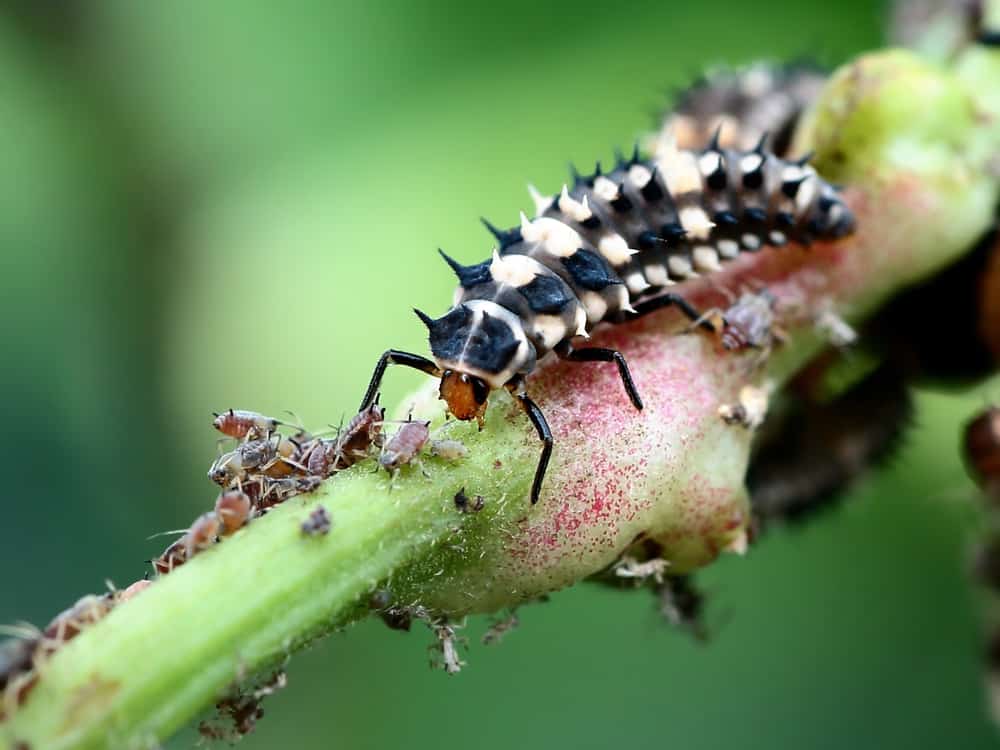 Ladybug larvae can be quite delicate if not handled with care. Lady beetles must be held in the refrigerator until they are ready to be released.

Customers are drawn to live lady beetles on display in stores, but beetles left out at room temperature quickly deteriorate.

Lady beetles are also frequently dehydrated and need water, especially if they have been kept at standard room temperature for more than a few hours.

Before storing lady beetles in the refrigerator, storekeepers or gardeners should spray them with water in a squirt bottle, being careful not to let water puddle in containers.

According to a study by the University of California, aphid regulation requires a large number of lady beetles.

In this case, applications of about 1,500 lady beetles each, spaced a week apart, are needed for one large, heavily infested rose bush in the landscape.

The majority of store-bought packets only contain enough lady beetles to treat one aphid-infested shrub or a few small plants. It’s therefore important to obtain enough ladybug larvae and take good care of them to achieve the best results.

Ladybug larvae must be fed and hydrated to maintain optimum growth. Aphids are an important part of ladybugs’ diet in the wild. If you want to keep your ladybug for more than a week or two, you can capture or purchase some aphids to keep them happy and satisfied.

Also, remember to give them drinking water. Place a damp piece of paper or cotton around them to act as a source of water and check up on it every couple of days to ensure it stays wet.

You can feed ladybug larvae with raisins broken into halves. The whole idea is to soak the raisins in water to make it easier for the ladybug larvae to eat.

You may also graze your ladybug by tearing half of a lettuce leaf into tiny bits. Another alternative is to put a dime-sized glob of honey in a bottle cap with 2-3 drops of water—plan on only feeding your ladybug larvae once or twice a day to avoid overfeeding.

Remember, ladybugs feed on pests. Therefore, for you to have healthy ladybugs, don’t spray pesticides on your garden regularly as this diminishes their feeds and kills most of their populations.

Given that their diet mostly entails proteins found in the insects they feed on, ladybug larvae also need a source of carbohydrates to help in reproduction purposes. Carbohydrates are sourced from sugars in plant nectar.

However, since ladybug larvae do not have mouthparts designed for nectar sucking, as in bees, the best sources of nectar are tiny flowers with exposed nectaries.

Make sure you give your ladybug larvae diversity by planting different species of plants. Interplant your garden with herbs that flower within shrubs, and integrate plenty of flowers all over your yard to allow the proliferation of enough numbers of ladybugs.

Ladybug larvae should be placed at the base of plants or underneath low branches for them to climb higher to look for aphids. Remember not to release them to plants that have been sprayed with pesticides as these can be toxic. 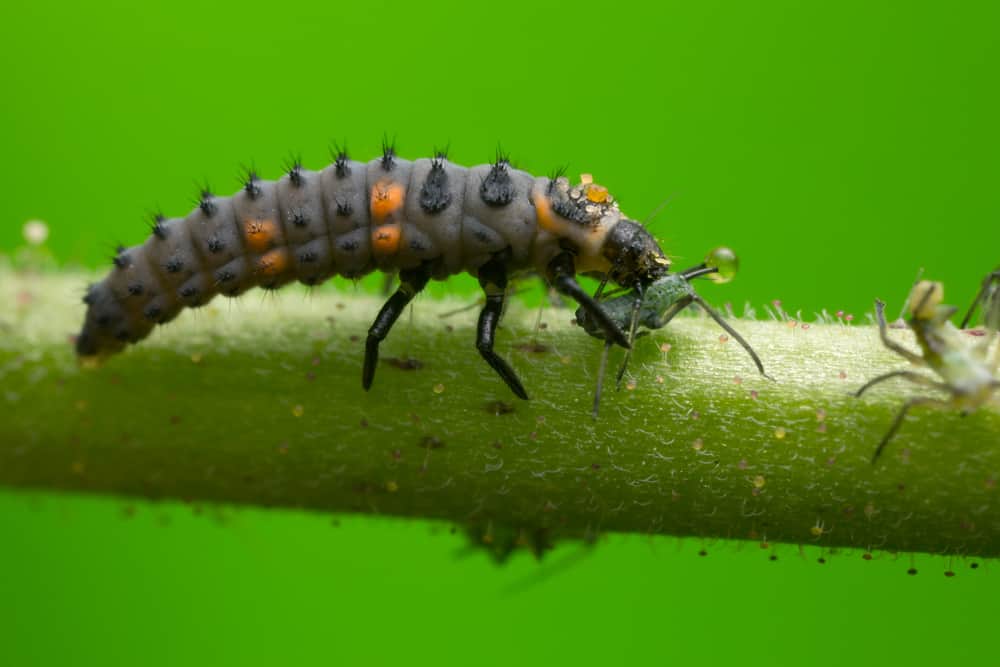 Yes. Ladybug larvae do eat moistened raisins and other non-acidic sweet fruits. For a special treat, you can add a trace of jelly.

2. What do ladybug larvae eat?

Most ladybugs enjoy eating aphids. These tiny insects are a nuisance to gardeners because they chew through plant leaves, causing foliage to be destroyed. Aphids can be purchased at any pet store and placed in your ladybug container as food.

3. What do ladybug larvae eat besides aphids?

While aphids seem to be the most favorite food for ladybug larvae, other delicacies include thrips, whiteflies, spider mites, and soft scales. Besides aphids and insects, ladybugs also feed on pollen, nectar, and honeydew.

This is often not the case, but some ladybug larvae prefer eating leaves and can even be pests for some plants.

Ladybug larvae are natural predators for plant pests like thrips and aphids.

In the absence of aphids, the lady beetle devours other soft-bodied insects such as scales, mites, leafhoppers, mealybugs, larvae(caterpillars), and butterfly eggs.

Ladybug larvae can eat other ladybug eggs as well as those of other insects’ eggs.

8. How much do ladybug larvae eat?

Newly hatched larvae eat about 50 aphids a day. In fact, a ladybug larva eats ten times the number that a mature ladybug eats.

9. Do ladybug larvae eat each other?

Ladybug larvae are eager cannibals; they can feed on their own.

No. Ladybugs do not attack or eat ants. Ants and ladybugs usually clash over aphids. Sometimes, ants can attack and kill ladybugs.

Ladybug larvae are major pest control resources for farmers and gardeners since their main diet is aphids, a common pest for plants beneficial to man.

They also feed on other pests such as mites, whiteflies, scales, adelgids, and eggs of other insects. Since ladybug larvae have voracious appetites, they can control their population by eating each other in the absence of their diet of preference.

If you want ladybugs in your garden, create a conducive environment with plants that attract ladybugs. You can increase the numbers by purchasing ladybug larvae sold by legitimate vendors.

Grow them and release them to your garden based on the size for optimum yields.

1 thought on “12 Things Ladybug Larvae like to Eat Most (Diet, Care & Feeding Tips)”