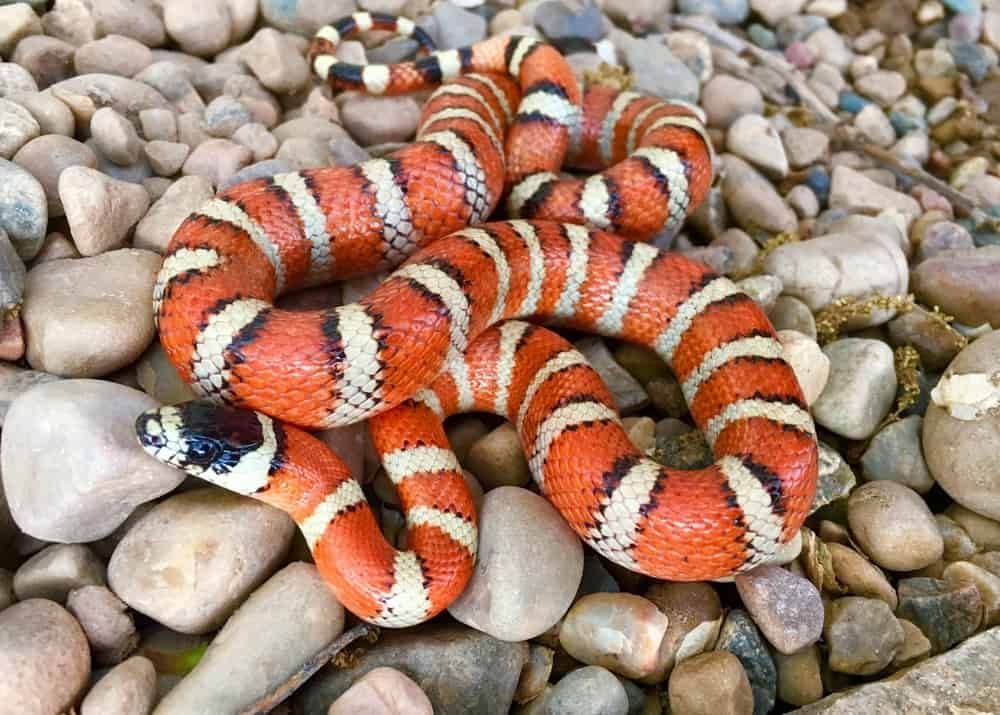 Are you intrigued to know what food item kingsnakes rely on for survival? If yes, you’re at the right place!

Be it educating yourself on how to feed your pet kingsnake or simply learning kingsnake’s wild feeding habits out of curiosity; we’ll cover all the related topics in this post.

Later on, we’ll also discuss how often to feed kingsnakes and go through a few reasons why your pet kingsnake might be losing its appetite. Let’s begin!

What Do Kingsnakes Eat? 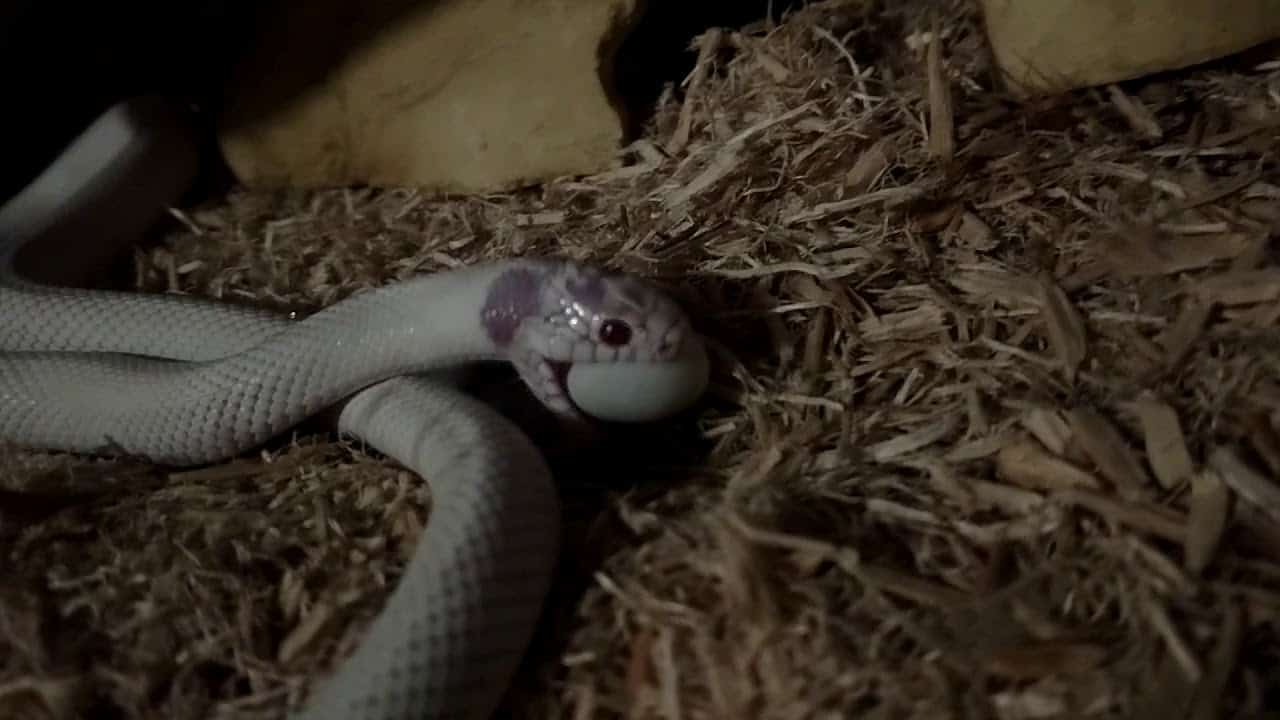 It is an incontestable fact that eggs are nutrient-packed food sources. Kingsnakes also relish poultry eggs and bird eggs whenever they find the opportunity. These snakes also enjoy themselves some reptile eggs.

In fact, these reptiles are also found sneaking around henhouses, wetlands, and rainforests during the mating seasons in search of eggs.

In captivity, kingsnakes happily gorge on quails and chicks. These snakes can also easily climb trees and, therefore, are sneaky enough to capture their bird preys from their own habitat. Kingsnakes don’t have any favorite delicacy when it comes to birds. All the smaller birds they can devour are on their menu.

The name ‘Kingsnakes’ speaks volumes about what the primary diet of this snake species is. Yes, kingsnakes are cannibalistic and can swallow their relatives whole.

Be it a non-poisonous or a venomous snake; kingsnakes can easily devour other snakes. In fact, these snakes have adapted to be resistant to the venoms of pit vipers and many native poisonous snakes.

To name a few, copperheads, rattleheads, and cottonmouths are some of the kingsnakes’ most favored delicacies.

However, king snakes can rarely be witnessed devouring their offspring. Snakes lay eggs and leave them to hatch on their own. So, they rarely have the chance to meet their own babies. However, they might probably gorge on their own babies if brought face to face in captivity.

King snakes are also fond of rodents. Not only do they gorge on rats and mice in their wild habitat, but experts also recommend feeding your pet kingsnakes frozen rodents.

However, in their natural habitat, mice and rats can struggle back, inflicting pain on the snake. So, it is a bit of a hassle for kingsnakes to dine on these rodents. 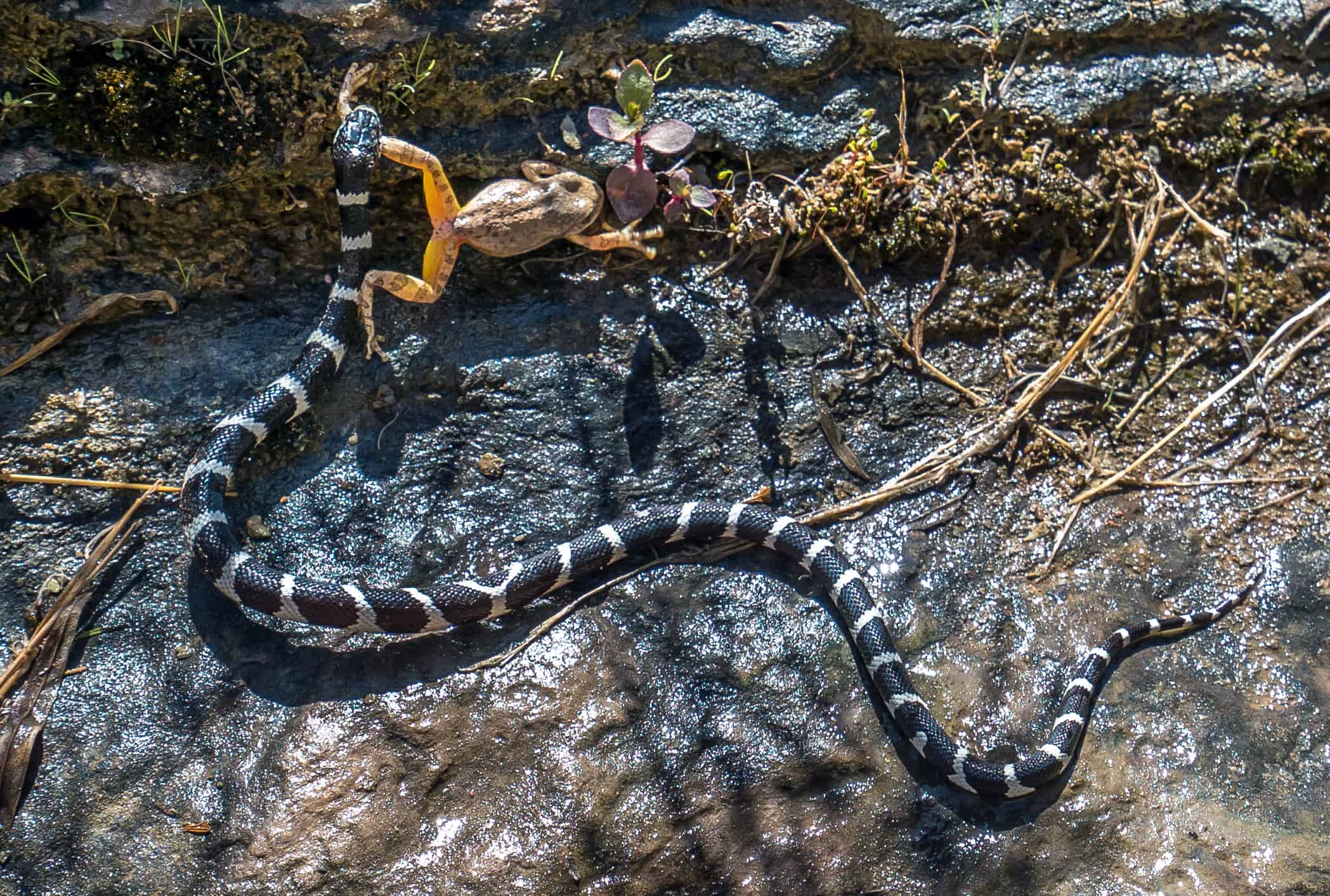 If a hungry kingsnake sees a frog or toad in its vicinity, they hunt them without giving a second thought. While snake-eating big frogs such as Goliath Frogs, American Bullfrogs, and Argentine Horned Frogs are uncommon species, almost all the snakes extant on this planet feed on frogs.

Frogs are a great source of protein, and the majority of small predatory species are known to eat frogs, including king snakes.

As we’ve discussed above, kingsnakes can quite effortlessly climb trees. Consequently, these snakes not only birds and eggs nest on trees but also are in search of lizards.

Although swallowing a lizard might not be as easy as eating other species, given how lizards fight back, kingsnakes surely love the struggle when gorging on lizards.

What Do Baby Kingsnakes Eat? 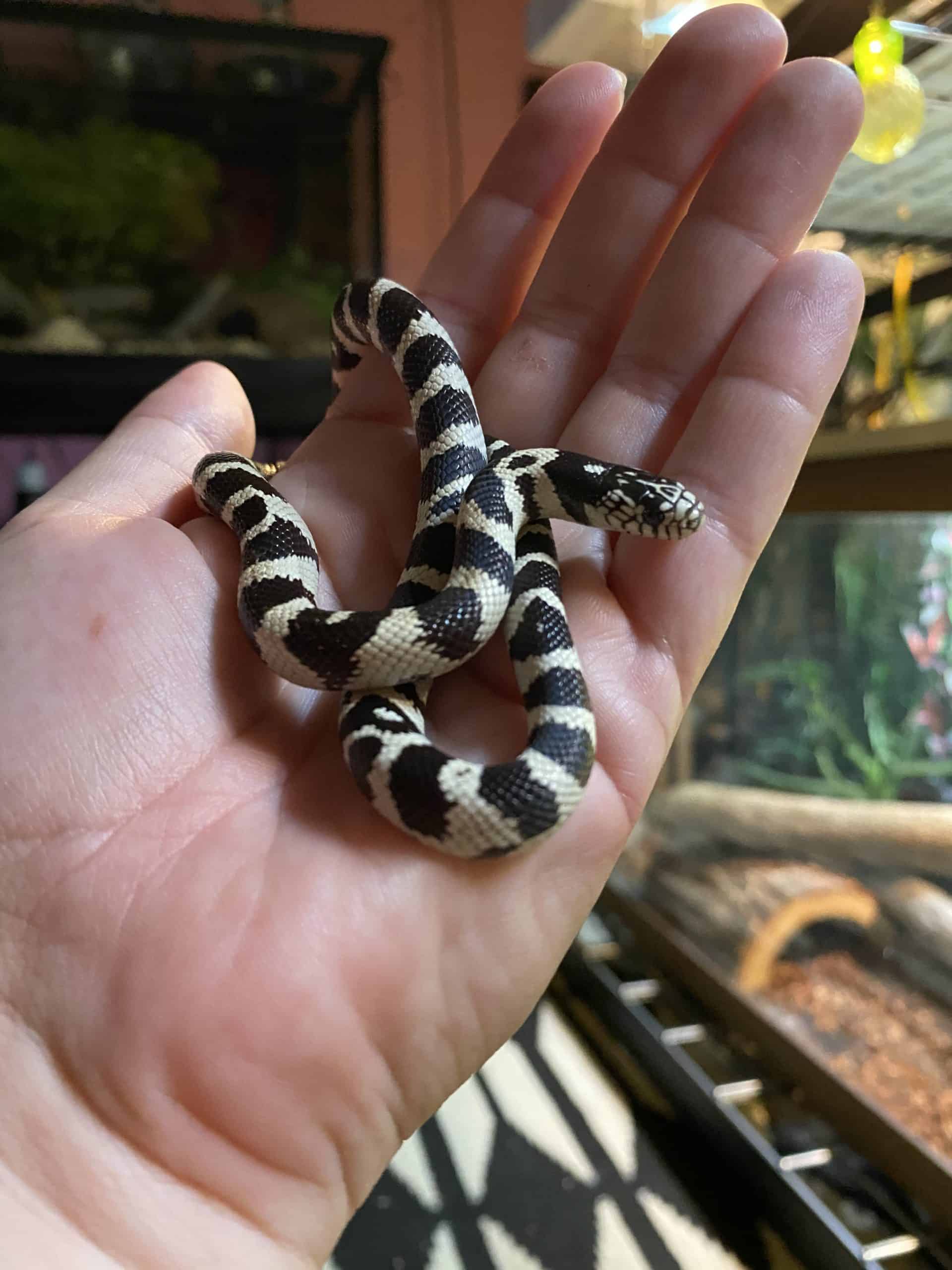 Baby kingsnakes in the wilderness enjoy eating eggs or any rodents, mammals, reptiles, or amphibians that are smaller in size and can overpower. In captivity, baby kingsnakes are often fed thawed pink mice.

Adult kingsnakes are generally 1 to 1.5 meters long, whereas their hatchlings range from 12.7 cm to 20.3 cm. These snakes have a shiny appearance, thanks to their smooth dorsal scales. Their body color and patterns vary with species and habitat.

The pattern is usually light-colored stripes on a dark background. The thickness of the stripes varies greatly, from think bands in some species to thin dot-dashes or spotted lines in other species.

Although rare, some Californian kingsnakes feature horizontal straps on the body instead. A distinct way from separately red and yellow coral snakes from kingsnakes is that the kingsnake’s pattern always features black bands separating the two colored bands.

How Do Kingsnakes Feed? 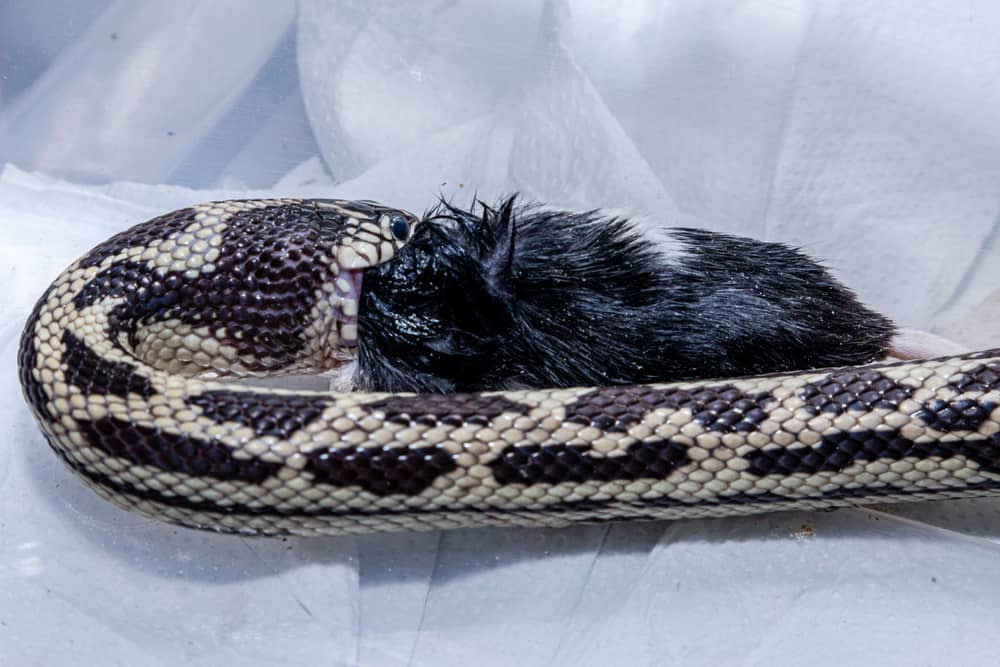 Kingsnakes grasp their prey with their mouth tight until the prey is unable to breathe and fight back. They swallow their prey whole. Kingsnakes do have teeth, but their teeth aren’t meant for chewing but for guiding the prey down towards the throat.

Kingsnakes also devour eggs whole. When it comes to their cannibalistic instinct, kingsnake strategically bites the mouth of its prey snake and swallows it whole. The prey snake, not being able to move or breathe, dies of suffocation instead.

What Do Kingsnakes Eat-In Captivity?

Kingsnakes are non-venomous and are innocuous to humans once tamed. Consequently, these kingsnakes are adored as pets by many snake enthusiasts.

In captivity as pets and in zoos, rodents make a large portion of kingsnake’s diet. As live rodents tend to struggle with kingsnakes aggressively, leading to injuries, fresh-killed mice are recommended for kingsnake’s diet.

You can also provide appropriately thawed frozen rodents for kingsnakes. Remember not to microwave these snake food as the resulting hot spots can harm the snake.

Moreover, always designate a separate freezer and area to freeze and thaw snake feed. Never prepare snake food in the area where human food is processed and cooked.

If you have to share the same space, always make sure you sanitize the area with a strong disinfectant.

How Long Do Kingsnakes go without Eating and Drinking? 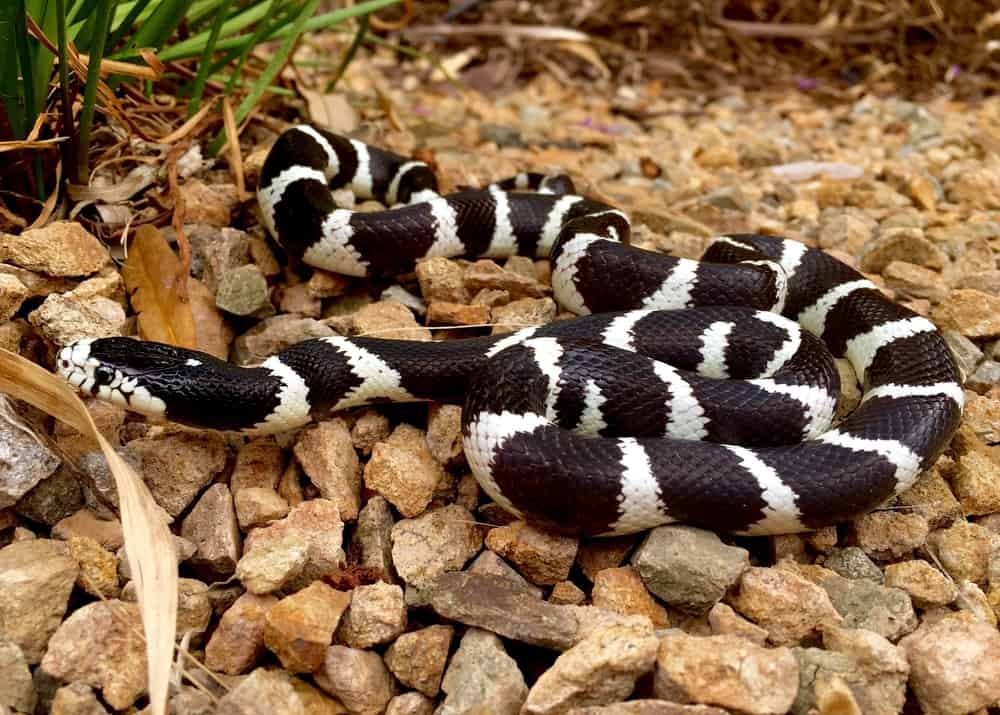 Kingsnakes can go a few weeks or a month or two without water. However, most snakes, including adult kingsnakes, can go up to 6 months without feeding.

Snakes often get their water intake from food. So, even if these reptiles can go months without food, starving your pet snake is definitely not a good idea.

How Often to Feed Kingsnakes?

First of all, you must realize that, unlike other typical pets, snakes need to be fed at long intervals. According to Petco, in the case of baby kingsnakes, feeding once to twice a week is enough. Likewise, feed your adult kingsnakes every week or every other week.

It would be best to start feeding your kingsnakes once a week and decrease the frequency to twice a week only in case the snake starts showing signs of obesity. Give them one or two mice for each feeding session.

Why Do Kingsnakes Lose Their Appetite? 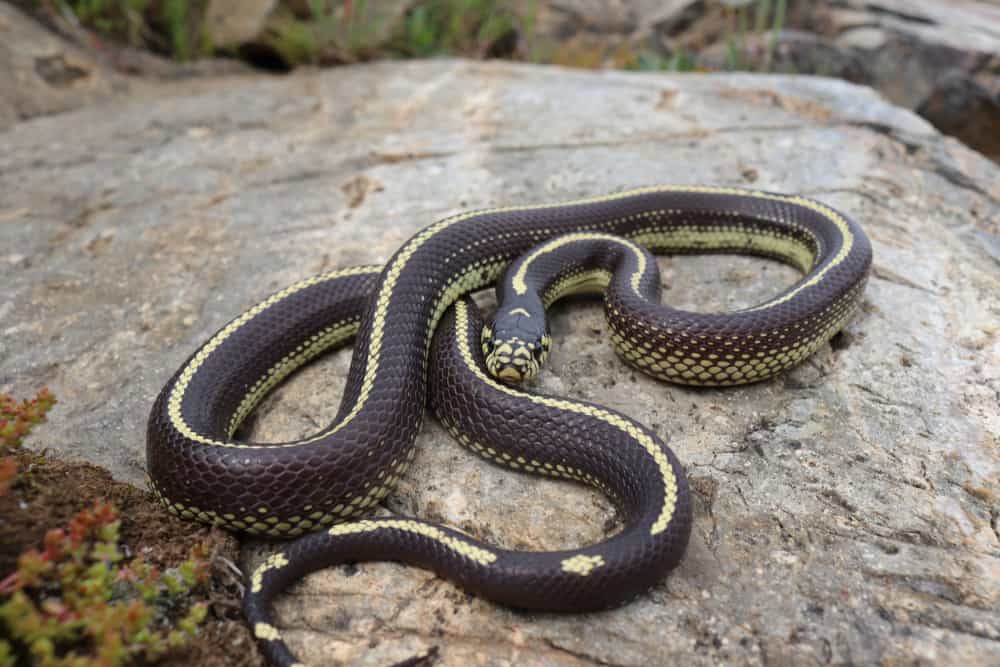 Kingsnakes can lose their appetite for multiple natural as well as environmental reasons. Once you rule out the below-mentioned natural and environmental factors that might have contributed to the appetite loss and the kingsnake still isn’t feeding, get in touch with a vet as soon as possible.

Firstly, the majority of snakes, including kingsnakes, lose their appetite during molting. Molting is the shedding of a snake’s skin which generally occurs every few months, generally three to six times a year.

Typically, the molting process can take a week or two. You can tell that the kingsnake is about to molt if its scales look pale and the eyes look milky and dull.

Kingsnakes also tend to avoid eating weeks or even months prior to hibernation during the winter. In fact, it is recommended not to offer them food during such period. However, if the snake is weak and ill, don’t let them hibernate.

Inappropriate temperature and humidity might also be the reasons why your kingsnake isn’t feeding well.

Kingsnakes have digestion issues during colder temperatures and therefore avoid feeding in such an environment. Therefore, it is imperative you always monitor the temperature and humidity of your pet snake’s habitat.

If kingsnakes have eaten something obstructive that they cannot digest, their appetite might fall down rapidly. Take them to a vet as this situation might require surgery.

Likewise, if your kingsnake shows some symptoms such as wheezy breathing, sores, discharge, and discolored scales, it might be a sign of a disease or a parasitic infection. Immediate medical intervention is required in such cases.

Kingsnakes are a nightmare to most of the birds, rodents, and amphibians they share the habitat with. Well, these snakes do not even show mercy on their own relatives.

That being said, kingsnakes can also fall prey to multiple other predatory species that are above them in size and power. Raccoons, skunks, and red-tailed hawks are some species that are often found hunting and feeding on kingsnakes.

We hope to have provided you with all the information you were looking for regarding kingsnakes’ diet via this post. In general, these predators eat almost anything as long as they are readily available and they can overpower and gobble them without much trouble.

Do you own a pet kingsnake? If yes, share the dos and don’ts of taking care of kingsnakes with us. You’d be helping your fellow kingsnake parents out here!