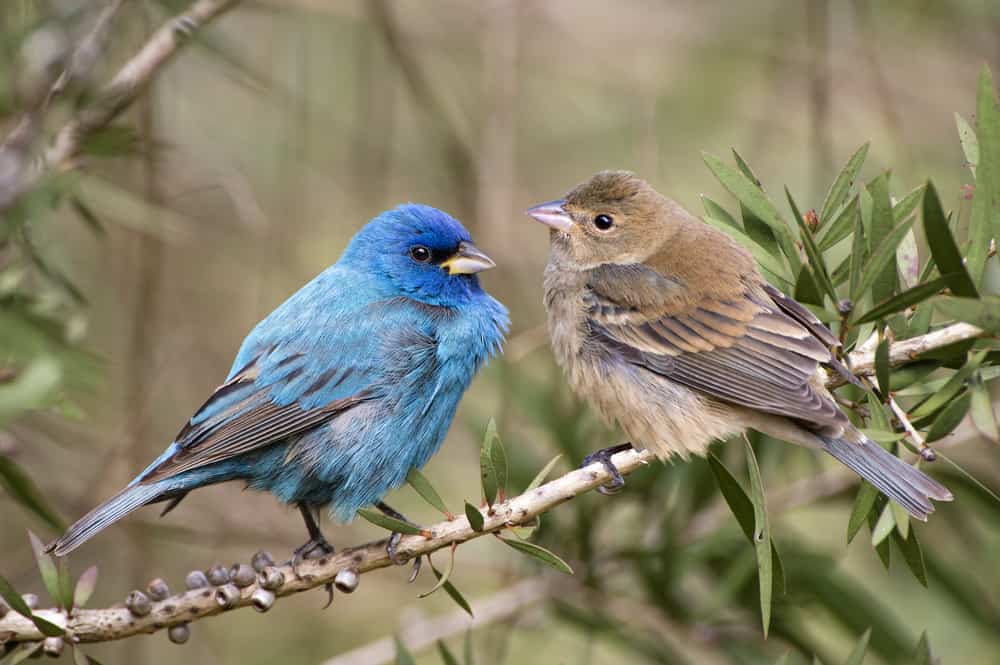 Indigo buntings are truly stunning little birds, bright cerulean and indigo blue in color, the males can be spotted throughout much of the United States, south-eastern Canada, and Central America.

They have been studied in great depth, and today we know a lot of truly incredible things about these surprisingly clever and social animals. With their sweet songs and beautiful appearance, it’s no wonder you’re here wanting to know more, as well, perhaps, as how best to spot them, or even how best to attract them to your garden.

In this Bird Lover’s 2022 Guide, we’ll walk you through the most important facts about indigo buntings, including what they eat during the winter and summer months, where they build their nests, how they forage and hunt, and – of course – what you can do to attract them to your home.

An introduction to Indigo Buntings 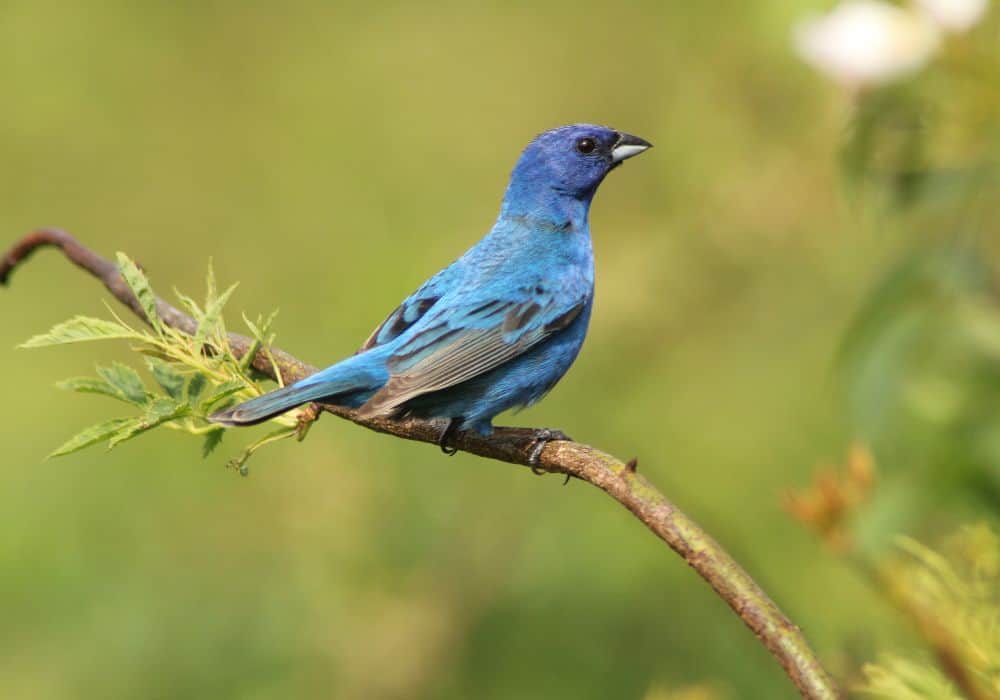 Indigo buntings are small passerine songbirds, distinctive for the bright blue plumage of the males. Females, on the other hand, are often much harder to spot, due to the fact that – like most species with sexual dimorphism – they are a much muter, duller brown in color.

Interestingly, the striking blue color of the male indigo bunting does not actually come from a blue pigment in the feathers of the bird, but instead from microscopic structures within the wings and breast feathers which reflect blue light rays and absorb the rest.

Indigo buntings are migratory birds which spend the summer months in North America, where they can be found from southern Canada to the eastern United States and southern Florida.

During this time, the male indigo bunting spends a lot of his time trying to attract potential mates, whilst the female hides away in hedgerows, shrubs and bush laying and hatching her eggs (usually 3-4 at a time).

During the winter months, indigo buntings can be found in Central America and some parts of northern South America.

Like many small passerine birds, indigo buntings can most commonly be found anywhere in which there is a dense growth of brush, bush, hedge and weeds, such as along the side of roads, fields, streams, rivers and in brushy canyons. This is where they breed and nest during the summer months.

Come migration time, and during winter, it’s more common to find flocks of indigo buntings grazing in the open. During these months, you can see indigo buntings in gardens, fields, on lawns, and in rice fields, as well as still amongst the brush and hedgerows as always.

Indigo buntings migrate to warmer climes during the winter months, flying south during the Fall (around September and October) to arrive in Central and South America (mostly in Mexico), only returning to North America to breed come Spring (around April) and Summer when the warm weather returns.

Interestingly, we now know (thanks to some experiments conducted with indigo buntings in captivity at a planetarium) that these tiny passerines navigate by the stars. They migrate at night, and have internal ‘clock’-like chemistry which ensures they are able to follow the stars even as the stars move across the sky. How cool is that!

Indigo buntings are social birds, and males learn their songs by listening to the songs of other males from birth (though, strangely, not to the songs of their own fathers). Careful study has shown that songs are different depending on the area, and can be passed down generation to generation, lasting among ‘song communities’ for as long as 20 years!

In the rural United States, You’ll most often find bright blue male indigo buntings during the breeding season atop telephone lines and in the uppermost twigs and branches of trees, belting out their songs for all the world to hear.

In a mirror of humankind, the vast majority of the work when it comes to child-rearing and home-building is done by the female indigo buntings, whilst the males devote themselves entirely to showing off and fighting each other.

Chicks of indigo buntings are hunted for and fed by their mothers, usually fledging the nest 9-12 days after hatching.

What do Indigo Buntings eat?

Indigo buntings are dedicated omnivores, eating both insects and small bugs as well as seeds and other plant matter. However, their dietary habits change based on the season and their need for feeding young. 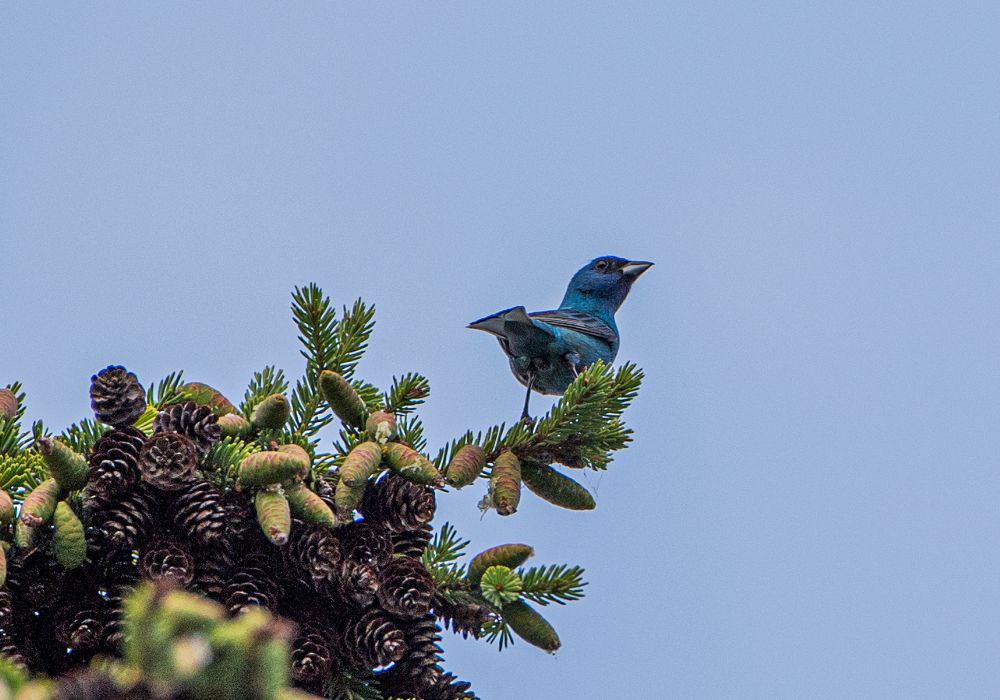 During summer, when indigo buntings need more energy for mating, laying eggs, and feeding young, they require extra protein in their diet. As such, they change their eating patterns to include a much higher ratio of insects, spiders, and other such creepy crawlies.

When indigo buntings first arrive at their breeding grounds in early Spring, they often snack on twigs and buds, as well as the leaves of aspen, oak, beech, elm, hickory, maple and cottonwood trees.

Later, in Summer, this diet changes once again and spiders and insects become the main food source. The Summer diets of indigo buntings, therefore, may include any and all of the following:

During migration, and over the winter months, the need for a protein-rich diet is lessened, and the eating habits of the indigo bunting change once more. During these months, they prefer instead to dine on small seeds, berries and buds.

It is, as you’ll soon learn, during these months that you’re most likely to be able to attract indigo buntings to your garden.

The Winter diet of the indigo bunting includes the following:

In contrast to their hunting methods of the Summer months, indigo buntings tend to forage in groups during migration and in the winter.

Where do Indigo Buntings build their nests?

Female indigo buntings build their nests alone, often whilst the male partner watches on. Early in the breeding summer, this process can take as long as 8 days, whilst closer to mating it may take only 2. She prefers to build her nest in low-lying vegetation, within at least a meter of the ground. Sometimes, she’ll choose to build it in weeds like goldenrod, whilst other times (though rarer) in crop such as soybeans or corn.

The nest of the indigo bunting is an open cup made out of leaf matter, grass, stems and bark, and is wrapped all over, beautifully, with spider web. The inside of the indigo bunting’s delicate little nest is lined with more grasses, smaller roots, very thin strips of bark, thistle down, and sometimes even hair from deer.

Indigo bunting nests are about 1.5 inches deep and have an average diameter of around 3 inches. Unfortunately, due to the low-lying nature of indigo bunting nests, they are at risk of predation from egg-stealers and carnivores such as red foxes, raccoons, opossums and the like.

How to attract Indigo Buntings to your garden 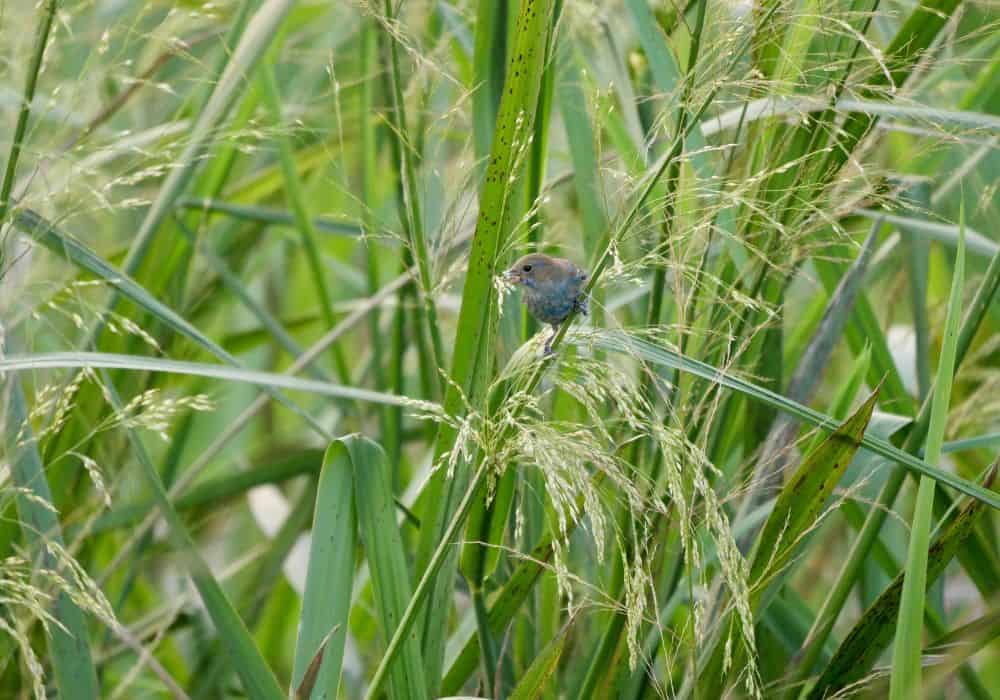 Understandably, you’ll be wondering if it’s possible to attract indigo buntings to you garden, as these dainty songbirds are not only a joy to watch, but also to listen to. Unfortunately, for most of the Summer you’ll find it pretty hard to lure them in, since they much prefer to hide away in thick brush.

Thankfully, however, during their migration south you’ve got a good chance of attracting indigo buntings to your home or garden with some carefully chosen feed. Indigo buntings are fairly picky, meaning that you’ll need to use specific feed, and will be unlikely to have much success with a traditional bird feeder.

Instead, we recommend you opt for a backyard bird table, find feeder or tray feeder, and use some (or all) of the following:

With a combination of the above, you’re much more likely to attract indigo buntings to your house. If you want to opt for white proso millet, you could actually set this out in a more traditional feeder, but we do recommend you to do so right at the start of spring, to try and attract buntings as soon as they arrive in your area.

Additionally, you could also choose to plant some of the types of bushes, plants and shrubs which indigo buntings love to forage from and, sometimes, nest in. Here’s a list of bushes you could plant in your garden in an attempt to lure in a bright flash of blue or two:

In addition to their fruit, these plants attract a lot of the insects which indigo buntings love to eat.

One of the most beautiful songbirds in North America, the indigo bunting is a bright streak of blue found in brush and hedgerows from southern Canada to southern Florida during the Spring and Summer months.

The indigo bunting’s conservation status has been listed as ‘Least Concern’, however unfortunately their population has been slowly dwindling by about 0.62% per year.

From 1966-2019, the overall population of indigo buntings has fallen by about 28%. Increased urbanization, over-frequent mowing of roadsides and field-sides, as well as reforestation and intensive agriculture all play a part in damaging indigo bunting numbers.