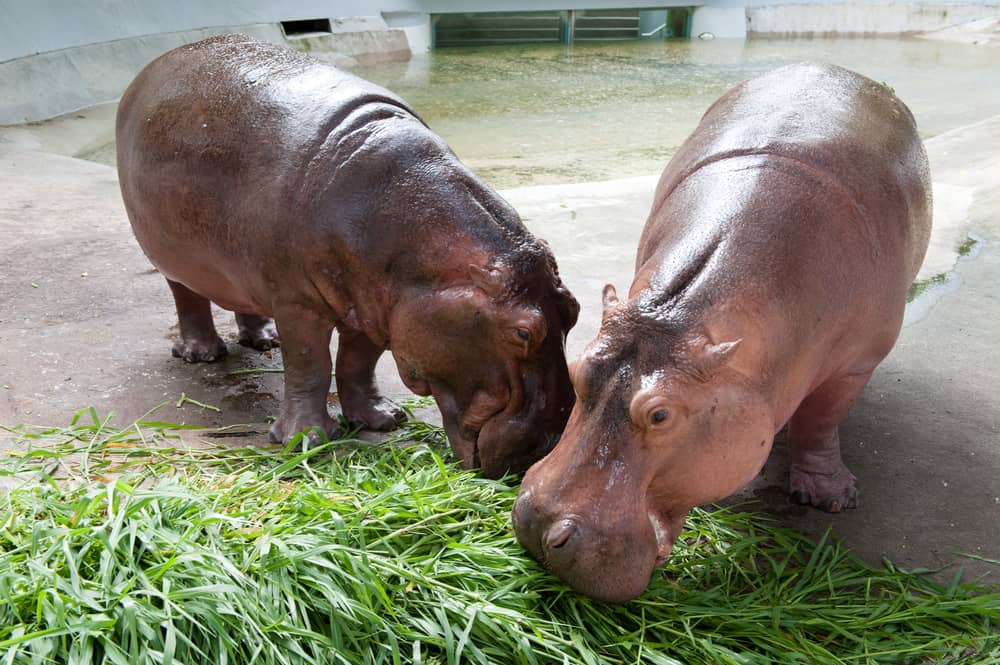 The hippo is a large animal that originated in Africa. Its name means ‘water horse’ or ‘river horse’ in Greek, even though it is more closely related to a pig, dolphin, and whale. You can’t effortlessly see what do hippos eat since it does this activity during the night. So, let’s solve the mystery.

On the other hand, the Pygmy hippo is only a sixth the Common hippo weight. It is approximately 60 inches (1.5 m) long, with a 6 inches (15 cm) long tail. Its skin is greenish-black on the back with a grayish-white bottom part.

The life expectancy of a hippo is 35 to 50 years in the wild. The most Common hippos can reach up to 60 years in captivity, while Pygmy hippos live 40 to 45 years in managed care.

Even though this giant spends at least 16 hours a day in the water, it is not an excellent swimmer at all. Interestingly, hippos always choose to come out and enjoy their meal on the ground.

Typically, these water animals live in groups called the school, but you can also hear terms like a siege, bloat, and pod. Each school usually consists of about 10 to 30 females and males, but it is not rare to see up to 200 members living together.

After a gestation period of eight months, a Common hippo female gives birth to one calf that weighs 50 and 110 pounds (22.5 to 50 kg), while a Pygmy hippo baby is only 13 pounds (6 kg) heavy. The baby becomes fully mature at 5 to 7 years old and can live approximately 35 years.

Even though cartoons show them as cute ballerinas, hippos are loud, aggressive, and highly dangerous animals. For instance, an adult male can effortlessly crush a human head between its molars.

While you can see Common hippos all over sub-Saharan Africa, Pygmy hippos live primarily in Liberia. Those animals are not in danger of extinction at the moment. Unfortunately, the loss of their habitat in sub-Saharan Africa because of the Sahara Desert expansion and human activity makes this scenario quite certain in the future.

Hippos never eat in the water and don’t enjoy aquatic plants. Even though this animal enjoys living in a group, it will always eat alone. As far as it is concerned, feeding is a nocturnal activity and includes grass, reeds, and green shoots.

This animal will pull the grass up with its lips and tears it with teeth before swallowing. Chewing is not the preferable activity for it. Plus, it will always avoid coarse grass with strong roots and never nibble the dirt or buried roots. 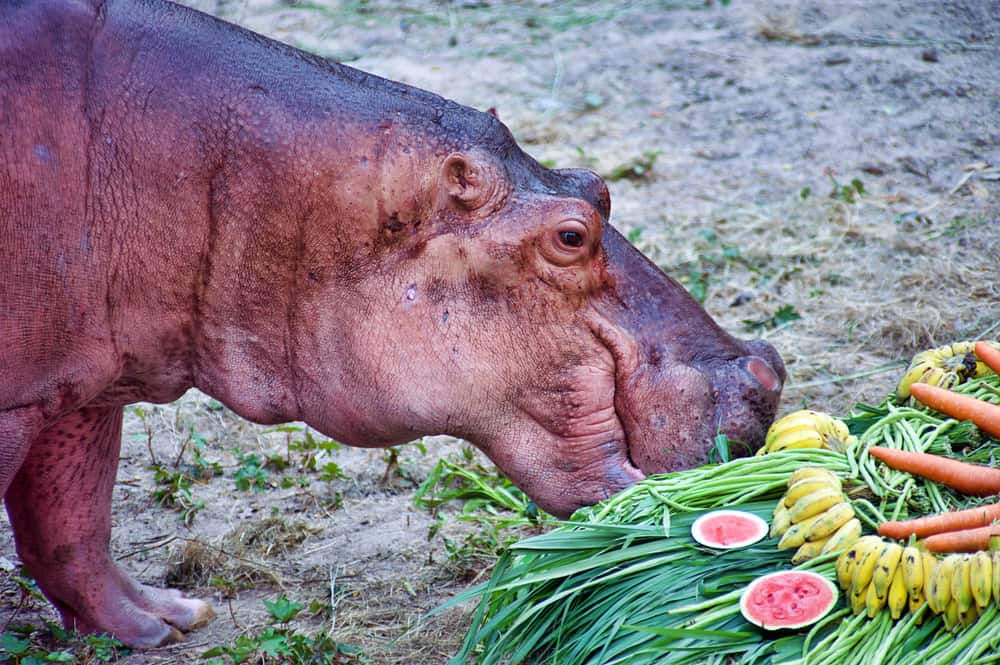 It is estimated that an adult male can eat at least 90 pounds (41 kg) of grass at once, or about 1 to 2.5% of its body weight. A long digestive system allows reducing the digestion speed and increases the time of vital nutrients absorption.

A calve (baby hippo) comes to this world with an impressive 90 pounds (41 kg) and requires significant quantities of food from the very beginning. Its mother will nurse it underwater for six to eight months, but the baby will start eating grass three weeks after birth.

Believe it or not, a hippo can store food in its multi-chambered stomach and miss a meal for three weeks when circumstances are unfavorable. In most cases, this giant will eat:

Dehydration is the most serious danger hippos are prone to. Besides, spending a few hours out of water will severely jeopardize their health. Remember that a calve will become dehydrated faster than an adult because it doesn’t get water through plants.

Be aware that the hippo diet in the ZOO is a bit different than in the wild and is usually a combination of:

Interestingly, you will see this animal eating watermelon in the ZOO, but it never consumes this fruit in the wild. The reason is simple. There are no watermelons in their natural habitats!

Even though hippos are herbivores, they can occasionally consume animal carcasses, including other hippopotamuses. Scientists have confirmed that this animal can eat meat when the food sources are limited, but it is not their regular diet.

However, it is probably a result of nutritional stress and unhealthy behavior since this animal’s stomach anatomy is not adapted for a carnivore diet. On the other hand, the hippo is capable of tearing apart most animals, including:

That makes this aggressive animal the most dangerous creature living in the African savannah. 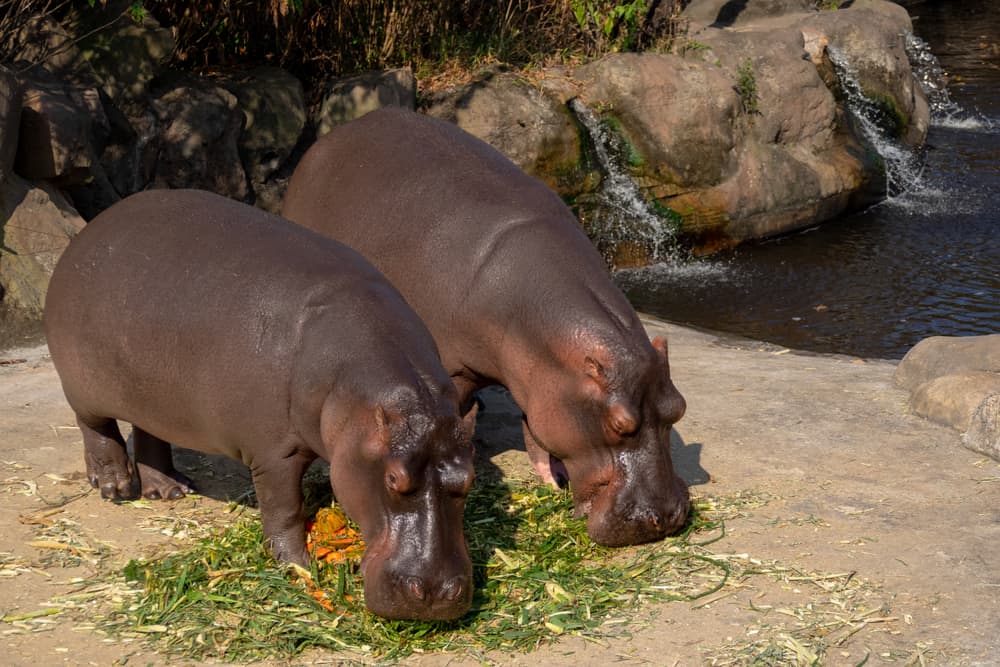 As I have already mentioned, hippos are herbivorous, and they don’t eat meat. However, harsh weather and adverse circumstances sometimes force these animals to eat:

It can be a rare or regular behavior, depending on the group. In some hippo populations, a meat diet can become routine, but no one can guess the reason for this feeding change. Their anatomy and intestinal flora are against meaty meals, and only substantial nutritional stress can lead to this unhealthy behavior.

Some scientists believe that it is actually the hippos behavioral ecology and only an inability to bite into flesh prevents hippos from being omnivorous and cannibals. In other words, those of them that can eat meat will do it.

Even though it is still considered an unusual diet, hippos actually can digest animals they kill, including:

However, it seems that hippos avoid such a meal unless droughts, lack of food, or a convenient opportunity to run into a carcass have forced them to change their regular habits.

In some cases, hippos in zoos can kill and eat animals they manage to reach, like:

On the other hand, hippos never eat fish and avoid consuming aquatic plants, but no one knows why this is so.

Unlike other herbivores, hippos never chew their food. Their stomachs with three chambers and long digestive systems are well-adapted to their feeding habits. They are highly efficient in using vital nutrients from the grass.

This nocturnal animal typically leaves the water at twilight on its own and goes to grazing 2 to 6 miles (3 – 9.5 km) away from its habitat. However, you can see a hippo looking for a new home 30 miles (48 km) away when water or food in the environment runs out.

Male hippos are always territorial when it comes to matting, but they like sharing grazing ground. Since they are large animals that consume huge amounts of food daily, you can expect them to alter their environment. As a result, they create new habitats for other species.

Hippos have enlarged incisors and lower canines that never stop growing. Their canines often reach 20 inches (51 cm), while incisors are approximately 16 inches (40.5 cm) long. Their bite force is 2,000 pounds (907 kg) per 1 sq inch (6.5 cm2), making these animals the most dangerous in Africa.

Plus, they can open their mouths 150 to 180 degrees. However, both traits have nothing with feeding but with defending themselves.

Hippos are herbivores that enjoy eating short grass and fallen fruit. These nocturnal animals can go up to 6 miles  (9.5 km) in search of food. Thanks to a highly efficient stomach system, they can consume a considerable amount of grass at once and survive three weeks without a bite.