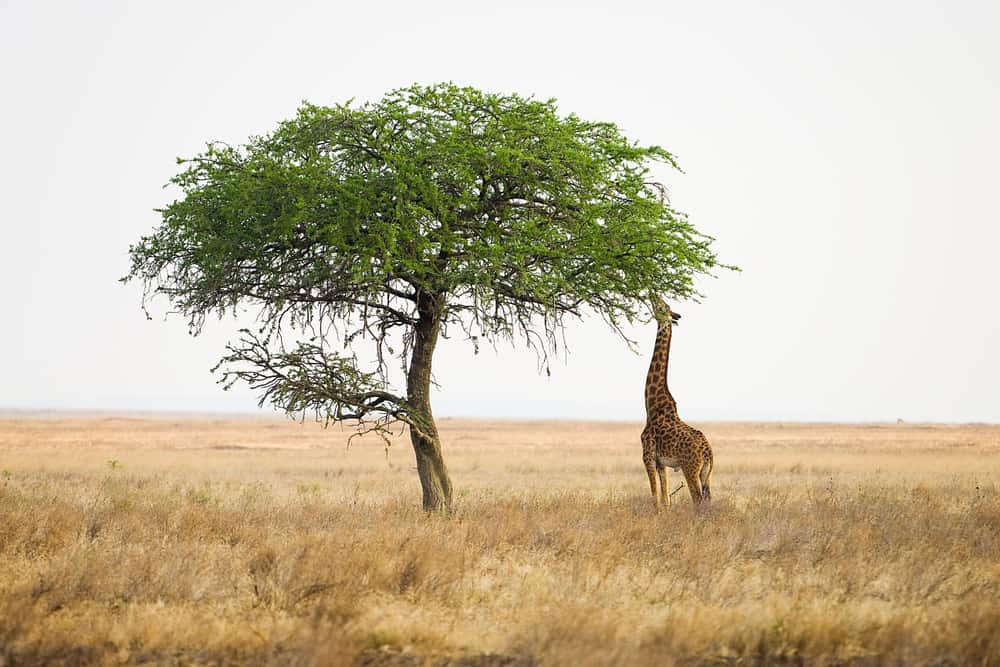 With a 6 to 7 feet (1.8 – 2.15 m) long neck and legs other same length, giraffes are the tallest living land animals. Even though its back legs look shorter, both front and back ones are approximately the same length.

Most people recognize their spotted pattern fur and a small hump on the back, hence the Latin name Camelopardalis (camel-leopard). You can recognize four giraffe species and five subspecies, and each of them has different eating habits. Let’s see what do giraffes eat. 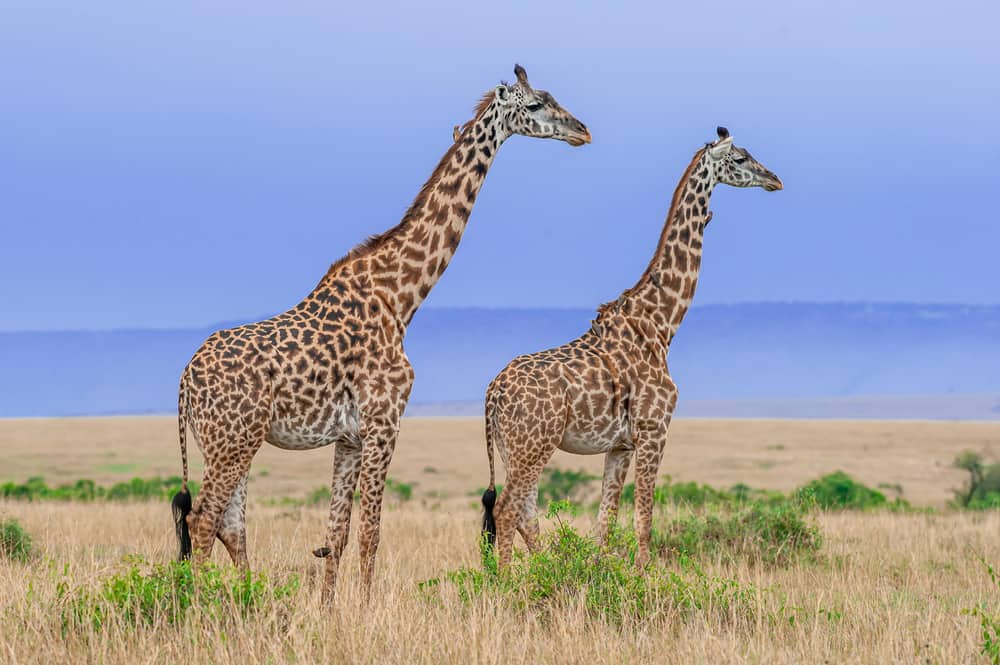 Giraffes are quickly recognized for lengthy necks and two ossicones, weird, horn-like structures on their head tops. Additionally, each animal has uniquely patterned spots over its body that allow accurate identification.

You can recognize four distinct giraffe species, including:

It is estimated that approximately 117,000 giraffes live throughout Africa. This number varies depending on sources and the current situation in the field.

Unfortunately, these unique animals are already extinct in seven African countries. The sad truth is that over 50% of newborn calves don’t survive the first year in some populations.

Giraffes diet in the wild 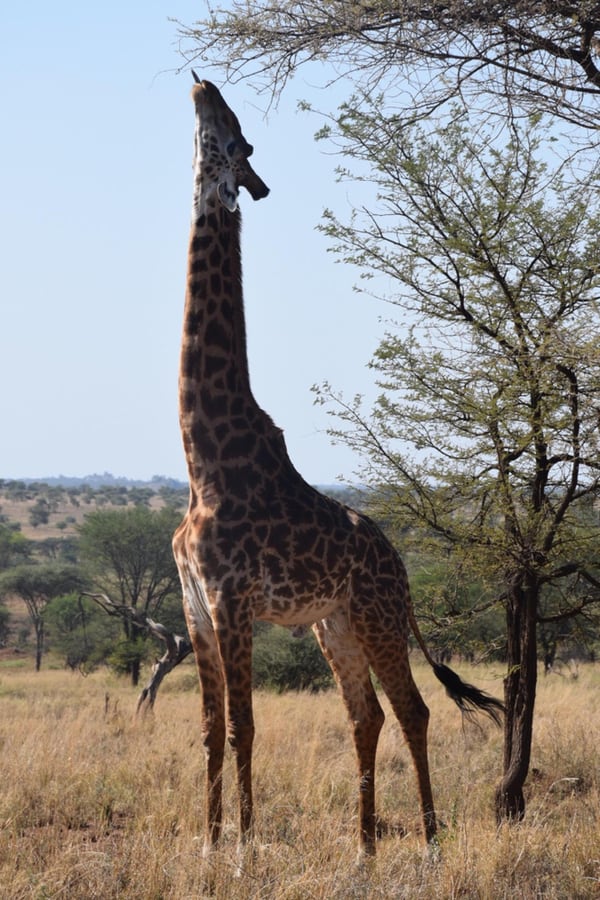 Typically, giraffes spend at least 18 hours or 75% of their day browsing for food, eating, and chewing the cud. They choose to pick out leaves in the morning and evening, while the period in-between and most of the night time is reserved for ruminating.

Since four giraffe species and five subspecies live in the world nowadays, you can expect each to eat food available in their habitat.

Scientists noted that male giraffes’ diet contains higher fiber and lignin levels while females pick out more herbs richer in nutrients. That tendency helps females feed calves even during the dry season. They will also enjoy the flowers full of proteins during the blooming season.

Giraffes are herbivores that get necessary nutrients by constantly chewing, almost exclusively leaves. An average adult giraffe needs up to 75 pounds (34 kg) of food a day. Taller males effortlessly reach higher branches, allowing females to consume the lower ones.

They can eat various leaves but usually prefer the Acacia tree. Thanks to long thorns between the leaves, this tree quickly deter most animals. However, thorns don’t bother giraffes that use their 18 to 20 inches (46 – 51 cm) long, thickly lined tongues to maneuver around them.

Plus, thick and sticky saliva protects these animals from inadvertently swallowed thorns. It is the glue consistency and efficiently prevents any possible injuries.

Vegetation off of the ground

Giraffes are browsers and can eat many other things besides their favorite leaves. They will also consume:

Since these animals have plenty of Mimosa trees at their disposal, you can often see them eat these easy-to-reach plants whenever possible.

This plant contains a poisonous milky latex. Most animals die after eating the Euphorbia tree in large quantities, but not giraffes. They nibble it in small amounts when there is insufficient food in winter and let poison inside their blood system at low levels. That way, they use it to clean their bodies from internal and external parasites.

Prickly pear fruit is a delicacy, but animals avoid this juicy plant covered by sharp spines that make it challenging to consume. However, giraffes will use their long tongues to feed on these nutritious plants in winter.

Believe it or not, giraffes enjoy chewing old bones (osteophagy) when their diet lacks calcium and phosphates. In most cases, you will see pregnant females doing such a thing.

It can sound weird, but this herbivore can consume meat during a dry season when it can’t find preferred food. In such a case, the hungry giraffe starts looking for other food sources, including animal carcasses. In some cases, giraffes can spot a dead body and taste it because of curiosity.

It is estimated that at least 2,000 giraffes live in Zoos worldwide. It is crucial to feed these animals like in Africa, so most zoos offer them Acacia leaves hung in piles. That is an efficient way to mimic the tall trees they typically find in the wild.

Such diet prolongs giraffes’ life. Unlike animals in the wild that rarely live longer than 20 years, the lifespan of those in captivity is 28 years on average. 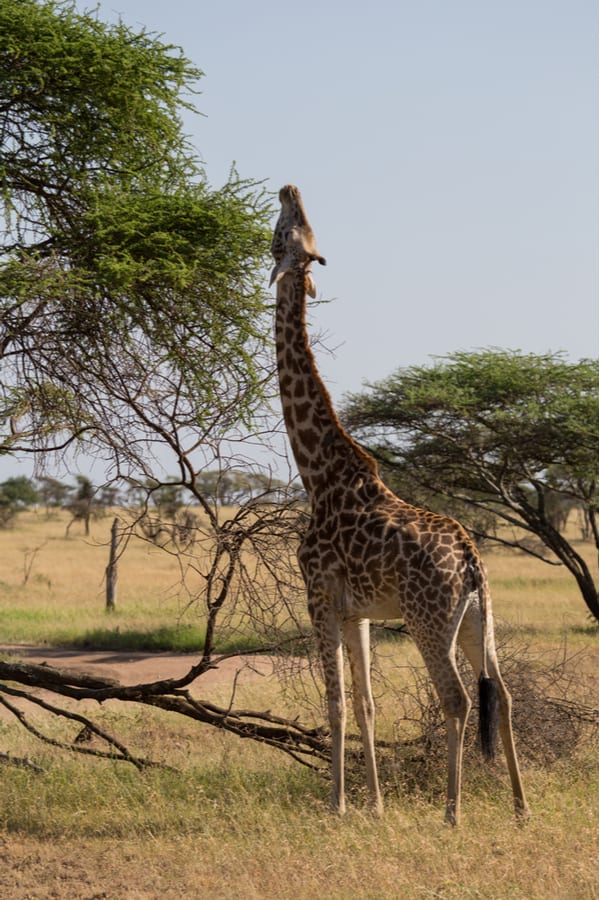 A calf is born by the front legs coming out first. Only then do the head, neck, and shoulders come out. The 3 feet (0.9 m) long umbilical cord breaks up midway through the birth, and the newborn calf drop to the ground, causing it to start breathing.

The calf will be able to walk after an hour. Even though it starts eating leaves as soon as it is four months old, it will keep suckling until six to nine months of age.

Each calf is pretty obedient and can sit and wait for its mom for hours. Once it gets older, a giraffe mom will leave it in a nursery with other calves.

While one of the giraffe moms looks after calves, others look for food and socialize. It is an excellent system of developing social and physical skills and exploring surrounding through play.

As I have already mentioned, the giraffe is well equipped to consume Acacia tree leaves and avoid sharp thorns. They don’t need to compete for food since they can effortlessly reach even the tree’s highest parts thanks to their 6 to 7 feet (1.8 – 2.15 m)  long neck.

They are ruminants, so they eat a large amount of food and then throw it up, chew it once more, and swallow it a second time. This process is complicated since food has a long way to travel through such a long neck, but giraffes have particular oesophageal muscles that help regurgitate.

Giraffes’ stomach has four sections, including:

After consuming food, it comes to the rumen, where microbes start fermentation. Partially digested food (cud) returns to the mouth, and a giraffe chews it again. In the end, it goes to the second stomach, passes through the 70 feet (21.5 m) long intestines, and finally comes out as pellets.

Giraffes have unusual blue or dark black tongues. This color is crucial to protect them from sunburns since these animals eat all day long.

As I have already mentioned, giraffes are herbivores that live in Africa, and they can’t find enough food year-round. Therefore, they can quickly change their eating habits to adapt to various seasons.

Once a dry season comes to already arid savanna, giraffes will migrate large distances to find enough food. Another option is to include new vegetation types in their diet, like:

As you can guess, the vegetation will become abundant during this period of the year thanks to numerous rainy days. That is a season when giraffes tend to gain as much energy as possible by consuming:

Winter in Africa is the warmest time during the year, but mornings and nights can be pretty chilly. This time is challenging for herbivores to find enough quality food. In such circumstances, giraffes will look for adequate ingredients necessary to keep the required energy level, including: 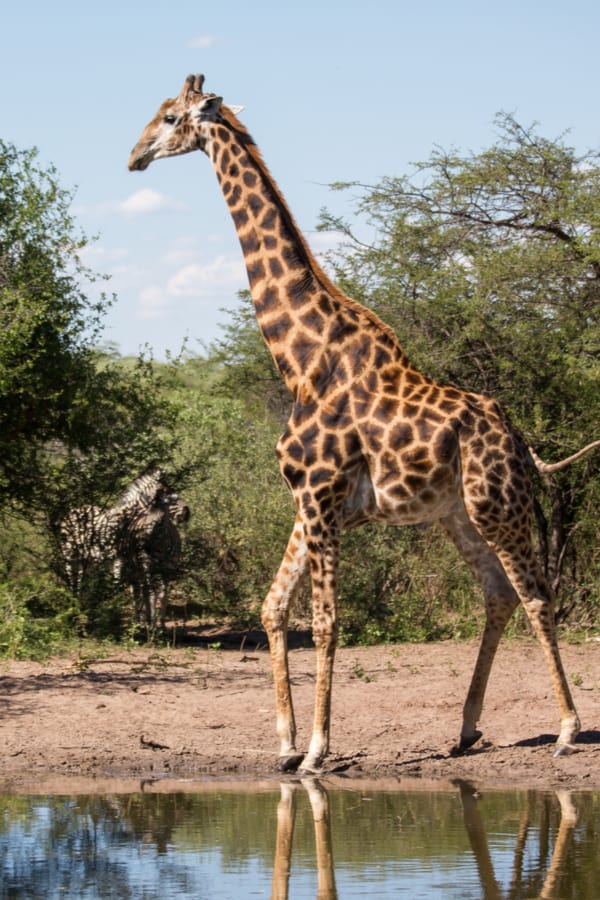 Giraffes are moderate drinkers and need less water than you can expect. On average, adult animals need 2 gallons (7.6 l) of water a week.

Since the position with their head down while drinking makes them highly vulnerable, they are careful with consumption. Instead, they get the necessary moisture from leaves and can survive weeks without water.

On the other hand, captured giraffes will take advantage of easily available water and drink about 10 gallons (37.8 liters) a day.

Giraffes are herbivores that prefer eating plants but are also browsers that pick out favorite leaves whenever possible. Since they are tall with long necks, they can reach any food they want, no matter its high position.