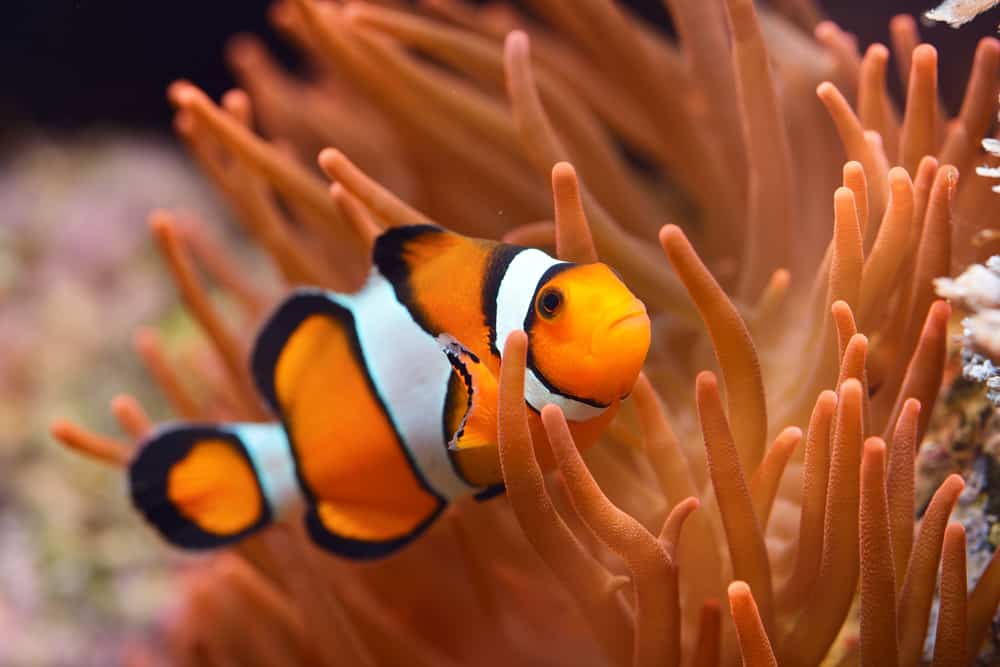 Clownfish is a popular option to keep in indoor tanks and aquariums. They’re colorful, easy to take care of, and obviously, were featured in Finding Nemo!

In this article, we’re going to explain everything you need to know about feeding your clownfish, from what foods to give, to how much and how often you should do it.

There are about 30 different fish species that are called clownfish or anemonefish. As a result, clownfish size differs from species to species, ranging from 3 inches (3 cm) long in the true percula, to 6 inches (15 cm) long in the maroon clownfish.

All species of clownfish live in lagoons and reefs located in tropical waters around the Equator, including portions of the Pacific and Indian oceans, and the Red Sea. The most interesting thing is that, unlike most fish, clownfish don’t spend most of their time in the water.

Well, they do, but more specifically, the main clownfish habitat is the tentacles of anemones. These polyps are venomous and can sting, injecting a paralyzing neurotoxin into the prey.

Touching the tentacles acts as a trigger for shooting the venom, but clownfish are protected from that by a layer of mucus. However, other fish, like those that can eat clownfish, don’t have protection from the neurotoxin.

It means that clownfish can safely live around the tentacles of anemones, being protected by them. Unfortunately, the popularity of clownfish as a pet led to a mass reduction in the wild population, and even anemone tentacles can’t protect them from being snatched by humans.

Some of the most popular clownfish species that are kept in indoor tanks and aquariums include:

What Do Clownfish Fish Eat?

Clownfish are omnivores, meaning they can consume and digest both, animal-based and plant-based foods. As a result, their diet consists of many different things, so let’s start with how it looks in the wild.

In the ocean, the diet of a clownfish depends on another animal, called a sea anemone. There are about 1,000 species of polyps called sea anemones, but most of them spend their entire lives attached to a solid base like rocks or corals at the seabed.

While not looking like your usual marine animal, they’re in fact, animals, and even carnivorous and predatory. As a result, clownfish frequently eat carrion left by anemones.

In exchange for protection and occasional snack, clownfish defecate nearby, allowing anemones to eat the feces and get some nutrients. That’s one of the most unique mutual symbiotic relationships found in the ocean. 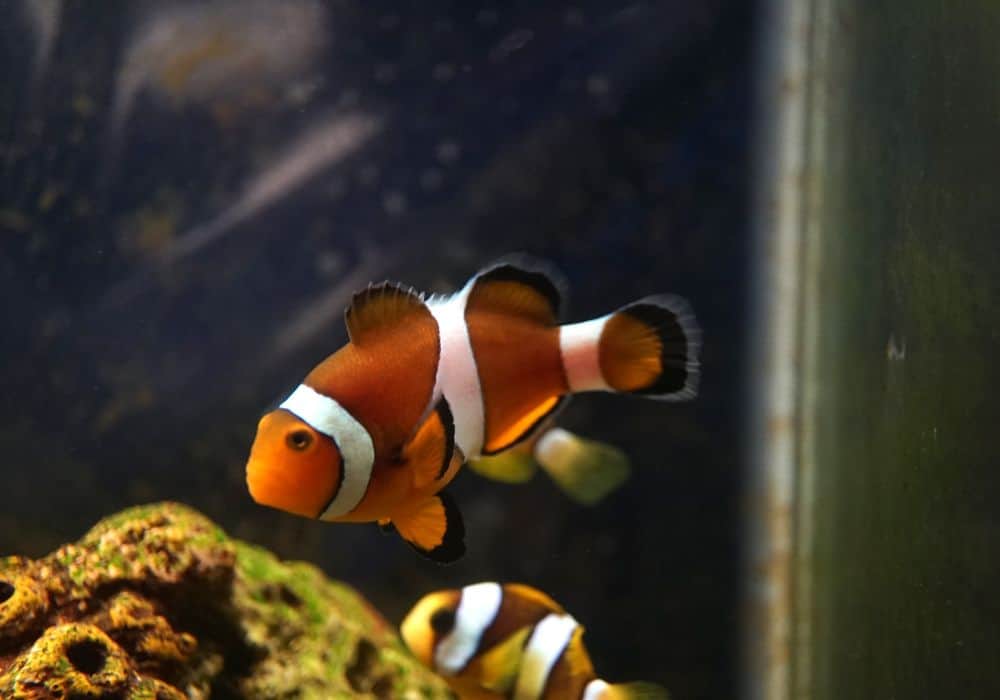 Such a varied diet might sound intimidating to many novice fish keepers. However, you shouldn’t worry about not being able to replicate it at home in your tank or aquarium. Here are some of the most popular food options you can feed to your clownfish:

This is one of the most popular food options among both, beginner and experienced clownfish owners. It’s because fish pellets are a complete meal, featuring the right balance of carbohydrates, protein, and fat that your clownfish requires to grow big and healthy.

Some premium brands of fish pellets even come fortified with minerals and vitamins, ensuring that you don’t need to supplement the diet with any other food items.

The only downside of fish pellets is that most of them sink to the bottom, making them difficult to remove if left uneaten. Fortunately, there are floating varieties, that take care of this problem.

As great as fish pellets are, you have to remember that you should only buy fish pellets that were made for clownfish, instead of other species of fish. As every fish requires slightly different nutrition, buying the wrong fish pellets could lead to health problems for your fish.

The only other option besides fish pellets is a viable choice for the basis of your clownfish diet. Just like pellets, fish flakes are a full meal, featuring a well-balanced nutritional profile, giving your clownfish everything it needs to survive.

The main drawback of fish flakes is that they start decomposing quickly, ruining the water inside your tank or aquarium. However, not putting too many flakes and changing the water filters frequently will prevent any problems related to that.

If you want to supplement the diet of your clownfish, you can occasionally feed it wafers or tablets made of algae, and seaweed sheets. Such goldfish food consists of many nutrients that your fish otherwise might lack from a diet entirely consisting of fish pellets or flakes.

Such foods are almost as nutritious as live food and are packed with nutrients including minerals and vitamins, which your fish might lack from feeding it a diet consisting solely of fish flakes or pellets.

However, if you choose a high-quality brand of fish flakes or fish pellets, you shouldn’t worry about that and see frozen foods not as a necessity, but as an occasional treat. The only thing you have to be aware of is thawing frozen food before feeding it to your fish.

There are two methods of defrosting such fish food. The first one is simply leaving it overnight in your fridge, allowing it to slowly thaw and be ready to be fed the next day.

Another option is to put the food into a Ziploc bag, submerging it into a bowl of cold water for about an hour. Leave the tap slightly running, so the water constantly remains cold and doesn’t heat up, preventing the food from spoiling. 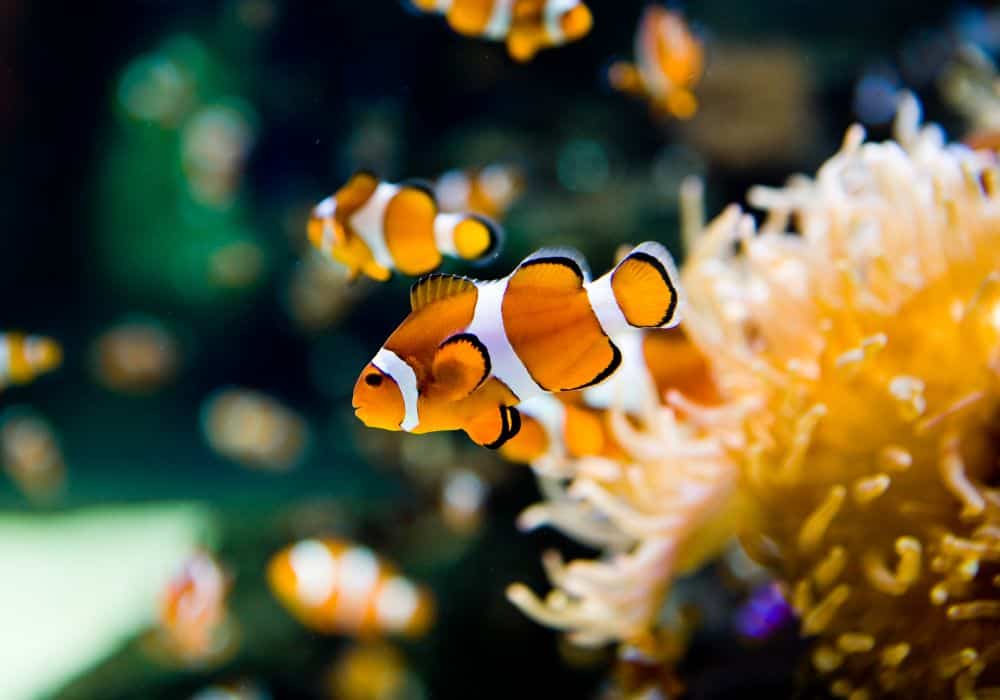 How Often and How Much Do They Eat?

Most clownfish owners feed adult specimens once a day while feeding juvenile fish (up to 1.5-2 years of age) several times per day, up to 4. The more times you feed your fish per day doesn’t really bring more benefit but rather takes up the time from your day.

Naturally, if you’re feeding your fish three times per day, divide the amount into three equal portions, so you don’t overfeed it. That’s very important to understand because it’s much easier to overfeed your fish than to starve it.

Clownfish aren’t that well-equipped to protect themselves from predators in the water. They’re small and swim slow, making them perfect for bigger predatory fish to prey on. Basically, any carnivorous fish that’s faster and bigger than clownfish are likely to prey on it.

As a result, there are many marine animals that eat clownfish, including:

There are over 25 species of barracuda, all of them inhabiting areas of tropical water in the Red Sea, the Indian Ocean, and the Pacific Ocean. All of them are known to be incredibly fast swimmers, some species reaching the speed of over 25 mph (40 kph).

Barracudas have long snouts and sharp teeth, making them capable of preying even on larger prey than themselves. Instead of swallowing larger fish like they would swallow clownfish, barracudas start feeding on such prey bite by bite, while it’s still alive.

This type of fish needs no introduction, being characterized by a unique flat appearance and a seemingly smiley face on the underside. There are about 200 species of stingrays, mostly inhabiting tropical salt waters.

The unique body and fin structure make stingrays incredibly agile in the water, making it easy for them to capture clownfish.

Many species of marine turtles, including hawksbill turtle, leatherback sea turtle, and green sea turtle, also prey on clownfish. They’re faster than clownfish and have powerful bites that leave no chance for clownfish to fight back.

The last notable predators of goldfish are numerous species of sharks and eels. They include some of the most well-equipped marine hunters, so it should come as no surprise that sharks and eels are frequently feeding on goldfish. 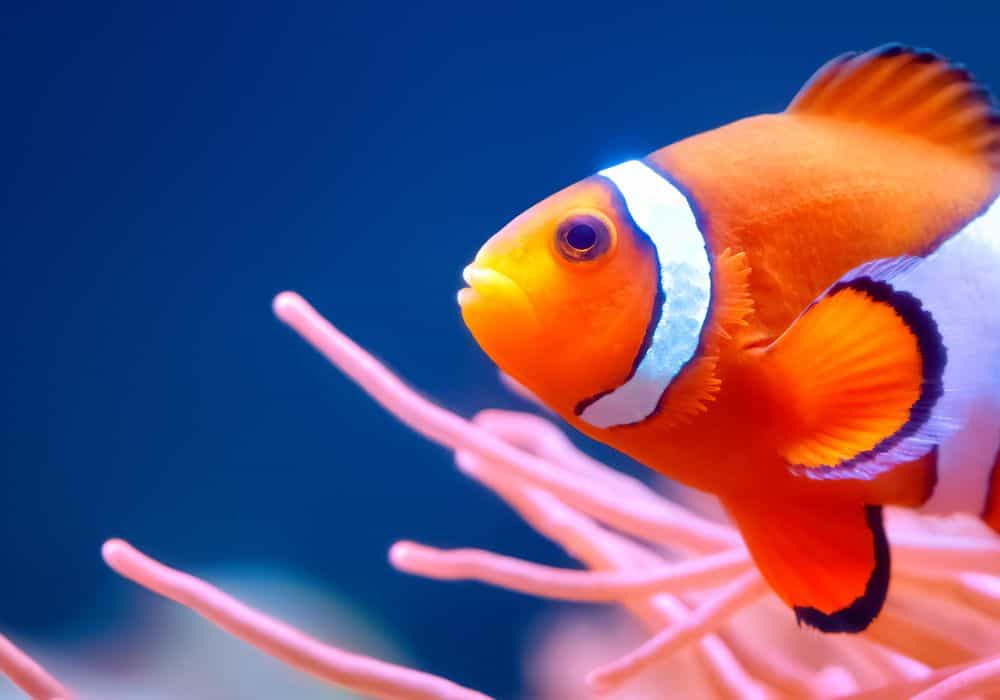 Here are some additional tips and tricks on properly feeding your clownfish:

Now you know everything related to feeding your clownfish! Remember, less is better, and your clownfish won’t get too upset about not getting that one extra pellet!