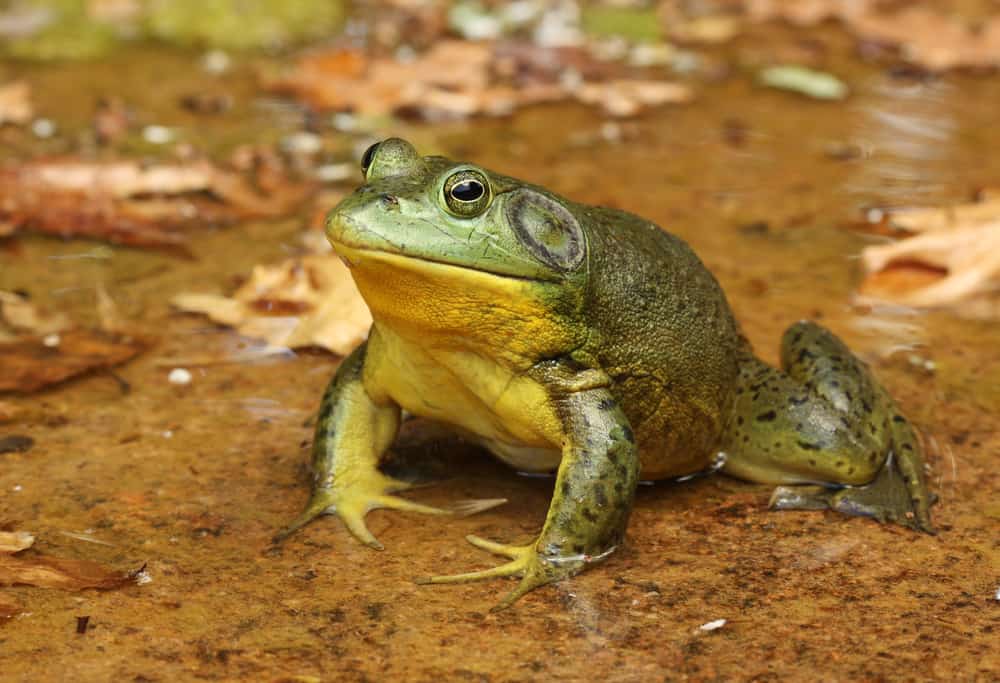 If you’ve walked alongside a pond or wetlands recently, you’ve probably come across the bullfrog. Known for their appearance, unique style of movement, and the sounds they make, these amphibians play a vital role in their ecosystem as both predator and prey.

I think bullfrogs are so cool, and understanding their diet helps us humans live alongside them in harmony. And since they do so much for us, we should treat them and their habitat with respect.

To know more about what bullfrogs eat, where they live, what they’re like, who eats them, and other relevant information you may not have heard before, read on!

1. The Physical Characteristics of Bullfrogs 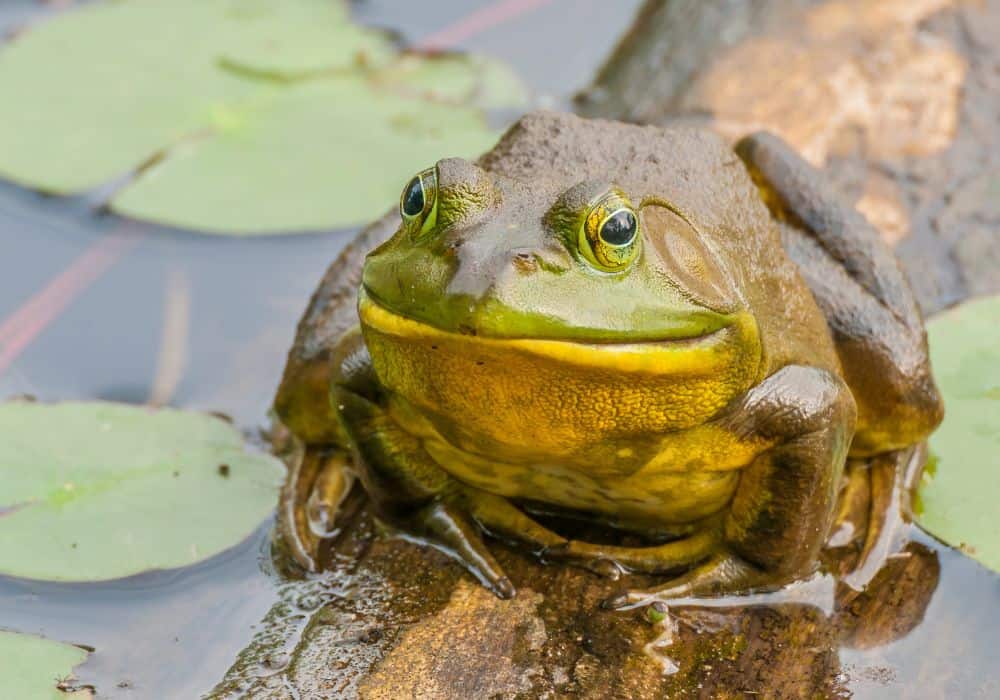 Bullfrogs can weigh up to 0.5 kg, making them the largest real frog in North America. Typically these frogs are between 101 and 175 mm lengthwise, though some can be as long as 460 mm.

Bullfrogs can be several shades of green and brown, and often they have dark splotches on their backs. Both males and females have fully webbed feet, but male bullfrogs have a larger tympanum; the tympanum is a membrane that goes over the hearing organ.

Also, a male will have a yellow throat during breeding, whereas a female’s throat will be white.

North American bullfrogs are active in the warmer months and they hibernate during the colder months. While some bullfrogs bury themselves in mud before hibernation, others build shelters that resemble small caves to hibernate in.

Bullfrogs are sit-and-wait predators, meaning they’ll patiently wait for prey to come within range of their quick, sticky tongue. They are active during both day and night, and they are most active when it’s humid and warm.

Most bullfrogs live seven to nine years, though bullfrogs kept in captivity can live 15+ years. In the north, the breeding season for bullfrogs lasts from May to June, whereas in the south they breed from February to October.

A female will lay about 20,000 aquatic eggs in still, protected water, and the eggs will be fertilized by one male. After fertilization, tadpoles will emerge from the eggs.

It takes a tadpole five years to become an adult frog. Before becoming an adult frog, a bullfrog tadpole will become a froglet at about age three. The speed of development (transformation) for tadpoles is on the slower side.

For a while, there were no North American bullfrogs west of the Rockies, but in the early 1900s, they were deliberately introduced to California and Colorado. And outside the U.S., they can be found in parts of southern Europe, Mexico, South America, Africa, and Asia.

Bullfrogs can be found living near lakes, ponds, rivers, and bogs. They like the water to be warm, shallow, and calm, and they prefer warm weather.

Bodies of water that have been polluted by humans tend to have higher temperatures and more plants, making these bodies ideal for bullfrogs, as they promote growth and reproduction and help bullfrogs evade predators.

4. What Do Bullfrogs Eat? 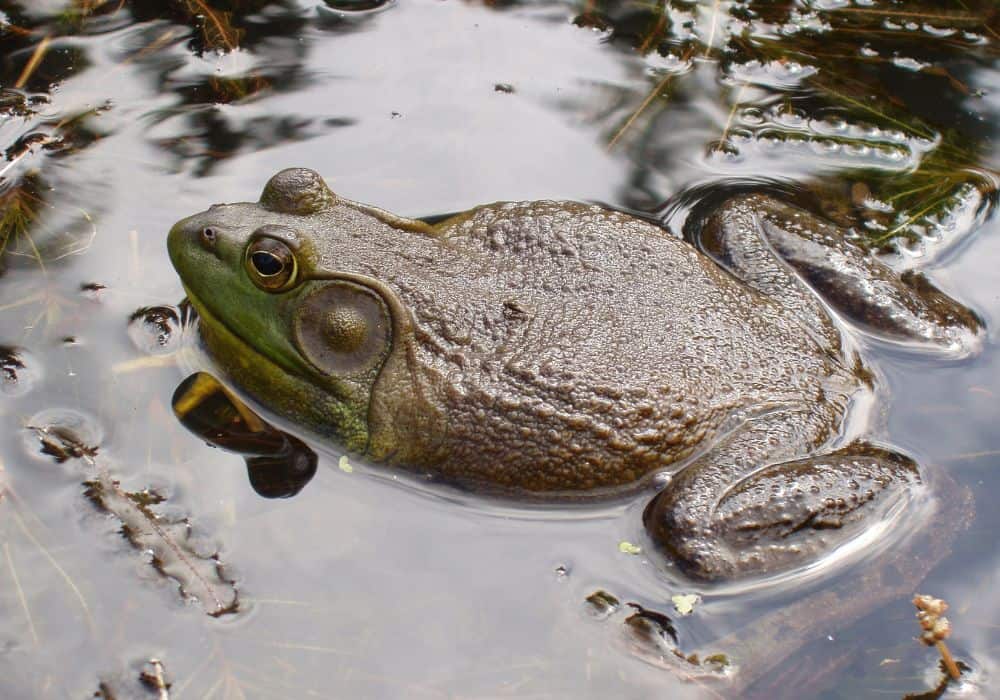 In the wild, bullfrogs consume water snakes, spiders, crickets, crustaceans, worms, fish eggs, and salamanders. They also eat other native frog species and tadpoles. They are cannibalistic, feasting on their own kind when other sources of food aren’t available.

In captivity, a bullfrog is fed a diet that mirrors what it would eat in the wild. Specifically, they’re fed mealworms, small crustaceans, insect pests, and small lizards like newts. In captivity, they are not fed fish eggs, other bullfrogs, or tadpoles.

5. How Much Do Bullfrogs Eat? 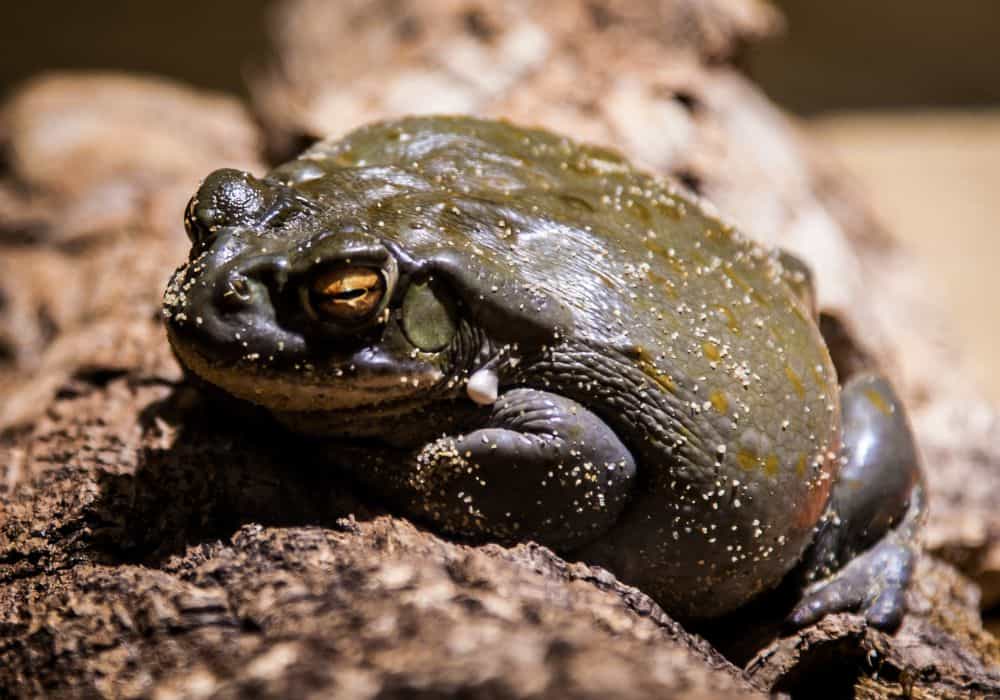 An adult bullfrog will eat daily or every other day. In general, they can survive off two to three meals a week. A bullfrog will eat in the evening and in the daytime, and they will not stop hunting until they’ve had enough to eat.

What a bullfrog eats largely depends on when it’s hunting. For example, if it’s hunting during the day, it has a better chance of catching insects and small lizards, whereas at night it will have to feast on fish eggs, water snakes, and other prey that’s active in the evening.

6. What Eats A Bullfrog?

Bullfrogs are prey for humans, herons, turtles, water snakes, and raccoons. Humans eat them for their legs. Fishes refrain from eating bullfrog tadpoles because they don’t taste good.

7. What Not to Feed Bullfrogs

A bullfrog will eat pretty much anything it can swallow, provided it’s not a plant or something that provides no nutrients. That being said, you should refrain from feeding your bullfrog human food or food that it would not encounter in the wild.

So the next time you see a bullfrog in its natural habitat, consider what it’s up to. It may well be that it’s out hunting—sitting patiently on its hind feet and waiting for a good fly or snake snack to fall victim to its quick, deadly tongue.

1. What do you feed a bullfrog?

A pet bullfrog can be fed flies, worms, and small lizards. If your pet bullfrogs are mainly carnivores, you can feed them small mammals.

2. Do bullfrogs have teeth?

Yes, bullfrogs have strong teeth. In fact, sometimes a bullfrog will drag its struggling prey underwater, especially when it’s got small mammals like a mouse. Its teeth can grip the prey well underwater, and usually, the prey dies from asphyxiation and the bullfrog eats it afterward.

Bullfrogs do bite, but not as a defensive measure; they bite to prevent their prey from getting away. Their saliva helps with disarming prey too. However, if you pick up a bullfrog and it does not like that you did so, you may get bitten, and such a bite can really hurt.