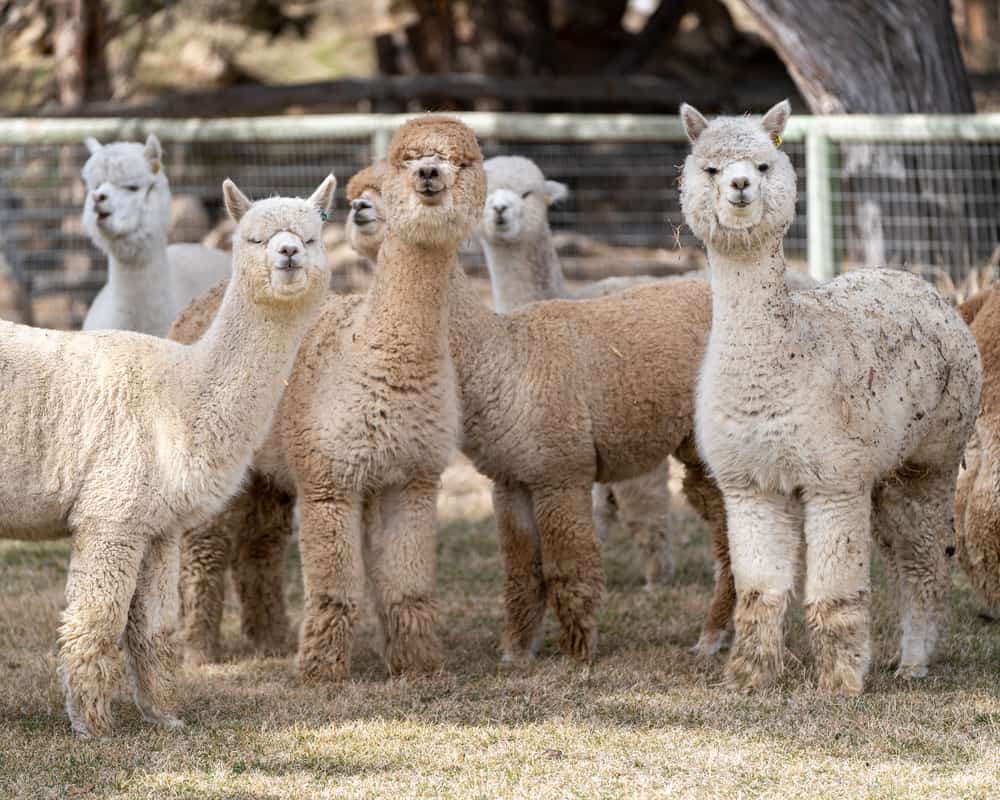 If you’ve ever seen an alpaca, you might have noticed how tall they are and the funny way they chew from side to side. If you have wondered what alpacas eat, this article is for you.

Today we’re diving into all things alpaca, including their characteristics, habitats, and eating habits.

The Physical Characteristics of Alpacas 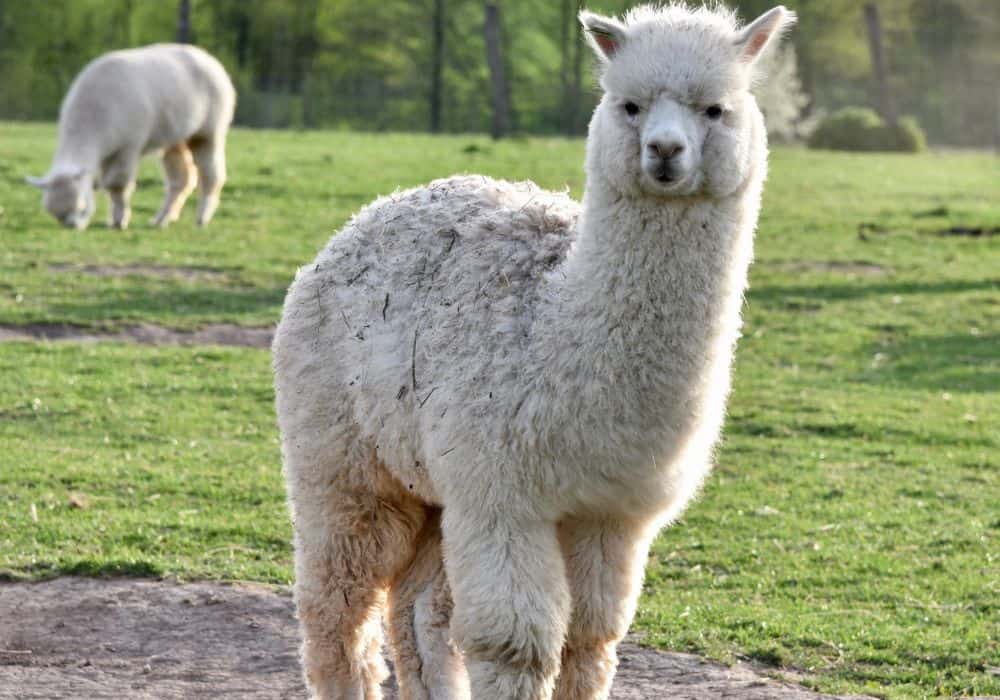 Alpacas are mammals that form part of the camelid family – the same family as llamas and camels. Often confused for llamas, alpacas are much smaller, weighing between 120 and 200 pounds. They come from their ancestor, the vicuña.

Alpacas are split into two breeds, huacaya and suri. Both are bred as livestock for their fleece, which is used for clothing and household items. Males are also called machos while females are called hembras, deriving from Spanish.

Huacayas and Suri alpacas differ mainly in their wool. Huacayas have curly, soft, and dense wool. They grow 6 inches of wool per year.

Suris, on the other hand, have cylindrical wool that resembles dreadlocks. Eighty-five percent of alpacas are huacayas. They grow about 12 inches of wool per year.

Alpacas are tall creatures with extended necks. They measure between 2.6 and 3.2 feet at their backs and extend up to 3.9-4.9 feet up to their heads. Males are larger than females.

These animals lack teeth on the top front of their mouths and have a dental pad there instead. This makes them seem like they have an underbite – especially when they chew.

Alpacas have padded feet and grow long toenails that are trimmed to ensure foot alignment. They are shed annually to cool down in summer and for their wool. They can be found in 22 colors, although tans, whites, blacks, and browns are the most common.

Compared to other livestock, alpacas are cleaner, smellless, and attract fewer flies.

Alpacas are known for their ability to spit when upset. This may happen when another alpaca or animal touches their food or if two males fight within a herd. They usually spit when their territory is being encroached upon, but this isn’t typical behavior between alpacas and humans.

These animals are very social and make humming sounds to communicate. They may also shriek if danger is present or if males are fighting.

To fight off predators like foxes, an alpaca will pursue the threat and then strike at it with its front feed. Castrated males are sometimes used as herd guards for herds of sheep or goats. 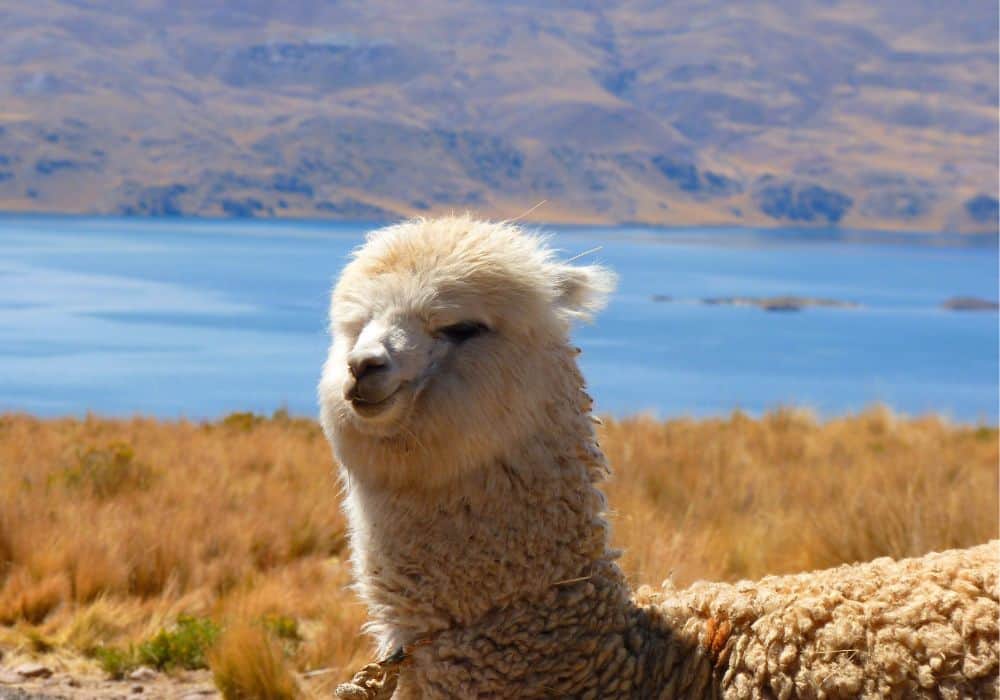 Alpacas have been domesticated for over 1000 years, leading them across the globe and to farmlands everywhere.

Alpacas originated in South America, but have since spread worldwide as domesticated livestock. The majority of alpacas today can still be found in Chile, Peru, and Bolivia.

Alpacas originally lived in high mountain foothills, but have since been raised to live on alpaca farms.

They prefer the humid and wet areas of the Altiplano range in South America. This area has very low levels of oxygen due to the altitude.

Alpacas breed annually at any time of the year. Females will be pregnant from 242 to 345 days and have a single offspring, called a cria. Both males and females are very protective of their crias.

All alpacas can live between 15 and 20 years. Unfortunately, those in the wool market are often killed when they’re 8-10 years old because their wool fiber begins to deteriorate. Those in the Andes also live less time due to the harsh environmental conditions.

What Do Alpacas Eat?

All alpacas are herbivores, exclusively eating plants. Domesticated alpacas on North American farms have distinct diets from those on South American mountains, due to climate, so commercial pellets are also incorporated into their diet.

Nowadays, there aren’t any truly wild alpacas. They have been domesticated and are found on farms. Nevertheless, wild alpacas would have eaten grasses, leaves, wood, stems, and bark – much of the same food that captive alpacas eat.

Alpacas enjoy orchard and timothy grass, as well as Bermuda and Bahia grasses.

A captive alpaca’s diet will depend on its environment. Most alpacas act as great lawnmowers, grazing the available grass.

These grasses may not have enough nutrients, so farmers will compensate by providing the alpacas with feed pellets, hay, grain, and loose minerals. Feed pellets created especially for alpacas include vitamins A and E, as well as selenium.

Pregnant or nursing alpacas should be fed forage-based supplements and rich grass or hay like alfalfa.

Loose minerals can be purchased and set out in a sheltered area for the alpacas. These should be left out and accessible year-round.

Farmers can also give their alpacas the occasional treat, like vegetables or fruit. Treats should be cut into smaller pieces so that the alpacas don’t choke. They can include shredded carrots, apples, broccoli, lettuce, watermelon, bananas, and berries. Shredded beets also make a great snack high in fiber, but make sure the beet is wet.

Once the baby is weaned off of the milk at around six months old, they will begin to eat grass, leaves, and bark like the adults.

How Much do Alpacas Eat? 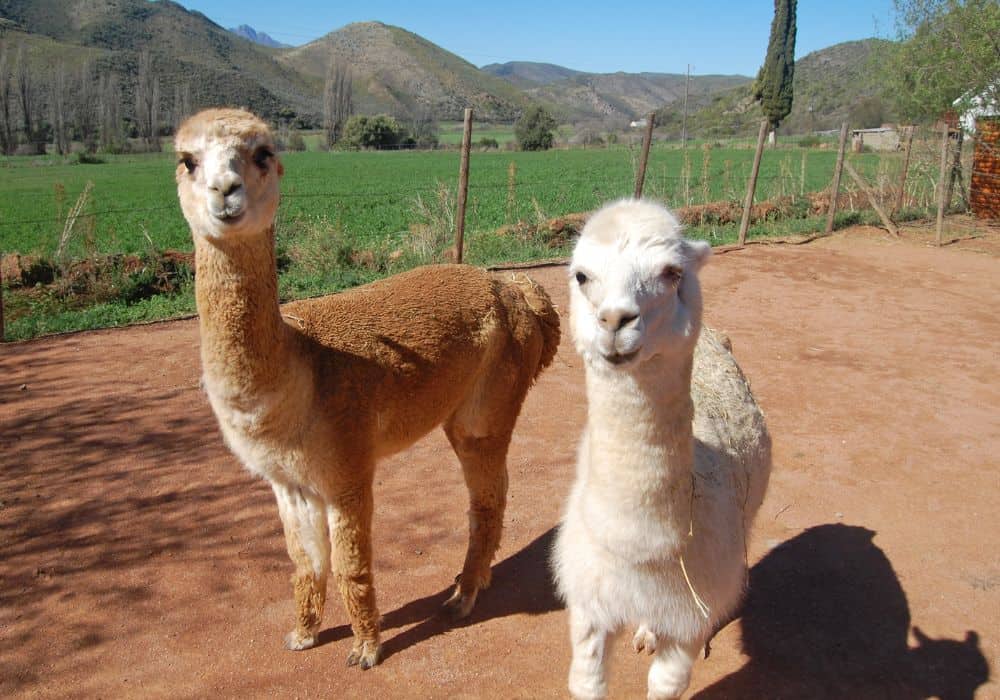 Alpacas are unique creatures in that they eat very little for their size. They eat about 1.5% of their body weight daily, which equals about two pounds of food for a 125-pound alpaca.

Adult alpacas need to combine their food with around four liters of water per day for optimal health.

A cria, on the other hand, requires 10-15% of its body weight daily in milk given over several feedings. This helps the cria grow. Over time, it will require a smaller percentage of food compared to its weight.

What Not to Feed Alpacas

Alpacas can react negatively to the toxicity of perennial ryegrass, annual ryegrass, or Phalaris grasses. Be sure their pasture also doesn’t have any toxic bushes or shrubs they may accidentally munch on.

Certain treats can be toxic to alpacas, including avocados, tomatoes, eggplant, cherries, kale, potatoes, and nightshade. Meat products and human junk food should also be kept away from alpacas.

Always check your alpacas’ feed for ingredients such as ionophores (Salinomyin, Lasolosid, or Rumensin). These can cause death in alpacas. Try to purchase feed that is made at an ionophore-free facility. 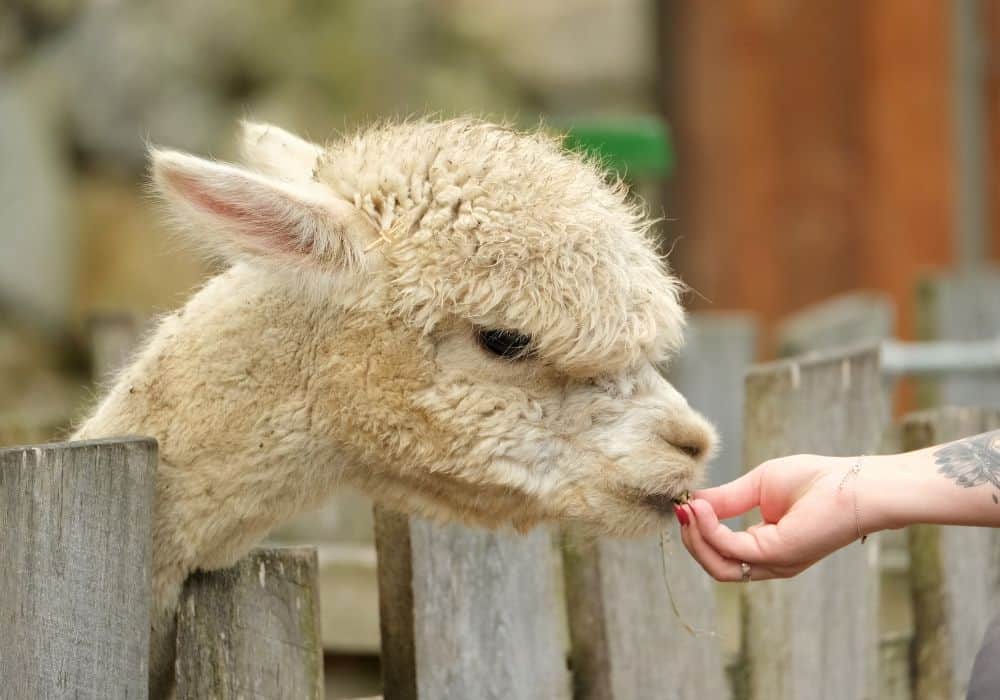 The alpaca’s special stomach allows it to efficiently extract the nourishment it needs from small quantities of food. This stomach is composed of three parts.

The alpaca tears the plant fibers from the source and swallows them whole. In one compartment of the stomach, this is turned into a cud. Cud is partly-digested food that returns to the mouth for more chewing.

The cud comes back up into the mouth, the alpaca chews it with its molars, then swallows the food again to finish its digestion.

Alpacas are friendly, domesticated creatures that provide wool for people around the world.

Their diet is fairly simple, as they stick to grasses and hay for the most part; however, farmers will also add in special fruits and veggies as treats, as well as loose minerals and pellets to ensure adequate nutrition.

Alpaca babies, or crias, will depend on their mother’s milk. Nursing mothers may benefit from supplements and richer grasses like alfalfa.

What Is an Alpaca’s Favorite Food?

Alpacas love to eat grass, especially orchard, timothy, Bermuda, and Bahia grasses. They will also snack on certain fruits and vegetables as a treat. Farmers will feed alpacas hay, pellets, and loose minerals.

For the most part, alpacas have a calm temperament, making them good pets to have on the pasture. They are smart animals that can be trained easily, and some are even used to guard herds of sheep or goats from predators.

Alpacas can show aggression if you try to take away their food or if two males don’t get along, but this aggression is not usually geared towards humans.

How Do Alpacas Show Affection?

Alpacas can show affection by bringing their nose near your face and nuzzling you. They are social animals that need to stay in a herd. They can even recognize herd members that they haven’t seen in years.