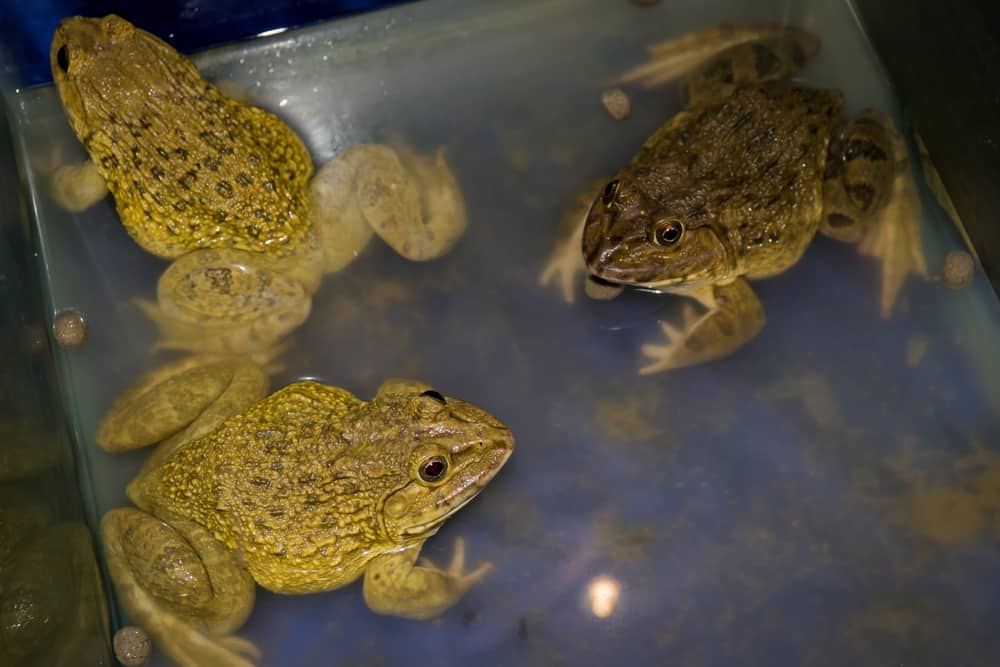 Frogs play the role of both predator and prey in the ecosystem. While there are plenty of creatures it feasts on, many predators enjoy feasting on frogs instead. Read on to find out what animals eat frogs and how frogs defend themselves from these predators!

Where Do Frogs Live? 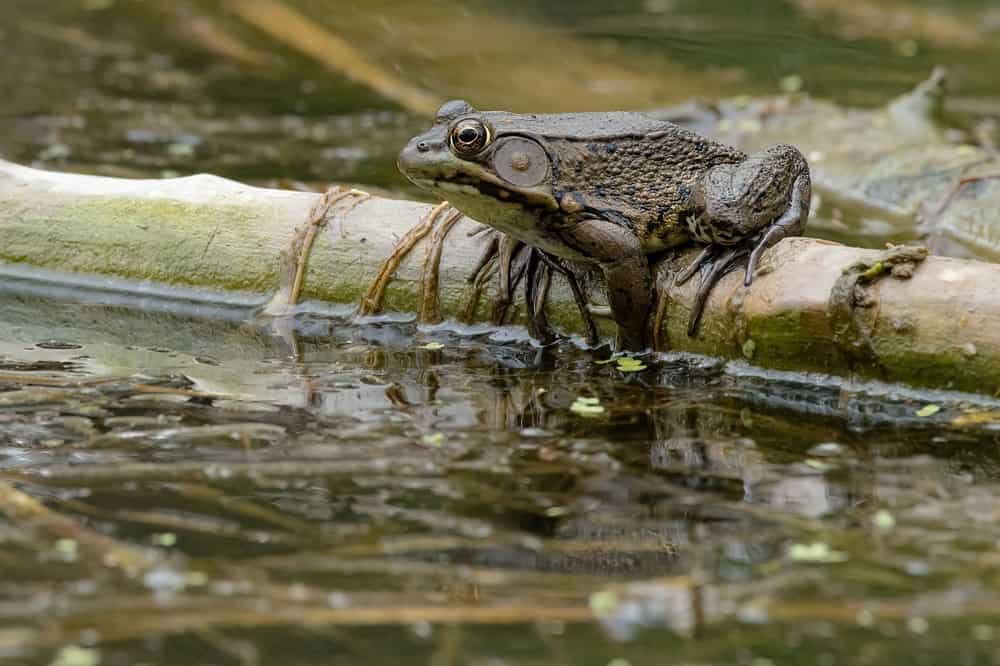 Frogs can use their nostrils for breathing pretty much the same way humans do. But they can also absorb the dissolved oxygen in its surrounding via their moist skin.

Frogs have mucous glands to keep their skin slippery and moist. However, they also need fresh water to ensure that their skin never gets too dry.

Consequently, frogs can be typically found nearby the freshwater and swampy areas. Surprisingly, these animals have also evolved to adapt themselves to the desert. A few desert frog species exist that rely on minimal water to survive.

Likewise, arboreal tree frog species have made trees their home. However, they do still need water to survive and can be found hopping around freshwater bodies. These species have sticky pads on their feet for climbing purposes.

Are Frogs Predators or Prey?

While tadpoles are often herbivores, frogs in adult stages are strictly carnivores. Adult frogs are often secondary or tertiary consumers in the majority of food chains. These creatures feed on small insects, crickets, grasshoppers, snails, worms, slugs, and many other invertebrates.

That being said, many predators bigger in size and strength hunt frogs in pond biome food chains. Therefore, although these amphibians enjoy hunting, they are quite low on the food chain. Below we’ll discuss a few notorious predators in the animal kingdom that enjoy dining on frogs. 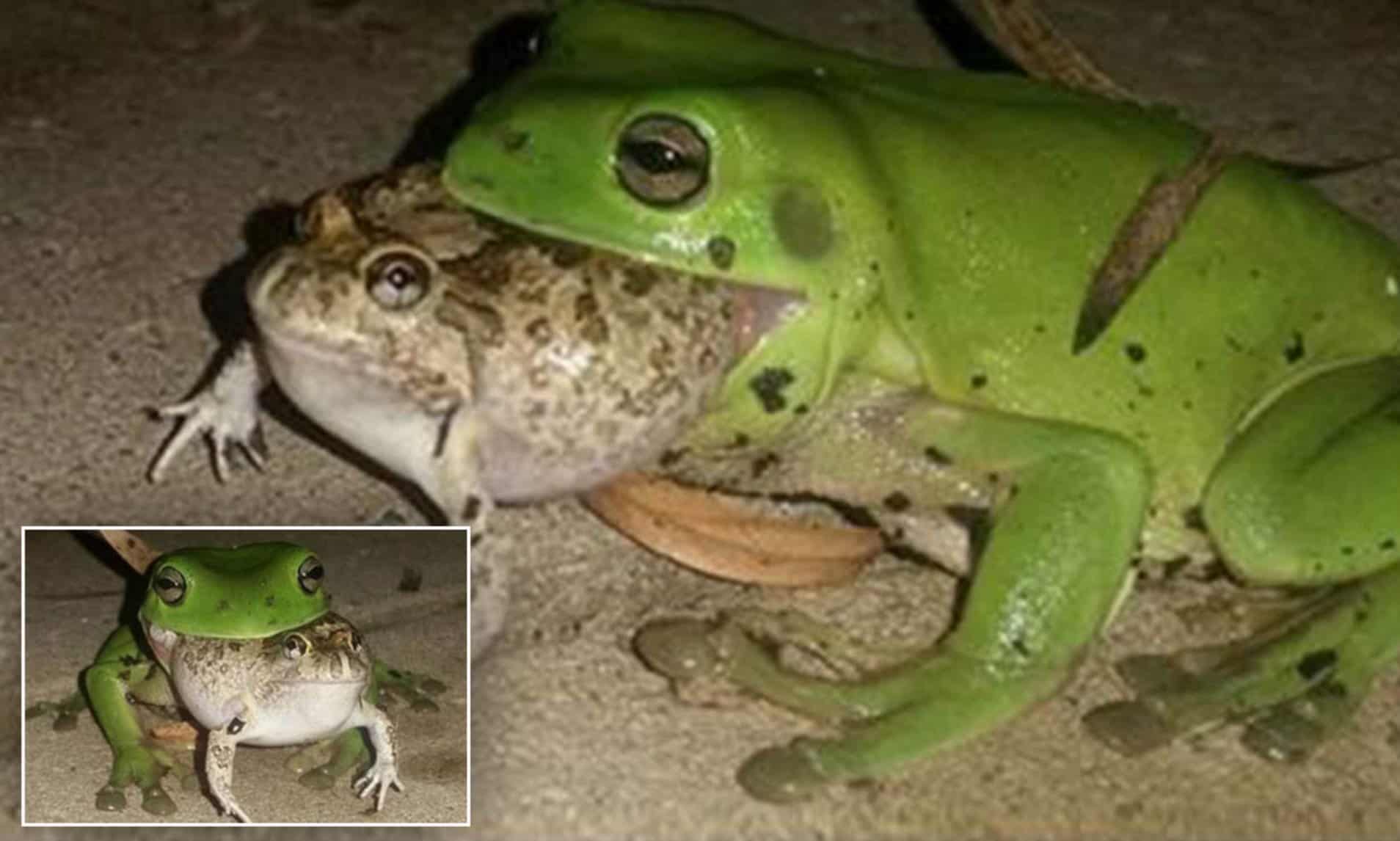 It might be hard for you to believe, but yes, some species of frogs are cannibalistic. In fact, frogs eating frogs isn’t uncommon at all. A study has suggested that frogs are more likely to engulf their relatives when they’re in their non-native habitat.

Moreover, big frogs are found to be more cannibalistic in nature. In fact, the more the body size of a frog increases, the more the chances that they’ll feed on their own kind.

The Cane toad, Cape platanna, and Blacksmith tree frog are some of the many frogs in which cannibalism has been witnessed. 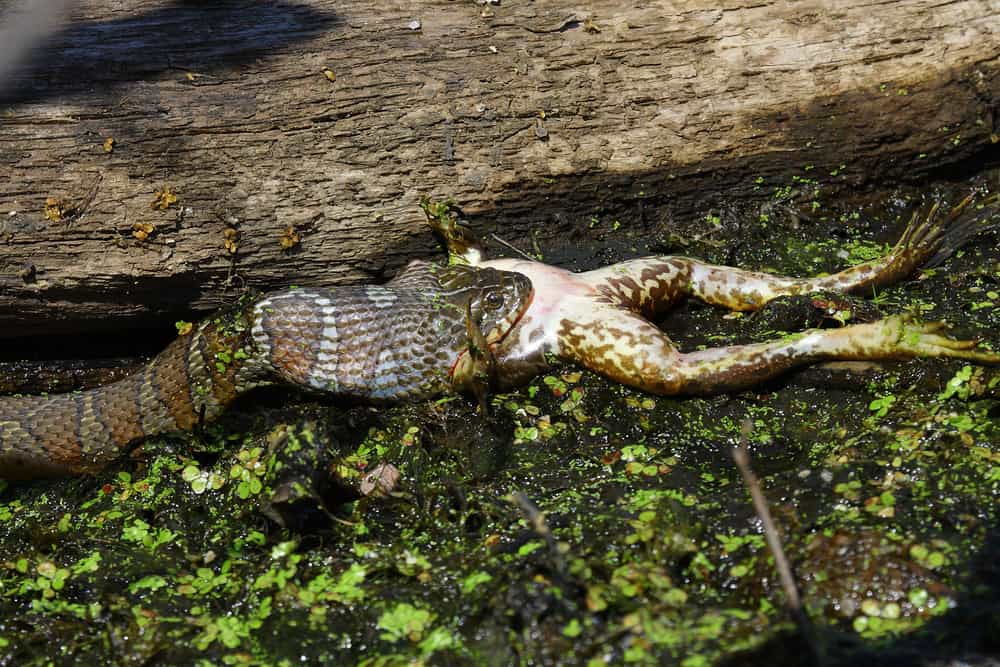 Yes, the majority of the snake species do enjoy frogs. Pool frogs, leopard frogs, common frogs, and bullfrogs are some of the frog species that snakes relish.

Garter snakes and Asian Keelback snakes are some snake species that feast on frogs. Although the snake’s mouth looks smaller than a frog’s body, snakes can open their jaws impressively and can swallow the amphibian whole.

Some snake species are much more brutal. They puncture their prey frog’s stomach and gorge on the internal organs while the frog is still alive.

More than 3,000 snake species are extant today, and the majority of them feed frogs. That being said, some snakes also fall prey to frogs. 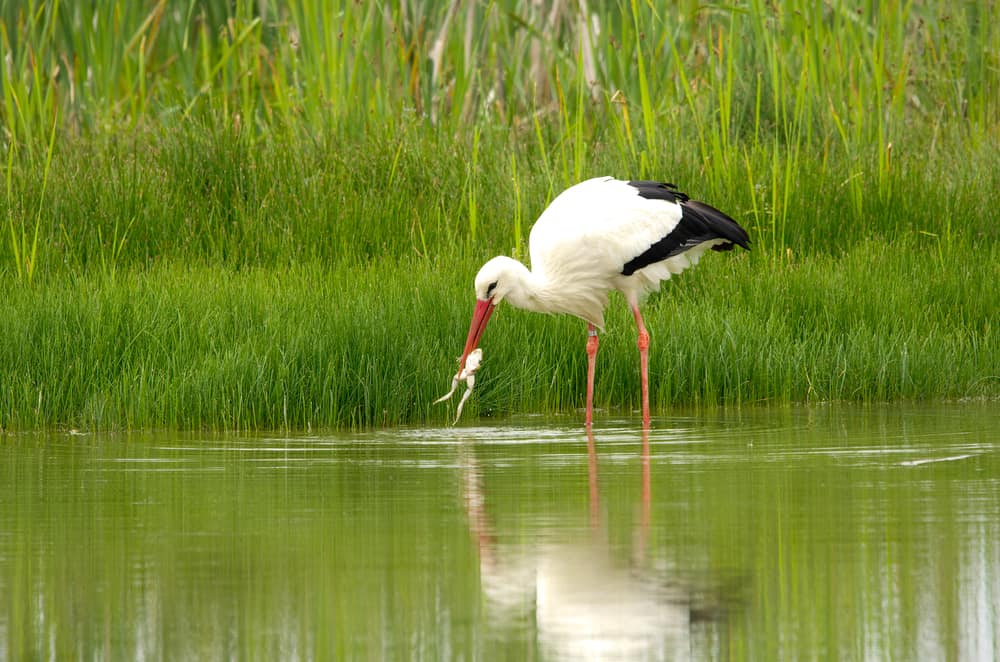 Moreover, tidy and innocent-looking swans and ducks also eat frogs. The majority of meta-loving bird species feed on anything readily available to them. If frogs happen to share the habitat as theirs, these birds will strike the amphibians as soon as an opportunity arises.

Wading birds and fishing birds are the most common bird predators of frogs. Aposematic frogs displaying bright black, blue, red, and yellow color on their body, warning of the potential danger are often avoided by these predator birds.

Interestingly, Australian crows have figured out a way to relish poisonous cane toads without being poisoned. These clever crows catch the toads by limb or above the eye. They then feed on the delicious body parts of these amphibians without contacting the part from which the poison oozes. 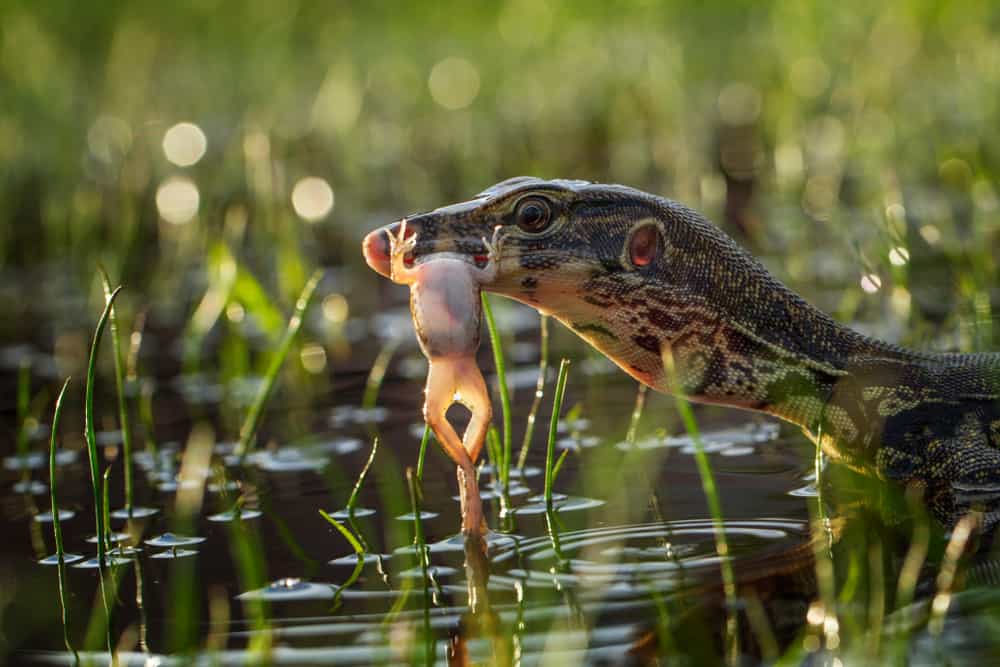 While big frogs feast on smaller lizards, big lizards also grab any opportunity to feed on these small amphibians. That being said, it isn’t that easy for lizards to get past the prey frog’s defense mechanisms. Therefore, smaller and non-toxic frog species are the major targets of lizards. 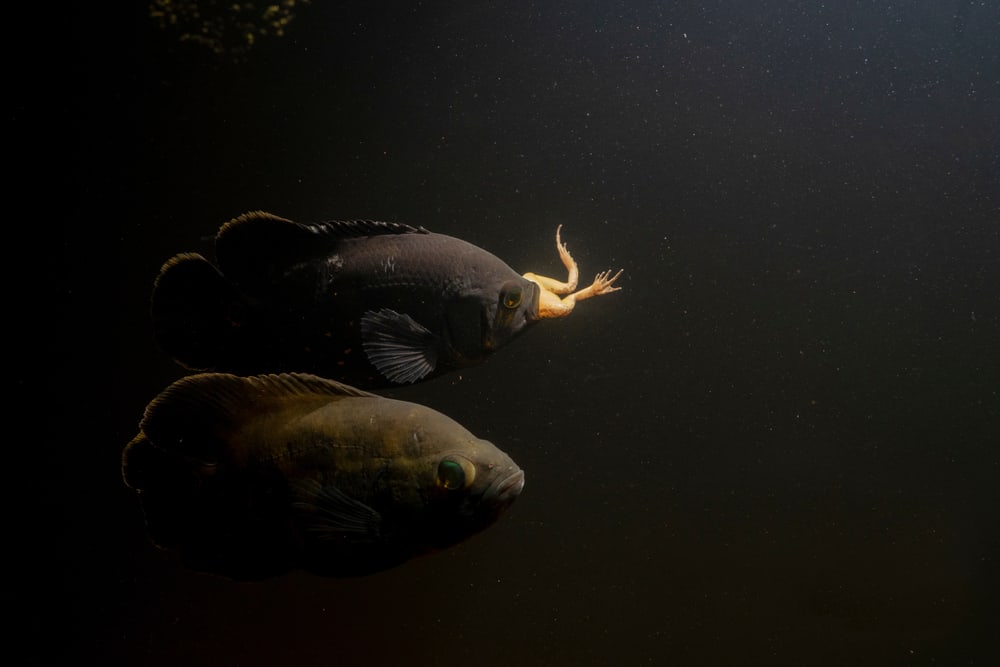 Generally, it is common for frogs to hunt small fishes. Likewise, tadpoles also feed on decaying fishes and feast on fish eggs.

But, did you know that some fish species also enjoy eating frogs? Northern pike, snook, redfish, walleye, muskellunge, catfish, bass, and many other big fishes enjoy a good frog-based diet. Many anglers often use frogs as bait to lure big fishes. 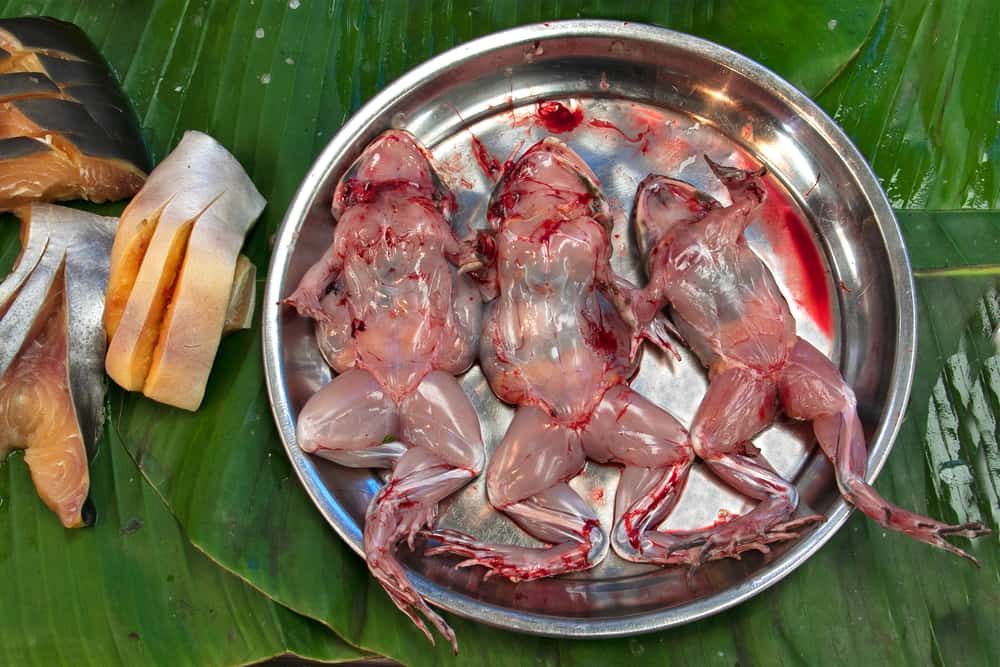 The majority of small and large mammals are known to feed on frogs. And, yes, that includes humans too! Many cultures worldwide, including Indonesian, Chinese, Vietnam, and French cuisine, offer frogs’ legs as delicacies.

Cats and dogs also strike every opportunity they get to relish some good frog meat. Foxes, raccoons, and coyotes also eat any frog that comes their way.

Monkeys, opossums, stoats, weasels, badgers, and mink are also some meat-loving mammals that enjoy eating frogs. Aquatic and semi-aquatic mammals such as otters are also fond of frogs. 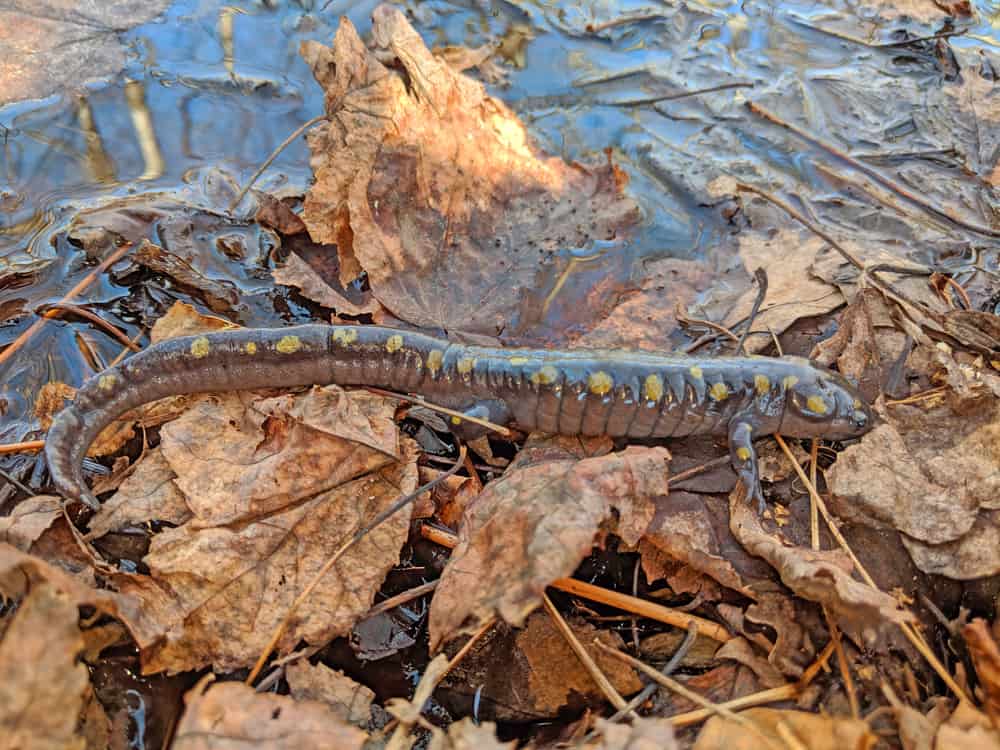 Did you know that salamanders are more closely related to frogs than they are to lizards? Lizards are reptiles, and salamanders are amphibians. Nevertheless, besides their body type, they do have one more shared interest – enjoying a good frog hunt.

From insects, worms, and many smaller invertebrates to striking their own amphibian relative, salamanders are indeed extremely carnivorous. 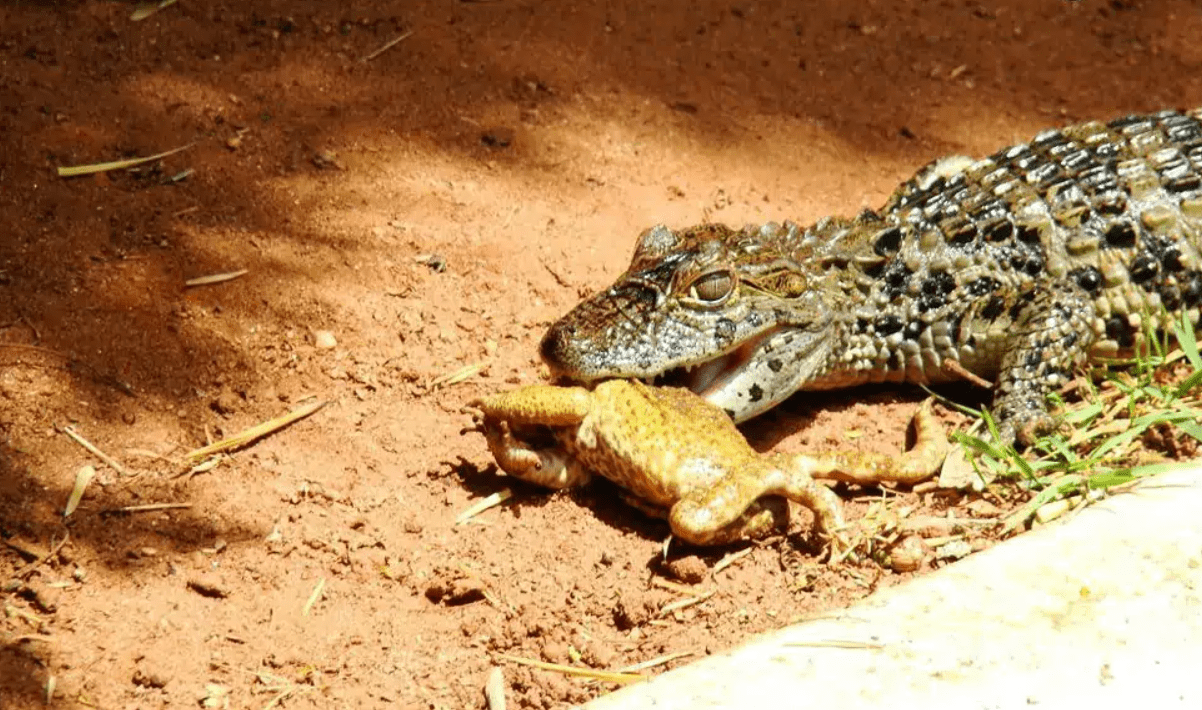 If frogs are readily available in abundance, alligators, especially juvenile ones, will happily eat them. Adult alligators, on the other hand, target a bit bigger mammals, fishes, and turtles.

Nevertheless, in a habitat where frogs are easy catches, alligators might still favor eating frogs. In fact, these carnivores strike upon almost every flesh readily available to them. Alligators use their sharp teeth and strong jaws to kill and devour their prey.

How Do Frogs Defend Themselves From Predators? 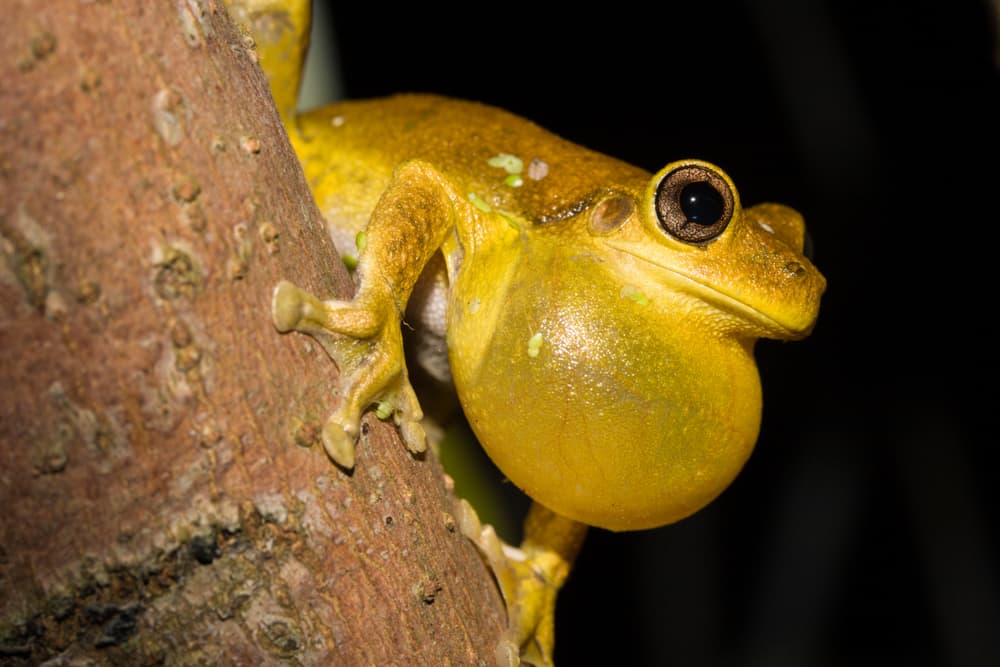 Frogs have evolved a few defense mechanisms for survival. One of the most common tactics many preys follow to scare off predators is to appear and sound large and intimidating.

Similarly, frogs also follow this strategy for survival. They puff up their body to appear much larger such that they can intimidate and scare off their predators.

Once these amphibians close their mouth and nostrils, air travels from the lungs to vocal sacs via vocal cords. The sac interestingly inflates like a balloon. What’s more, frogs also use their vocal sacs to create big intimidating sounds.

Likewise, frogs are also great at tricking their predators by camouflaging. Normally, they blend in which the background. But some poisonous species also display bright colors to confuse and warn their predators that they’re highly toxic.

Moreover, frogs also have colored spots on their skin that they enlarge whenever a predator approaches nearby. Predators take these spots for the amphibian’s eyes and get threatened and pull away.

Urinating or defecating when threatened or scared is also one of the oldest tricks many animals have up their sleeve. Frogs urinate when they’re scared or uncomfortable, which fends off predators. Urinating makes predators drop the frog, and they can quickly escape away from this way.

If you hold a frog and it feels threatened, it might also urinate on your hand. While frog’s urine isn’t labeled to be toxic to predators, the smell is very off-putting. Wash your hands properly for a minute with soap and water to get rid of the smell.

Some species of frogs also have skin glands to secrete poison which can cause a range of health issues to the predator, including paralysis and death. This forces the predator to spit the frog out.

Why Are Frogs a Great Food Source? 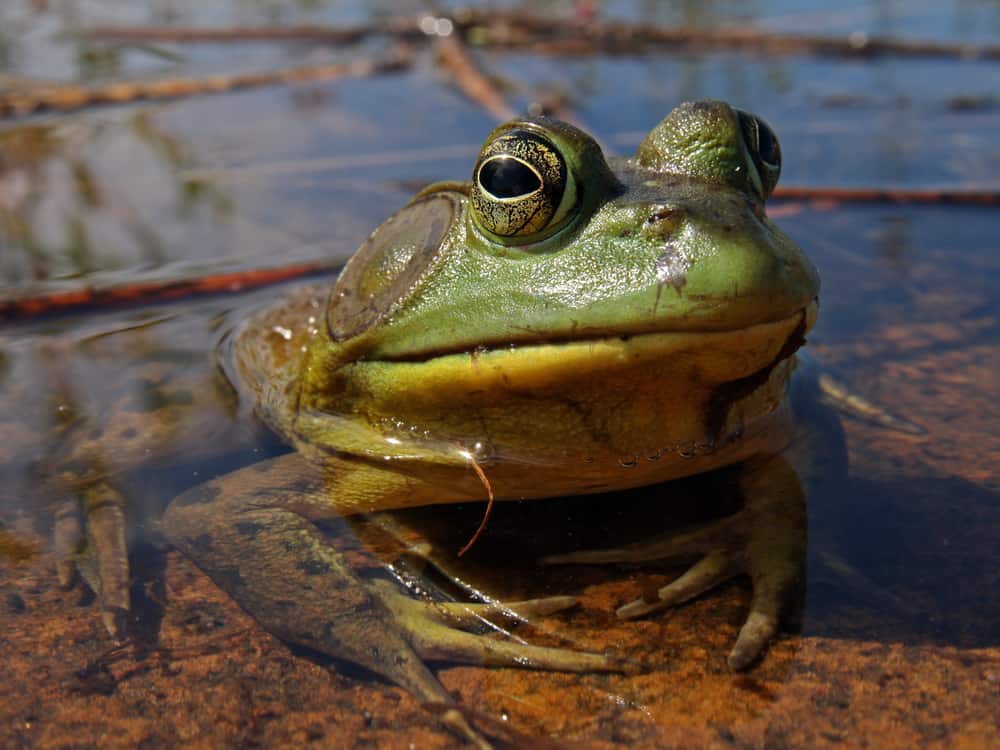 Frogs are a great source of protein, omega-3 fatty acids, vitamins, manganese, copper, and phosphorous. In fact, frog meat is highly digestible and is valued for its medicinal property in many human cultures worldwide. It is also labeled as the ‘other other white meat’.

Frog feet are commercially sold as a weight loss diet and are speculated to cure multiple human health issues.

Moreover, frogs are also relatively abundant in the ecosystem. Therefore, predators have easy access to these amphibians. This might also be one of the reasons why frogs are hunted by so many predators.

You were surely surprised to know about the cannibalistic nature of frogs, weren’t you? Well, we were too!

What’s more, the defense mechanisms these small amphibians have developed for survival are truly impeccable, aren’t they?

Let us know if you have any more queries related to animals predating frogs. Feel free to leave a comment down below. We’d love to interact with you!