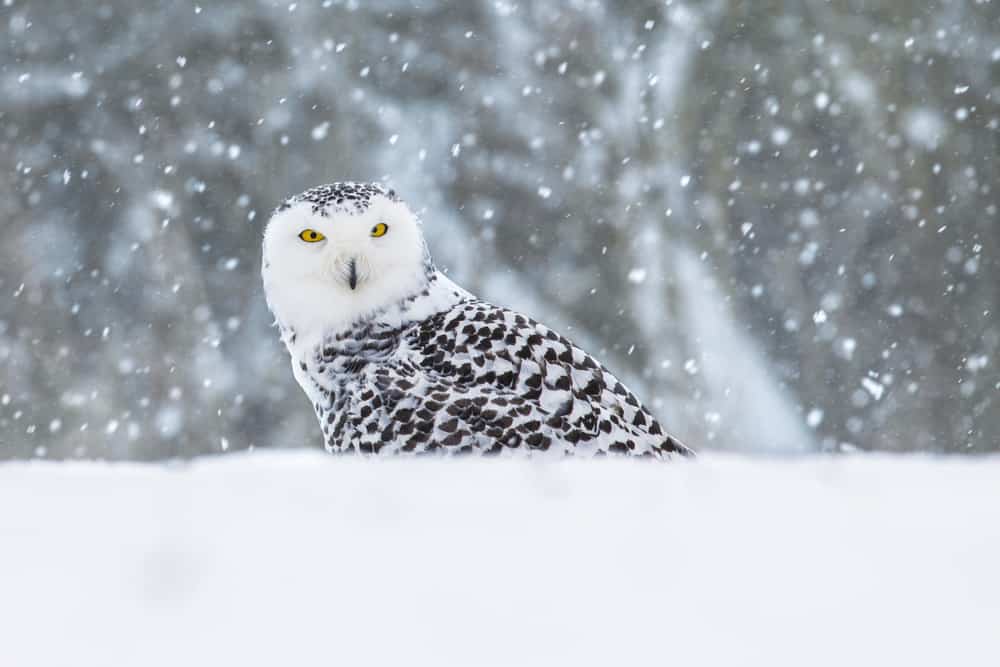 The snowy owl is one of the most iconic birds of prey on the planet, due to their importance in both popular culture and historical symbolism. These large birds are more than just savvy predators; they mean a lot to certain cultures worldwide.

In this article, we will explore the symbolism surrounding snowy owls by deep diving into what different cultures think about them, while also looking at their key characteristics. 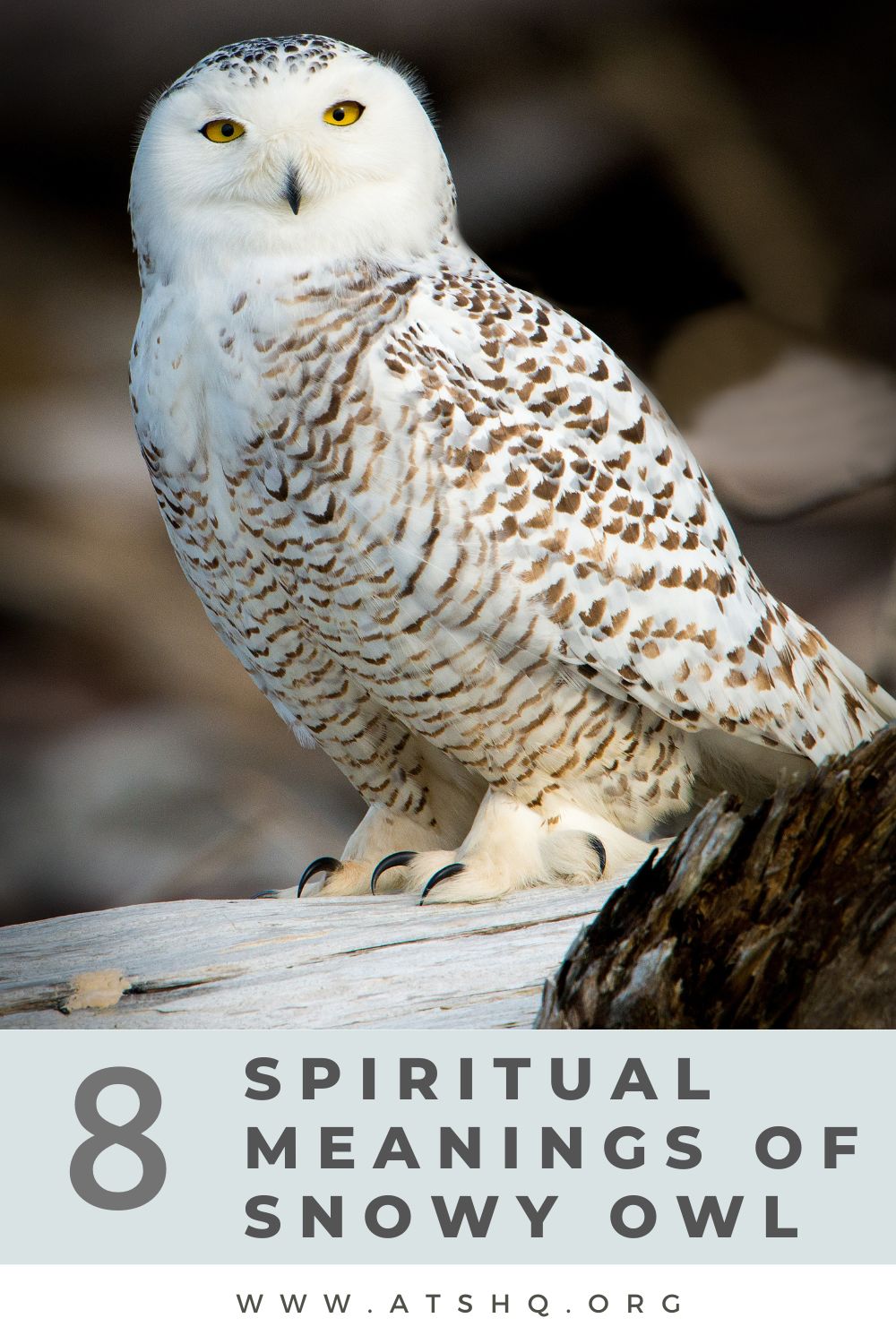 Snowy owls have plenty of fascinating and unique characteristics which make them the birds that they are. Without these characteristics, the symbolism we will look at shortly wouldn’t make much sense.

The first thing worth pointing out about snowy owls is their feathers. Males have almost completely white feathers which help them to stay camouflaged in wintery conditions, while females have brown markings on their white base. These feathers are heavier than the feathers on most birds, particularly on their legs and feet. This is to aid with insulation in their naturally ice-cold habitat.

As you could probably have guessed, snowy owls like snowy conditions. As a result, they tend to stick to the arctic regions in North America and Eurasia during the winter months and then migrate to the Arctic Circle and the North Pole in the summer.

Unlike other birds of prey, snowy owls don’t like cluttered forests packed with trees and instead live in open, treeless fields known as tundra. Tundras are located in arctic regions of North America, Europe and Asia and the soil is almost permanently frozen over, making it a perfect habitat for snowy owls all year round if they don’t want to migrate.

One downside to these tundras is the lack of prey available which has contributed to snowy owls becoming an endangered species. Their primary food source is lemmings and other small rodents, but lemming numbers have been decreasing in recent years. Snowy owls must eat the equivalent of around 10 mice a day to stay healthy, meaning when rodent supply is short, they go for larger mammals such as hares and rats.

When it comes to hunting these small rodents, snowy owls differ from other owls in the sense that they hunt in daylight. While many owls are nocturnal, snowy owls are diurnal. They will perch themselves on the ground or on small posts and fences and wait for their prey to show themselves from under the snow.

They have keen eyesight, fantastic hearing and bristles on their beak which allow them to sense nearby objects through movement. Once they have spotted a lemming or any other rodent that they fancy, they will swoop quickly low to the ground and snatch it up with their sharp talons before eating it whole.

The majority of snowy owls hunt alone and live in isolation. The only exception to this is during mating season, whereby a male and a female will come together to reproduce. Snowy owls are very loyal and will mate with the same partner for their entire life, or until one of them dies. The average lifespan of a snowy owl in the wild is ten years. 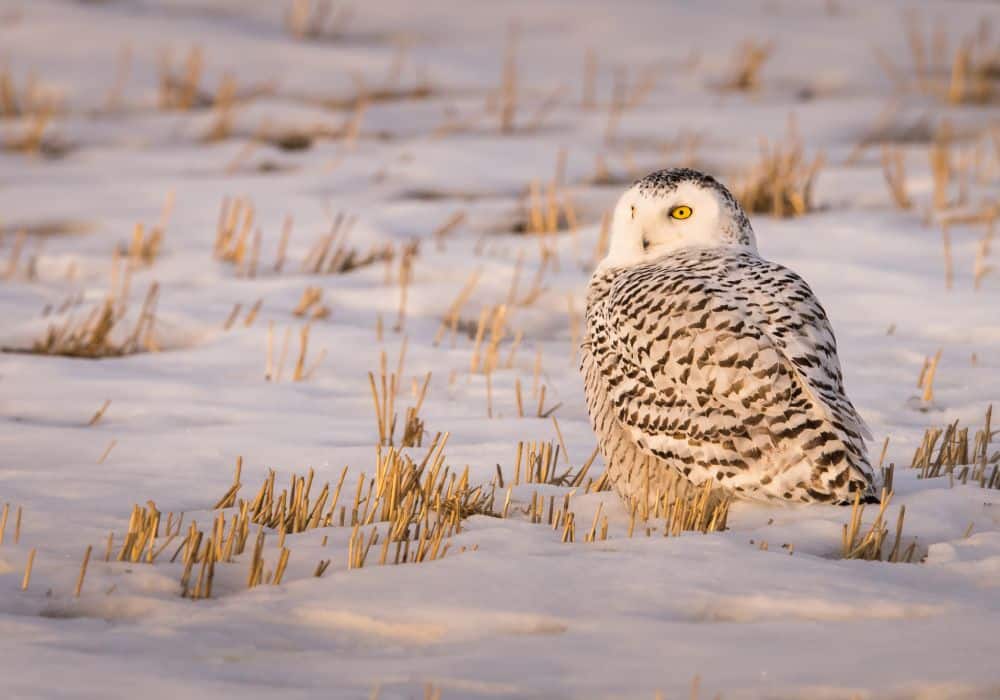 Now that we have established the key snowy owl characteristics, it’s time to look at how these characteristics have been interpreted symbolically and spiritually across the world and throughout time.

While certain cultures and countries have their own unique spin on snowy owls, there are some general themes throughout the world when it comes to the symbolism of these creatures. They are often seen as:

In Scottish and Irish mythology, snowy owls are associated with a witch called Beira who is known as the Queen of Winter. Beira is a one-eyed giantess who can shapeshift into different animals and creatures.

One creature that she is said to have commonly transformed into is a snowy owl where she was responsible for forming snowy mountains and making the temperatures in ancient cultures snowy and cold.

As a result, in Scottish and Irish (Celtic) cultures, the snowy owl is actually related to wizards, witchcraft, and magic. More generally speaking, though, the color white is seen as sacred in Celtic cultures meaning it isn’t all bad for the snowy owl in this culture.

The welsh symbolism of snowy owls differs from that of Scottish and Irish cultures, despite them all being part of the wider Celtic culture.

A tale in Welsh mythology relating to snowy owls comes in the story of Blodeuedd. Blodeuedd is married to a hero called Lleu Llaw Gyffes and she was created out of flowers and brought to life through magic by Lleu’s uncle, Gwydion.

After some time, Blodeuedd began an affair with another man who she wanted to be with and devised a plan to kill Lleu so she could be with her new lover. Lleu was almost immortal but Blodeuedd found a way to kill him.

Upon finding out about her treachery, Gwydion punished Blodeuedd by condemning her to a life as a snowy owl. As a result of this transformation, the Welsh don’t look at snowy owls fondly, but rather as symbols of bad luck and beings that you wouldn’t want to be. 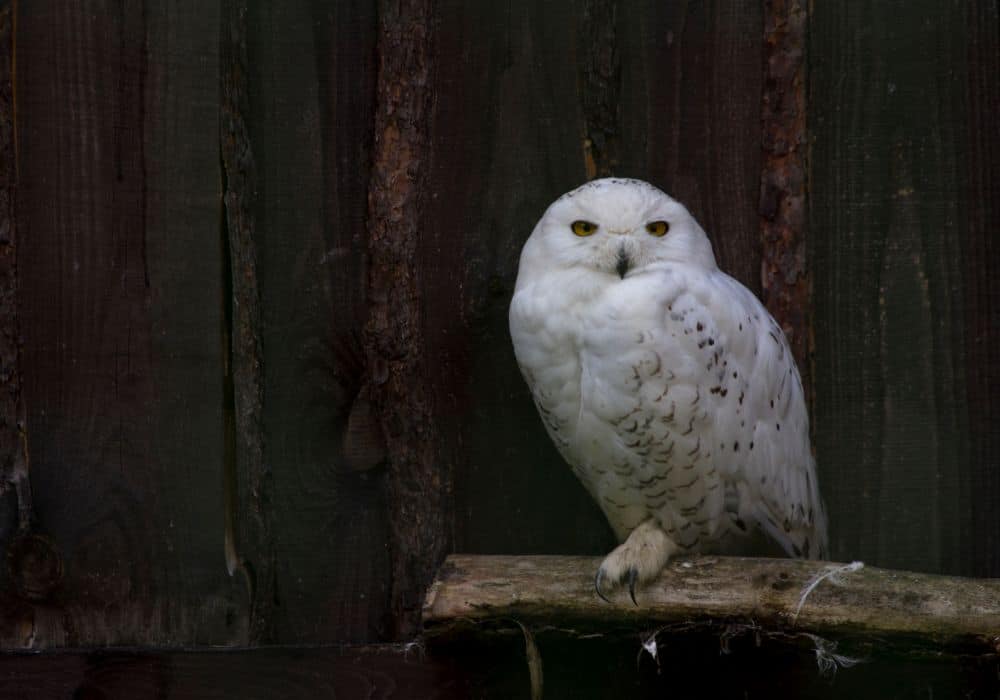 In Japan, snowy owls (and owls in general) are associated with good fortune. This can be seen through the Japanese word for owl ‘fukuro’ which derives from the word ‘fuku’ which means luck in Japanese. Therefore, if you see a snowy owl while in Asia you should consider yourself very lucky and expect other good fortunes to come your way.

In ancient Japanese folklore, the native Ainu people saw owls in general as sacred animals that represented a God. This God was said to govern human behavior meaning some people in Japan believe that owls have the power to judge you like a God.

Native American symbolism of snowy owls is all to do with the afterlife. Native Americans believe that white snowy owls, and other species of owls, are messengers of the dead. As a result, in Native American cultures, the sighting of a snowy owl can give great peace to those mourning the loss of a loved one as they see it as them coming back to comfort them.

A few Native American tribes, however, look at this idea more negatively and instead look at snowy owls as the restless spirits of the dead. This brings the opposite of comfort to those in mourning.

Greek mythology is full of stories relating to birds of prey and owl are no different. Snowy owls are associated with Athena – the Goddess of War. It is said in Greek mythology that the sighting of snowy owls, or any type of owls for that matter, are seen on the battlefield then Athena is bringing you luck and victory is on the way.

In the Bible, the color white, in general, is associated with purity, honesty, cleanliness and innocence, meaning white animals such as doves and snowy owls are seen in a positive light.

Owls are also seen positively by Christians, with them being seen as symbols of wisdom. When you combine this with the purity associated with the color white, you will see those snowy owls are actually some of the purest creatures for those who follow the Bible’s teachings.

The symbolism of snowy owls in Indian cultures is different from that of every other owl. For most owls, Indian cultures associate them with evil and negativity. However, for snowy white owls, more positive characteristics are associated such as good luck and wealth.

A lot of this stems from the purity and honesty associated with the color white, but also from the Hindu Goddess of Wealth, Lakshmi, who is sometimes depicted on top of a snowy owl.

How To Interpret A Snowy Owl Encounter? 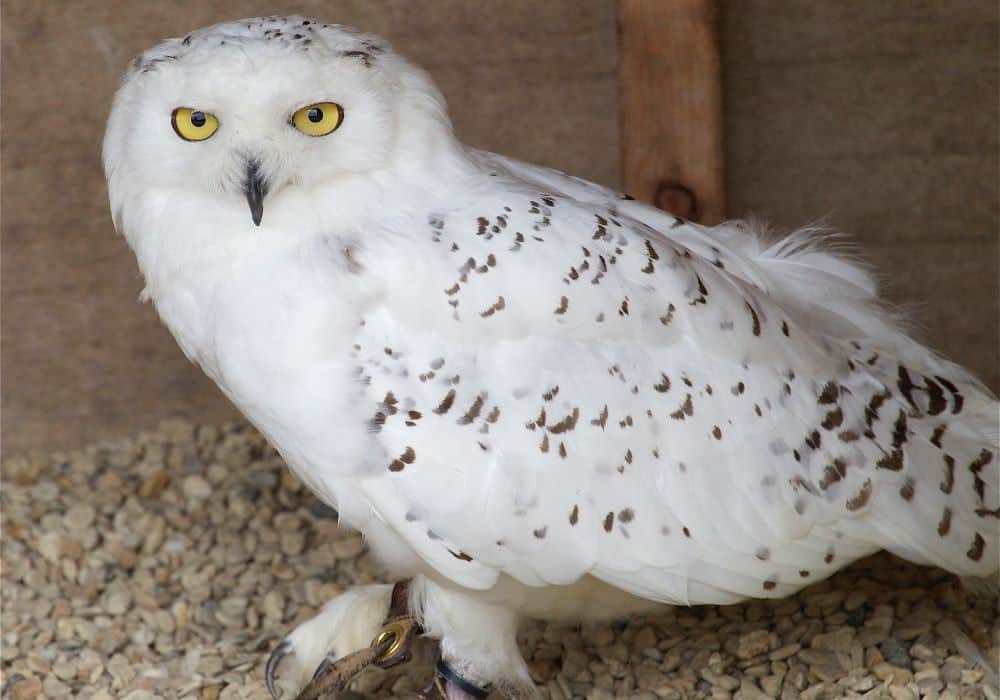 Now that we know how snowy owls are symbolised generally and across different cultures and countries, I’m sure you are beginning to look at these creatures in a different light. With this in mind, you should now take note of the following should you ever encounter one of these magnificent birds in the future.

The first thing you should consider if you encounter a snowy owl is the possibility that its spirit is that of a deceased loved one. They may be appearing to you to offer you comfort or to provide you with a reminder of the values the said loved one instilled in you while they were alive. Perhaps you’ve lost your way a little bit in regards to these values but a snowy owl sighting should serve as a reminder to get back on track.

Another thing that you should consider if you encounter a snowy owl is that good fortune could be on the way. These birds are endangered species and are therefore considered rare to come across. Take any sighting of them as special and look forward to the fortune heading your way.

One thing worth mentioning is that these encounters don’t have to physically happen for you to take symbolic meaning from them. If a snowy owl appears in your dreams then you should also consider what it means.

Finally, as we’ve mentioned, these birds are endangered species. If you do encounter one in the physical world, don’t do anything to disturb or harm them.

Snowy Owl As A Spirit Animal

If you have a snowy owl spirit animal then you are going to share similar personality traits to a typical snowy owl. This means you are more than likely an introverted person that likes to stay hidden away from large groups and personalities.

However, that doesn’t mean to say that you are shy. You will love adventure and be decisive when it comes to key moments in your life.

Snowy Owl As A Power Animal 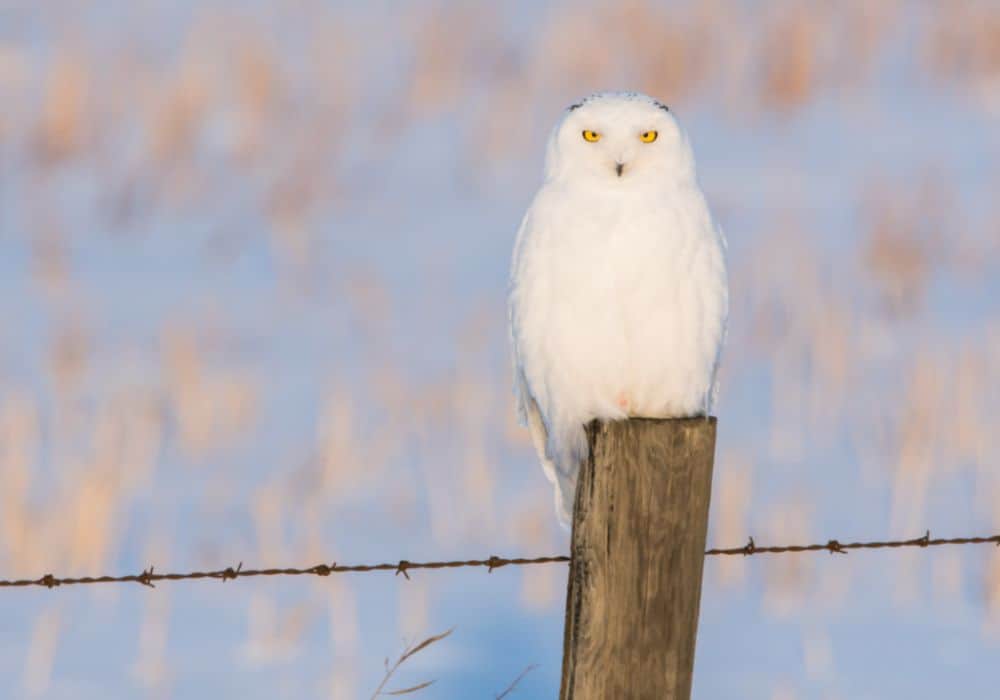 Snowy owl power animals tend to be good at picking people up when relentless boredom sets in. They will present themselves to you and inspire you to take a new adventure, giving you the willpower to step away from your usual routines.

Snowy Owl As A Totem Animal

If you have a snowy owl totem animal then you will likely be someone who places huge value on honesty and the truth. If someone breaks your trust then you will cut them out of your life without a second thought.

Due to this, those with this totem animal are more likely to have one small, close-knit group of friends rather than a large sphere of friends from various groups.

The final thing that we would like to talk about is how the snowy owl is represented in modern popular culture. In one of the biggest film franchises ever made, Harry Potter and the wizarding world, one of the main character’s closest allies is a snowy owl called Hedwig.

Throughout the films, Hedwig is shown to symbolize a few different things. First and foremost, he is seen as a great messenger often deployed by Harry to get messages out to key people in his life.

Secondly, Hedwig is shown to symbolize love and loyalty. He is fiercely loving and loyal to Harry throughout his life, and his death ultimately comes as a result of him putting his own body on the line to save Harry from death.

Due to the popularity of these films, it is fair to say that snowy owls in general now share these symbolic themes.

To conclude, snowy owls have significant symbolic and spiritual meaning to various different groups, countries, and cultures. Now that you have a greater understanding of the symbolism surrounding these magnificent birds, you should figure out just what they mean to you.