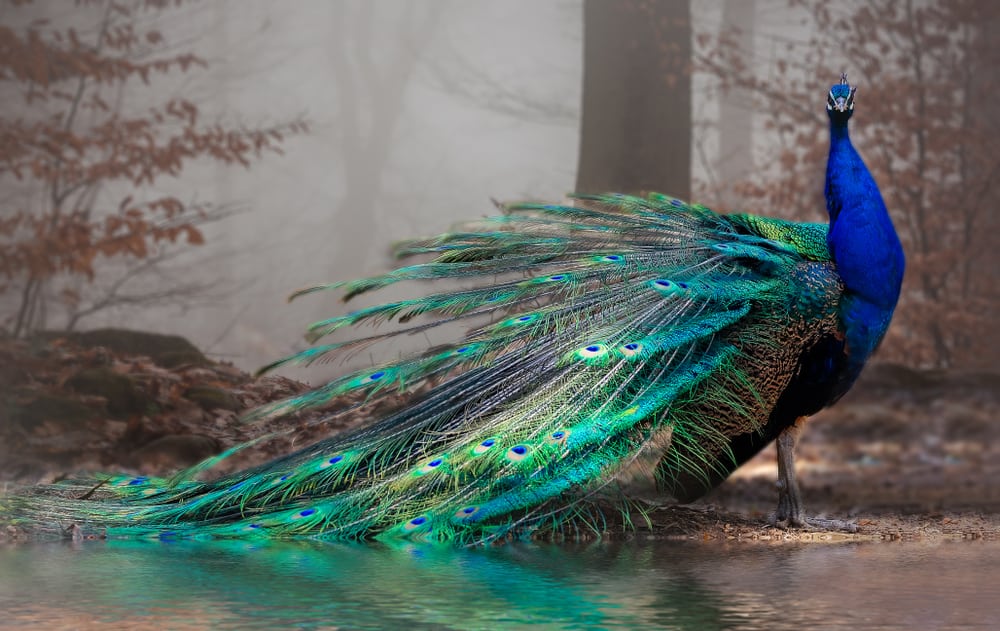 If you have ever encountered a peacock then you will certainly have remembered it. Their vibrant feathers make them one of the most unique birds on the planet but there is so much more to them than just their striking colors.

Peacocks are, symbolically and spiritually, very important to many different cultures around the world. Today, we are going to be examining just exactly what they mean to these cultures and where these thoughts stem from. 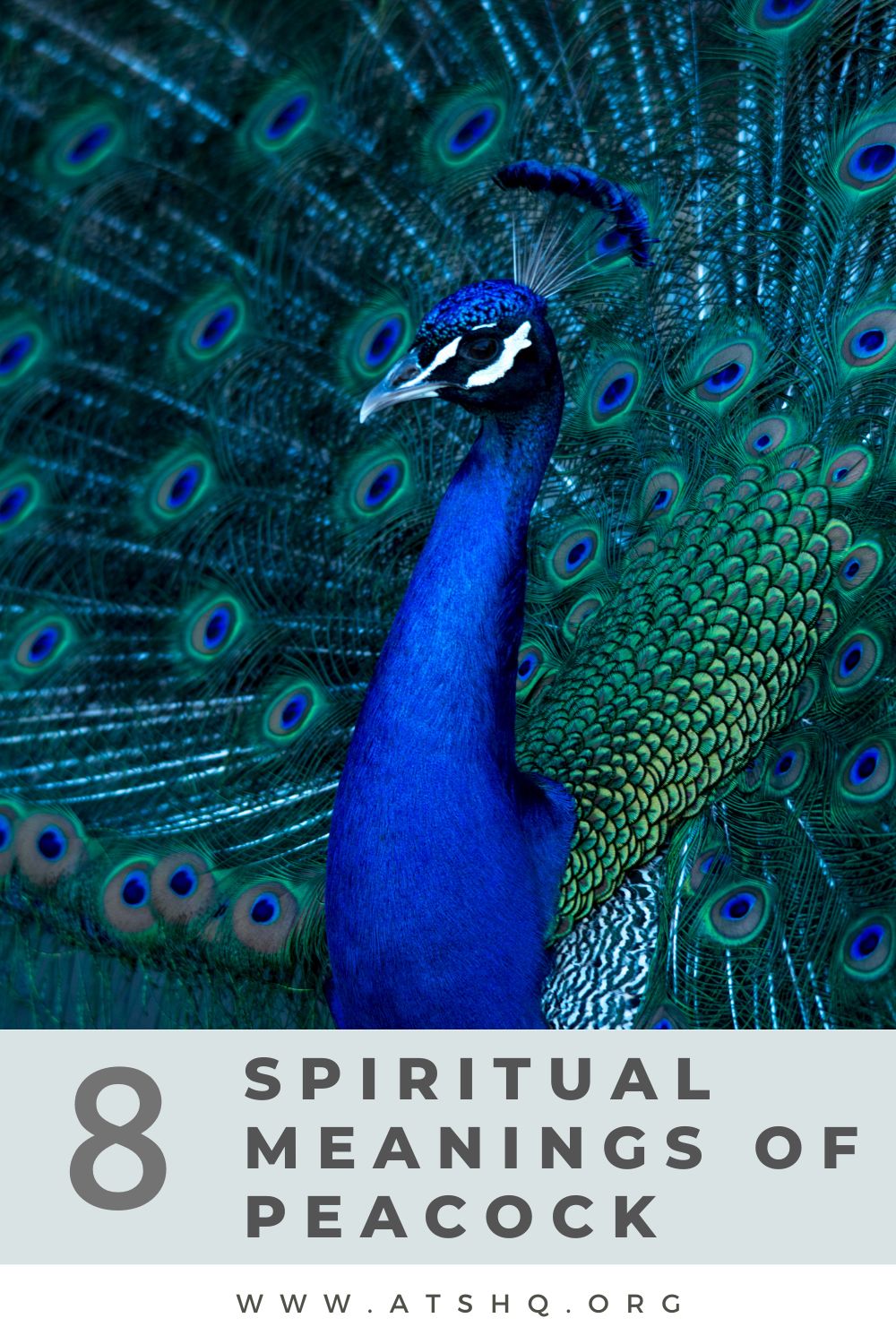 Before looking at the symbolism of these birds, it’s important to appreciate their characteristics and traits.

The most obvious place to start is with their feathers. After all, these are how most people distinguish peacocks from other birds. It takes peacocks three years to fully develop their colorful feathers and it is only actually male peacocks who have them. Female peacocks are a lot blander-looking and are called peahens.

The reason for these vibrant feathers is all to do with peahens though. The striking colors aren’t only impressive to the human eye but also to peahens. A peacock’s tail feathers are what attracts peahens and are the reason for them getting a mate each season.

Another cool fact about their feathers is the fact that they have crystal-like structures which reflect light. This is the reason why their feathers can sometimes look like they change colors, as they reflect different wavelengths throughout the year.

Peacocks are found predominantly in Africa and Asia in countries such as India, Pakistan, Sri Lanka, and the Democratic Republic of Congo. Regardless of which country they live in, they look for open forests to make their habitats. While they prefer being on ground level, they do tend to fly up to tree branches at night to rest and to keep safe from nocturnal predators.

Over the years, humans have destroyed their natural habitats which resulted in peacocks relocating to public places such as parks and farms, making sightings of them far less rare than previously.

Peacocks are omnivores which means they eat both plants and insects. In addition to this core diet, they have also been known to kill and eat small snakes. They do their hunting/foraging during the day in small packs before reconvening later in the day with a larger group to sleep.

They have large beaks and a strong sense of smell which they combine together to kill and eat prey.

Peacock Symbolism Around The World 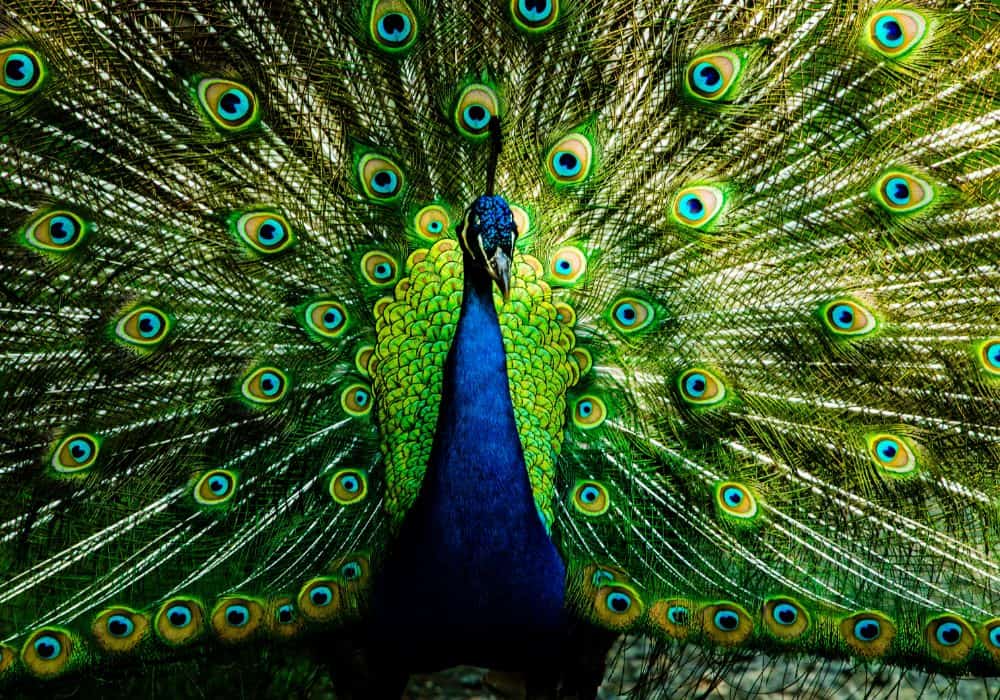 Now that you have a greater understanding of the characteristics and traits of a peacock, it’s time to look at how they are symbolized across the world. While they mean different things to different cultures, it’s important to note that, in general, peacocks are seen as symbols of confidence, pride, integrity, and wisdom.

Peacocks have huge symbolic importance in India. In fact, they are the national bird of India so it doesn’t get much more important than that. In the 17th century, a throne was built for Sah Jahan, a Mughal emperor, which featured two peacocks covered in gold and jewelry to symbolize wealth, prestige, and power.

Although that throne, in particular, was stolen, other thrones in India have featured the same type of imagery. Peacocks are so important to some Indian households that their feathers are kept as ornaments as it is believed that their feathers will bring good luck and health to members of the household.

Dravidians, a cultural group of people who reside in South India, believe that the peacock resembles Mother Earth. They also believe that the feathers of a peacock are sacred, displaying how important these creatures are to people throughout India.

The peacock is also looked at fondly in China. In Chinese mythology, they view the ‘eye’ on their tails as a symbol of protection and awareness. They are also seen as the real-life version of the mythical phoenix.

One of the most famous tales in Chinese mythology that features peacocks revolves around Goddess Guan Yin. Guan Yin was the Goddess of Mercy meaning that many people in China see the birds as symbols of forgiveness and compassion.

In more modern times, soldiers in the Chinese military used to be given a peacock feather as a badge of honor for fighting for their country. This resulted in peacocks being symbols of bravery and duty.

Many peacocks are native to Central Africa so it’s unsurprising that they are looked at symbolically and spiritually by people from this part of the world. In general, peacocks are looked at as sacred and powerful beings with some African Chieftains being known to wear peacock feathers around their heads to symbolize this.

In other parts of Africa, they believe that peacocks saved the world due to an ancient tale told by the Yoruba people of Western Africa.

The story tells of how the people on Earth had grown tired of serving their creator, called Oludumare, and looked to banish him from the world that he had created. As a result, the creator stopped providing Earth with water, which resulted in trees, plants, animals, and even humans dying.

The people on Earth soon realized they had made a mistake and needed to send a message of forgiveness to the creators. Many birds tried and failed which left the peacock as the final hope despite many people claiming that the peacock was too pretty and pampered to make the perilous journey.

However, the peacock succeeded despite losing many of its beautiful feathers on the journey. Oludumare appreciated the effort that the peacock had gone to and accepted the people’s apology and returned water to Earth in addition to giving the peacock its feathers back and making it his official Messenger.

As a result of this story, many people in Western Africa believe peacocks to be messengers of God and sacred animals.

Ancient Greece had myths and legends about almost everything so it’s no surprise that peacocks also feature in their folklore. In one story from Greek mythology, Hera, the Goddess of marriage, women and childbirth, places the eyes of Argus, a servant to Hera who had 100 eyes, into the tail of a peacock.

She did this because she suspected that Zeus had eyes for another woman and she wanted to keep tabs on him. Therefore, in ancient Greece, they saw peacocks as watchful observers and as special birds of Hera. 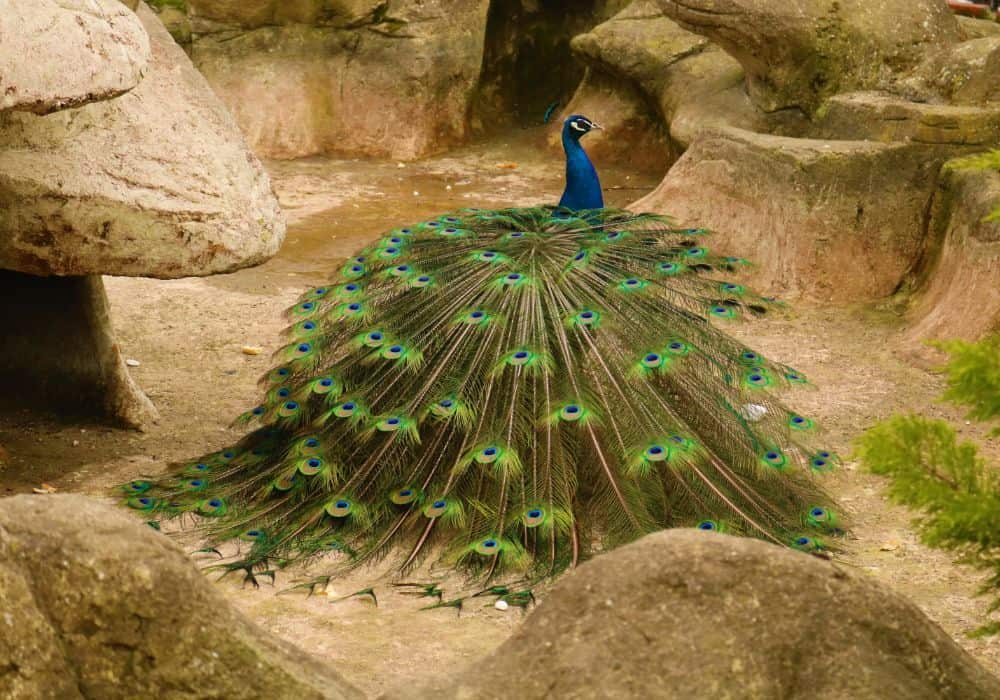 As we’ve seen, peacocks are important symbols to various cultures and countries but they also play a part in religion.

Hinduism is the most popular religion in India where the peacock is the national bird. In Hinduism, the peacock is often associated with certain Gods and Goddesses, suggesting that Hindus see peacocks as sacred and godly beings.

For starters, the creation of peacocks is credited to Lord Vishnu who used the feathers of a Garuda (a mythical bird) to bring about the existence of peacocks. In other scriptures, Goddess Saraswati and Goddess Lakshmi are pictured as mounting peacocks.

One story that sticks out within Hinduism that features a peacock is a story to do with Lord Krishna. The story tells of how Krishna was fond of peacocks and would play his flute to soothe them. One day he was playing his flute and a group of peacocks got up and started dancing along to the melody.

The peacocks enjoyed the tune so much that the leader of the peacocks presented Krishna with one of its feathers as a symbol of his gratitude.

Another story from Hindu folklore tells of a peacock offering shelter to a God called Indra during a fight with an evil king. As a thank you for the protection, Indra gives the peacock a thousand eyes as a gift so that it could see everything and everyone.

Peacocks are featured in the Bible signifying that they are important one way or another to those who follow Christianity. In the Bible, peacocks are described as the bird that came from India with King Solomon alongside gold and other treasures. As a result, Christians view peacocks as regal birds that symbolize wealth, royalty, and prestige.

Peacocks are also seen as symbols of resurrection due to the fact they regenerate feathers each and every year. This is important to believers of Jesus Christ as he was said to resurrect from the dead after being wrongfully crucified.

Peacocks aren’t looked at fondly in Islam when compared to other religions and this stems from a story relating to the devil. First of all, Muslims believe that peacocks are a bird that comes from paradise but they also believe that they are responsible for letting the devil (in the form of a snake) enter paradise.

They believe that the devil charmed the peacock by playing on the peacock’s vanity to gain entry to paradise where he then corrupted it. As a result, Muslims see peacocks as symbols of the possible repercussions of vanity and untrustworthiness.

The symbolism of peacocks in Buddhism is similar to their symbolism in Christianity in the sense that Buddhists see them as symbols of reincarnation and immortality due to the fact they can regenerate feathers.

In addition to this, they look at their mating call of opening their glorious feathers as a symbol of the lotus flower opening its petals. Buddhists, therefore, look at them as creatures who have reached the ultimate aim of Buddhism – to reach enlightenment.

How To Interpret A Peacock Encounter? 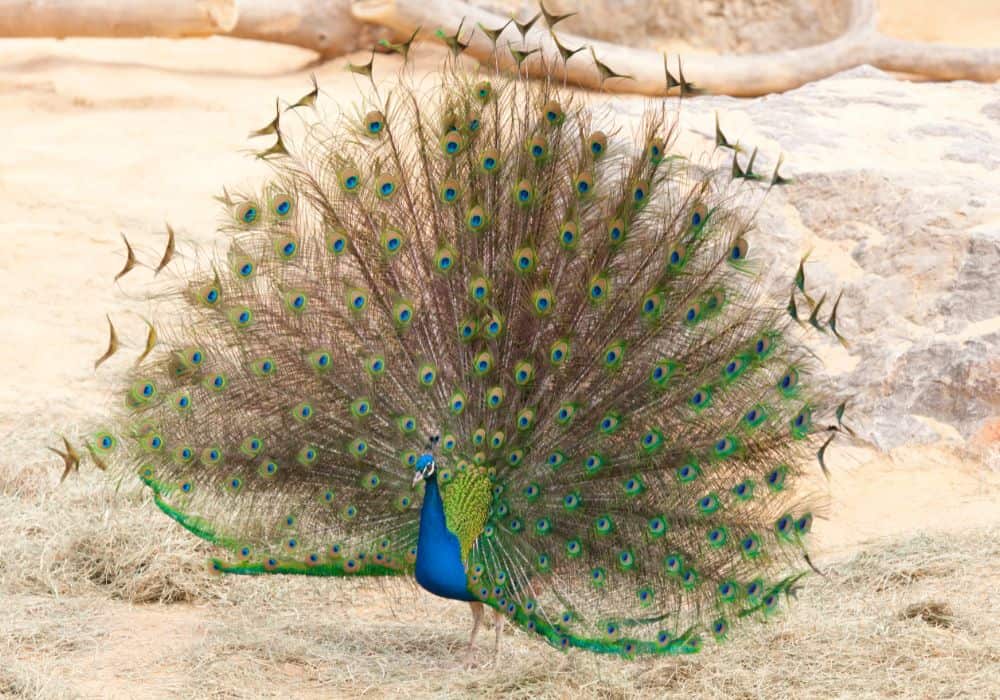 Now that you have a wealth of knowledge under your belt concerning peacock symbolism, you should start to consider what it means whenever you encounter one of these creatures.

The first thing you should consider when you see a peacock is the importance of self-growth. While it’s easier to get bogged down on appearances and beauty, a peacock sighting should remind you that inner and outer beauty will only be found through growth and by accepting who you are. After all, peacocks aren’t born as beautiful beings with exuberant feathers but grow to become that.

Another thing that you should consider when you encounter a peacock is that it may well be a sign for you to step out of your comfort zone and embrace your more eccentric side. You may be stuck in a job that you don’t like or in a relationship that you don’t want to be in. The sighting of a peacock should remind you of the value of taking risks and being vibrant.

Please note that you should also consider these interpretations if you are having peacock dreams – it doesn’t have to be a ‘real life’ encounter.

A peacock spirit animal means that you share almost identical character traits with these magnificent birds. Firstly, you are likely going to be confident in what you do and you are also going to be destined for a life of wealth and good fortune. Remember this and don’t settle for anything less than you are worth. 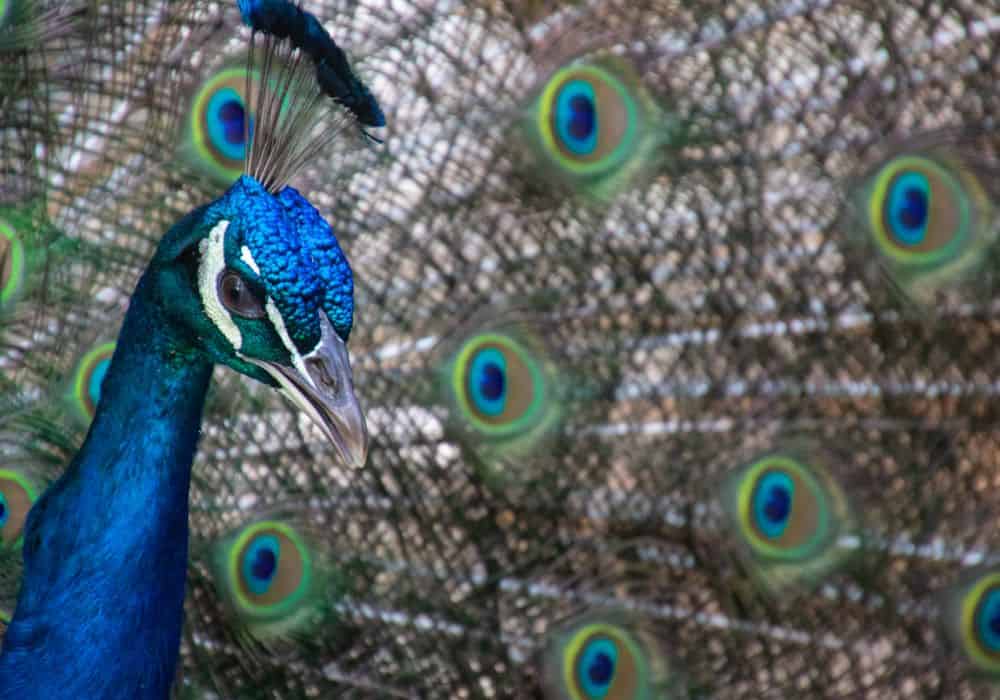 A peacock power animal will show itself to you when your life has become mundane and drab. You will have lost sight of what makes you happy and the peacock spirit animal can spring you back to life and give you a new purpose to seek out new adventures and reach new heights.

A peacock totem animal will help guide you and your loved ones through life, ensuring that you always appreciate your inner and outer beauty. They will make sure that you never lose sight of who you are and the unique personality traits that make you the person that you are.

To conclude, peacocks are typically viewed as symbols of wealth, beauty, prestige, and good fortune. The fact they have significant importance to a variety of religions, countries and tribes should demonstrate just how spectacular these birds are. Next time you encounter one, don’t take it for granted and appreciate what you are seeing and what it could mean.