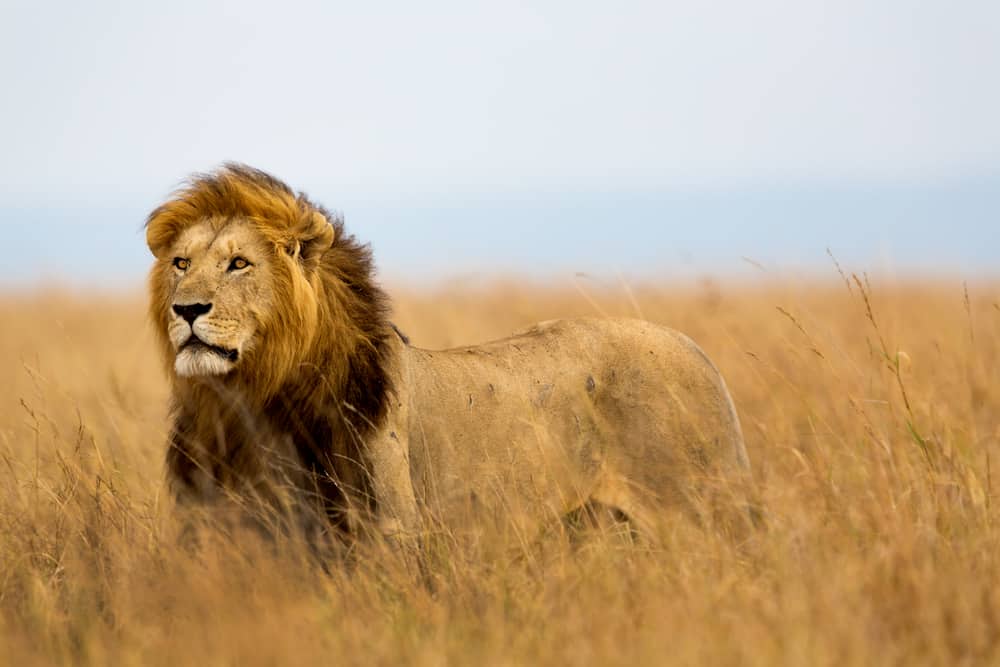 The symbolism of the lion is one that is usually correlated to pride, strength, courage, and royalty. The lion has been a symbol of kings, noble houses and royalty in many cultures for hundreds of years, as the animal is seen as the king of the plains and king of the beasts.

You can also find symbolism attached to the lion throughout Christianity, Greek mythology, and astrology; and that would be only naming a few of the aspects of our cultures where you can find deeper meaning and lion symbolism. 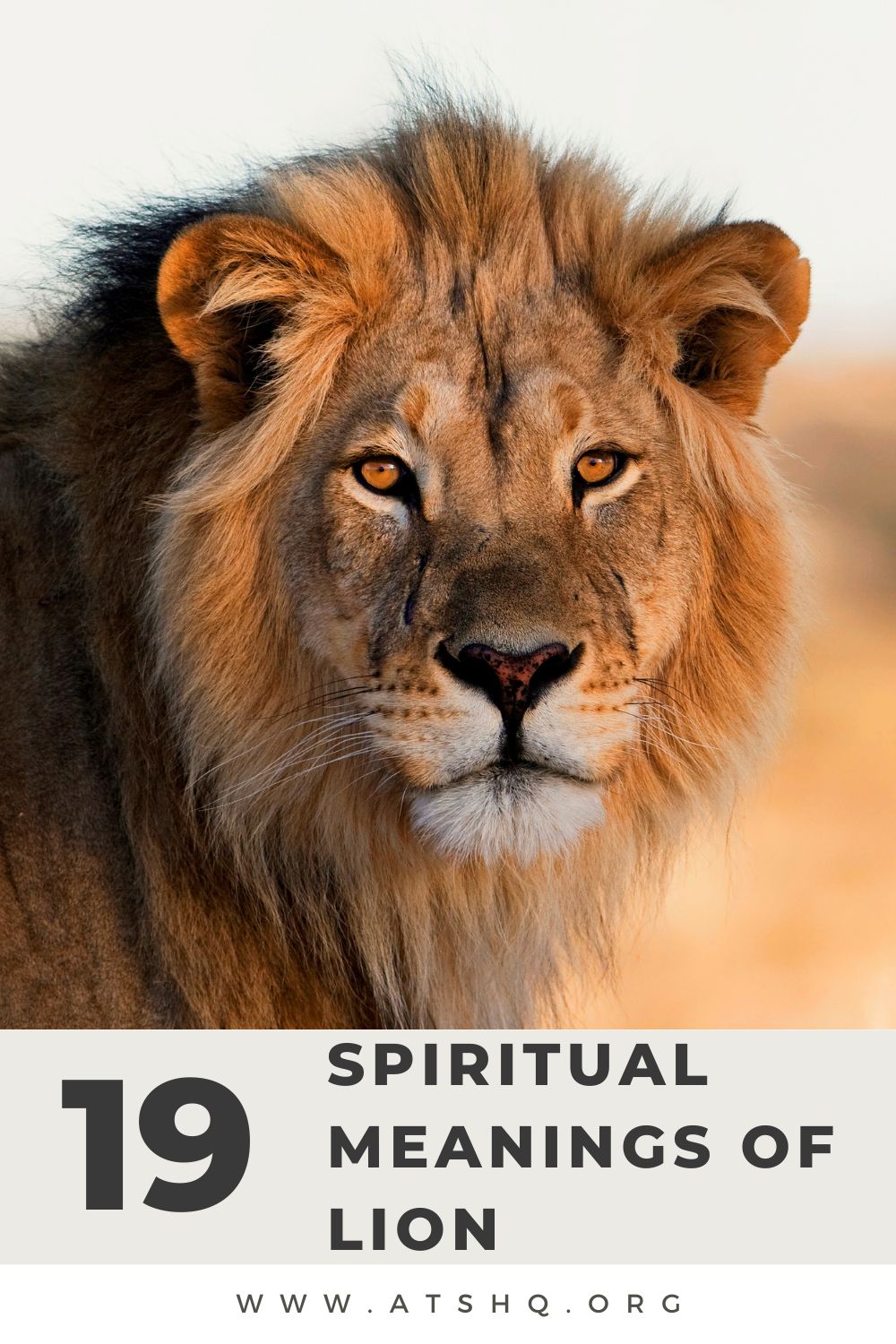 Symbolisation of the Lion

Strong animals often attract symbolism of strong meaning. In the case of lion symbolism, this is shown through its ability to represent strength, leadership, and courage.

1. Lion as a symbol of power

The lion’s symbolism is that of regal stature, and many would argue that its connection with pride and power echoes the traits of a king. The symbol of power tied to the lion speaks of its powerful presence in nature as well as its mighty appearance.

2. Lion as a symbol of pride

A lion often symbolizes pride, which is also the correct word to use when referring to a group of lions. Pride is sometimes seen as a negative trait, but the lion symbolizes a different type of pride, one that speaks to the confidence in a person, and their ability to keep their head as high as their belief in themselves. That is why they say that the zodiac sign of Leo is the proudest of them all.

3. Lion as a symbol of strength

The lion is also a symbol of strength. This symbol can be applied to both matters of the body and matters of the mind. A lion is known for its ferocious sheer strength and brute force. But the symbol of the lion also speaks to mental strength, which means persevering through hardships and remaining graceful through difficult times.

4. Lion as a symbol of wisdom

The symbol of great wisdom often falls upon a lion. Due to its constant connection with regality and royal positions, it is also expected to carry the traits of a leader. Wisdom is a powerful and useful trait to have in a leader or ruler. Some may argue that the lion’s symbolism also encompasses this specific trait due to their very serious-looking faces, which looks like they spend most of their time in deep thought.

5. Lion as a symbol of protection

The female lions often symbolize protection. This is attributed to their strong drive to protect their family systems within their pride, specifically their cubs, earning them to be deeply connected to the symbols of a warrior, protector of the weak, and motherhood. Many people even choose to do lion tattoos, crowned lion for example, because it symbolizes many things for many people.

6. Lion as a symbol of family

Due to the lions’ intricate family systems within their pride, they often symbolize the spirit of family. The pride often reflects family structures that are familiar to us, and so the symbolism of the lion can be attached to a strong, grounded, and unshakable foundation within your close circle, family and kingdom. The lioness is a universal animal totem of protection of her lion cub, which translates to mythologies all over the world such as Indian mythology, the Greeks, and even in modern Europe. 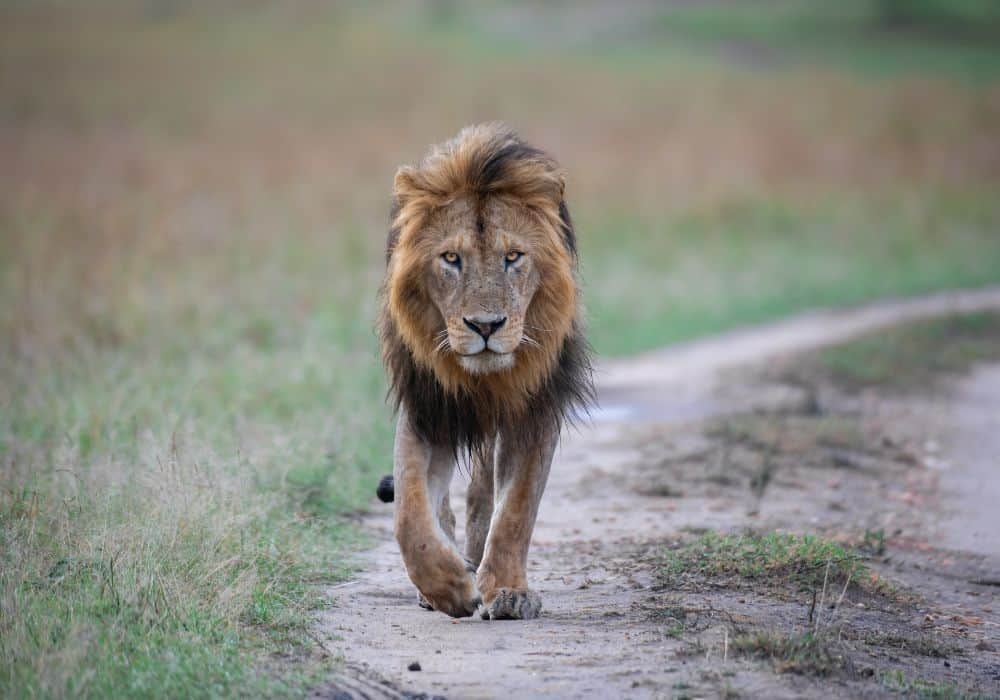 1. What does it mean to dream about a male lion?

Dreaming about a male lion can symbolize quite a few different things. One of the most common meanings of this dream is to look within yourself and find your courage. Lions symbolize courage and power, and this could be a message to you in regards to finding your inner strength and facing your challenges with courage in your heart. In other words, you can find your personal power through the symbol of the lion.

Another meaning of dreaming of a lion is to bring forth the message of great confidence. Either this is a trait that is desperately needed in what you are about to face, or it is reassurance that confidence lies within you, but you must be brave like a lion to bring it out.

Lion symbolism is closely tied to wisdom, and this dream can be a message to seek out someone you consider to be wise, and ask for their advice regarding a situation in your life. It can also be interpreted as a sign that you should seek within yourself to find the wisdom to guide you further in your endeavors. The Lion will always ask you to seek out traits within yourself due to its heavily tied symbolism to leadership and strength.

2. What does it mean to dream about killing a lion?

There are many folktales and religious stories about a hero killing a lion with his bare hands. The killing of a lion in your dream is symbolic of defeat. It means that you are seeking to defeat or overpower someone that you find yourself in a struggle with, and that you are likely to succeed. This could be in regards to an enemy or an authoritative figure in your life or workplace.

A lion’s symbolism can also often be attached to oneself. Therefore, in this scenario, defeating a lion can be symbolic of defeating your own fears and insecurities. The symbolism of the lion is greatly synonymous with confidence and perseverance, and so this could be a sign that you are overcoming certain aspects of yourself.

3. What does it mean to dream about a pride of lions?

Usually, these dreams speak to a group effort of some kind, whether it be in your professional life or personal life. The lion pride is also a symbol of teamwork and unified effort and can be an attempt at pointing out where you lack this strong foundation.

4. What does it mean to dream about being chased by a lion?

A dream like this could stem from experiencing aggression in your waking life. Maybe you are having difficulty communicating with someone, and have been met with anger. Arguments might have been more common recently. These are all signs to look within. If you are the aggressor, this means that you are trying to run away from your own unwanted feelings.

Being chased by a lion could also be a sign of having to make an important decision. There is an issue you are facing in your life, do you want to run away from it or deal with it? Sometimes, letting things go and taking the high road is the best way to be rid of the issue. 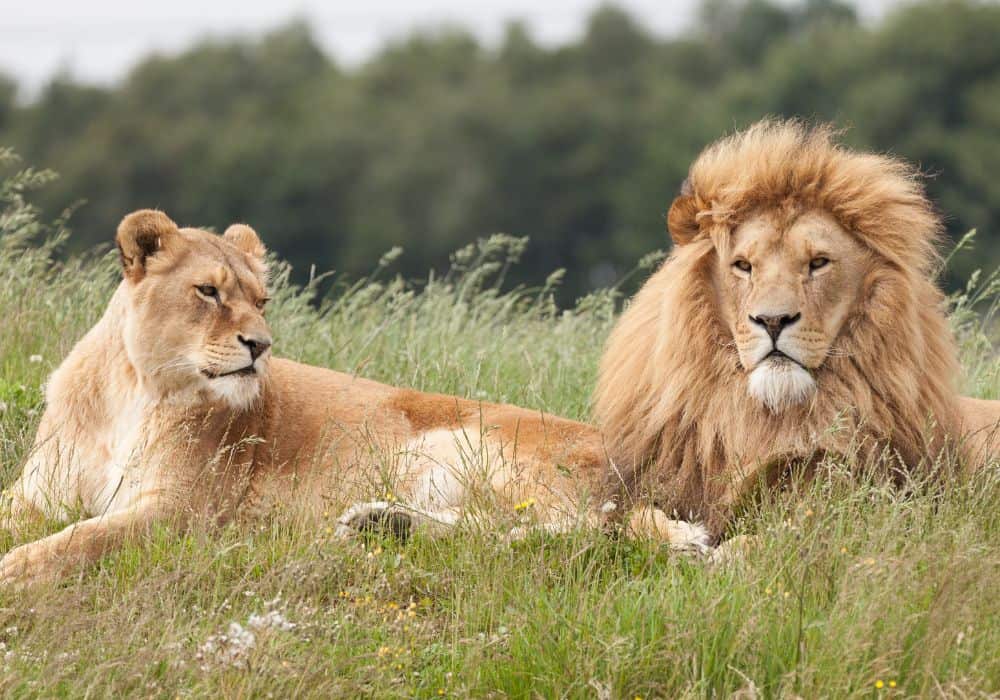 The symbol of the lion was one of great importance in Ancient Mesopotamia, and the Sumerians used it as a recurring character in both stories and as the physical representation of their deities.

The lion symbolism shines brightly in the stories of Gilgamesh who defeated a lion with his bare hands, and again as the physical representation of the God Lamassu.

Lamassu was sometimes depicted as a lion with wings and was the deity of protection, representing the stars, constellations, and parent stars.

The lion symbol is also closely connected to the Sumerian Goddess Inanna, who is often depicted as standing on two lions. Inanna is the goddess of sensuality and war, perfectly encompassing both the male and female lion symbolism.

Lion symbolism in Africa is applied to a wide variety of stories, tales, and depictions. It is true that even here, the lion is symbolic of royalty, but the traits that are applied to kings may differ.

In many folk tales of lions, they are often depicted as tricksters that sometimes have the capability of being cruel and arrogant. These are all traits that fall into the right category of a king if he treats ruling as a privilege he wants rather than a duty he must fulfill.

In Christianity, Daniel defeated the lion in the den when ancient Egyptians threw him in there to fight. Speaking of ancient Egypt, the most famous symbol is the sphinx, the part-lion creature guarding the door of the pyramids and setting a potential trap for those who do not know how to solve the riddle.

Lion symbolism in Greek mythology is widespread. But perhaps one of the most well-known stories that feature a Lion is the story of Heracles. In this story, Heracles kills a lion who has remained undefeated and unaffected by any man-made weapons. And so Heracles kills the lion using his bare hands, much like the story of Gilgamesh.

Heracles then wears the lion’s coat as a symbol of his strength.

In Ancient Rome, Lion symbolism was connected to royalty and seen as an emblem of the emperor. Lions were often brought out to fight against gladiators as entertainment for the people. The lion was chosen due to its well-known symbol as a king of beasts, and any man who could defeat a lion was a champion of great strength and status.

The likeness of the lion can be found depicted in the shape of statues in many places in China. It is mostly found in the entrances of buildings. Here the symbol of the lion is a guardian and is meant to protect from negative energy and evil spirits. But China also has a similar view of lion symbolism as many other parts of the world, where the male lion often represents the emperor’s supremacy, and can be seen depicted with its paw on a ball. The female lion is usually depicted with a cub at her side, as a symbol of nature. Both of these lion symbols are thought to bring good fortune and protection. 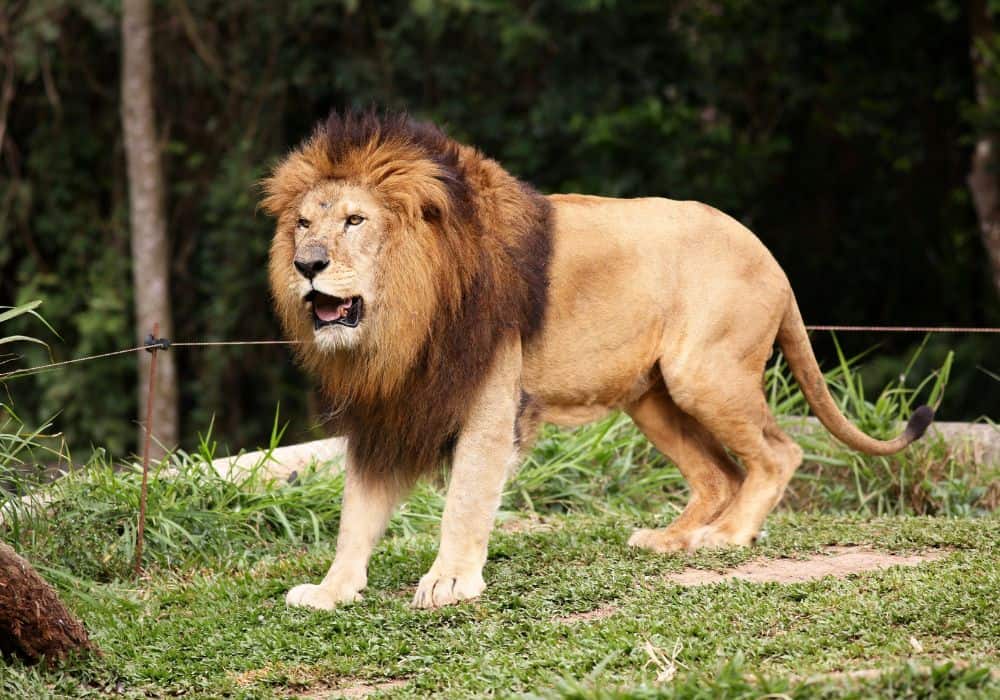 The Lion as Your Spirit Animal

1. Lion spirit animal as a symbol to embrace your courage

As a person who shares traits with the lion, you are naturally courageous and someone who speaks up for the less vocal personalities around you. You face every challenge head-on and don’t back down easily, even if things don’t go according to plan.

2. Lion spirit animal as a symbol that your confidence is contagious

Although you are often the life of the party and someone who can easily turn the heads of any crowd, your confidence is not limited to just yourself. With your lively and expressive way of facing life, your confidence in yourself is contagious to those around you. People naturally gravitate towards your charm and charisma, making you a naturally born leader.

3. Lion spirit animal as a symbol of a naturally protective spirit

Seeing as the lion symbolizes leadership and usually being the head of a group, you are naturally protective of those you love. This is a wonderful trait that often translates with the care and love you are hoping for, but beware of becoming overprotective of those around you. It is still okay to let people learn from their own mistakes.

4. Lion spirit animal as a symbol to choose wisdom

The lion is symbolic of the wise ruler, and due to this trait, people around you might look to you for advice on situations they have difficulty navigating. Remember to apply wisdom to others’ problems, as well as your own. The wisdom comes naturally to you, and you are able to consider many aspects of an issue deeply and come to a wise solution. You have also been privileged with creativity, apply this mindset to your problem-solving skills and you will remain unstoppable.

In sum, the lion is a very powerful symbol of various things across cultures. It is a common national symbol, it is found in the cultures and religions of Sri Lanka, in the Chinese culture, and even in Buddhism. We can conclude one thing which this creature is: the lion is a powerful animal.