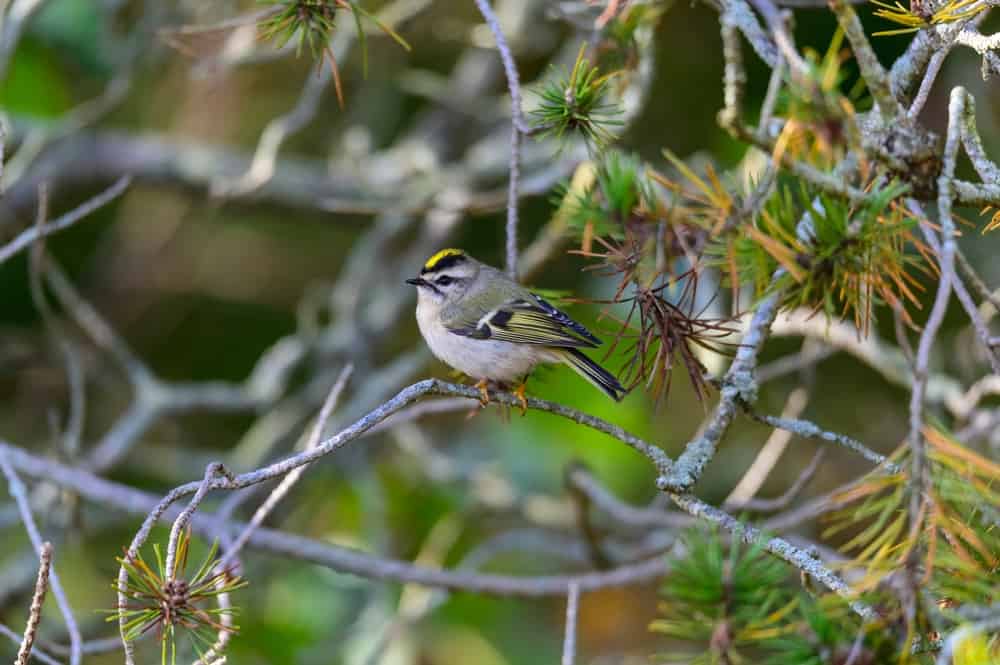 Kinglet is a small bird famous for its colored crown on top of the head and constant snapping of its wings, which might look like a display of nervous behavior to an outsider.

However, kinglet is just an animal full of life and joy. The actual meaning of the seemingly never-ending flickering of the wings, the “size” of this bird, and the way it approaches everyday life are just some of its attributes, thanks to which the kinglet symbolizes many positive things.

But before learning all about the kinglet symbolism, kinglet meaning in mythology, what dreaming about kinglets means, and other things, let’s take a look at this species, its types, and characteristics. 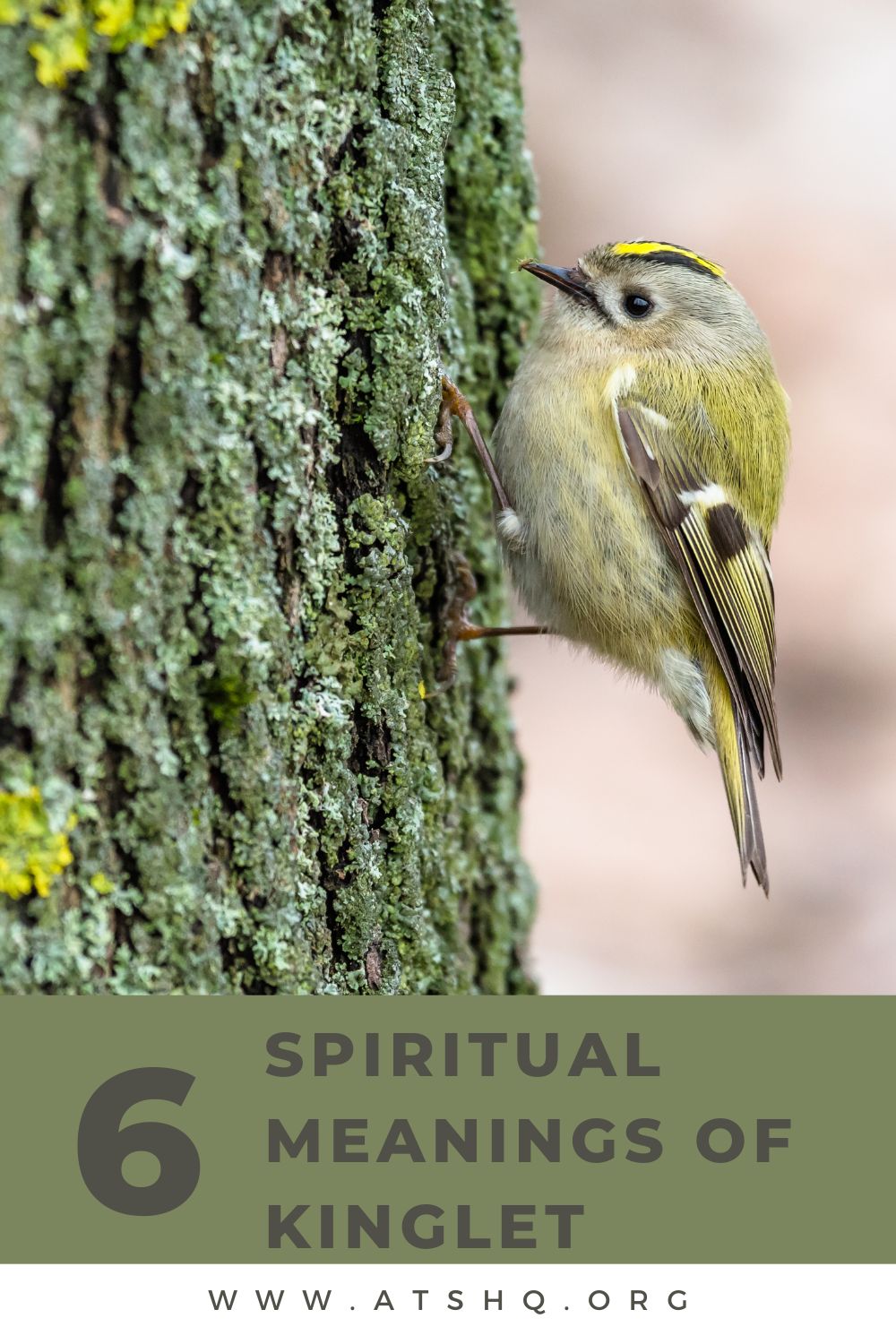 Kinglet is a bird from the Regulidae family with an average length of four inches (ten cm). The wings of these tiny creatures, whose natural habitat encompasses North America, Europe, and Asia, aren’t much longer either, being between six and seven inches (16 and 18 cm).

Common to all kinglets is a streaked line on the top of their head that looks as if someone painted it with a brush. It can be orange, yellow, golden, or red, and males have more pronounced tops than female kinglets.

In addition, almost all species have two black stripes surrounding the colored crown.

The feathers on their back and upper body are usually some hues of green, such as gray, dark, or olive green, while the underparts are of a lighter color, whitish or light grayish.

Another distinctive feature of kinglets is, at least for their size, loud vocalizations.

The most famous representative of this family is the ruby-crowned kinglet, which has a bright red crown patch on top, mostly tucked under the olive-green feather. Also, it is slightly larger than other kinglets and the only type of kinglet that does not have black stripes along its colored crest.

Because of an even more pronounced vocalization and the features mentioned above, the ruby-crowned kinglet got its genus (Corthylio) within the Regulidae family. Then, the species name in Latin was changed from Regulus calendula to Corthylio calendula.

Common firecrest, Madeira firecrest, flamecrest, and golden-crowned kinglet are other species in the Regulidae family, which used to be a part of the Old World warblers bird group.

Thanks to their high metabolic rate, kinglets are highly active birds that are always on the move and look for food like insects, spiders, and berries among the dense branches and foliage of trees.

Although kinglets nest in a variety of habitats, they mostly prefer conifer forests and have a habit of making nests at the tops of the trees.

This minuscule bird, also known as petty king, which is a Latin translation of its family name, produces a large clutch of eggs of up to 12. The incubation lasts about two weeks and is carried out by the female. 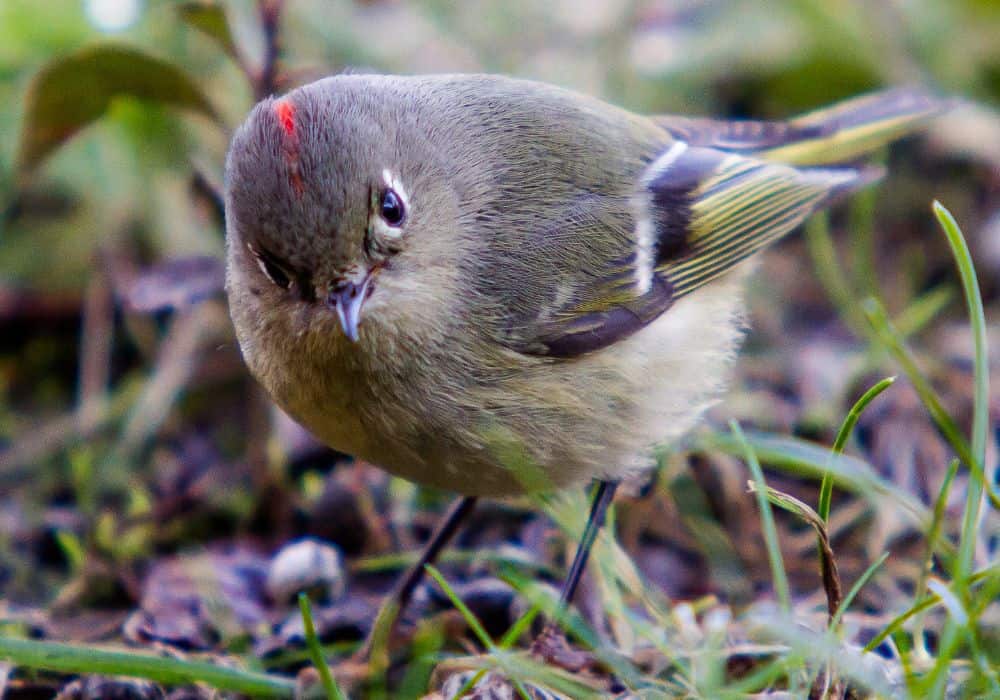 Kinglet is a living and flying embodiment of the saying: good things come in small packages. As one of the smallest but at the same time the most active birds in the world, the kinglet can be said to be a symbol of inexhaustible energy and self-confidence.

However, that energy and self-confidence come from an unexpected source. Therefore, with its appearance and behavior, kinglet constantly reminds us humans and symbolizes how important it is to have courage and show the world that our looks don’t necessarily determine our worth.

I am what I am, wonderfully strong – says the kinglet! Remember this every time you lack confidence or hope. No one is perfect, but with enough effort and work, anyone can reach their goals! Sometimes it is enough to accept your flaws, emphasize your virtues, and “wear” them proudly.

Although it may seem like an insignificant factor in the larger picture of the food chain, the petite kinglet actually carries a message of fulfilled potential, courage, and optimism.

This symbolism is even stronger when we know that kinglets, despite their “size”, are not in danger of extermination and that they will fiercely fight against anyone who attacks them or their young ones.

Having kinglet as your spiritual animal means that you look at life with eyes full of optimism and cheerfulness and have the power to awaken the sleeping, long-forgotten child in even the oldest person, just because of the large amount of energy and optimism that lies within you.

And just like kinglet, you are a person who is constantly drinking the “nectar of life” with all your senses, enjoying every new day from morning to night, as if that day dawned only for you and as if it were your last!

The symbolism of enjoying every day to the fullest is especially precious when we look at it from the point of view of a kinglet because they are creatures with one of the shortest maximum life spans of all birds – up to only six years! 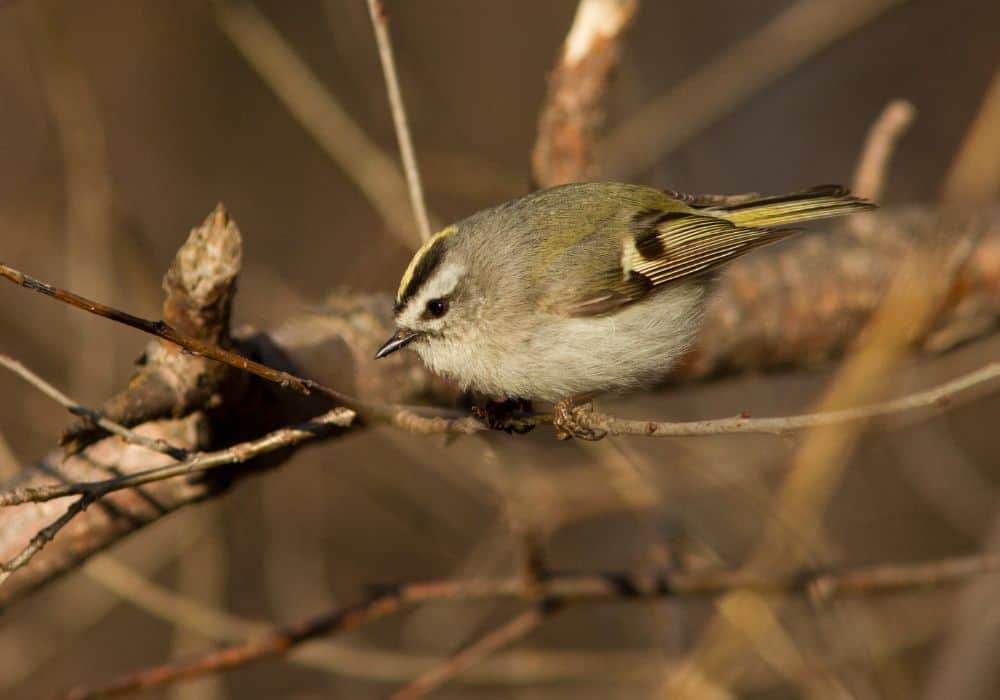 The kinglet totem animal is associated with perseverance, fearlessness, and enjoyment.

If the kinglet is your totem animal, you are willing to go where other people can’t or won’t. With your fearless nature, strength, and determination, you can surpass expectations and achieve a lot.

You don’t let obstacles stand in your way, and you keep going until you achieve your goals, no matter how high or far they are. All this is to say that those with kinglet totem animals don’t like negativity and vigorously tackle problems that may arise along the way.

But you’re not just concentrated on making it to the finish line. Like the kinglet goes through life singing and being cheerful, you are always full of energy and ready to enjoy all of this right here and now.

Many tales and myths have been told about the tiny kinglet. However, the story about its migration is one that involves goldcrest, a type of kinglet and Europe’s smallest bird, which has persisted to this day and is even present in this animal’s nickname.

In ancient times, people started to notice the arrivals of many goldcrests in autumn, when the second migration season of these birds was in progress.

However, they could not believe that such a small bird is capable of such a long migration, which would involve a journey from Russia or one of the Scandinavian countries across the North Sea to Great Britain.

As their arrivals mostly coincided with the autumn migration season of the European woodcocks, people concluded that the goldcrest “rides” on the backs of these birds and kinglets, thus got the nickname woodcock pilots.

However, thanks to GPS tracking, we now know that despite its tiny build, this species can cover long distances during migration on its own and travel as much as 500 miles (800 km) in one day.

But this only shows that kinglet symbolizing courage and fearlessness isn’t for nothing. Kinglet, a bird weighing some 0.24 ounces (7 g) traveling all that way, is a picture of incredible tenacity, endurance, and consistency that some people can only dream of! 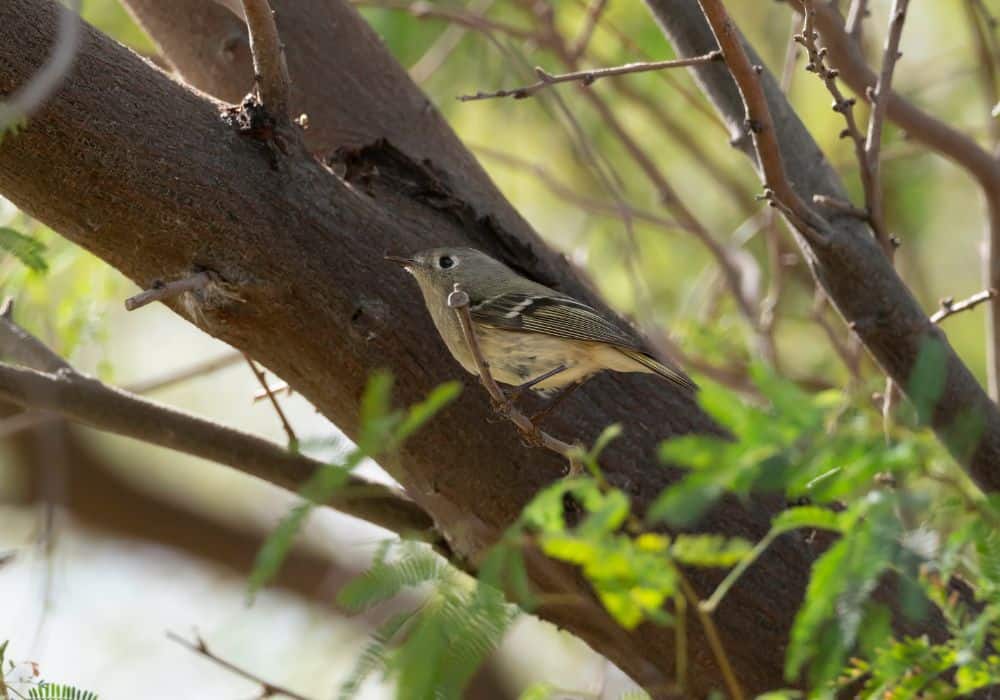 Seeing a kinglet in your dreams is a sign of joy and good times since the kinglet is a bird that brings positive energy into the home and heralds a pleasant future. Whether it’s a new job or a new love – only good news is expected from a kinglet!

But as is the case with the kinglet who, with its “Size doesn’t matter, everything’s about what you do with the opportunities life presents to you” attitude, makes the most out of every day, you will have to take advantage of the situations you find yourself in.

So, if you do happen to dream about kinglets, don’t worry about what will come next because only good things are associated with these birds, but be prepared to do your part and act.

In addition to the colorful streaks they feature, kinglets are widely known as singing and jolly birds because of their melodious chirping. Therefore, if you see the kinglet or hear its harmonious chirping first thing in the morning, your day will pass in happiness and joy.

Whether it is its energy and self-confidence or optimism and potential, there is a lot more than what meets the eye when it comes to kinglet.

Its symbolism of courage and fearlessness in mythology and heralding of good times to come represents some of the best qualities we as humans should aspire to possess.

Last but not least, people who have kinglet as their totem animal or who encounter it early in the day should feel lucky because they are persons who have tremendous amounts of perseverance and joy.

If you have questions regarding this cute bird or the vast palette of great symbols it is linked with, leave a comment.