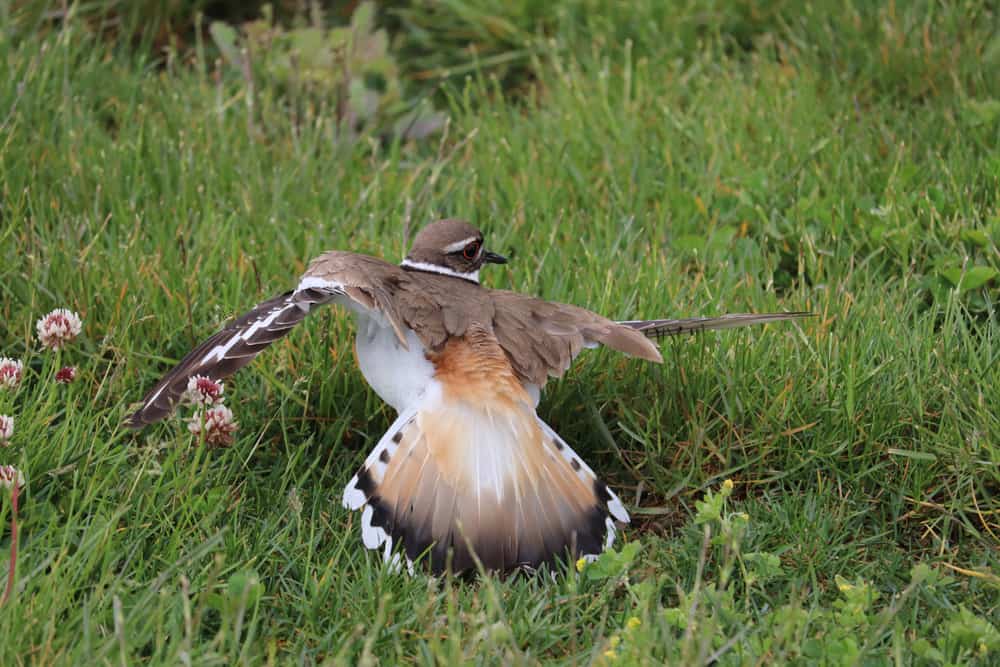 Despite their rather grisly sounding name, killdeer are in fact a harmless species of plover common across much of the Americas. Most plovers are wading birds, often found in coastal regions, wetlands, and marshes, but killdeer are notable because they frequently live and nest further inland.

It’s not uncommon to find killdeer anywhere where there’s low vegetation and flat ground. People often see them wandering across their backyards, private lawns, golf courses, or even car parks!

What causes the killdeer to stand out amongst its other plover brethren is the deceptive tactics it uses to distract predators from the nest. As a result, the killdeer is often seen as a symbol of protectiveness, family love, and smart maneuvers.

Today, we’ll be taking a closer look at some killdeer symbolism and their appearance in folklore, as well as thinking about how these fascinating birds function in the wild. 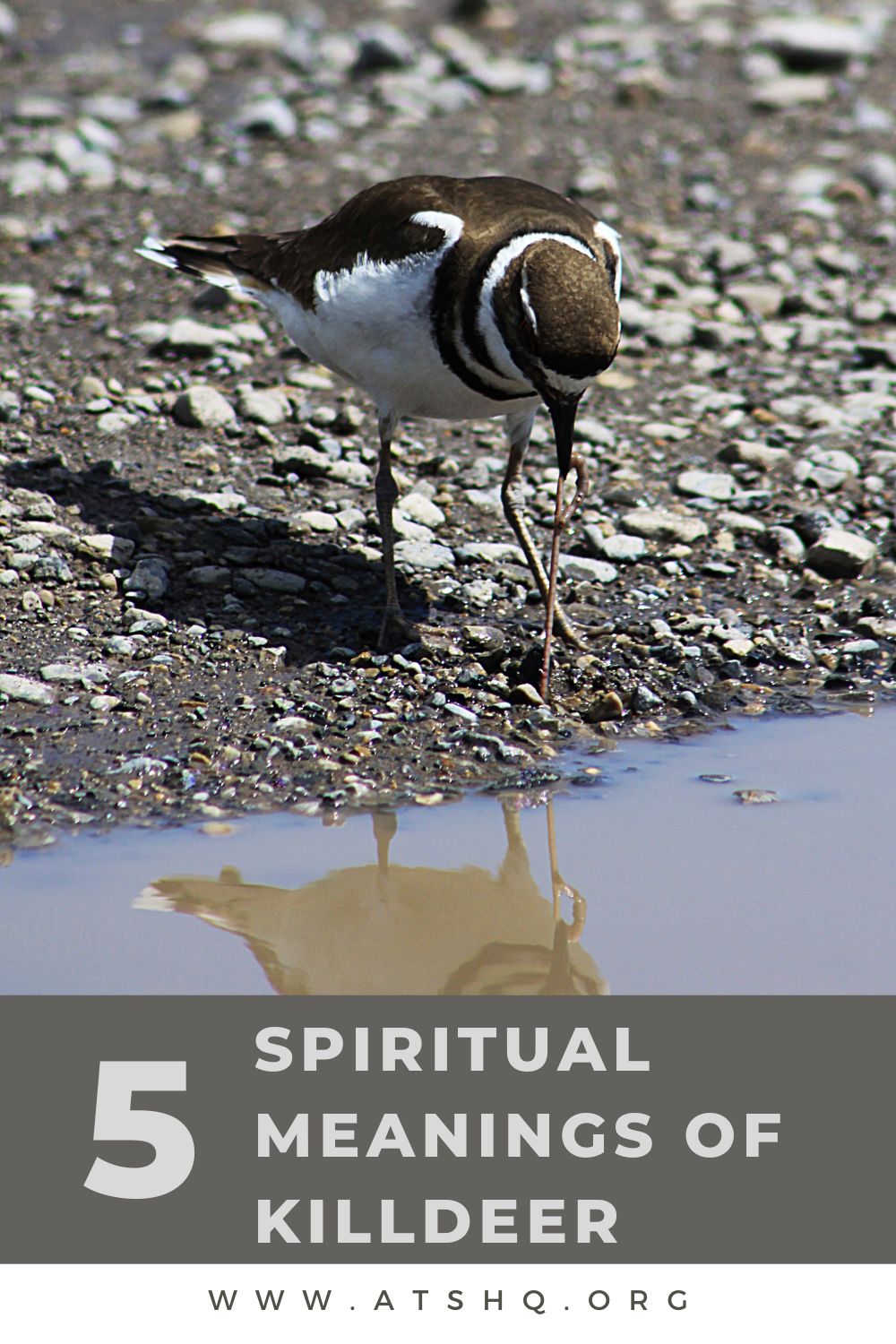 Where do killdeer get their name?

The name of this bird in fact has nothing to do with the killing of deer, or with the killing of any sort! As gruesome as it might sound to the uninitiated, the name actually derives from the shrill, repetitive call that the bird emits. Some have described it as sounding like ‘kill-dee’ or ‘kill-deer’.

Killdeer are characteristically noisy animals. In fact, eighteenth century naturalists took note of just how vocal these birds could be, giving them names such as ‘chattering plover’.

What do killdeer eat?

Like most plovers, a killdeer’s main diet consists primarily of insects. They are particularly partial to beetles and flies, but will also go for other invertebrates. Worms, snails, and spiders can all be on the menu. Killdeer will also eat seeds if live prey isn’t available.

Killdeer often forage in low vegetation and prefer short clipped grass to heavy, thick undergrowth. It’s thought this is one of the main reasons these birds like to frequent fields with grazing animals in them, such as cows or sheep.

When looking for food in shallow water, killdeer will sometimes wobble their feet in order to stir up any potential prey. They’re also not averse to letting other species do the hard work for them. In farming areas, it’s not uncommon to see killdeer trailing a tractor whilst it ploughs up a field, looking for newly unearthed worms and grubs.

How do killdeer protect themselves?

Now for one of the funniest facts about killdeer.

If killdeer think that their nest is threatened, they sometimes feign injury and distress, performing something which is often called ‘the broken wing act’. Killdeer have been observed to run away from the nest, calling out in mock panic, and positioning their feathers to make it look as if they are injured.

It is understood that this is a tactic to try to draw predators away from their eggs. This sort of behaviour has been observed to be more frequent during incubation and shortly following hatching.

Since killdeer lay their eggs in ground nests, often in areas where there are other predators, they’ve needed to develop deceptive tactics in order to try to keep their offspring safe. Of course, distracting predators by feigning injury is a risky move, and can often result in adult killdeer sacrificing themselves for the sake of their young.

Crows, raccoons, foxes, coyotes, skunks, and even domestic dogs and cats all pose a threat to killdeer and their nests. Larger animals such as horses and cattle can also inadvertently threaten the safety of their eggs.

With larger threats such as this, killdeer have sometimes been observed to display their orange tail feathers and effectively charge head-first at the perceived danger. It is thought that this seemingly reckless behaviour is an attempt to redirect larger animals away from the nest before they accidentally crush any eggs or young killdeer underfoot. 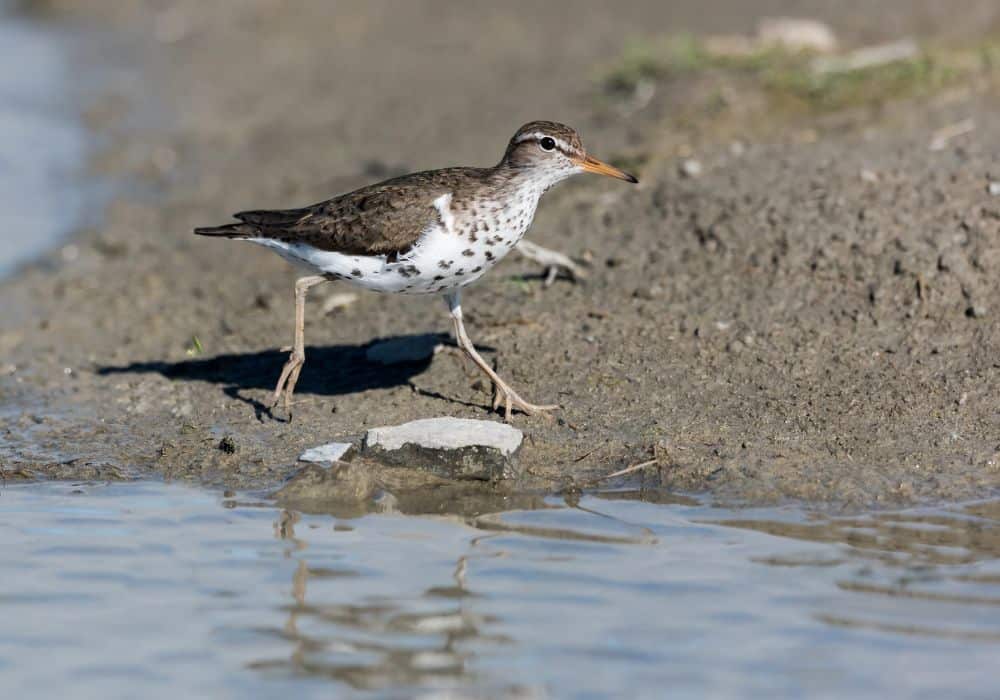 Due to their range of remarkable behaviours, killdeer have come to be associated with a range of emotions and qualities. The species has rich potential for symbolism in modern day life. Killdeer have also made appearances in several myths passed down the ages.

Killdeers’ determination to protect their offspring at all costs, even at great risk of harm to themselves, has resulted in them coming to signify protectiveness, family values, and self-sacrifice. The trickster nature of their ‘broken wing display’ has also led them to be associated with deception, illusion, trickery, and sometimes untrustworthiness.

Predominantly, however, killdeer symbolism is positive. They are a bird that is fiercely protective of their home and family, being seen as vigilant and determined parents in the face of danger and threat. Killdeer will even take turns holding a watch over their eggs or very young offspring to ensure they are guarded.

The killdeer’s willingness to hurl itself headfirst at large threats has also led it to symbolise ruthless determinism and self-sacrifice, though they are not habitually aggressive birds. 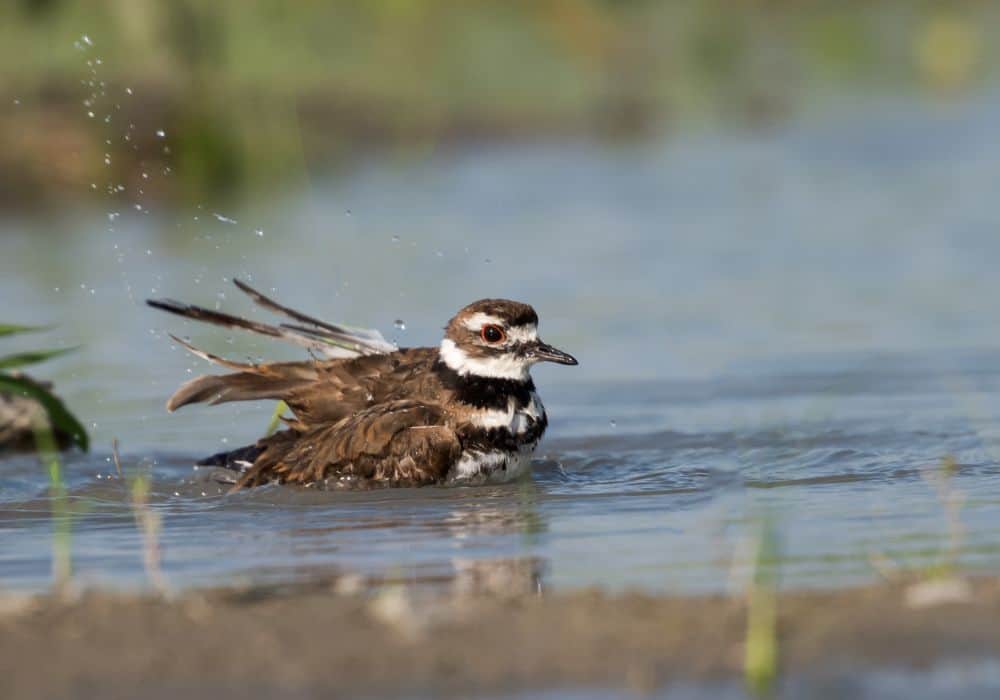 Plover more generally appear in many myths throughout the world, including Icelandic Christian myths relating to Jesus and resurrection, stories from Hawaii, Greek mythology and Celtic tales. Killdeer themselves, however, are confined to the American continents.

The primary killdeer myth appears to have its roots in Central California, recorded in an academic journal in the 1930s. In this particular story, understood to be based in Native American legend, a killdeer guards the river across which the soul passes after death.

It is said that anyone who touches this river accidentally on their passage towards the after-life will be transformed into a fish. The killdeer therefore warns souls of this as they approach. You could even say it symbolises a certain form of good luck, helpful messengers providing us with wisdom.

In this sense, the killdeer as it appears within this mythology is not a negative or morbid association, despite being associated with death and the afterlife. As totem animals, they can instead be viewed as a protective and guiding force, helping us to take the correct steps on our final journey into the beyond. 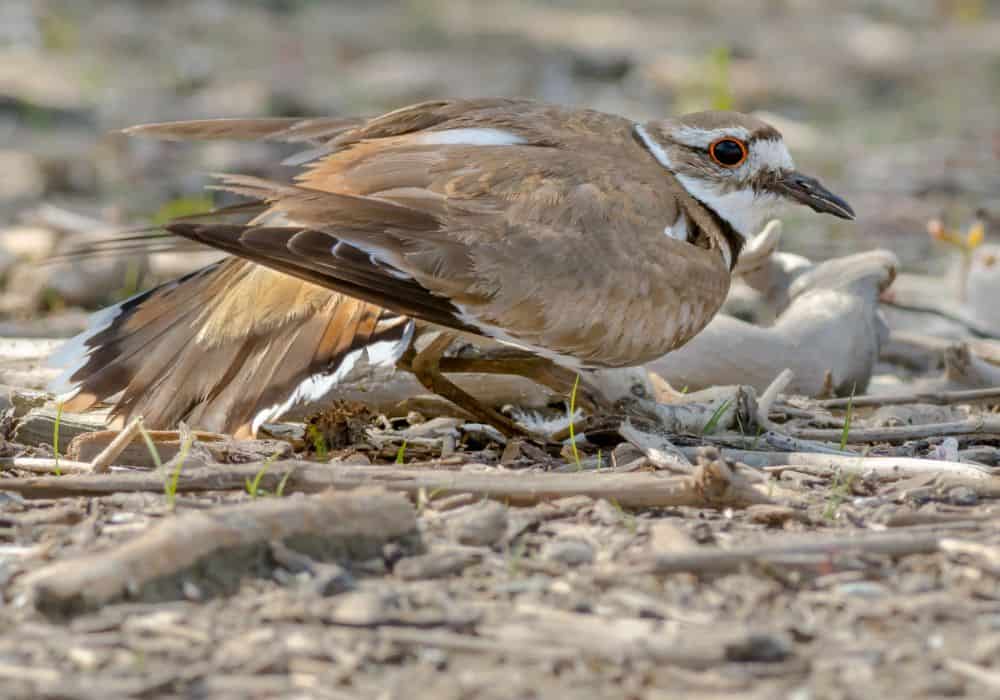 Those who identify as having the killdeer as their spirit animal are often seen as being loving, protective, family oriented, intelligent, and outgoing. They can sometimes tend to be a bit melodramatic, even theatrical, but when called upon to defend those they love they won’t hesitate to leap into action.

Some people say that having the killdeer as your spirit animal can mean you are prone to avoiding difficult emotions or evading complicated situations. Sometimes you may feel the need to distract or disguise your emotions rather than deal with them head on. You may also hide or run away from difficult conversations, confrontation when the stakes are not high, or conflict.

Nevertheless, you are also a fearless protector who can stand up for the people you love when you are called upon to do so. You are diligent, hardworking, and clever, prioritising getting things done smartly rather than simply quickly. You are praised for your intuition, persistence, and cleverness, and may even have hidden wells of creativity and vitality to draw upon when needed.

You may also be skilled at understanding and reading the emotions of others. Though some people can see this as evidence of a manipulative nature, you are capable of using this force for good! Manipulation of the world should be entered upon with great caution if it does not come from a place of love.

Encountering killdeer out in the wild could symbolise a present urge to protect, heal, or ‘fix’ other people. Is there someone in your life that you’re desperate to help? Do you feel you need to shield someone you love from the unpleasant consequences of their actions?

We all need protection sometimes, but remember – sometimes it also pays to allow people to stand on their own. Give your loved ones a chance to do things in their own way and in their own time, even if it means them taking a few turns along the way!

Conversely, if you see a killdeer performing its ‘broken wing’ display and are fooled by it, this could signify that you are being deceived somewhere else in your life. Be mindful of the company you keep, think carefully about who you can trust, and remember that things are not always as they seem!

Some have suggested that killdeer appearing in dreams can be a sign that you are avoiding difficult conversations or distracting yourself from hard decisions. Is there something tough in your life that you really need to deal with, but have been too afraid to face head on? Perhaps you need to channel the spirit of the brave killdeer and finally confront it!

Similarly, dreaming of killdeer could symbolise a wish to return to a more sheltered, protected, and innocent phase of life. Perhaps you are yearning for elements of a safe childhood, or remembering a time where you felt more secure.

Think about the people in your life who give you the most security. Count your blessings. Trust in them to provide you with the shelter you need going forward.

As you can see, this remarkable creature has given rise to a wealth of symbols, potential myths, and dream interpretations. This is in no small part due to their protective nature, tenacity, willingness to sacrifice their own safety for the safety of their family, and their sheer inventiveness in keeping predators at bay.