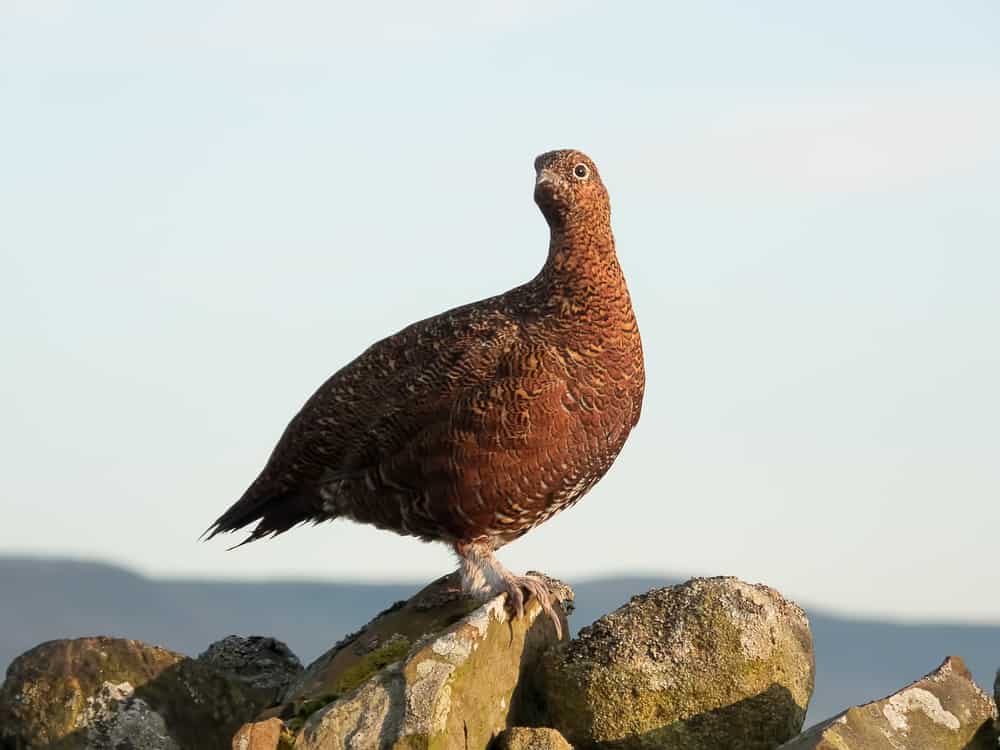 The grouse has different meanings, and it symbolizes many things, from music to strength, active parenting, and even romance.

If you have ever heard of the bird, the grouse may look like nothing out of the ordinary, but after learning about this animal, you will understand more about grouse symbolism. 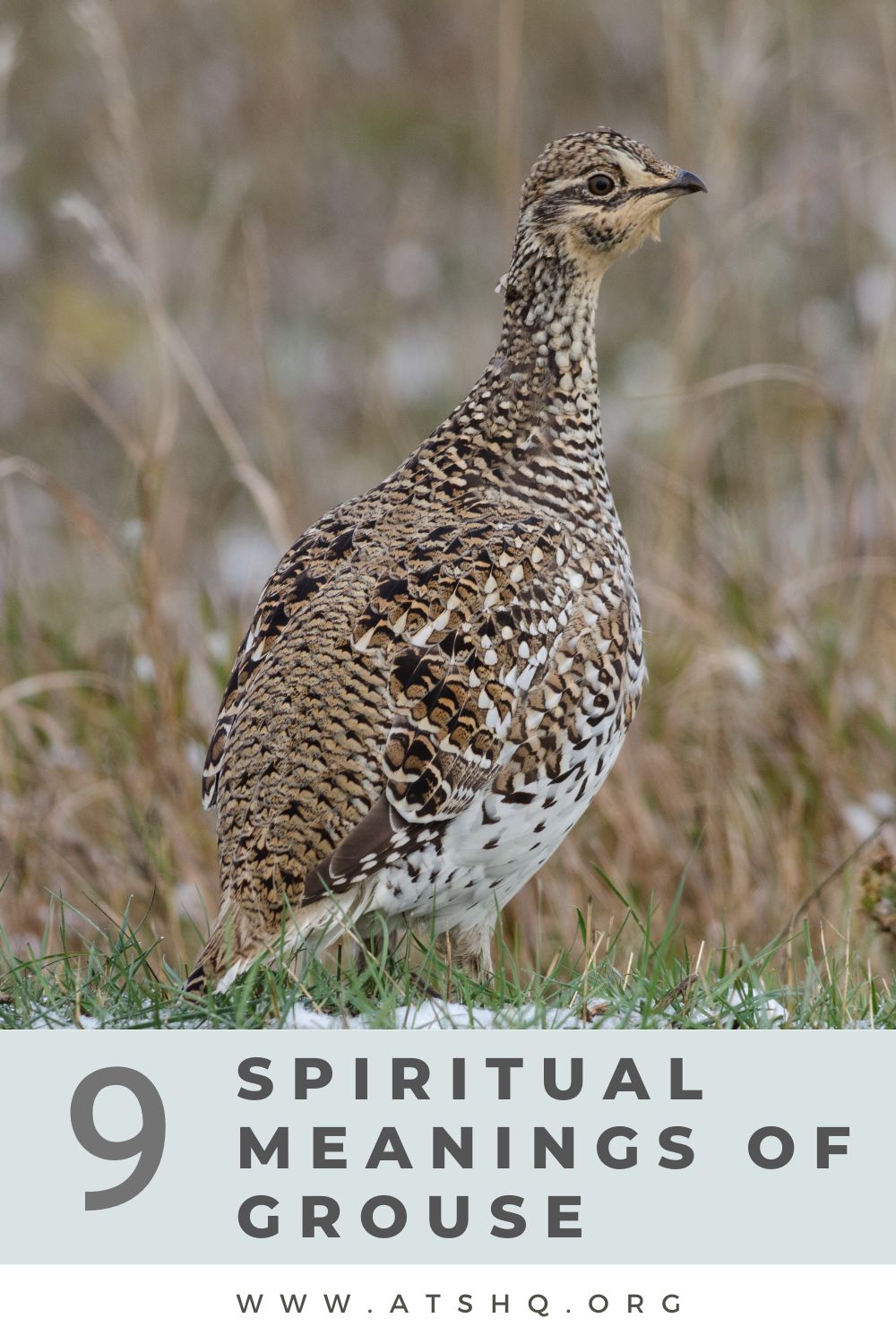 Facts About The Grouse

A grouse is a small bird from the family Phasiandie related to chickens, partridges, and quails. It is a game bird, often hunted by humans. In 1708, it was hunted so much that a poaching ban was placed on it in New York.

It is mainly found in cold and snowy areas, like Canada, some other parts of North America, the arctic, and the subarctic.

Grouses are territorial and can be aggressive when their territory is threatened. The grouse regard their region religiously regardless of where they are. Males typically occupy approximately 7.5 acres of land.

The territory of one or two nearby female grouse overlaps with that of the birds. Although they are easy prey for human hunters and predators, these birds are very adaptable and can overcome challenging situations.

For example, some foods that are toxic to other birds are easily digestible by grouses. Also, they grow foot projections during the winter to help them navigate their way and move quickly.

They are also not very social and would often move solo except when it is time for mating. They are known for the rhythmic drumming sounds made by flapping their wings as a mating call.

The grouse is a type of bird known for its elaborate mating rituals. During the breeding season, male grouse will congregate on a lek, where they will strut and dance to attract a mate.

One of the most dramatic aspects of the grouse dance is the popping sound that the males make by inflating their air sacs. In addition to making noise, the males will puff up their feathers to appear more significant and impressive.

Grouse As Your Spirit Animal 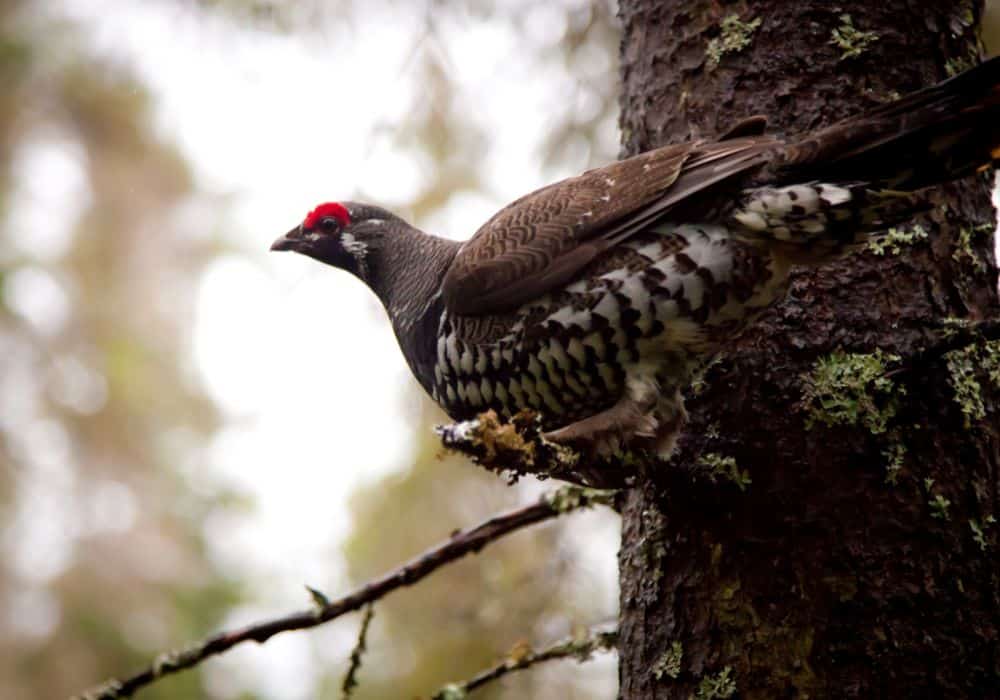 If you have a grouse spirit animal, then it means you are introverted, resilient, and very cautious. You can be shy and will often stick to small crowds.

Whatismyspiritanimal.com says if the grouse is your spirit animal, you can’t go on a social spree for long; you always need a break. You are often picky in choosing friends because you seek to find good people who wouldn’t hurt you.

You are also inventive, and conformity to social expectations is not your thing. If you let someone with the grouse as their spirit animal be free, you’d find that they are creative and problem solvers.

Although they might be introverted and antisocial, they are lively, and only those very close can see this side of them.

Like the rhythmic drumming of the grouse wings, music is a vital part of their existence. They are big-time music lovers.

Grouse As Your Totem Animal

Those with the grouse as their totem animal are always vigilant and searching for honesty and justice. They tend to question people’s intentions and actions. They are exceptionally watchful and can turn to paranoia and anxiety if not kept in check.

However, if kept in check, this attribute is a great strength as they can discern very quickly between good and evil. They are also able to tell when someone is dishonest and unjust.

Having a grouse as a totem animal means you are honest, just, and good. You are not easily fooled and deceived by the front anyone puts on to trick you. Even though you might be shy, you gain confidence by doing good and standing up for what is right and against those who have done wrong.

Grouse As Your Power Animal

The grouse is adaptable and resilient. Although it can be underestimated most times, in dire moments, it brings out its big guns and survives.

The grouse being your Power animal means that many might not think that big of you, but when the need comes, you can pull through no matter what.

You are an optimist and always make the best of every lousy situation thrown your way. You remain calm and collected no matter what because you know you can overcome it.

If your energy bar is nearing empty and you feel low, all you have to do is call on your grouse power animal, and it will be alright.

Meaning Of Dreams About Grouse 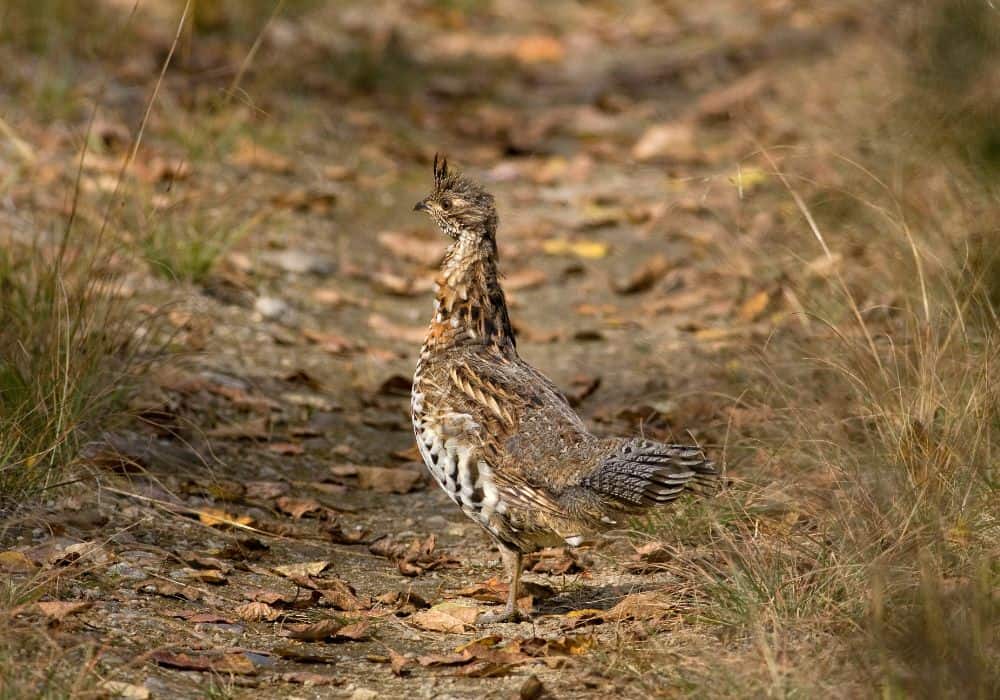 If you have encountered a grouse or multiple grouse in your dream, it could mean different things, depending on their number, actions, or their form when they appear in your dream. The meaning also depends on you.

If you see a pair of grouse in your dream, it has something to do with romance. If you are involved with someone romantically, it could mean progress in your relationship, and you are most likely approaching a huge milestone.

However, if you are single, it probably means that a love interest is near, and you should open your heart to receive them.

Also, seeing a pair of grouse nesting together can signify that you don’t need to search for the one anymore, as you have found your soulmate.

A dancing grouse in your dream means that someone has their eyes on you and tries to get you to notice them.

According to whatdreamsmeans.com, if you are chasing a grouse in your dream, this could mean that in the near future, you will face temptation, and it is up to you to decide if it is worth giving in to the temptation.

If you see a grouse approaching you in your dream, then it is a sign of good luck. It means that opportunities, mainly in the business sector, will present themselves to you very soon.

When the grouse moves away from you in your dream, or two grouses go their separate ways, the relationship between you and a friend might end or become strained over time.

Releasing a caged grouse shows that you are ready to let go of something that you finally accept is beyond control, and you are ready to move on. And if you see a group of grouses partying, it means soon; there will be a celebration in your life.

Meaning Of Grouse As A Tattoo

If you wish to get a grouse tattooed on your skin, or maybe you have seen someone with a grouse tattoo, and you want to know the meaning, there could be different meanings attached.

Like in dreams, it all depends on how many grouses there are and what the grouse are doing.

A tattoo of two grouses in a nest is attached to something romantic. Maybe the person has found their soulmate, or they just marked a huge milestone with the person they are currently in a relationship with.

Showing that just as the mother grouse is ready to sacrifice herself for her brood, the person bearing the tattoo is willing to do the same for their loved ones.

A tattoo of a grouse could also show that the person bearing the tattoo is a music lover and places music on a high pedestal.

It could also mean that although someone is often underestimated, they know their inner strength and precisely what they can do. 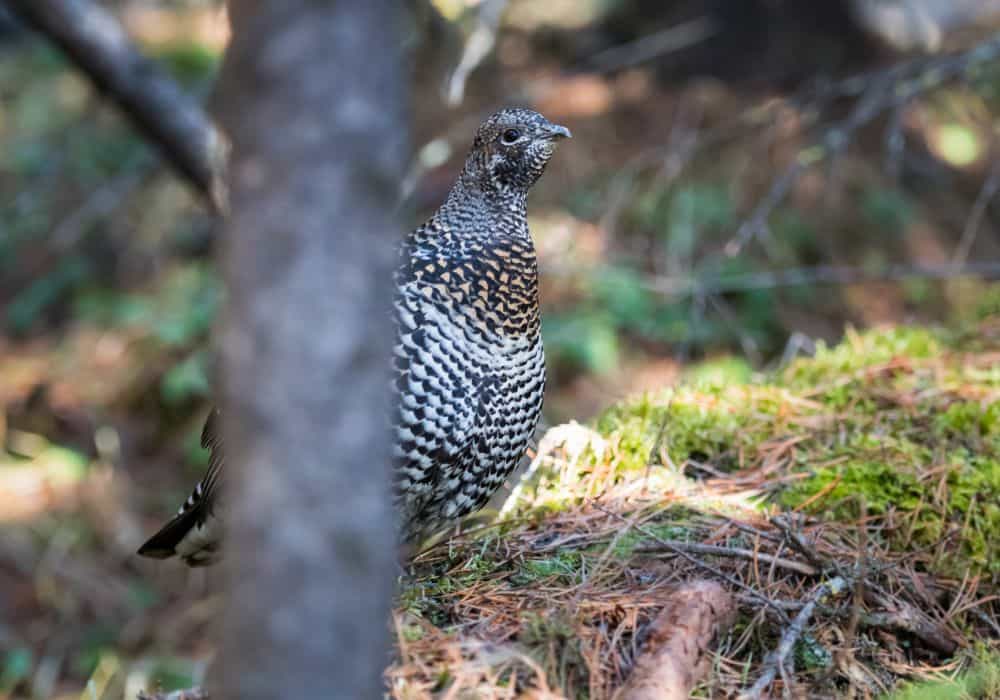 In Native America, the grouse is depicted as a righteous warrior, symbolizing justice and revenge.

The grouse is also used as an animal clan for some Native American tribes. The Chippewa tribe has a Grouse Clan, the grouse totem is called Aagask, and the Mandan and Hidatsa tribes have Prairie Chicken clans.

Some Northwest Coast tribes, such as the Tsimshian, use grouse as a clan crest, and it can occasionally be found carved on totem poles.

Native-languages.org says that in most Native American Legends, the grouse was never mentioned, and this could be traced back to the fault of early translators who mistook them for partridges.

However, Partridges were not native to Native America and, in fact, only appeared there in the early 20th Century.

In most Native American mythology, the grouse is depicted as a character out for revenge and justice.

The famous Pulowech (ruffed grouse but often mistranslated as partridge) from the Mi’kmaq folklore, for example, is a grouse that is out to seek revenge for his murdered wife.

In Kalispel’s myth, ‘Flying Past Between Legs’ and ‘Flying Past Head’ are two Willow Grouses out to seek revenge from the fox that killed and cooked their children.

Nordic Symbolic Meaning Of The Grouse

In Nordic cultures, the grouse represents hidden treasures and a reminder to respect forest creatures. A grouse can sometimes be a forest deity in disguise, so killing one is terrible, but helping them can bring good luck.

Mythology told by old Nordic people depicts the wood grouse as a troll woman who has turned into a bird. She is often cranky and unpredictable.

While she can be excellent and helpful sometimes, she is mischievous and causes havoc. Her feathers are said to have healing powers.

Scottish Symbolic Meaning Of The Grouse

In Scotland, the grouse is a bird that lives in a lovely heather field but finds it difficult to stop worrying and fretting about the future. Despite having food in abundance, they still fear that they will suffer and starve to death, which leads to many quarrels amongst themselves.

In Scottish culture, the bird teaches a lesson about unnecessary thriftiness and failing to recognize your good fortune when they are right in front of you.

Finnish Symbolic Meaning Of The Grouse

There is a much more positive outlook on the grouse in Finnish Culture. The bird is a representation of compassion and trustworthiness and also is a fantastic teacher.

Famous Finnish folklore that features the grouse is the story of The Enchanted grouse and Little Locked Box, where after a man spares the life of a grouse while hunting, he takes the grouse in and cares for it for three years. He is then rewarded with a castle, servants, and many riches.

There is a lot to discover and learn about these fascinating wild fowls. It doesn’t matter if you have been dreaming of them or if they are your totem or spirit animal; the enlightenment is worth it.

Usually, these animals seem nothing out of the ordinary, just timid game birds. However, on further study, you’d learn that you can’t judge this territorial and resilient bird just by its appearance alone. Please comment to let us know if you have any questions!