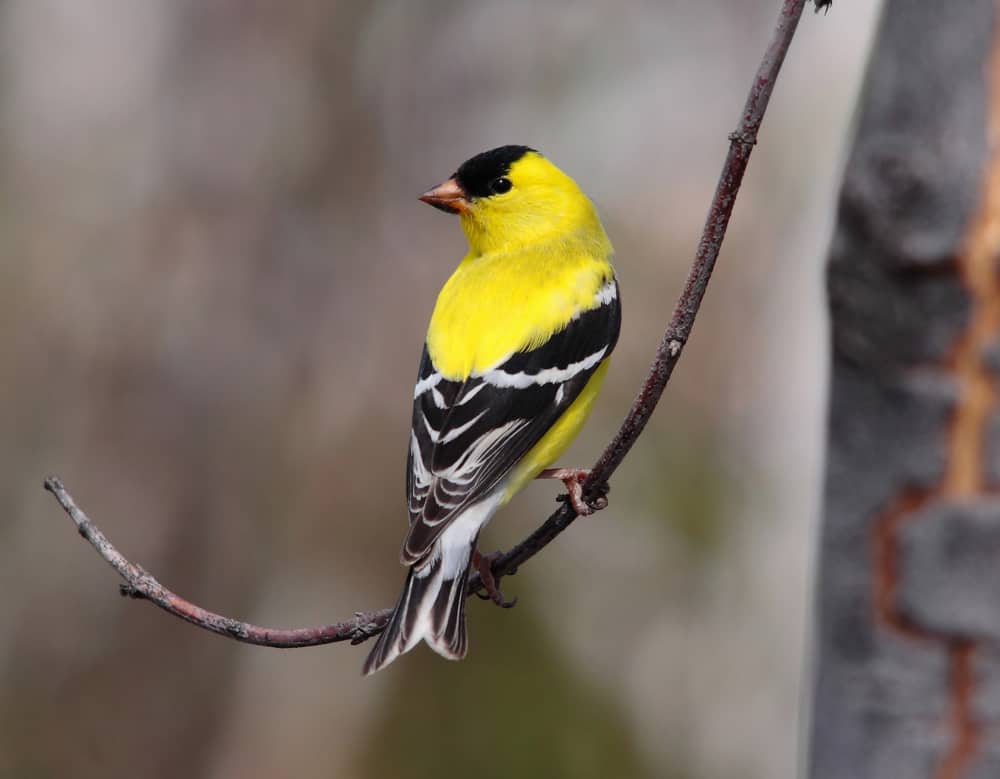 Although incredibly small, the goldfinch is a bird of immense power and symbolism, representing good fortune, health, and innocence.

It’s no wonder their beauty and song have inspired countless works of art throughout history. By invoking them as a power or spirit animal, you can be rewarded in several critical areas of your life.

Today, we’re going to explore the rich history of the goldfinch, including what they represent and how you can interpret their visits to you. 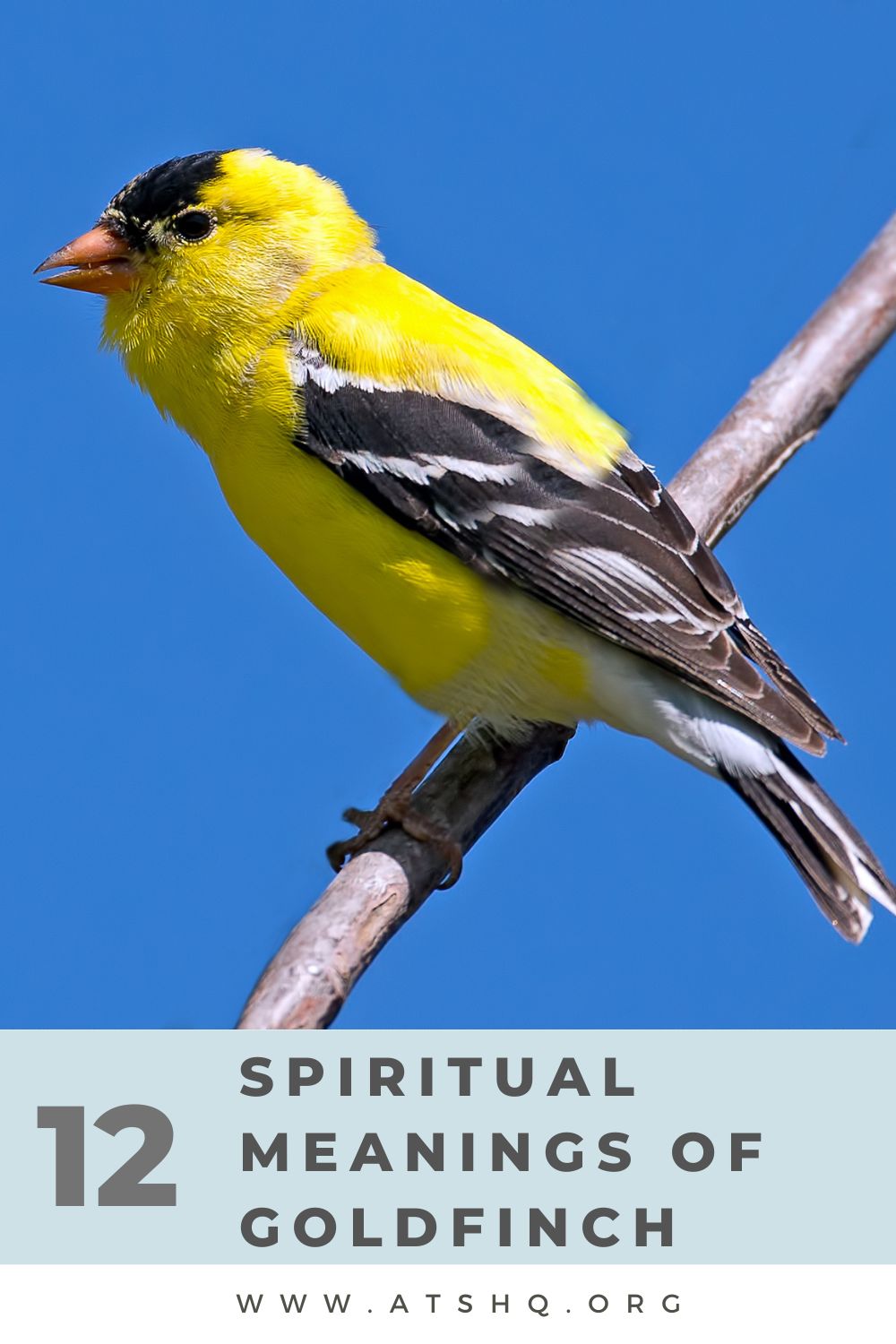 Think of a spirit animal as a guide who protects you on your journey. Both you and your spirit animal will share many characteristics that connect you.

The goldfinch has several significant attributes that make it a helpful spirit animal to have in your life. The first and most apparent is its’ beautiful, radiant feathers.

Multicolored animals like the goldfinch invoke optimism, happiness, and success in people. They are attracted to well-rounded individuals who have multiple sides to their personalities and are incredibly likable.

The color gold, which gives this bird its signature name, signifies your purity and vitality. Gold is also a symbol of wealth and ownership. But this doesn’t necessarily only relate to money.

Like the goldfinch, you could be wealthy in other ways. For example, these birds feed on several medicinal plants, like thistle plants, which humans have used for centuries to cure diseases. It’s thought they symbolize incredible health, inner peace, and resilience against sickness.

The red color around the goldfinch’s eyes symbolizes your passionate and loving side. You are always on the lookout for new opportunities. All the while, the bird’s brown plumage keeps you grounded to the earth.

The goldfinch is also a famous songbird whose tune is revered worldwide for its sweet melodies. This voice is a natural symbol of talent, creativity, and inspiration.

Totem animals symbolize the person you are. Naturally, birds are strong and carefree animals with keen senses and the ability to soar high in the sky for adventure or to escape danger.

But the goldfinch has some additional significance which can be especially useful to you as a power animal.

Firstly, goldfinch often builds their nests at the end of swaying branches. While this may seem dangerous and overwhelming to some, the goldfinch is an expert in self-preservation. Invoke the goldfinch to steady your foundations and weather any storm that tries to take hold of you.

Although the goldfinch has beautiful colors, most adults will molt after the breeding season. Feathers will come back duller and muted until the new tips wear away.

This transformation is a source of power within the goldfinch. It can help you realize and execute changes and rebirths in your life. Need a new direction? A new path to follow? The goldfinch can help you in these decisions. But do not worry; your colorful feathers will always return in the new season.

The goldfinch is an incredibly feminine totem animal to invoke. The females do a lot of the heavy lifting in relationships, including building their nests on their own and incubating eggs. This feminist spirit can grant you incredible inner strength and independence. Its nurturing power can be incredibly potent to expecting mothers.

We invoke power animals when we need special skills or qualities to overcome trying times. And though it is small, the goldfinch is a competent ally by your side.

The goldfinch is also linked heavily with all types of wealth, be it money, health, knowledge, or relationships. You can rely on this tiny bird to improve several areas of your life and channel its pure heart to get what you deserve.

That said, the goldfinch can also symbolize existing wealth. The goldfinch may want you to evaluate what you already own – and be grateful for it. As a songbird, its melodies are often celebrations. You may have plenty to feel happy about already.

As a power animal, the goldfinch is resourceful. It is capable of drawing on its natural surroundings to thrive. Despite nesting in swaying branches, the bird creates sturdy nests from various materials, including mosses, lichens, twigs, and plants.

These strong foundations are a powerful symbol for anyone wanting to start a family or who may want to stabilize an irregular period of their life. Draw on the goldfinch to find solutions from your everyday life. Perhaps the answers you’re looking for are all around you.

Goldfinches can also be powerful symbols of fertility. Despite being small, they can brood up to 3 batches of eggs a year, and both parents feed their young chicks until they become independent. Invoking the goldfinch can help you and your partner unite over family planning decisions during maternity.

Because of its common depictions in art, literature, and music, as well as being a popular pet to own, the goldfinch is a regular spirit animal that appears in dreams. But what exactly does this mean?

Like all birds, the goldfinch has a natural affinity to the element of Air. When seen in flight, it symbolizes pure freedom and independence. As a songbird, this pairs well with Air – you spread positivity wherever you go.

Many goldfinches are kept as pets in cages. But cages are problematic – they often symbolize entrapment and threaten our freedom. Additionally, when in captivity, the goldfinch often mimics the song of other birds in captivity.

They eventually lose their own signature sound. In your dream, if the goldfinch is living with other birds, this could be a stark warning that you are dimming your shine by the company of friends you keep.

A flock of goldfinch can symbolize you’re in harmony with your community. It also shows that you enjoy self-expression and creativity and also love to welcome new people into your life.

Finally, the color of the goldfinch in your dream is very significant. Although they boast beautiful feathers for most of the year – they go through a period of molting and become incredibly dull for a short while.

An entirely brown goldfinch symbolizes you are currently in-between rebirths. Perhaps you aren’t feeling yourself and have ‘lost’ your shimmer. Don’t worry – this is only temporary. The goldfinch is an optimistic spirit, and you will grow a brand new shine in time. Your colors will return to you. Ressurection is close. Be patient. 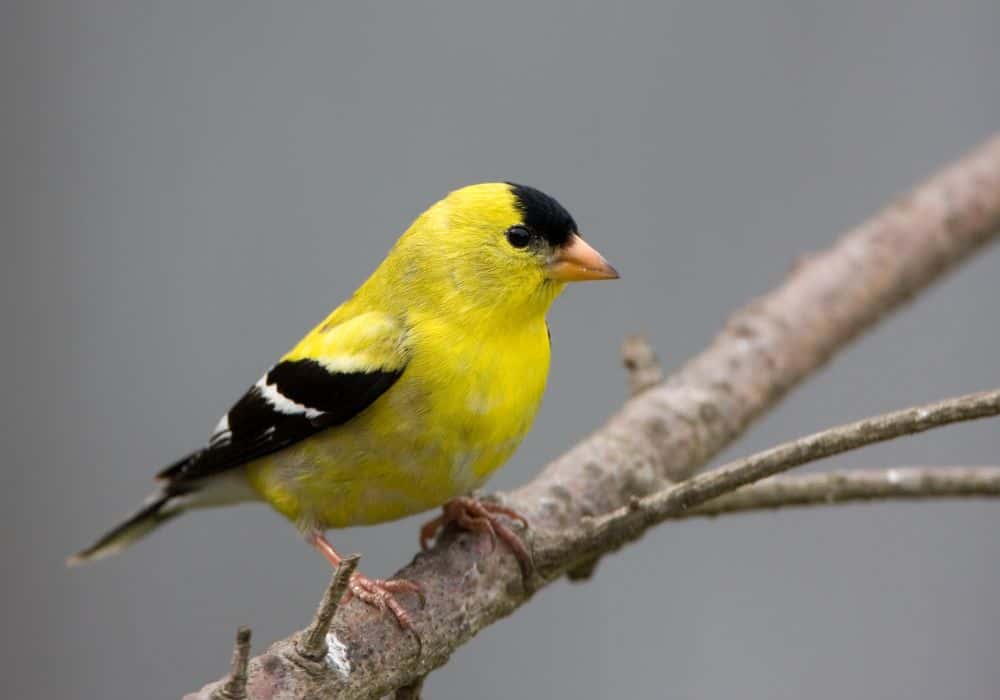 Goldfinch as an Omen

Omens are significant events that are connected with powerful symbols. And since goldfinch regularly visits bird feeders and gardens, especially in the wintertime, the chances of seeing one are incredibly high.

So what do they foretell? Thankfully, goldfinches signify good fortune, positivity, and harmony.

These birds will only visit bird feeders and gardens with nutritious, high-quality seeds. If they frequent your garden, it’s a good indication that you offer safety, security, and positive energy. The goldfinch will repay your kindness tenfold.

As a herald of good fortune, their sweet tune can inspire creativity and harmony in even the most trying days. Keep an open eye and ear for the goldfinch – they are a welcomed omen.

The goldfinch features prominently in several mythologies, cultures, and world religions across North Americana and Europe. The consensus is that this bird is a beacon of hope, inner peace, royalty, and innocence.

Let’s take a quick look at some of the meanings we can draw strength from:

The Goldfinch is one of the most popular animals in Christian symbolism. It is most commonly used as a sign of persistence, endurance, and the Passion of Christ.

One of the core scriptures that mentions the goldfinch states that it was a sacred bird that tried to pluck the thorns off from the crown of thorns on Christ’s head as he journeyed with his cross. This is how the goldfinch got its signature red colors on its face.

Throughout history, the goldfinch was a warning symbol to Jesus of his future execution. For example, Raphael’s Madonna of the Goldfinch shows John the Baptise gifting a goldfinch to Jesus as a forewarning of the crucifixion.

In Madonna and Child by Cima da Conegliano, the goldfinch is held in the hands of Christ as a child, contrasting his child-like innocence with his future fate.

In general, Celts often regarded birds as symbols of freedom, liberation, and messengers from the gods. Their feathers often adorned cloaks, as they already had a ‘patchwork-like appearance with their different colors.

But the goldfinch has significant symbolism in Celtic mythology and language, given its presence in Celtic countries. The Irish word for Goldfinch is Lasair Choille, which translates as ‘flame of the woods,’ highlighting the beautiful colors the bird brought to forests across the island.

The goldfinch symbolized the Celtic goddess Brigid, known for her healing powers and creativity. In Catholicism, the modern-day St. Brigid has her feast day on February 6th; the goldfinch is still used in these celebrations. 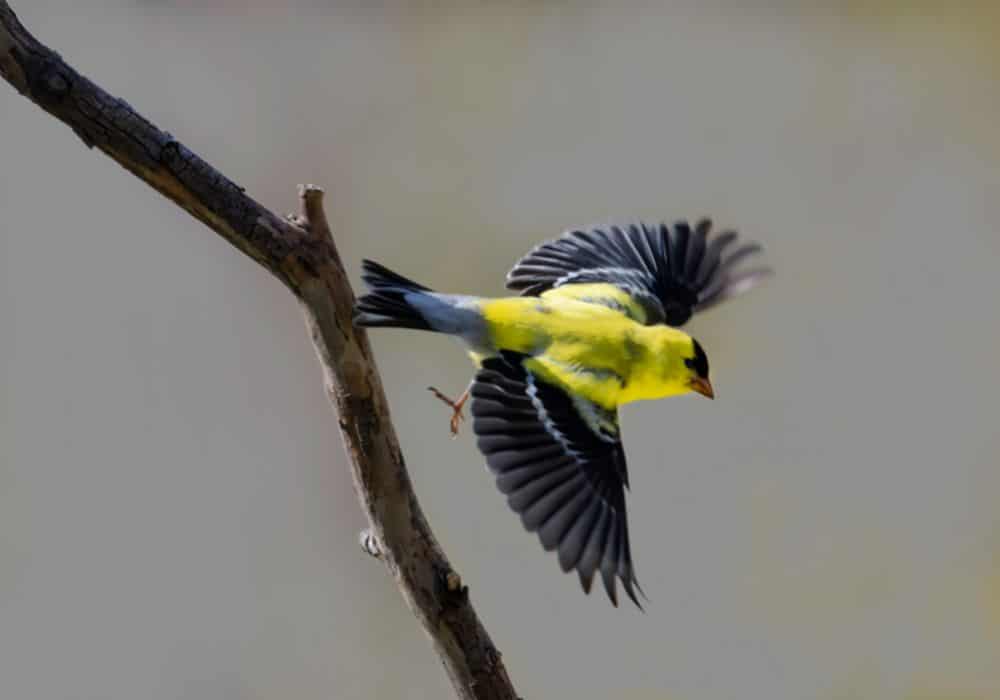 The Anglo Saxon word for goldfinch was thisteltuige, which translates into the modern nickname for the goldfinch, thistle tweaker. The birds ate thistle seeds, commonly used to combat any plague or contagion. The goldfinch was typically symbolized as a ward of medicine, good health, and battling disease.

Native Americans have immense reverence for birds, frequently linking them with divinity. Since the American goldfinch differs from the European species in that it is primarily golden with black wings, Native American symbolism focuses on the bird as being connected with the sun.

Its bright plumage was a sign of warmth, growth, and kindness. Many Native American myths depict the bird as a kind, selfless animal, and gifting someone their feathers was a way of honoring that person’s generosity.

In one creation story, a group of small birds helps the Fox regain his sight after a trick was played by the coon. To reward the small birds for opening his eyes, he painted them in the sun’s image. This goldfinch was so happy with its colors that it learned to sing beautifully.

The goldfinch was regularly worshipped in Ancient Egypt. Many believed they acted as both messengers from the gods and represented the souls of recently deceased family members.

Seeing a goldfinch visit your home was considered a blessing from a higher power and symbolized your ancestor’s triumph in the afterlife.

Similarly, in Greek mythology, the goldfinch symbolized rebirth and the human soul traveling to another plane.

Several myths also used the goldfinch as a symbol of innocent. The most popular is when Athena transforms Acalante into a goldfinch after she confesses to killing it without cause.

A wide variety of finch was celebrated across China as good omens. When a goldfinch visited your home, you were receiving a blessing of good fortune and health. This largely came from how small, and agile the bird was – it regularly escaped detection, traps, and nets and had few predators.

Although the goldfinch is one of the smallest birds in the animal kingdom, its symbolism cannot be underestimated.

They are caring, kind, and passionate spirit animals whose presence invokes wealth, peace, and prosperity in you. Their multitude of colors and air elements also reinforce the free spirit of the bird.

Invoking the goldfinch can give you a considerable boost in stability and the power to weather any storms. And because the female is such a strong, capable and resourceful bird, they are often a sign of women’s empowerment and motherhood.